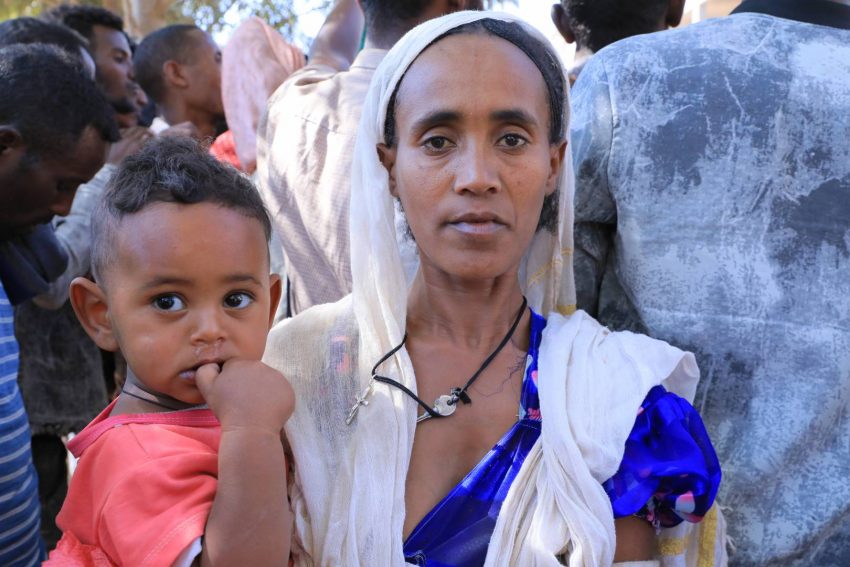 Leges, a mother of six children, stands in a camp for people displaced by the northern Ethiopia conflict, where ongoing violence has deepened a humanitarian crisis. Leges says she hid her children in the forest for six days and traveled on foot for another six days before they settled in the camp in Shire, Ethiopia. “I just rushed to flee leaving behind my house and all my properties to save my children’s and my life,” Leges says. “I hope one day we would be back in our home. … I came here expecting at least to get food, water, and shelter. Unfortunately, I am getting little or no food.” (©2021 World Vision/photo by Fitalew Bahiru)

In northern Ethiopia, the humanitarian crisis is growing deeper and wider. Ethiopia’s Tigray, Amhara, and Afar regions are facing dire conditions as ongoing conflict drives children and families from their hometowns.

After a year since fighting broke out in Tigray in November 2020, persistent access issues have restricted the delivery of aid, increasing child protection concerns, humanitarian needs, and emergency levels of malnutrition and food insecurity. According to U.N. reports, the affected population has now increased from 5.2 million to about 7 million, with more than 2.4 million people internally displaced. The numbers are expected to rise.

“We were caught up in crossfire of heavy armament shelling,” says Yonas, a 12-year-old boy whose family escaped conflict in his town of Shire.

Yonas joins a growing number of children who need food, access to clean water, and shelter as they seek refuge in camps throughout Ethiopia.

The third grader says he walked for nearly 60 miles to reach a village, where houses were set ablaze — like his home was — before he and his family traveled to a camp for displaced families in Mekelle, Ethiopia. “I have been experiencing severe thirst. … There is no water, no food,” he says.

Children like Yonas face increased risks of hunger, abuse, and separation from their parents as they’re displaced in Ethiopia or flee as refugees into neighboring Sudan.

Before conflict erupted in November 2020, families struggled with decimated crops, food shortages, inflated food and fuel prices, and an overburdened healthcare system due to recurrent drought, desert locust, and the spread of COVID-19.

World Vision is deeply concerned for the safety and well-being of children made extremely vulnerable by the ongoing conflict. We’ve helped more than 1.5 million people, including 628,100 children, so far with services such as access to clean water, food, and emergency shelter in northern Ethiopia. And we’ll continue to deliver life-saving aid and promote healthy sanitation and hygiene behaviors.

FAQS: What you need to know about the northern Ethiopia crisis

Explore facts and frequently asked questions about the conflict and resulting crisis, and learn how to help refugees and displaced families within Ethiopia.

The northern region of Ethiopia has been one of the poorest areas in the country long before the recent spike in violence. Hundreds of thousands relied on food assistance even under good harvest seasons. Prior to the conflict, more than 1 million people in the region needed aid and more than 600,000 people were hungry, according to the United Nation’s Office for the Coordination of Humanitarian Affairs.

“There were already hundreds of thousands of people reliant on food aid. This was only exacerbated when desert locusts ravaged parts of the country, further depleting food stocks for many vulnerable families,” says Karmen Till, senior director of operations for World Vision in Ethiopia. “In the midst of the COVID-19 pandemic, erratic rainfall, and localized flooding and drought, the recent wave of insecurity and displacement in Tigray has only deepened the suffering of too many vulnerable people.”

Extreme violence and abuse; looting; food shortages; destruction of hospitals, clinics, buildings, and schools; and closure of banks are driving vulnerable families to flee their communities.

“Many vulnerable families face a long and difficult road to recovery — all while their future is uncertain and unstable,” Karmen says.

The conflict is the latest in a string of disastrous events for the country — the COVID-19 pandemic, ongoing desert locust and armyworm plagues, and erratic rainfall that has resulted in flooding and drought. These are compounded by the displacement of more than 3 million people due to ethnic violence in recent years.

How many northern Ethiopian refugees are there?

The conflict has displaced more than 2.4 million vulnerable children and their families from their homes.

How can I help northern Ethiopian refugees displaced in Ethiopia?

How is the northern Ethiopian crisis affecting children?

About 7 million children and adults are in need of humanitarian aid in the region, where hunger, illness, and violence threaten their safety. According to UNICEF, 2.7 million children are out of school due to prolonged disruption of schooling because of the conflict in the region. World Vision is deeply concerned for the safety and well-being of children affected by the northern Ethiopia crisis.

What is World Vision doing to help people affected by the northern Ethiopian conflict?

After the war began in Tigray in November 2020, World Vision was one of the first nongovernmental organizations to respond with need assessments and aid delivery in the conflict-affected region.

Our teams in Ethiopia are coordinating with other humanitarian organizations to provide displaced families with food, emergency shelter, and non-food items, access to clean water, and sanitation and hygiene facilities. We’re partnering with healthcare facilities to ensure families have necessary supplies, providing support to rehabilitate damaged schools so children can learn in safe environments.

World Vision has provided more than $450,000 in multipurpose cash assistance to vulnerable families most affected by the conflict. Cash assistance helps address the immediate needs of children and internally displaced people.

Leteberhan, a 45-year-old mother, expressed gratitude for being able to use the cash to buy nourishment for her five children. “Thank you very much for providing us with this cash support,” she says. “I will buy some foodstuff from the market to feed my children.”

Since November, World Vision has helped:

How much programming does World Vision have in northern Ethiopia?

For 21 years, World Vision has served the most vulnerable people in the northern region of Ethiopia. There are 19 projects in Tigray and Amhara supported by grants and generous donors. World Vision supports 45,373 sponsored children in Tigray and Amhara, where we’re implementing integrated programs including clean water, sanitation, and hygiene behavior change (WASH), livelihood and food security, education and life skills, health and nutrition, child protection, and community engagement through child sponsorship.

The generosity of World Vision sponsors impacted more than 6.5 million Ethiopian children and families in 2020 with food and nutrition; education; clean water, sanitation, and hygiene; and healthcare. Programs helped improve the livelihoods of farmers, lower neonatal death rates, and create more access to nutritious food and sustainable income for nearly 600,000 people in rural communities. Since the recent conflict, we have supported more than 1.5 million people in the region with essential supplies.

“Our response prevents further destruction and death and contributes towards a sustainable and just peace,” Edward says.