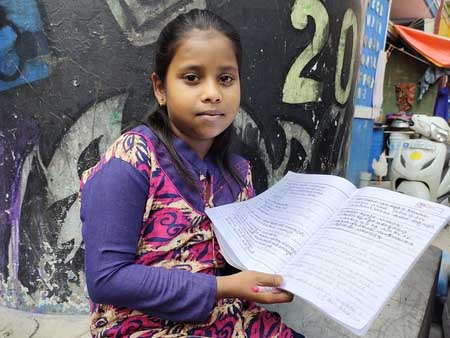 Ashmitha holds her notebook. After losing her father to COVID-19, she wants to study to be a doctor so she can save lives. (©2021 World Vision/photo by Luke Aslaksan)

When many schools in India closed at the beginning of the COVID-19 pandemic, children began to study at home. “It’s almost like a vacation time,” says 9-year-old Ashmitha, a fourth grade student. It was a silver lining amid the global health crisis.

Her family lives in the slums of Bangalore, India, and Ashmitha was happy to spend more time with them, especially with her father, Murugan, 40. He worked as a daily wage laborer in an incense-stick–making company. Ashmitha’s 38-year-old mother, Amudhavalli, works as a maid in a few houses, and she earns a small income to support the family. Ashmitha’s older sister, Dhanalaxmi, is in sixth grade.

Since the pandemic began, Ashmitha stayed inside the house until her father returned from work every day. “I used to eagerly wait for it to be evening so that I can go out for a walk with my father,” she says. “He would also buy me snacks and toys some days.”

But it didn’t continue for long. Murugan soon started showing symptoms of COVID-19. “He started to cough severely and was getting fever and tired often,” says Amudhavalli. He was so tired that he was unable to take Ashmitha out like before.

Because Murugan was the main source of steady income, he downplayed his health issues with his family so he didn’t scare or worry them. He took over-the-counter medicine and hoped to recover. Instead, he got so sick that Amudhavalli and some of their relatives eventually had to take him to the hospital.

There, the family was shocked to learn that his oxygen level and pulse had fallen dramatically and his lungs were fully infected. “Doctors hurried us to take him to any other hospital immediately as they were running short of oxygen beds,” says Amudhavalli.

Most of the hospitals were already full of patients. New admissions like Murugan could be taken only if somebody in the hospital died or got discharged. They took him to 10 hospitals in one day but were unable to find a single bed. Finally, they found a bed in a government hospital in the city, but the price was more than she could afford, so Amudhavalli had to borrow about $542 from others.

A day passed. The family had a moment of hope when they were allowed a few minutes to see Murugan as he was lying on the bed with the oxygen mask. Another day passed, and Ashmitha and her family returned home, expecting her father to recover and eventually return as well.

But the next day became the family’s worst day. The hospital called, telling them that Murugan had died due to the oxygen shortage. The more painful news for them was learning that Murugan’s body would be cremated immediately as per government procedure, and the family was not allowed to say a last goodbye.

Ashmitha couldn’t imagine the absence of her father. The sweet aroma of incense on Murugan when he returned home from work used to make her happy. But it still seemed to fill the house, instead kindling painful emotions and memories for Ashmitha and the family. Ashmitha continues to study, but now she wants to be a doctor to save lives.

Ashmitha’s family is in dire need of support. Their routine has become a question of survival due to incomprehensible suffering and fear because of the pandemic’s second wave in India.

In 2020, during the first wave of COVID-19, World Vision was able to support 5,000 families in Ashmitha’s community and a few other locations across Bangalore, India, by providing 5,000 packages containing a week’s worth of meals and nearly 50 pounds of dry rations, which includes rice, wheat, and dhaal. World Vision also distributed 8,000 masks and sanitizers to the city’s frontline workers. Throughout India, we’ve helped 4.8 million people through our global COVID-19 response since March 2020.

As the second wave of the coronavirus ferociously hits India, the numbers of cases and deaths are rising higher than ever before. World Vision is raising funds to scale up our support for hospitals and community centers, including providing oxygen concentrators to help with the shortage. World Vision also needs supporting hands to help Ashmitha’s family and many more like hers as well.

With your support, we can help families across India during their time of greatest need.

Help people made more vulnerable by the coronavirus.