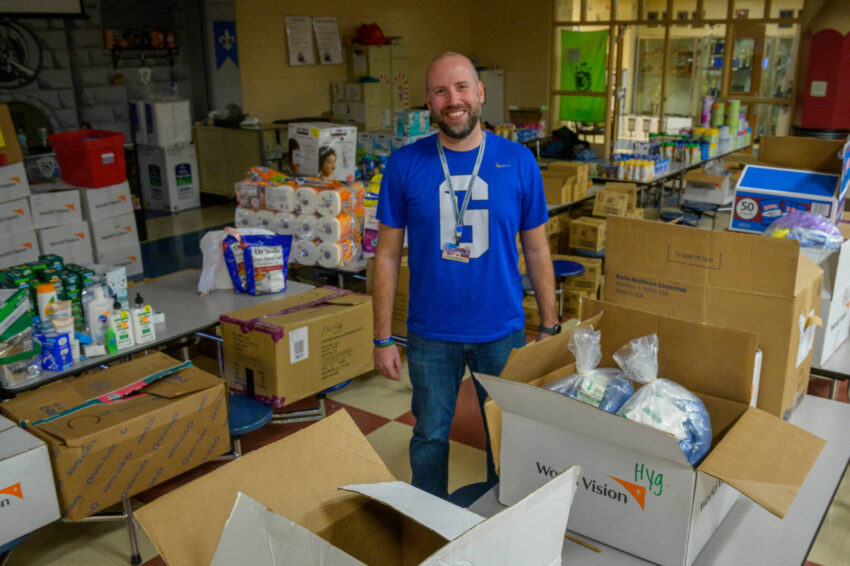 “My parents instilled in me from a very young age that you do, because God’s blessed you to be able to do. If somebody has [a need] that needs to be met, meet that.” (©2021 World Vision/photo by Laura Reinhardt)

Stephen Queen lost his father, a Baptist minister, to COVID-19 in November 2020. “He was a great man,” says Stephen.

More than a year after his death, the thought suddenly struck Stephen that he should get his dad’s Bibles — the ones with his preaching notes written in the back — and read through them. Stephen lived near his mom so he could get them any time. But he felt an urgency to get them that day. That was Wednesday, December 8, 2021.

A couple of days after the storm, Stephen read these handwritten words in the back of his father’s Bible: “God has purpose in His plans. God is present in our pain.”

To Stephen, a school principal at Central Elementary School in Mayfield, Kentucky, those words resonated deeply. Mayfield was one of the hardest-hit communities, with few buildings in the downtown left untouched by the storm.

The school sits on the outskirts of town and was undamaged. That allowed Stephen, teachers, and members of the community to congregate there and provide supplies to the devastated community. One of the teacher’s husbands connected with a church in nearby Paducah, Kentucky who said to reach out if the school needed supplies.

After finishing up the first day of distributing supplies, the team knew they needed more nonperishable food items so they called the Paducah church. World Vision worked with the church to send supplies.

During times of disaster, World Vision relies on the local church and community organizations like Central Elementary to distribute relief supplies such as cleaning items, shelf-stable food, water, and children’s toys. Through a network of partners, World Vision can reach the most vulnerable.

Stephen sees God’s hands working to knit all these people together in a time of crisis.

Being a servant leader

And he wants to live into the example his parents both set for him — that of a servant leader. “We’re not here for a long time and so we need to do the best we can to be servants because that’s what we’re called to,” he says. “We’re to be the hands and feet of Jesus and everybody has their own gifts.”

Some of those gifts include being able to provide for others, especially during times of disaster.

“Thank you for being obedient,” he says to the people who donated. “God puts things in people’s heart. Not everybody can go, but everybody can do something.”

For Stephen, that something meant being there to help his hurting community. He greeted the truck filled with supplies when it arrived early in the morning. He marveled at the things they’d never even considered that they might need like solar lights and heaters. He hasn’t lived through a natural disaster of this magnitude. “World Vision knows this is what would be needed during that time,” he says.

The team of volunteers arrived and put together packages for people from the donated supplies and items they already had on hand. “It can leave you a little bit speechless what all’s come in,” he says.

In fact, he worried at first that they might have too many supplies. But that didn’t turn out to be the case. They were able to distribute almost all they received within a day. But there are still more needs.

As people continue to sort through what’s left of their belongings and begin the long process of rebuilding, the supplies and support needed will change.

Stephen thinks about his students. “Kids won’t forget that. If you lived through it, you’re never going to forget it,” he says. “Of course, you’re going to remember the tragedy, but you’re also going to hopefully remember the response. How the community came together. How people from all over the world reached out to help.”

And for Stephen, that might just be his dad’s words taking physical shape: God’s presence in our pain and His purpose in His plans.

He says. “There’s tragedy and there’s devastation, but I mean if you look hard enough, you can always find the good.”

When disaster strikes, World Vision is there. Help respond to tornadoes like the ones in the South and Midwest.