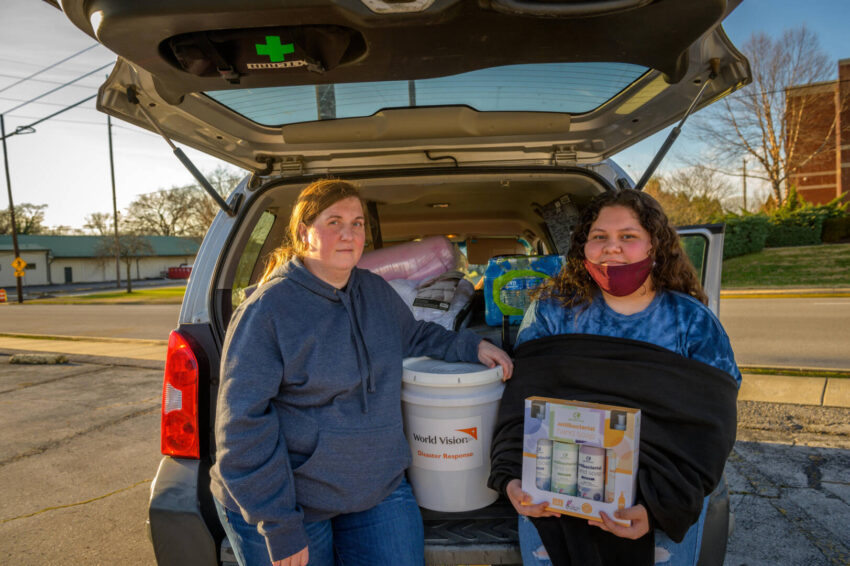 Nicole and her daughter Naida picked up some supplies to help their family after the tornadoes that hit Bowling Green, Kentucky. (©2021 World Vision/photo by Laura Reinhardt)

Nicole and her family of five hid in the bedroom of their newly purchased mobile home when a deadly tornado came barreling through Bowling Green, Kentucky, on December 10, 2021.

“It was terrifying,” says Nicole, recalling thoughts that flashed through her mind before chaos and destruction descended upon her community that evening. “The first thing we could think of is, a, we’re in a mobile home, which is really, really not secure at all and then, b, knowing that the only place we could actually hide was in our bedroom.”

Her family survived the harrowing ordeal as a string of tornadoes wrought a trail of destruction across more than 200 miles of the U.S. Midwest and South late on December 10 and early December 11, affecting hundreds of thousands in Arkansas, Illinois, Kentucky, Mississippi, Missouri, and Tennessee.

The tornado that struck Bowling Green damaged the back side of Nicole’s mobile home and knocked out power to the residence.

“Knowing that we just went through the financial burden of purchasing the mobile home, we haven’t yet put any kind of homeowners’ [insurance] on it, so any damage that was done is going to be [an] out-of-pocket expense,” says Nicole.

The storm was a devastating blow for the family who moved from Memphis, Tennessee, about a year and a half ago. They had been renting in the area and had just recently purchased their own home.

Then the tornadoes hit.

They have limited resources and funds available. Nicole and her husband, Alberto, are both recovering from COVID-19, having been hospitalized earlier this year. They’re continuing to experience long-term effects from the virus. Alberto has blood clots in his legs and has been unable to return to work.

A friend told Nicole about a World Vision distribution of relief supplies taking place at State Street Baptist Church in Bowling Green. Nicole and her 15-year-old daughter, Naida, were able to pick up some supplies they desperately need during this difficult time — cleaning supplies, hand sanitizer, an air mattress, and a Lego set for her youngest child, David.

She hopes the Legos will help David be able to play and take his mind off the tragic situation. In fact, it’s not limited to just him. Naida says that while kids her age gravitate toward electronic devices, she still would be entertained by the toys. Nicole sees them as a great stress relief, which is very much appreciated in these times of struggle.

Yet despite their troubles, the family thinks about what others are going through during this awful time. Nicole’s husband and David are out helping people by doing things like clearing debris.

As he sees some houses completely destroyed, David — who still believes in Santa Claus — asked, “How is Santa going to deliver the presents to all these babies or all these kids that don’t have a home no more?”

That spirit of thinking of others has deeply touched Nicole. She sees it in World Vision donors and the generosity of the supplies they’ve sent to the devastated communities in Kentucky. “I look at it [as] today for me, tomorrow for others. There may be times that I’m not struggling, and I can assist,” she says.

Naida says of the donations, “It just makes people feel like, hey, there’s always someone there for you.”

Nicole says that a huge source of strength is the support from the community. “Like everyone said, ‘Bowling Green is going to get out of this.’ We are going to come together,” she says. “It’s heartbreaking but it’s also a blessing that there are so many people that can come together and make things back to normal. It is going to take time, but there is hope because we’re not alone.”

Concern for families like Nicole’s is what has brought volunteers out to help distribute relief supplies.

Jay had been headed to the airport for a California vacation to celebrate his recent graduation from Western Kentucky University. But he says that doing that just didn’t sit well with his spirit “knowing everyone in my community is struggling to find somewhere to lay their head or find basic needs.”

“I was heartbroken. There was so much devastation,” says Tyreon, who’s also chosen to volunteer to help. He took that heartbreak and turned it into the perfect opportunity to give back to the community that raised him. And he’s brought his son, Jordan, with him.

“I want my son to understand what it means to show up for somebody,” he explains.

Tyreon isn’t the only one. Tiffany, a mother of five, brought her children to help set up a relief distribution. “We’re looking to be involved as much as we can in the community,” says Tiffany. “We’ve been out of electricity for four days, but that’s nothing compared to what everybody else is going through right now.”

Her five children work diligently alongside her carrying buckets of cleaning supplies that will be shared with people in need.

“We have God-given hands and we want to use them. We may not have funds to help, so this is our way of contributing,” says Tiffany. “I just want them to feel that fire in their heart. And I feel that this is their best way to experience that.”

Across the country, donors’ contributions are making a world of difference.

“You don’t even understand the amount of impact you’re having on our community,” Jay says. “We are immensely grateful and immensely thankful.”

As people come together and contribute in the best way for them, they can help tornado-stricken communities rise from the rubble and rebuild. And tornado survivors can know that they truly are not alone.

Sevil Omer of World Vision’s staff in the U.S. contributed to this article.