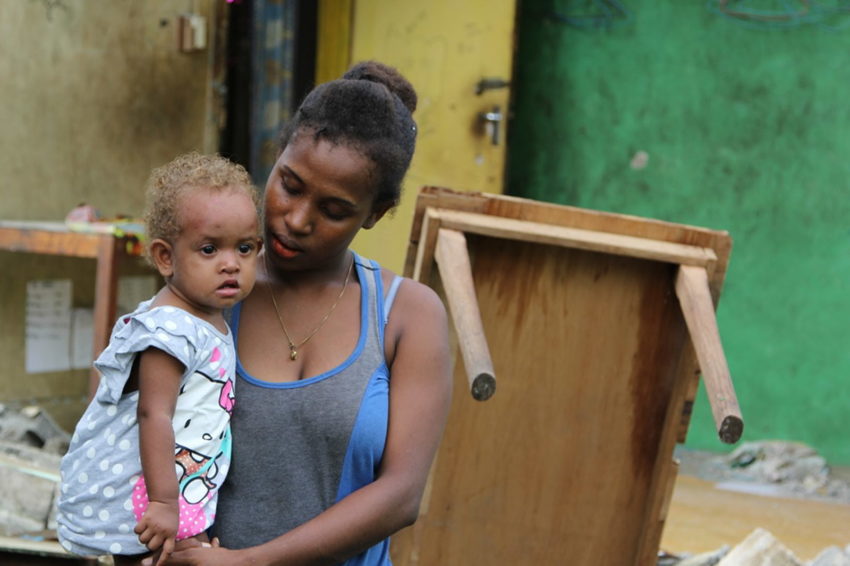 Zinnia Fagarh and her 1-year-old baby narrowly missed being hit by falling brick when the 2016 earthquake shook their home in Kirakira, Solomon Islands. “I heard people shouting and children crying,” she says. “Many people ran to the hills and we joined them.” By evening, her baby had a high fever. When they came down to visit the clinic, a powerful aftershock forced them to return to the hills, fearing a tsunami. (©2016 World Vision/photo by Mike Puia) 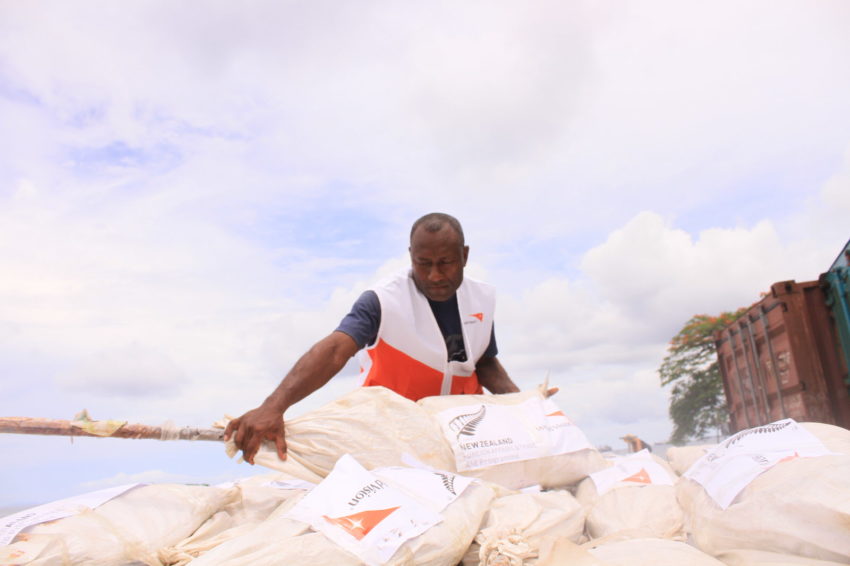 World Vision staff member Osbert Lalahu loads shelter kits on to a truck for shipment to Makira province for children and families affected by the 2016 magnitude-7.8 earthquake in the Solomon Islands. (©2016 World Vision/photo by World Vision staff)

Community members camp out in the hills of Temotu, the Solomon Islands’ easternmost province, after fleeing a tsunami that flooded low-lying islands. A magnitude-8.0 earthquake that hit the area on Feb. 6, 2013 triggered the tsunami. (©2013 World Vision/photo by Richard Qaai) 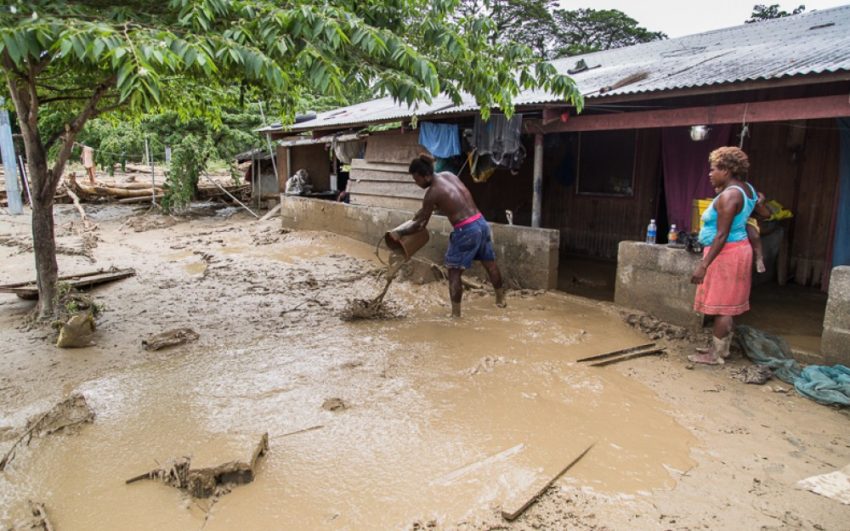 Villagers clear mud from their houses in the Guadalcanal Plains after 2014 floods. Heavy rain from a tropical depression, which later became Tropical Cyclone Ita, caused severe flooding at the beginning of April 2014. (©2014 World Vision/photo by Rachel Skeates)

A young man boils water over a fire during a disaster simulation in Tetupa, Solomon Islands. Six communities in north eastern Guadalcanal province participated in flood simulations to help them prepare for emergencies. These communities are particularly prone to flooding. (©2017 World Vision/photo by Langi Pitia)

The Solomon Islands, a nation of nearly 1,000 islands east of Papua New Guinea, is located on the Pacific Ring of Fire, where 90% of the world’s earthquakes occur. The islands are also prone to extreme weather and flooding. During the past decade, Solomon Islands disasters included cyclones, high tides, floods, earthquakes, volcanic eruptions, landslides, droughts, and tsunamis. The Solomon Islands is also vulnerable to rising sea levels.

Recent timeline of disasters in the Solomon Islands

FAQs: What you need to know about the Solomon Islands

Explore frequently asked questions about the Solomon Islands, and learn how you can help.

Are the Solomon Islands at major risk for natural disasters?

Yes, the Solomon Islands archipelago is vulnerable to natural disasters and disease outbreaks, including:

The Solomon Islands and Vanuatu are among the world’s most seismically active landmasses, second only to Japan. It’s not unusual for the Solomon Islands to have 60 to 70 earthquakes a year. Many of these are small shifts in the earth’s crust that may not be noticed, but there are also large quakes with many aftershocks.

Why do earthquakes and tsunamis occur in the Solomon Islands?

The Solomon Islands sit above a subduction zone where two tectonic plates — Australia and Pacific — meet. Their collision can cause forceful earthquakes and shifts in the ocean floor that generate tsunamis.

What other environmental hazards affect the Solomon Islands?

The Solomon Islands is experiencing rising sea levels that could have a devastating effect on agriculture. Already, soil erosion and saltwater intrusion into agriculture plots are diminishing the amount of arable land. With about 75% of the population involved in farming, that’s a grave concern. Increased levels of malnutrition — already a problem — could also result.

How damaging was the 2016 Solomon Islands earthquake?

A magnitude 7.8 undersea earthquake, the epicenter of the Dec. 9, 2016 quake was 38 miles southwest of Kirakira, the provincial capital of Makira-Ulwara Province. Reports of damaged and collapsed houses and a damaged hospital soon emerged from earthquake-affected areas. People fled to higher ground after the initial earthquake for fear of a tsunami.

About 34,000 people in Makira, South Malaita and Guadalcanal provinces were affected by widespread destruction of homes, community kitchens, food sources, and livelihoods. They experienced multiple aftershocks, including a strong second earthquake early on Saturday, December 10. Many families left the damaged homes to stay in the bush, though seasonal rains made living without shelter doubly difficult.

How can I help children and families affected by disasters in the Solomon Islands?

World Vision has been working in the Solomon Islands since 1980 and now operates in Makira, Malaita, Guadalcanal, Temotu, and Central provinces. Our work focuses on clean water, sanitation, and hygiene; economic empowerment; preventing gender-based violence; education; disaster planning and prevention; maternal and child health; and nutrition.

In 2013, World Vision supported the Solomon Islands government with humanitarian and emergency support following the earthquake and tsunami in Temotu Province. The following year, we assisted survivors of flash floods in Guadalcanal Province.

The 2016 earthquake, subsequent landslides, and tidal surges impacted more than half of World Vision’s program areas in the Solomon Islands. At the time of the 2016 earthquake, World Vision had pre-positioned supplies in three locations and began immediately to assess damages and provide aid in cooperation with the national government. Items distributed included shelter kits, kitchen sets, blankets, tarpaulins, jerry cans, hygiene kits, boats, and fuel.

Given the distances and isolation of many of these island communities, responding to disasters is more challenging and problematic in the Solomon Islands. Thus, disaster preparedness is critical.

Through World Vision’s work in disaster risk reduction, we help communities prepare for potential disasters to mitigate their impact. This work is critical to development, protecting lives and livelihoods so people can break free from poverty. 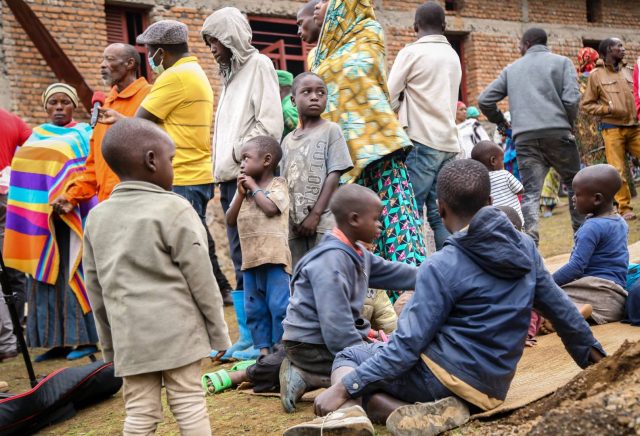 Democratic Republic of the Congo volcano: Facts and how to help