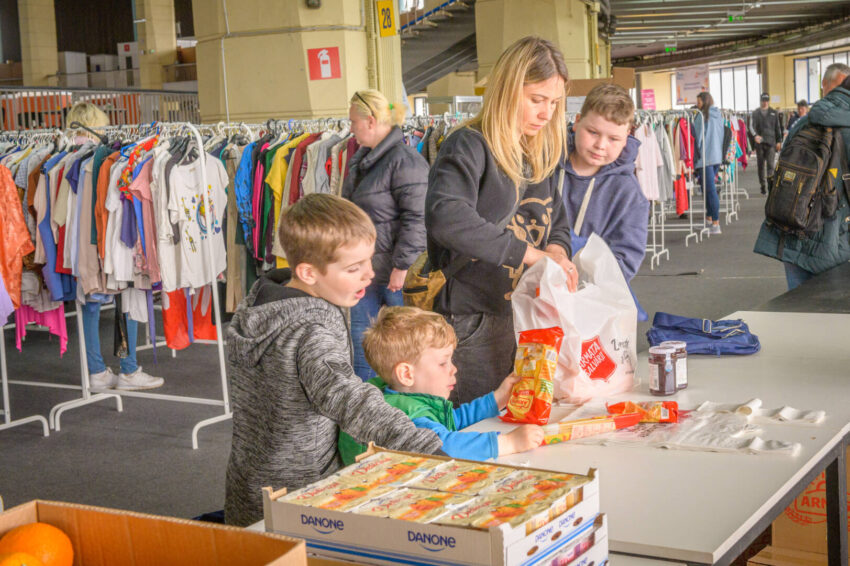 In Bucharest, Romania, Tatiana and her three sons, 13-year-old Ivan, 8-year-old Maxim, and 3-year-old Alexander, pick up food and hygiene supplies from Romexpo, a large exhibition center and indoor arena that’s been temporarily converted to a refugee shelter. Tatiana and her family are among the millions of refugees who have fled the war in Ukraine seeking safety in countries across Europe. (©2022 World Vision/photo by Laura Reinhardt) 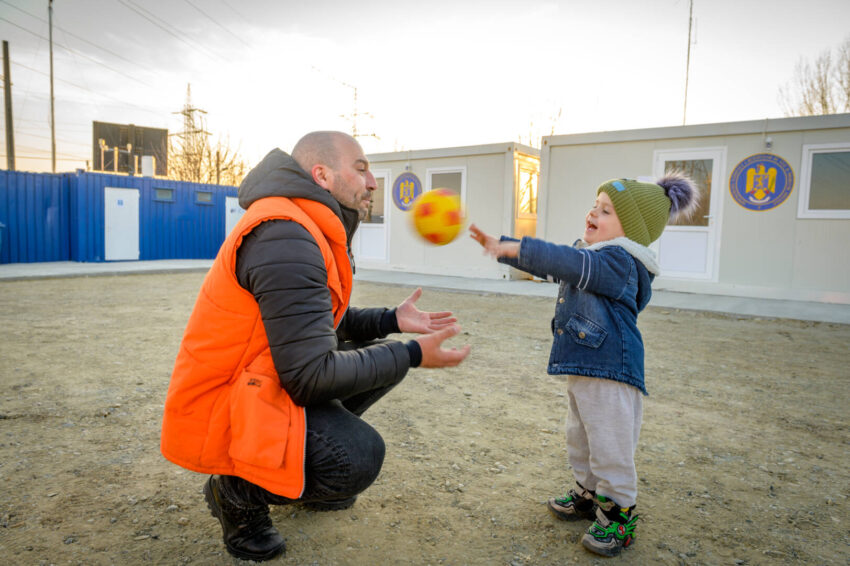 Cătălin Romanescu, a social worker with World Vision’s Romania office, joyfully catches a ball from 2-year-old Dima outside a child play area World Vision has set up along the border with Ukraine. The play area gives Dima and other children impacted by the crisis in Ukraine a safe space to play and stretch their legs while they wait with their families for the next bus to continue their journey. (©2022 World Vision/photo by Laura Reinhardt)

World Vision staff Nicoleta Popa (left) and Alberto Roca (right) pass out food and supplies to refugee children and families who fled fighting in their hometowns in Ukraine and crossed into Romania on February 26, 2022. (©2022 World Vision) 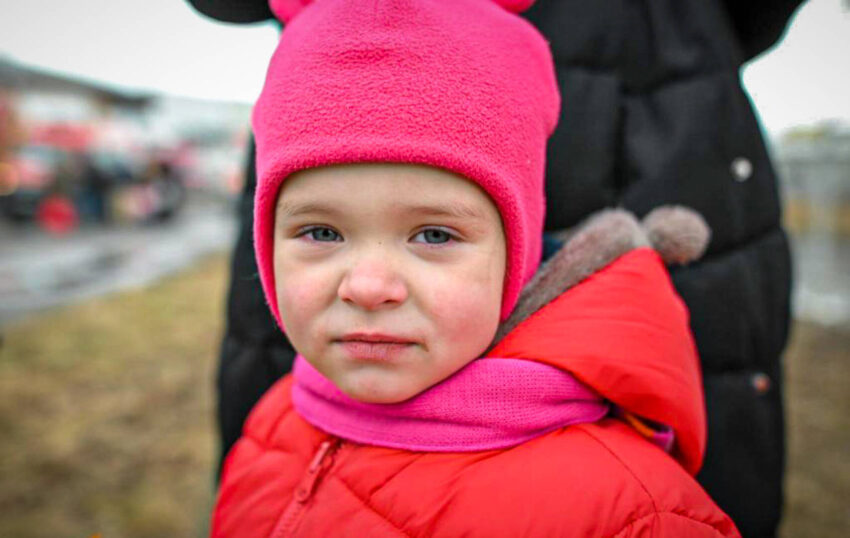 Brother and sister (Taisia, 4 years and Tihon, 6). Their father brought them over to the border in order to make sure that they are safe and he returned to Ukraine to fight in the war. The children do not fully comprehend what is going on. They were in bunkers while their city was bombed and their parents did their best to keep the children away from such terrible experiences, so that they wouldn’t have traumatic memories for the rest of their lives. 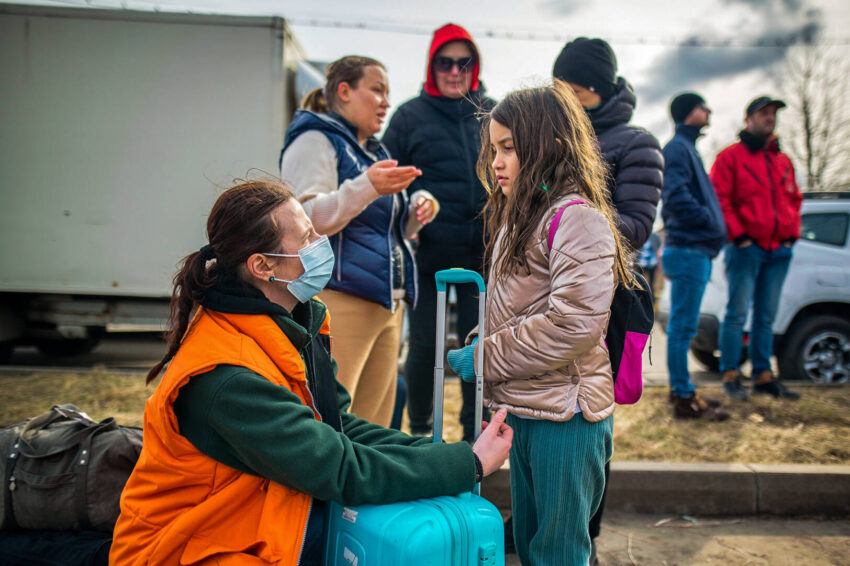 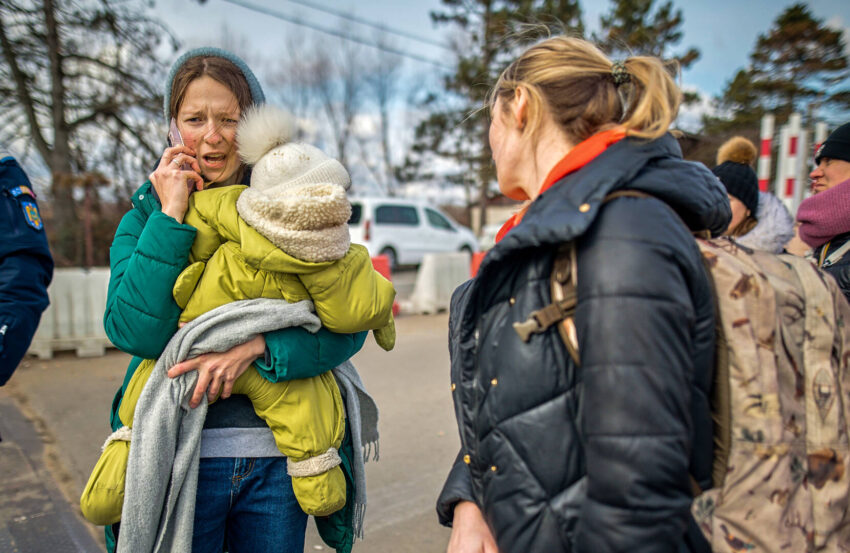 A mother and baby cross the Ukrainian border into Romania, where they are met with other refugees from the escalating crisis. (©2022 World Vision/photo by World Vision Romania staff) 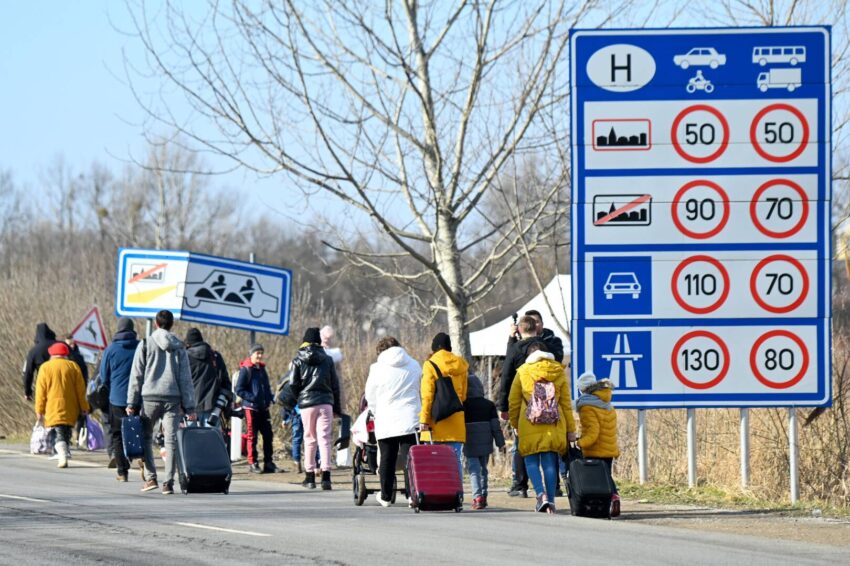 Ukrainian families fleeing the escalating conflict in Ukraine are seen walking with their luggage after crossing the Hungarian-Ukrainian border near Hungary on February 25, 2022. (Photo by Attila Kisbenedek/AFP via Getty Images)

The people of Ukraine have endured more than six months of escalating destruction and displacement since the war began in February of this year. As of early November, more than 7 million had fled to countries across Europe and nearly 7 million had been displaced within Ukraine. The overwhelming majority of these refugees and displaced people are children and women.

FAQs: What you need to know about Ukraine’s humanitarian crisis

Find answers to frequently asked questions about the war in Ukraine and learn how to help children and their families.

Fast facts: War in Ukraine and the refugee crisis

How many people are affected by the war in Ukraine?

According to the United Nations, at least 17 million people in Ukraine need humanitarian aid and protection. In addition to the more than 7 million refugees outside the country, an estimated 7 million people have been displaced within Ukraine, meaning that nearly one of every four Ukrainians has been forced from their homes.

Where are Ukrainian refugees going?

Refugees have fled to countries across Europe including Poland, the Czech Republic, Moldova, Slovakia, Romania, and Hungary, where they have been widely welcomed by governments and local communities. However, experts warn that as the conflict drags on, host community resources are being stretched — requiring support for local services that benefit both host community members and refugees.

What’s the potential impact of the crisis in Ukraine?

With over 7 million fleeing Ukraine as of early November, this has become the largest human displacement crisis in the world today, according to the U.N. High Commissioner for Refugees.

The conflict has not only devastated the lives of Ukrainian children and families but has created economic disruptions that are impacting child poverty far beyond Eastern Europe. It not only continues to threaten regional stability but is also expected to continue raising humanitarian needs sharply.

U.N. agencies have observed a dramatic increase in global hunger, which was already on the rise, as conflict has complicated the delivery of critical food exports from Ukraine.

What’s the impact of the war in Ukraine on the global hunger crisis?

Considered the “breadbasket of Europe,” Ukraine and Russia together export 29% ­of the world’s wheat. In 2021, Ukraine was among the top three global exporters of wheat, corn, rapeseed (used to make canola oil), sunflower seeds, and sunflower oil. Increased stress on food systems is set to increase acute hunger for 323 million people in 2022. Out of 55 countries with food crises, 36 depended on Ukrainian and Russian exports for more than 10% of their wheat imports in 2021, according to the Global Network Against Food Crises.

How can I help refugees who have fled the war in Ukraine?

Give to help provide care and support for children and families who have been forcibly displaced and those suffering the broader effects of the crisis.

What’s World Vision doing to help families impacted by the war in Ukraine?

As war continues, humanitarian needs are multiplying. World Vision staff in Romania have been working to provide hundreds of thousands of refugees with essential aid, including emergency food assistance packages and educational and psychological support. We’re also working with partners to support refugees in Moldova and displaced families in Ukraine, and through our staff in Georgia, where thousands of visiting Ukrainians were stranded when the conflict began.

Since the escalation of war in Ukraine, we’ve recorded stories of refugees — from mothers like Olga of Kyiv and Angela of Irpin to children who grabbed one last piece of home and fled as war erupted around them.

How many people has World Vision helped since the start of the war in Ukraine?

We’ve been responding since the first week of the crisis and are continuing to scale our response across the region, with the goal of reaching nearly 300,000 people in Romania, Ukraine, Moldova, and Georgia over the next few months.

World Vision’s years of work in Eastern Europe have positioned us well to support those affected by this crisis. In 2021, we assisted 3.2 million people across the Middle East and Eastern Europe through emergency response programs.

Listen to an interview with World Vision U.S. President and CEO Edgar Sandoval Sr. as he shared how the organization was supporting Ukrainian refugees at the outset of the conflict.

How many children are affected by the conflict in Ukraine?

How are children being impacted by the Ukraine crisis?

Ukraine’s 7.5 million children have been put at grave risk. The conflict has forced them into situations of extreme vulnerability and has led to mental and emotional stress, the loss of loved ones, interruption in education, and the destruction of homes and family livelihoods.

Children continue to be killed, injured, and deeply affected by the violence. At least 365 children’s deaths have been documented between February 24 and August 28, 2022, along with injuries to an additional 623 children, according to OHCHR.

How is the war impacting education in Ukraine?

War in Ukraine has displaced students and teachers, destroyed schools, and dramatically hampered the delivery of education. As the school year begins, the education of an estimated 5.7 million children has been affected, including 3.6 million due to school closures.

How many schools have been destroyed?

As of May 6, 2022, 1,635 schools and universities (5% of total) have been damaged as a result of hostilities, and 126 have been destroyed, according to the World Bank, which cites the Ministry of Education and Science of Ukraine (MoES).

Is it safe for students in Ukraine to return to school?

About 86% of schools in Ukraine have resumed classes through online initiatives.

World Vision is providing informal education and catch-up materials to children in Ukraine. More than 5,000 children have received educational support in Ukraine and surrounding countries.

“The conflict is jeopardizing the future for an entire generation of Ukrainian children,” said Jennifer Neelsen, World Vision’s Ukraine crisis response director. “Within the space of six months, their lives have drastically changed, and now their access to education has been compromised or even entirely cut off.”

What are other concerns for children affected by the Ukraine crisis?

In addition to missing out on school, children affected by the war in Ukraine are also at risk of lasting psychosocial impacts. Over 1.5 million risk mental health complications as a result of being exposed to the horrors of war. According to the U.N., almost every child in Ukraine has been exposed to deeply distressing events.

“As always, innocent children are bearing the brunt of conflict,” said World Vision’s Jennifer Neelsen, director of the Ukraine response. “Many have witnessed violence and death, millions have been forced to leave their homes, their pets, and even family members. Their lives have been torn apart and the international community must prioritize their mental health and education.”

Is World Vision helping support the emotional needs of children?

World Vision has set up Child-Friendly Spaces (CFS) to help meet the emotional needs of children impacted by the crisis. In these safe spaces, children can play, engage in informal learning, and express their worries and fears to trained, caring staff. Most importantly, they get a chance to just be a child with other children who are facing the same situation.

The national director for World Vision’s Romania office, Mihaela Nabăr, said the spaces also give children some time to experience aspects of a normal life again.

“World Vision research has shown that conflict has severe and long-term impacts on children. It is vitally important for children who have been forced to flee Ukraine to quickly retrieve some kind of routine, have something to look forward to and have something familiar they can enjoy. And this is what a CFS can partly provide,” Mihaela explained.

How can I be praying for children and families made vulnerable by this crisis?

For World Vision, prayer is a first response. As a Christian organization, we believe that communities of faith have an important role to play in restoring peace and wellness to Ukraine — both in the country and around the world.

Please join us in interceding with God:

One of our global staff members shared the following beautiful prayer:

Loving God, Creator of all peoples and source of all love,
We are saddened by the unleashing of horror and destruction in Ukraine.
We pray that the very best practices of peace will prevail.
We pray gratefully that Your Spirit of healing and hope is present.
We are committed as Your people, as disciples of Your gospel of reconciliation, to wage peace as we are able in all Your good and lovely creation.
We pray this in the name and healing spirit of Jesus.
Amen.

Help children and families affected by the Ukraine crisis