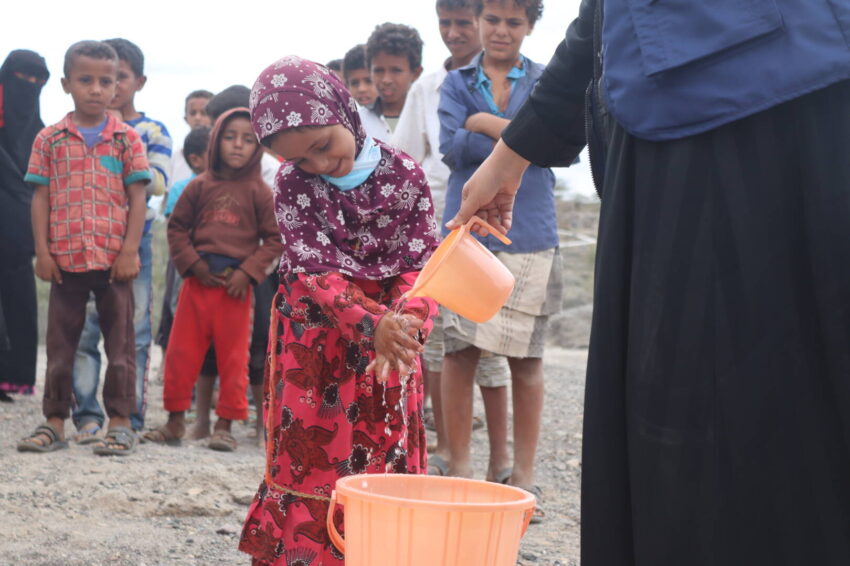 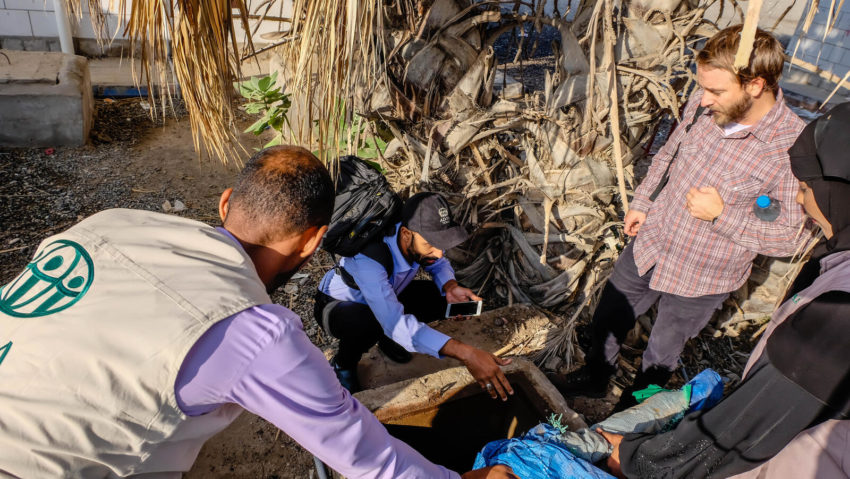 Staff at a Yemeni school share their challenges related to providing students with clean water. (©2019 World Vision/photo by Evany Debone) 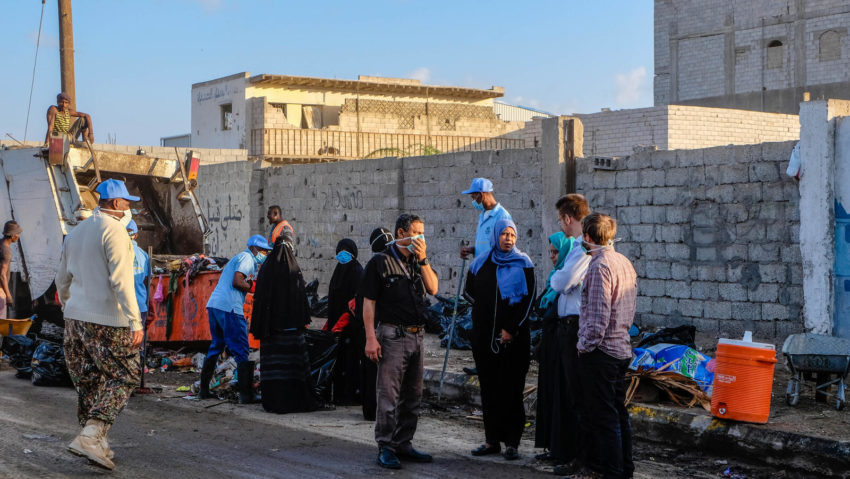 In Yemen, people affected by the conflict earn cash for cleaning streets through a neighborhood sanitation project. (©2019 World Vision/photo by Evany Debone)

The humanitarian crisis in Yemen, caused by armed conflict ongoing since early 2015, is among the worst in the world — and has exacted a devastating toll on children. More than 10,200 children have been killed or injured in the war in Yemen, according to the United Nations Children’s Fund (UNICEF).

More than 17.4 million Yemenis are food insecure, with that number projected to reach 19 million by the end of 2022. An estimated 2.2 million children under 5 are suffering from acute malnutrition, and of those, more than 500,000 face severe acute malnutrition, which can lead to death without life-saving aid.

Conflict has displaced more than 4 million people, of whom nearly 80% are children and women. Millions lack access to basic healthcare, clean water, and sanitation. Five million are said by the U.N. Refugee Agency to be one step away from famine conditions.

War and factionalism have reversed Yemen’s human development by more than 20 years. Yemen was already a poor country, with 47% of its population living in poverty in 2014, according to the U.N. Development Program. Now, an estimated 80% of the population lives below the poverty line.

Since 2019, World Vision has been working through partner agencies in remote communities in southern Yemen, where ongoing conflict, alarming levels of food insecurity, and health threats persist. We’re dedicated to helping to protect the children of Yemen, and we continuously explore ways to extend our response to reach the most vulnerable children and their families through new partnerships.

FAQs: What you need to know about the Yemen war

Explore frequently asked questions and facts about the conflict and resulting humanitarian crisis in Yemen, and learn how you can help people in need.

Fast facts: What is happening in Yemen?

When and how did the war in Yemen start?

A Houthi insurgency began in 2004 in northern Yemen and escalated in 2005. The Yemeni government was toppled in the Arab Spring uprising of 2011. Houthis went on to capture the capital, Sanaa, in 2014, launching the country into civil war.

How has the crisis affected children?

Yemeni children are suffering terribly in the crisis:

“Whenever the conflict in Yemen flares and violence escalates, children are the ones who pay the heaviest price,” UNICEF Executive Director Henrietta Fore has said. “Families are being torn apart by horrific violence. Children cannot and must not continue to be the victims of this conflict.”

Why is hunger prevalent in Yemen?

Even before the conflict began, poverty and hunger were rampant in Yemen. About 90% of the country’s food was imported. Now that much of the commercial trade is cut off, it’s difficult for farmers to get seeds and fertilizer, and aid agencies struggle to import and transport goods. This perfect storm of food insecurity has led to near-famine conditions.

What is the current level of hunger in Yemen?

The level of hunger and food insecurity in Yemen is unprecedented, according to the World Food Programme (WFP). World Vision is the WFP’s largest implementing partner worldwide.

Conditions continue to deteriorate for Yemeni people. At least 17.4 million people are facing acute food insecurity. About 2.2 million children under 5 are projected to suffer from acute malnutrition in 2022, and of those, 538,000 children are expected to be severely malnourished. Additionally, about 1.3 million pregnant and lactating women are expected to suffer from acute malnutrition through 2022.

Concern is growing over the number of people experiencing catastrophic levels of hunger, which is projected to increase fivefold, from 31,00 to 161,000 by June 2022.

What is World Vision doing to help in Yemen?

In November 2019, World Vision began working with other agencies to provide aid for children in Yemen. Partnering with the Adventist Development and Relief Agency (ADRA), World Vision’s work in 2020 included the rehabilitation of septic tanks and community water systems, including 29 water access points in key regions. At least 25,942 individuals were able to get access to clean water, improved sanitation, and hygiene promotion services.

Through our partnership with Medair, in 2021 we began aiming to reach about 16,000 people with improved access to emergency health and nutrition assistance and programs. So far, we’ve reached 12,880 people — more than 50% of them children. We’re supporting five health centers and mobile health teams to distribute life-saving aid to families living in remote communities in South Yemen, where we’ll be able to support and strengthen life-saving treatment for acute malnutrition and promote healthier feeding practices among mothers, infants, and young children, as well as enabling free access to quality primary healthcare services at the community level.

Our plans include scaling up activities in water and sanitation, health, livelihoods, and child protection — and we plan to reach over 100,000 people through a campaign to promote healthy sanitation and hygiene behaviors.

World Vision is dedicated to helping to protect the children of Yemen, and we continue to assess all our programs to best respond and support vulnerable children and their families.

How can I help the Yemeni people?

Here are some ways you can help bring hope to people in Yemen:

Located at the southern tip of the Arabian Peninsula, Yemen has been a crossroads of culture and trade since ancient times. It became part of the Ottoman Empire in the 1500s, followed by British occupation until 1967.

1967 to 1990: Following a civil war, the country divides into North and South Yemen. Conflict continues.

2004 to 2010: Houthi rebels controlling the north maintain an insurgency against the central government in the south.

2014: Iran-backed Houthis take control of most of Sanaa, the southern seat of government, in August and reject government offers to address their grievances.

2015: President Hadi is forced to flee the country in March. In May, a Saudi Arabia­­-led coalition of mainly Gulf Arab states enters the conflict, conducting airstrikes against the Houthis and imposing a naval blockade.

2019: U.N. efforts lead to a power-sharing agreement between separatists and the Yemen government to end the conflict in southern Yemen.

2020: Progress stalls on troop withdrawals because of mistrust among warring parties.

2021: The U.N. warns that millions of displaced Yemenis are a step away from famine.