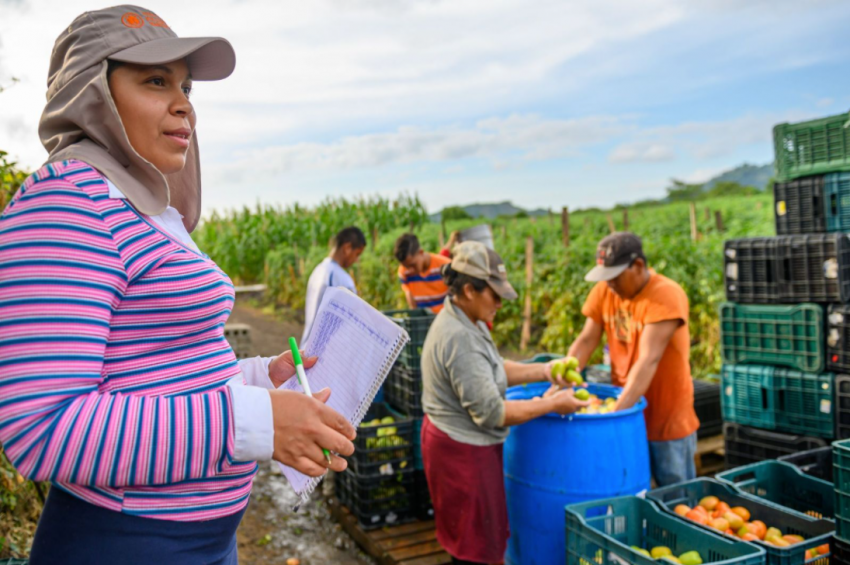 Kenia in Honduras oversees the harvest and preparation for market of the family’s abundant tomato crop. (©2019 World Vision/photo by Laura Reinhardt)

Activity buzzes in the field on a warm November day. Down each row, workers pick tomatoes from plants about 5 feet tall. Others balance baskets heavy with produce, carrying them to a station where they’ll be weighed, washed, then loaded for transport to the supermarket.

It’s a good harvest, and because of it, many people have work. At the day’s end, Jose Luis and his wife pay their workers. Smiles light up faces. But that wasn’t always the case for the now 33-year-old Jose Luis.

Two hours from the Honduran capital of Tegucigalpa is Jose Luis’ home in Jamastran. There, most residents used to eke out a living by farming beans and corn — growing enough for their family with little left to sell. Working at the local tobacco factory earned about $80 a week. Migrating offered the promise of jobs earning nearly quadruple that amount.

At the age of 18, Jose Luis decided to leave his parents and his brother behind to seek better financial opportunities. But his bus was stopped in Guadalajara, Mexico, where he was deported. Back at home, he farmed corn and beans alongside his father.

But change was coming in his community, and with it, the promise of a better future. Community members created an agricultural growers’ organization and partnered with World Vision. Jose Luis’ neighbor, Nortie (pronounced Nor-tea-a) Sosa was the organization’s president. He learned new farming techniques from World Vision’s agricultural experts.

That program, starting in 2011, has generated more than 22,000 jobs, multiplying the incomes of farmers previously making $2 to $4 a day.

THRIVE — World Vision’s biblically based, resilient livelihoods program — built upon that and is improving the lives of 70,000 people by generating jobs, increasing household incomes to what the United Nations considers middle class in rural Honduras, and eliminating the need for migration by creating a livable income.

Through THRIVE, farmers learn about drip irrigation and receive better seeds and fertilizers, improving their output. Then World Vision helps them gain direct access to markets, which increases profits by eliminating the middleman.

Empowering the next generation

Nortie and other organization members started a farming school to share their learnings with other community members.

Jose Luis was one of the students, and he’s done very well. Now he employs 11 people full time, but during harvest that number can reach 50.

Jose Luis has his own family now. He, his wife, and their 6-year-old son, Jose David, have lived till now with Jose Luis’s parents. But soon they’ll move into a home of their own, right next door.

Jose Luis sends his son to a bilingual school. That education will offer him choices for his future — choices that Jose Luis didn’t have growing up. Jose David won’t agonize over the decision of whether to migrate or not, which his father once did.

“I believe that because he has a better source of income now, my son won’t leave,” Jose Luis says.

He hopes his son will continue the family business, but adds: “It won’t be what I want anymore. When he grows up, he will decide what he wants to do.”

That’s the beauty of World Vision’s economic empowerment work — it sows possibilities that will be reaped for generations to come.