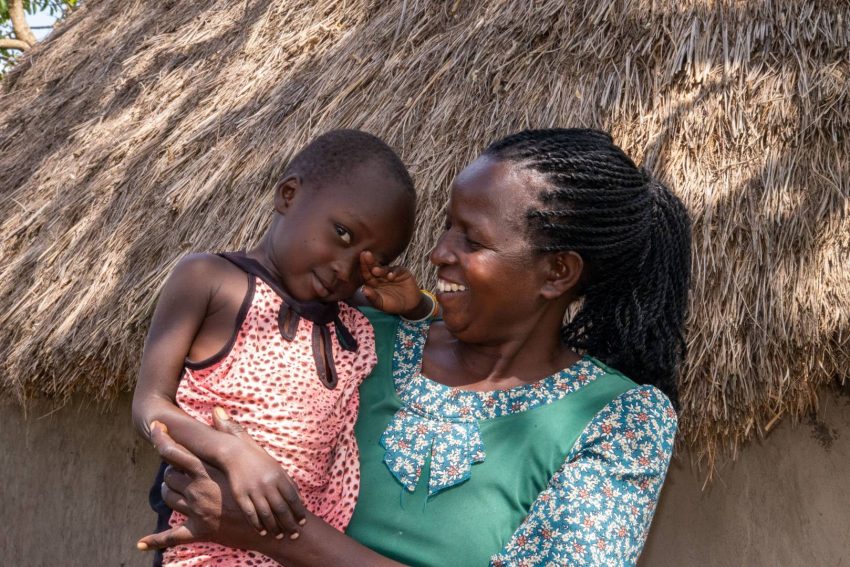 Akanya holds her granddaughter Delilah at their home in Uganda. Last year Delilah contracted malaria, and a World Vision–trained community health worker was able to diagnose her and provide anti-malarial medicine that healed her. (©2021 World Vision/photo by Clive Inyhensico)

Akanya gently laid her hand on her granddaughter’s forehead. It felt hot — too hot. Three-year-old Delilah definitely had a fever.

“I reluctantly thought it was temporary and controllable by cooling with a damp cloth,” Akanya says.

Akanya cares for Delilah and four other grandchildren. The family lives in a rural part of eastern Uganda, a country that UNICEF reports annually experiences 45.8 deaths of children under 5 per every 1,000 children born. By comparison, the U.S. sees only 6.5 deaths per 1,000 children born. Much of those deaths are due to lacking access to basic healthcare because clinics are often far away, and people lack money and transportation to get there.

The cool cloth didn’t help. Delilah then lost her appetite and began having difficulties breathing. Akanya’s family doesn’t live near a local health center, but seeing her granddaughter getting worse, she knew she needed to do something. Panicked, she thought giving the child some acetaminophen tablets she had at home would help.

“I was very worried,” she says.

After two days, none of Akanya’s efforts had helped Delilah improve. She knew she needed outside help, so she turned to Dorah Nankya, a World Vision–trained community health worker (CHW). In early 2020, Dorah had recently visited homes in the community and registered families to be supported with health interventions. She and other CHWs targeted households with children under age 5. Their services are free, so there isn’t a financial burden on families who may already be struggling financially.

So shortly after dark, Akanya showed up at Dorah’s home with Delilah asking for help. “I didn’t expect to receive a patient, but I knew this was my calling,” Dorah says.

She quickly ran a rapid diagnostic test on the child, and the results showed that she had malaria. According to the World Health Organization, malaria is the leading cause of death in Uganda. Children are even more vulnerable. Dorah gave Delilah anti-malarial medicine and gave Akanya instructions on how to properly continue the treatment at home. She also shared the kinds of foods to feed her and that she needed a lot of fluids.

After two days, Akanya could feel Delilah’s fever reducing, and she saw her granddaughter had the strength to lift herself up and walk without being carried. “When she uttered out of the blue that she wanted to eat porridge, her favorite food, I definitely knew my grandchild’s appetite had returned,” Akanya says with a laugh.

On the third day, Dorah visited to check in and see how she was recovering and was delighted to see Delilah’s progress. She says, “I feel so proud when I treat a child and see them recover, and I’m really glad that World Vision brought this system into place.”

Dorah also took the opportunity to share with Akanya how she can prevent her grandchildren from getting malaria in the future. “This area is also surrounded by many swamps, and this has helped mosquitos breed and spread all over the community,” Dorah says. “It gets worse during rainy seasons.” She explained how sleeping under a bed net will help protect the family against mosquito bites that could lead to malaria.

Not wanting to see her grandchildren suffer again, Akanya began using a bed net. She is thankful for the life-saving help she received. “I’m grateful because health services are now closer to us,” she says. “This has helped me avoid expenses on transportation to [the] hospital in relation to the long distance involved.”

Dorah has continued to visit the family to monitor other aspects of Delilah’s growth and development as well. The COVID-19 pandemic has made her work even more important. As the virus has spread, many families fear contracting COVID-19 if they seek medical help at health centers for other conditions. CHWs help ensure that children and families are still safely receiving care, being monitored for potential health issues, and receiving treatment for other diseases, such as malaria, pneumonia, and diarrhea.