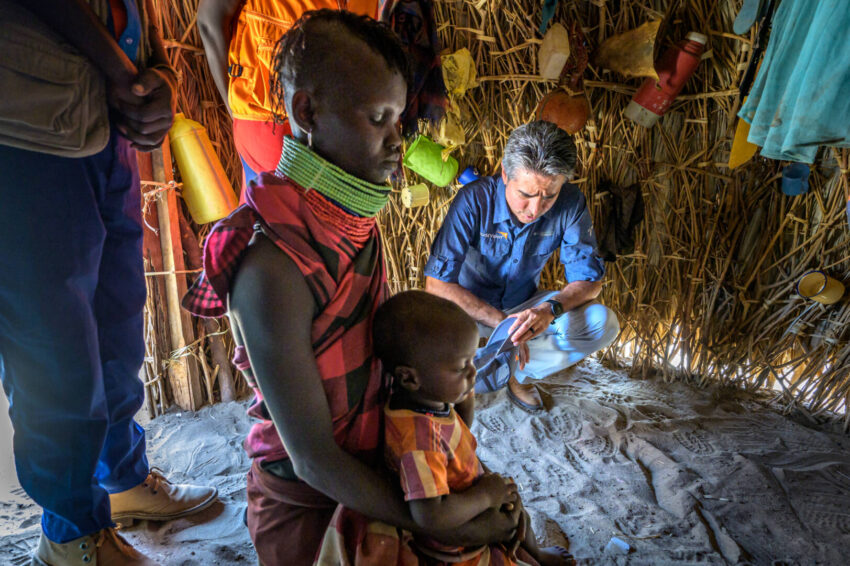 Edgar prays with Ekidor, who shared the food she received in a distribution with neighbors who had not received food. (©2022 World Vision/photo by Jon Warren)

When our Land Cruiser rolled to a stop in a village in Turkana, northern Kenya — a hotspot of the global hunger crisis — I braced myself to encounter desperation and heartbreak.

I didn’t expect to find extravagant generosity and faith.

On the journey to East Africa, my head was full of facts about this crisis. Alarmingly, 50 million people worldwide are facing starvation if nothing is done. Hunger was escalating even before the war in Ukraine due to extreme and unpredictable weather patterns, protracted conflict and violence, and the COVID-19 pandemic. Then, by limiting access to critical wheat exports from the region, the war inflated food costs even further — at a time when families were already suffering.

This was true in Turkana, where the worst drought in four decades has dried up grazing lands and caused the widespread death of livestock. Families who didn’t have safety nets to begin with now lack milk or meat from their animals and face food prices beyond what they can pay. Pushed to the limit, they subsist on food rations from World Vision and wild fruit that has the consistency of sawdust.

As I arrived for a food distribution, I thanked God that World Vision was there to deliver life-saving food for Turkana families. In the prayer time before the distribution began, our staff and community members thanked God too, and expressed gratitude for you, our donors.

With your help, we strive wherever we work to serve the most vulnerable. This particular food distribution reached 150 families who’d been identified for their critical need, based in part on whether they still had animals to sustain them. Among them was a mom named Ekidor, who came with three of her six children. She and her husband sell charcoal and handmade reed baskets for a living, earning enough so that some of their kids can go to school.

Ekidor collected her ration of vegetable oil, sorghum, and beans — only enough to last her family a few weeks — and I walked home with her. Waiting at her gate was a group of neighbors who were not eligible for the distribution — yet they were still hungry. Without hesitation, Ekidor took a cup and began scooping out portions of her food for them. Her generosity left me speechless.

“We’ve been taught this at church,” Ekidor later told me. “These are people with no place else to go.”

I quickly learned that the Turkana people have a strong sense of community — so strong that sharing with others is common, even in a time of dire need.

Imagine if we expanded our vision of community to encompass all God’s children around the globe. How beautiful it would be if we embraced the Turkana spirit of generosity — not just at Christmas but all year round!

I was also struck by the vital role the church plays in Ekidor’s community. “The church is like our second home,” she explained. “We get spiritual nourishment. Without it, life would be hard.”

This touched my heart even as it challenged me. Church can so easily become a weekly task rather than a second home. And how much more can I, like Ekidor, truly depend on God as my “daily bread”?

In Kenya, I was troubled to see hungry children and parched animal carcasses. But I was also blessed to see vibrant faith and amazing generosity, unmistakable signs of God’s presence in the midst of suffering — beauty amid pain. 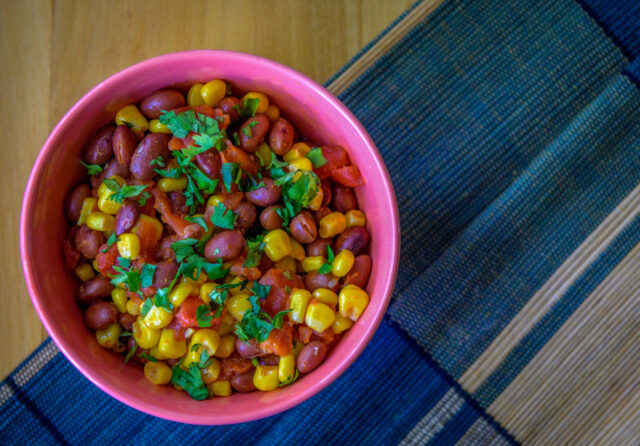 In the kitchen: Githeri recipe