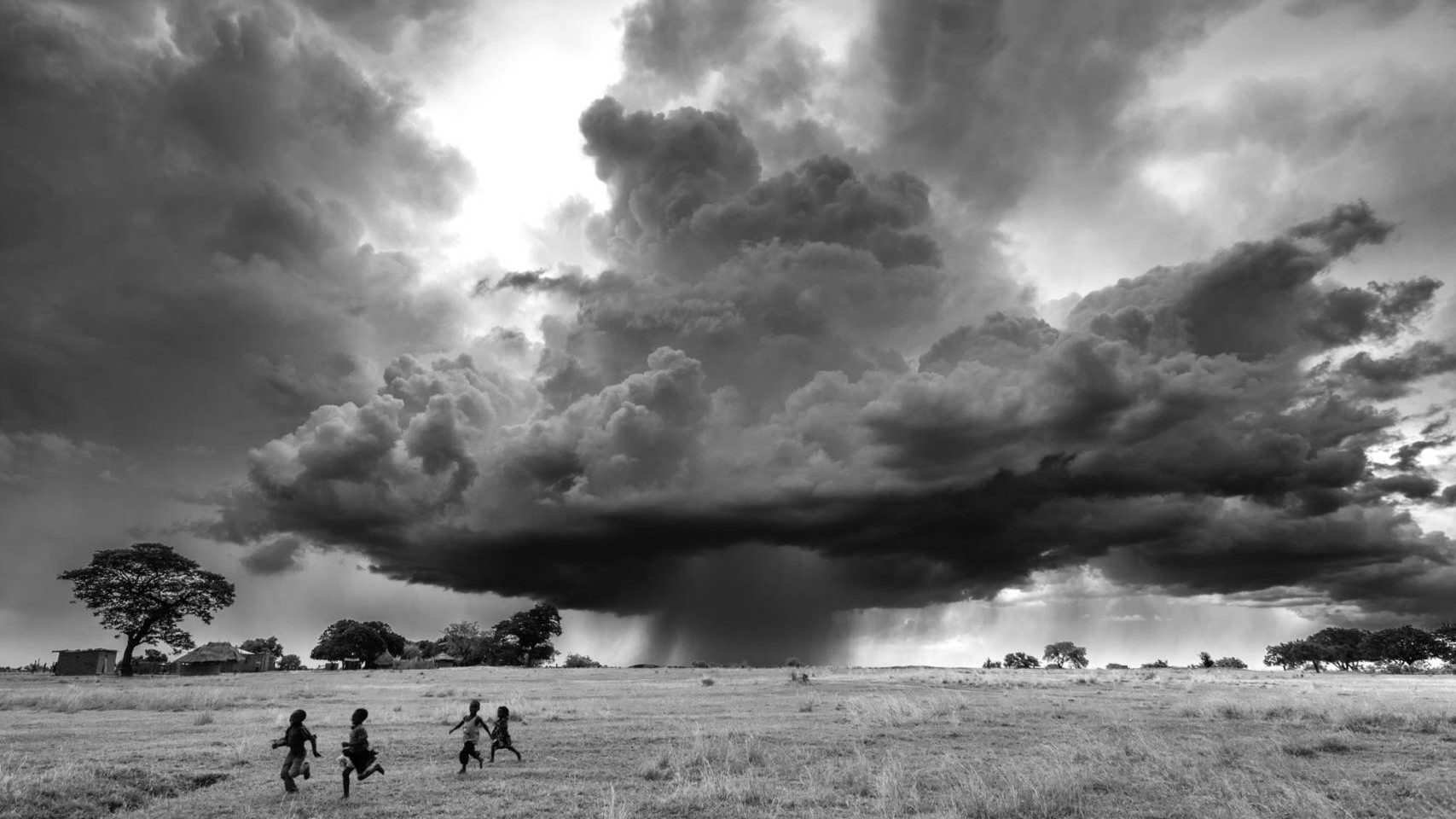 Children run across a field as storm clouds bring rain to a village in Magoye, Zambia. The clouds looked ominous to me, but the farmers there were delighted for rain after months of drought. (©2016 World Vision/photo by Jon Warren)

World Vision’s photographers are always on the move — from Armenia to Zambia and everywhere in between. In 2016, they captured hundreds of moments in thousands of frames that tell the story of World Vision’s work around the globe. Here, they share their best photos of 2016 and the stories behind them. 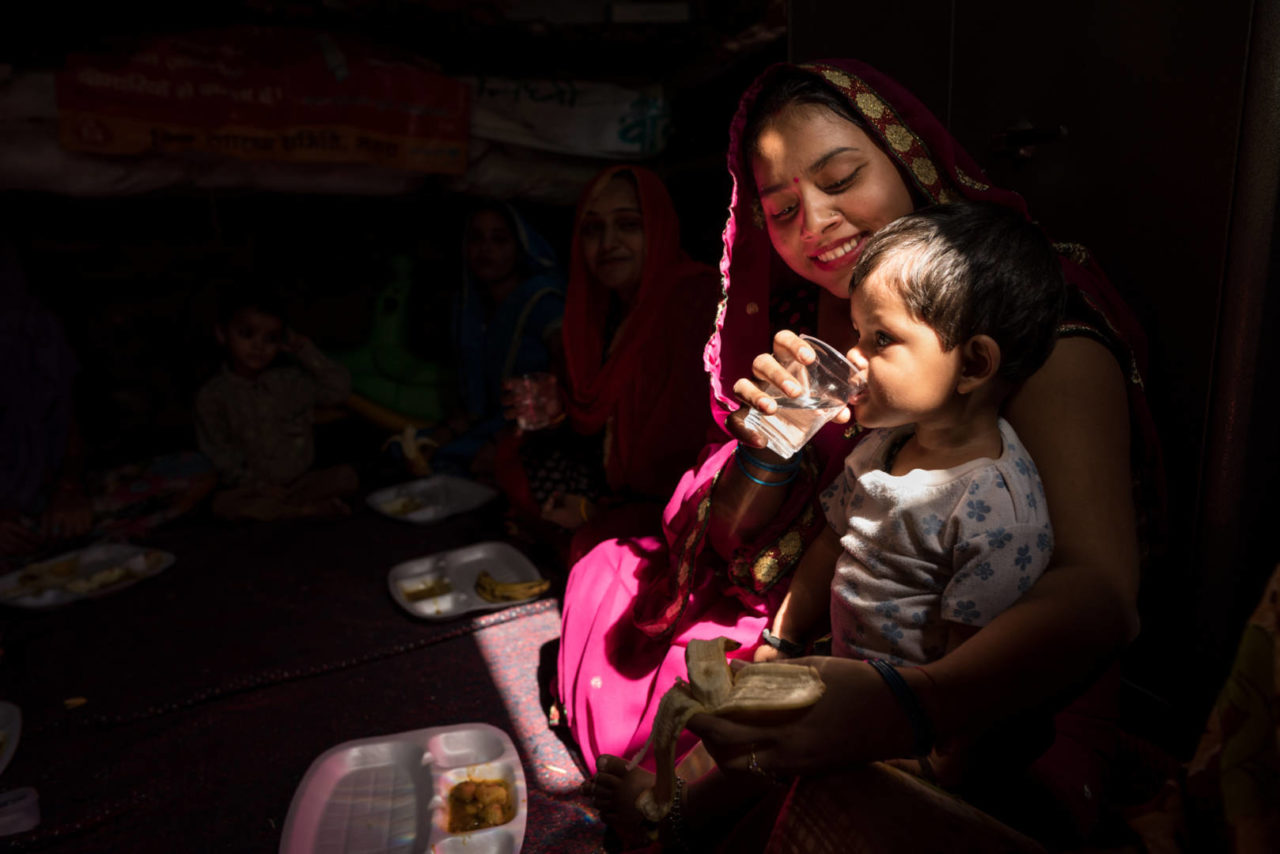 Pooja gives her toddler a drink from a World Vision water purifier in Agra, India. Earlier in the day, I photographed a children’s club in the same room. Spotlights from ceiling holes made it tough to get an even exposure of the large group, so I had low expectations when this mother’s group gathered. I almost didn’t bother going back into the small, dark room. However, persistence paid off — everything I needed for this picture was now in the light. (©2016 World Vision/photo by Eugene Lee) 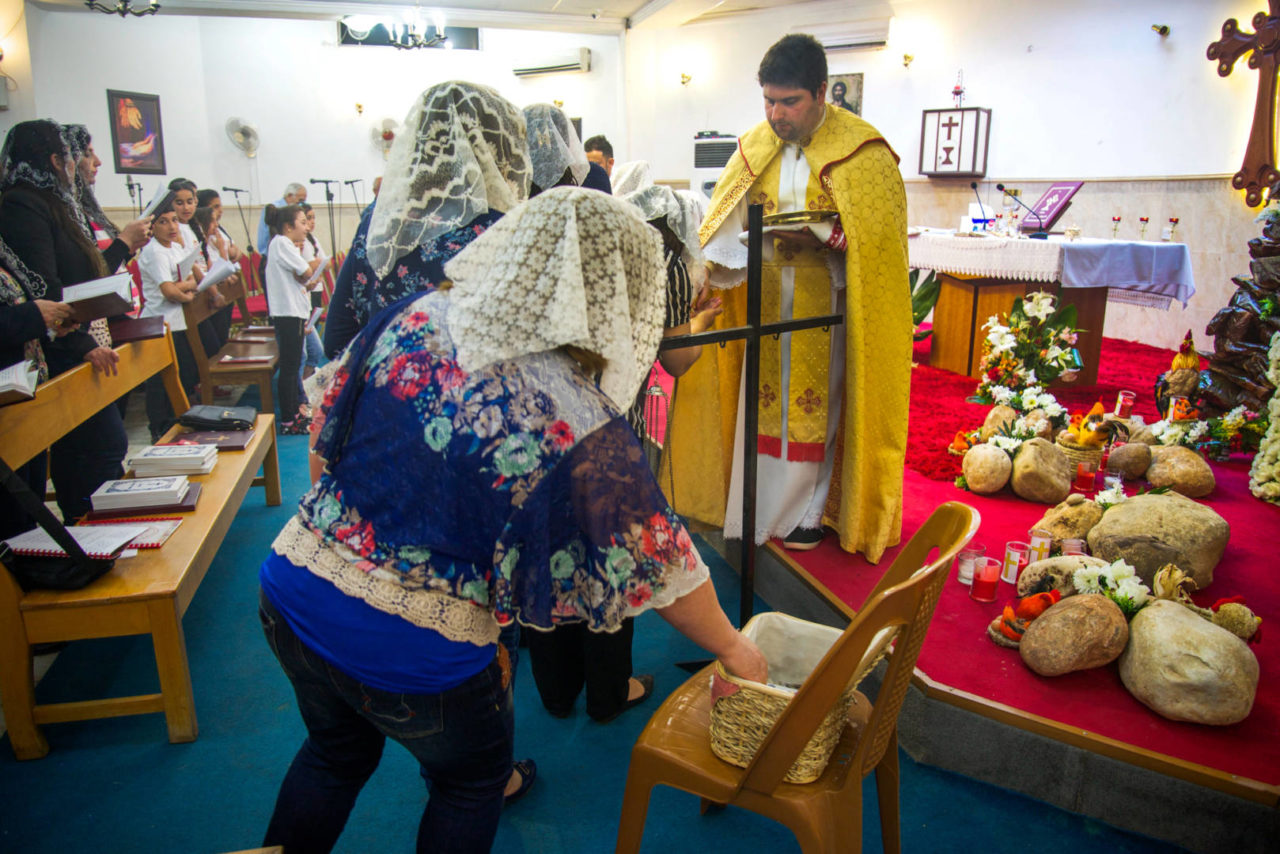 Two years before this photo was taken, Father Daniel was celebrating Mass at Mar Elia church in Erbil, Kurdistan. It was August 7, 2014. After the service, he stepped outside to enjoy the warm Sunday morning. “The place was filled with Christians,” he says. “I was shocked. I didn’t know what happened.” He soon found out. Overnight, as many as 120,000 Christians had fled from nearby Mosul to escape the fighting.

Father Daniel turned from pastor to protector. It was a lot of responsibility for a young priest. Father Daniel was only 24, but he snapped into action. What I loved most about this service was witnessing how people who have lost everything, like the woman in blue, still have something to give. (©2016 World Vision/photo by Kari Costanza) 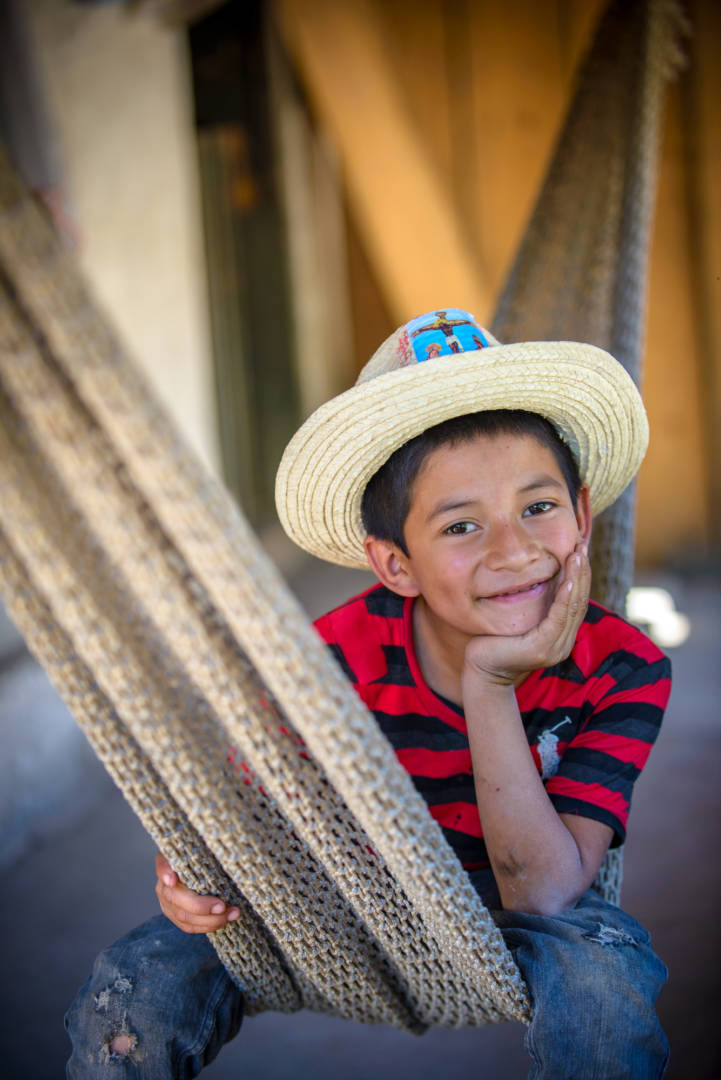 In January, I traveled to Honduras with my friend and longtime co-worker Kari Costanza, who’d been to Honduras after Hurricane Mitch in 1998. During that trip, photographer Jon Warren took a photo of a somber little girl. Kari wanted a similar photo when she saw the hammock on the front porch of Edwin’s home. I got to show a face full of hope and joy in young Edwin. World Vision’s child sponsorship and economic development programs made that emotion possible. I loved his hat with the card showing the cross and, most of all, the slightly jaunty tilt of his head. (©2016 World Vision/photo by Laura Reinhardt) 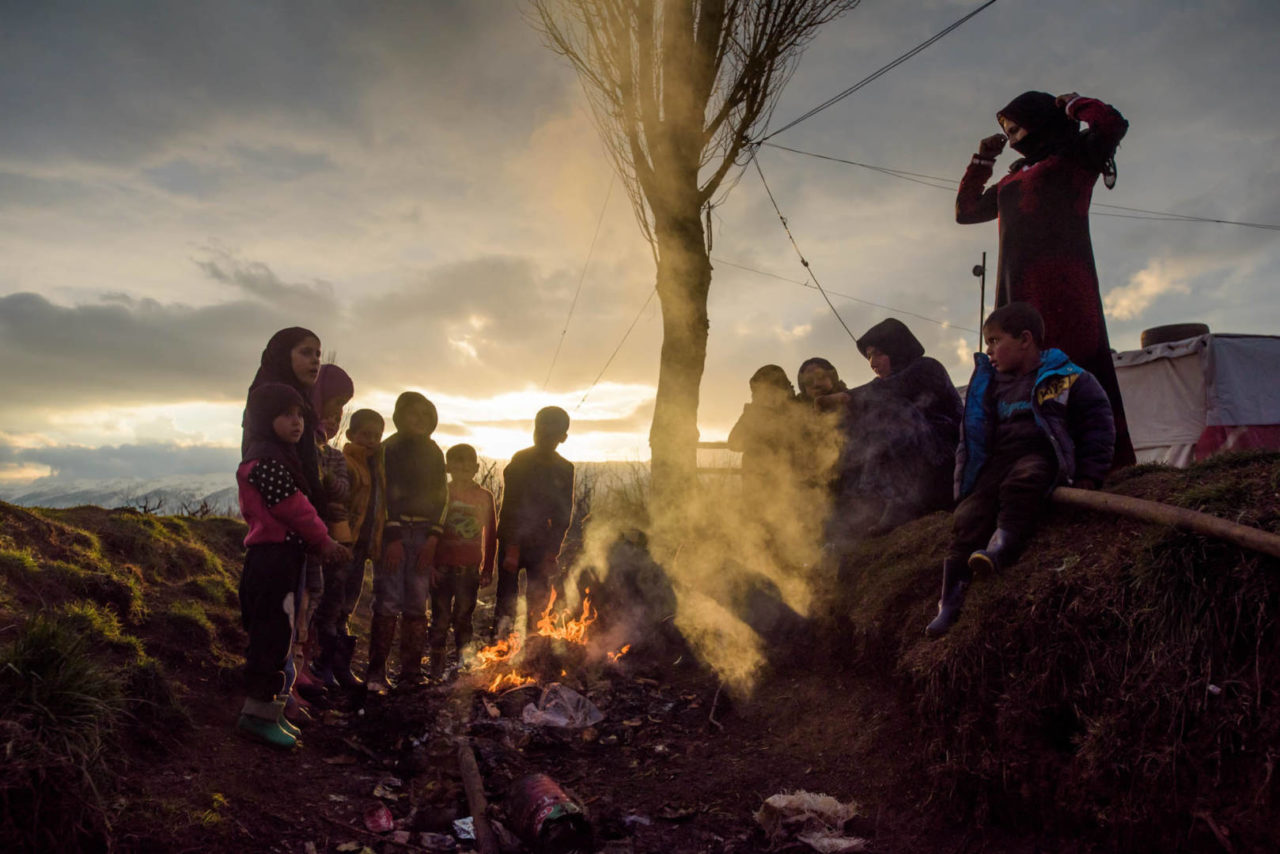 Burning garbage provides a few minutes of warmth for a Syrian refugee family in the Bekaa Valley, Lebanon, close to the Syrian border. About 25% of Lebanon’s population is made up of refugees. Even with all the hardships they faced, the families welcomed us and were eager to share their stories. (©2016 World Vision/photo by Jon Warren) 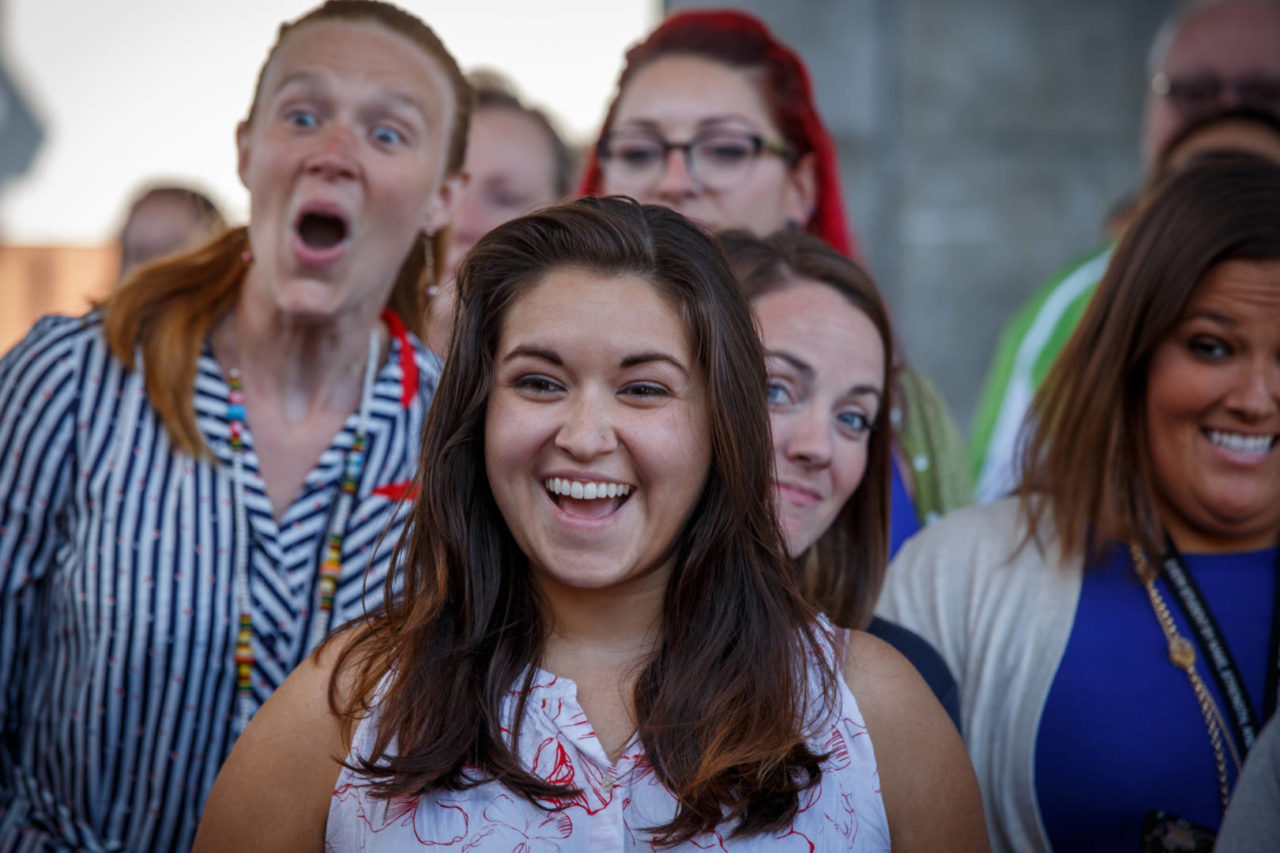 Teachers at Bow Lake Elementary in Seatac, Washington, react to a display of school supplies they received from World Vision and their Parent Teacher Organization in August, just days before the school year began.

Teachers in this area often spend their own money on supplies for their students. For some of them, receiving these supplies meant a legitimate burden would be lifted. The reveal in this scene happened fast, and I wanted to capture this moment even if I had to sacrifice a few others. So I ran ahead of them, squeezed behind the table displaying the school supplies and gifts, aimed my telephoto lens around a few volunteers in my view, and snagged a few frames of the teachers oohing and ahhing. Finding these fleeting moments of joy inspires me. (©2016 World Vision/photo by Chris Huber) 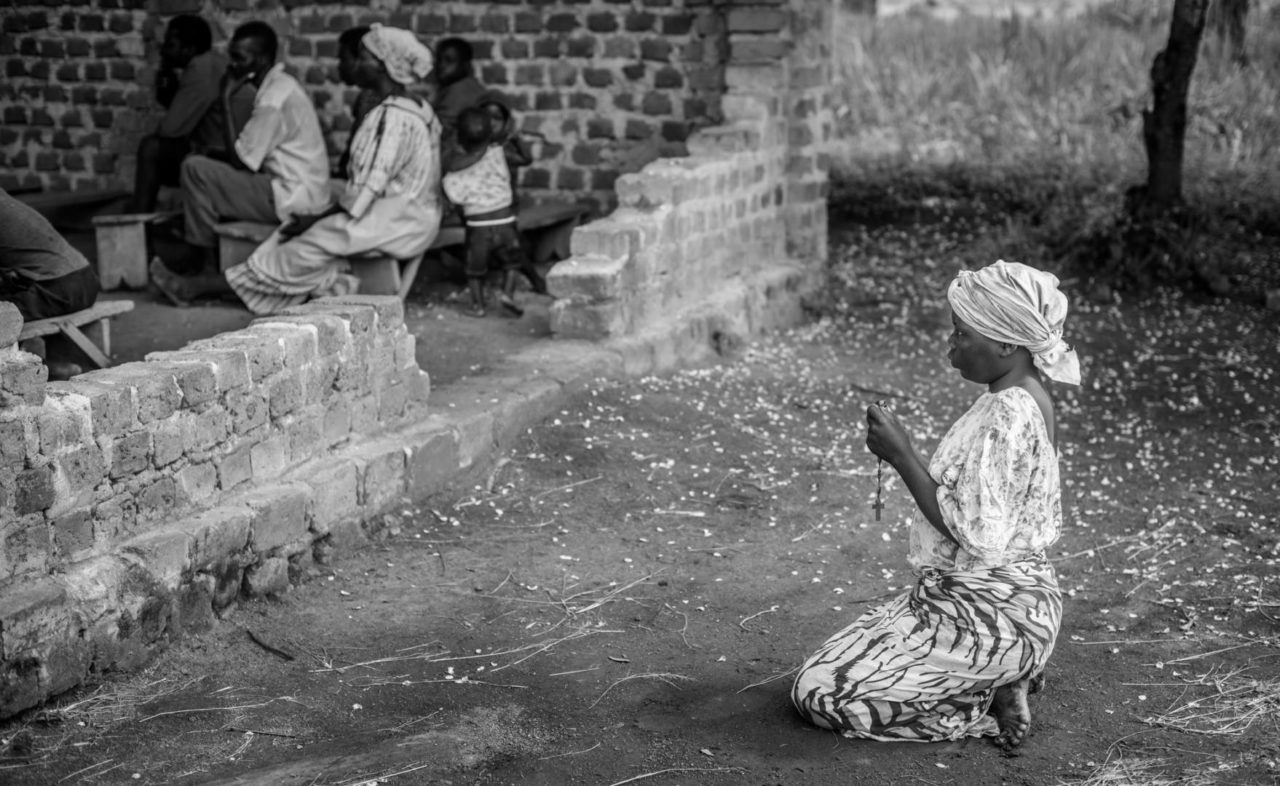 Churchgoers say Jennifer is the first one to arrive each Sunday at the Buruza Catholic Church in Hoima, Uganda, where she has worshipped since she was a little girl. But a fistula rupture during a difficult childbirth experience meant that smelly urine leakage kept her from going inside anymore. A month after I took this photograph, Jennifer’s fistula was repaired at a World Vision Uganda surgical camp. Now, best of all, Jennifer prays inside her church on Sundays. (©2016 World Vision/photo by Jon Warren) 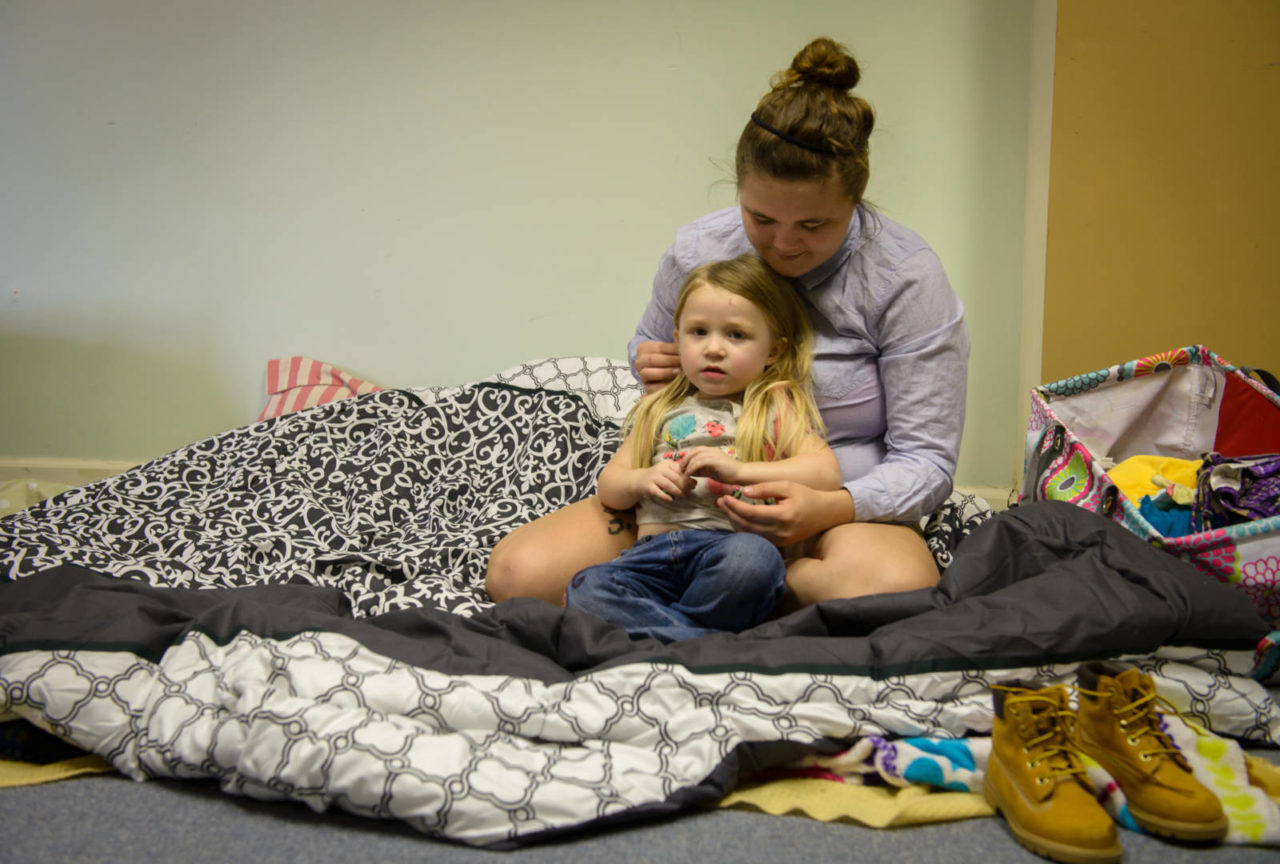 I’d only been back in the office half a day after vacation when Hurricane Matthew began its march up the East Coast of the United States. I volunteered to leave the next morning to go and report on the disaster. My first day, I drove to Valdosta, Georgia, where churches had set up shelters for people evacuating coastal areas. There, I met the almost-4-year-old Sophie and her 20-year-old sister, Haley. They had spread blankets on the floor of a Sunday school classroom as a makeshift place to sleep. The girls played games — Haley trying to make it fun for Sophie — but Sophie said, “I miss my bed.” Thankfully we learned while I was there that the storm had caused minimal damage to their home. (©2016 World Vision/photo by Laura Reinhardt) 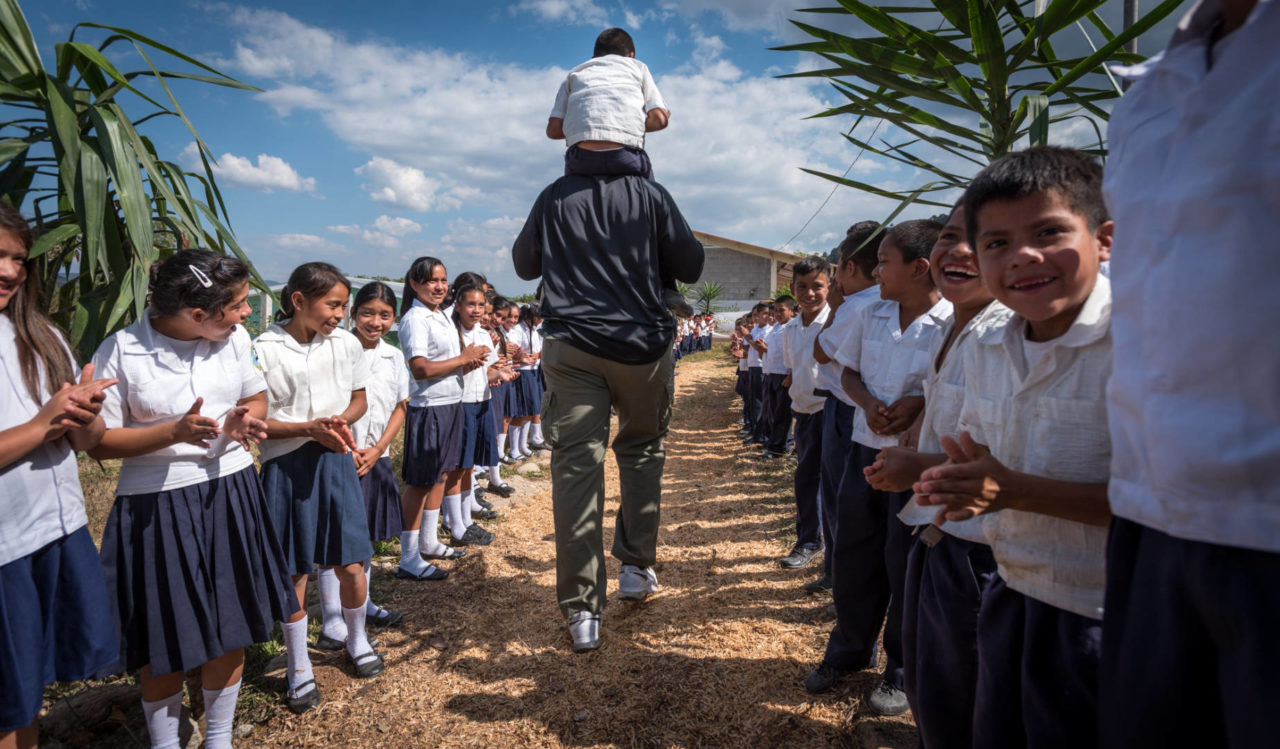 As children clapped and cheered around Kelvin Beachum, Jr., of the NFL’s Jacksonville Jaguars, the 316-pound offensive tackle hoisted 10-year-old Kevin Ariel onto his shoulders. With a huge smile, Kelvin marched into the school through a tunnel of game-day-like fans. It’s not quite the same as an American football game, but to these children Kelvin’s presence and helping heart made him their MVP that day. (©2016 World Vision/photo by Eugene Lee) 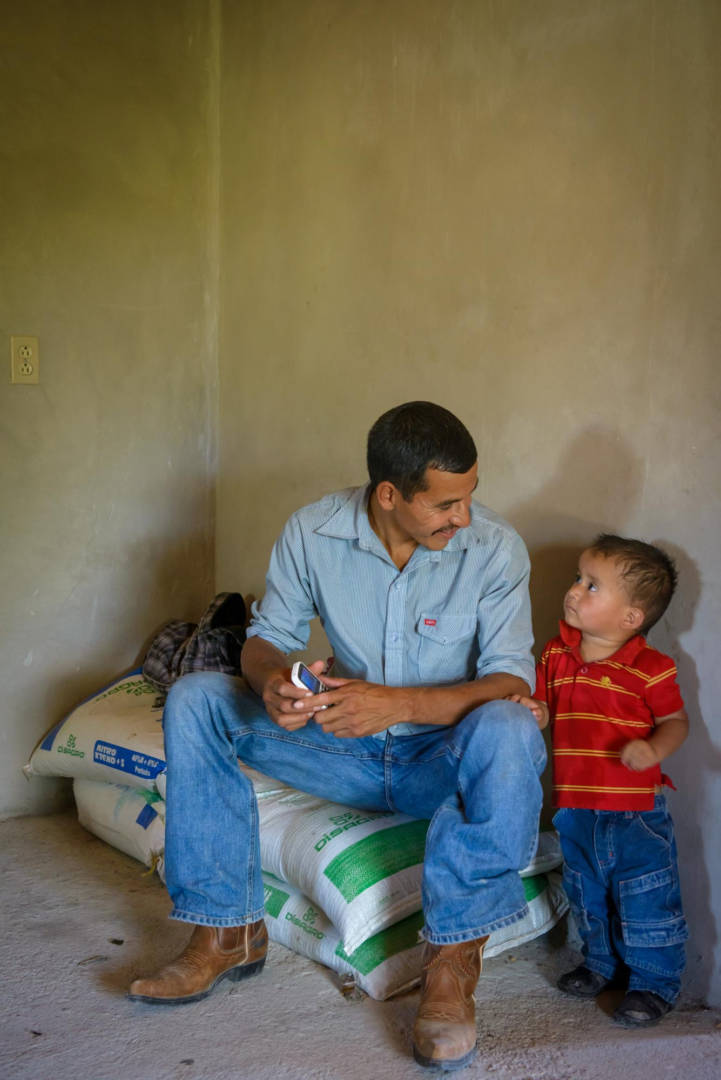 I so often take photos of children with mothers because I usually visit locations when the fathers are off working during the day. But this time, Rosalio Benitez invited us to his home in Gracias, Honduras, which he was expanding. Without the Fountain of Life Savings Group he belonged to, none of this work would’ve been possible. As he sat waiting for lunch on bags of fertilizer, his son, Elmer, came up to him, and they had this exchange. I was thankful I hadn’t decided to leave my camera in the car since we were having a meal. Sometimes those “down” times offer the sweetest moments. (©2016 World Vision/photo by Laura Reinhardt) 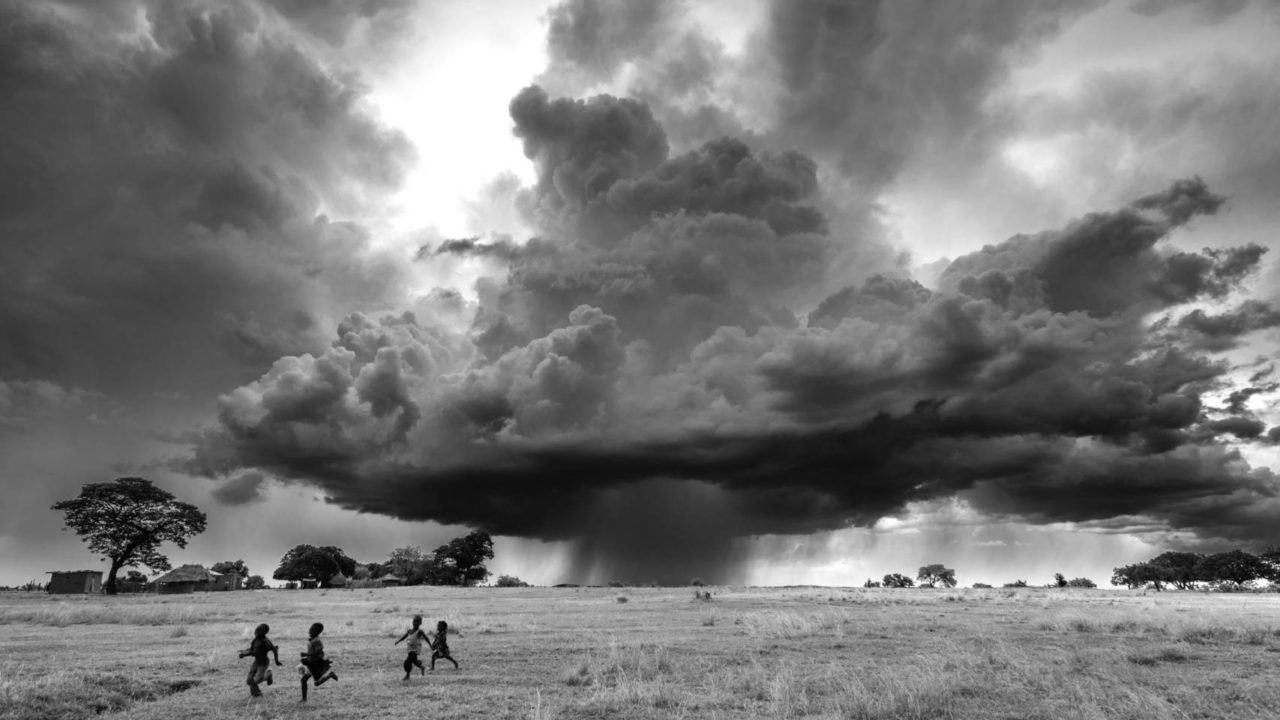 Children run across a field as storm clouds bring rain to a village in Magoye, Zambia. The clouds looked ominous to me, but the farmers there were delighted for rain after months of drought. (©2016 World Vision/photo by Jon Warren) 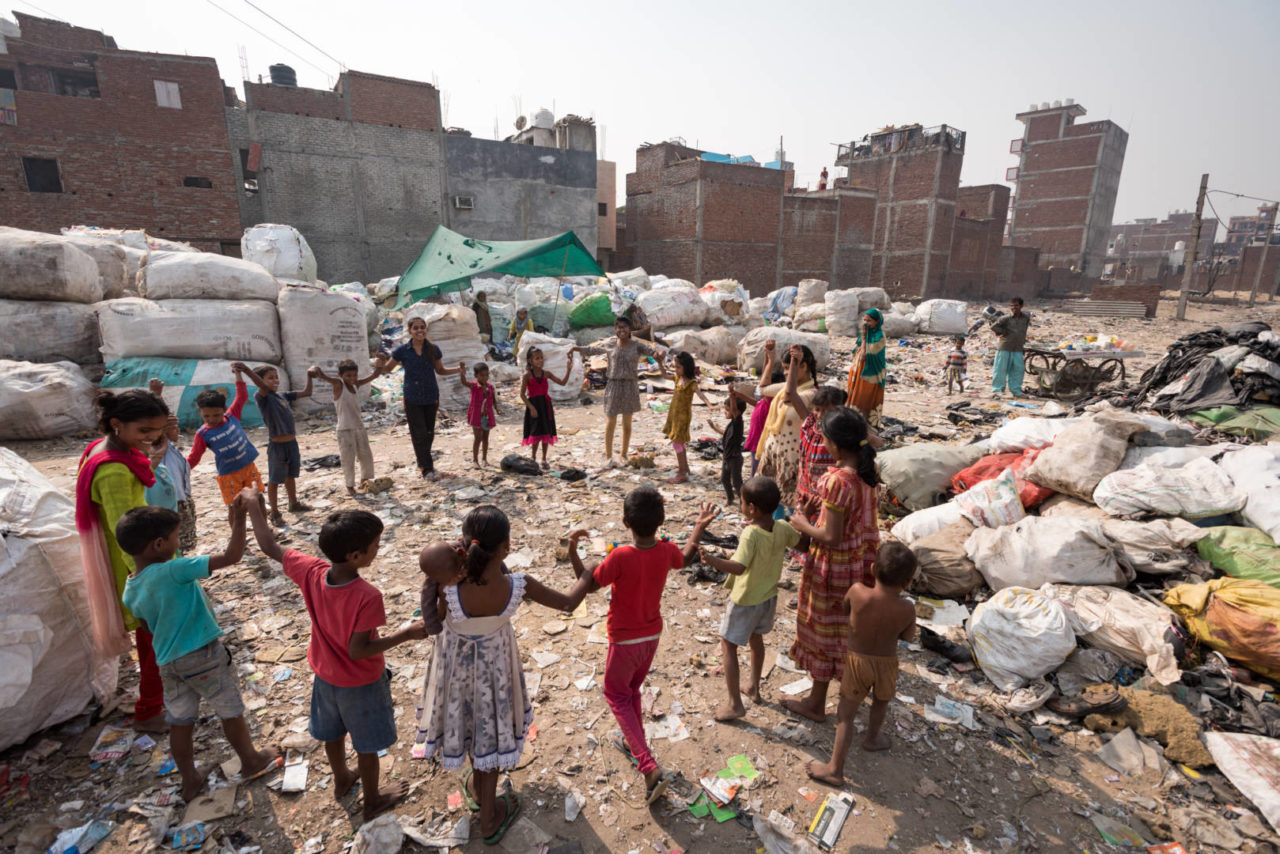 When people ask about my visit to India, I tell them about 15-year-old sponsored child Arti in south Delhi. Despite her own challenging circumstances, Arti (center) spends a few days a week playing games, teaching hand-washing techniques, and tutoring children living in a nearby garbage dump. Witnessing the inspiration she brings to this community has challenged my own capacity to give and think of others ahead of myself. (©2016 World Vision/photo by Eugene Lee) 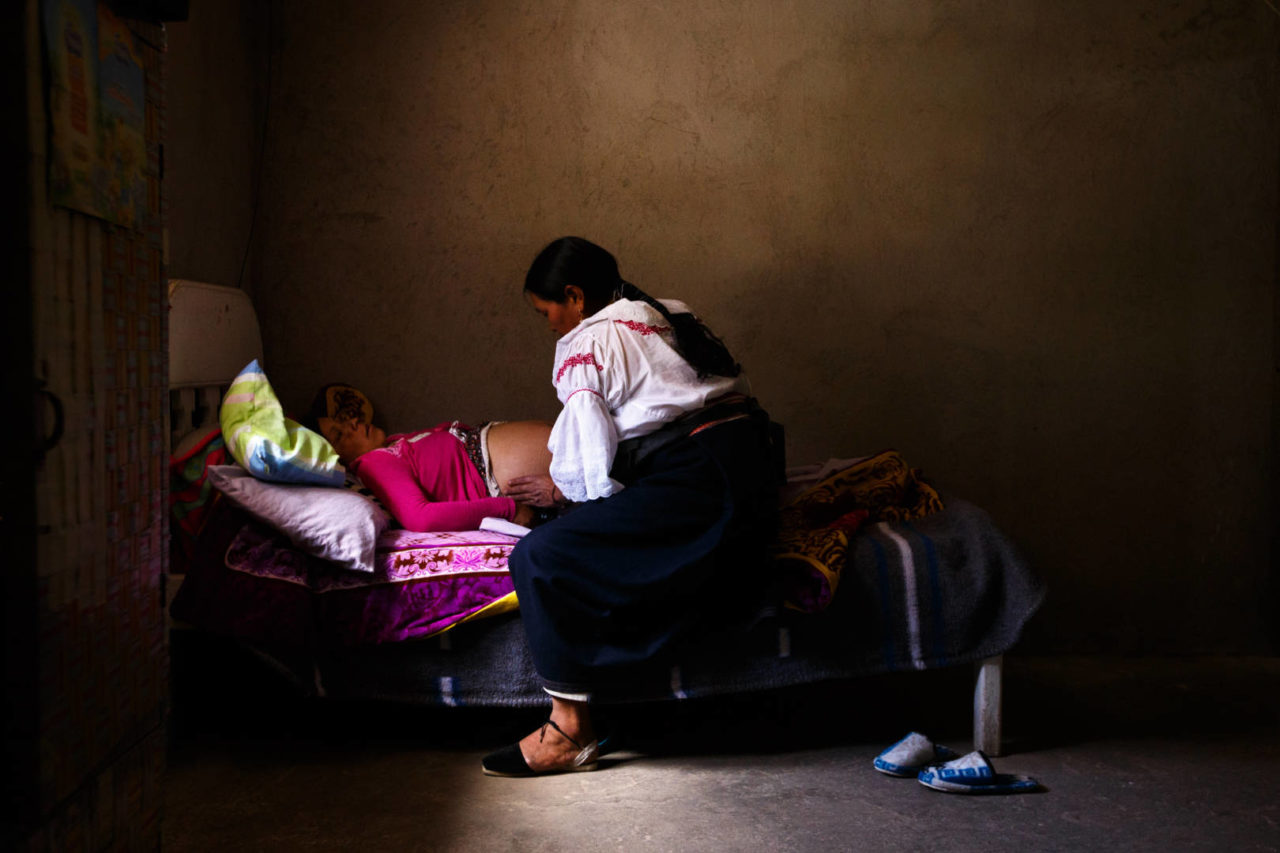 During a routine visit to Miriam Alvarez’s home in Otavalo, Ecuador, midwife Mercedes Muenala, 53, gently examines Miriam, who is 34 weeks pregnant with her second child. One of 50 midwives serving the area, Mercedes has done this work for years, supported by World Vision to provide care for expecting mothers. Miriam was gracious to let me into her modest home to get a glimpse of life with a midwife. I had 10 minutes to capture something. All the elements came together — Mercedes’ attire and posture, her hand pressing on Miriam’s abdomen, Miriam’s concentration or discomfort, the light from a window draping the wall and bed, and Miriam’s slippers beside the bed. It all says, “Don’t worry. I’ll take care of you.” (©2016 World Vision/photo by Chris Huber) 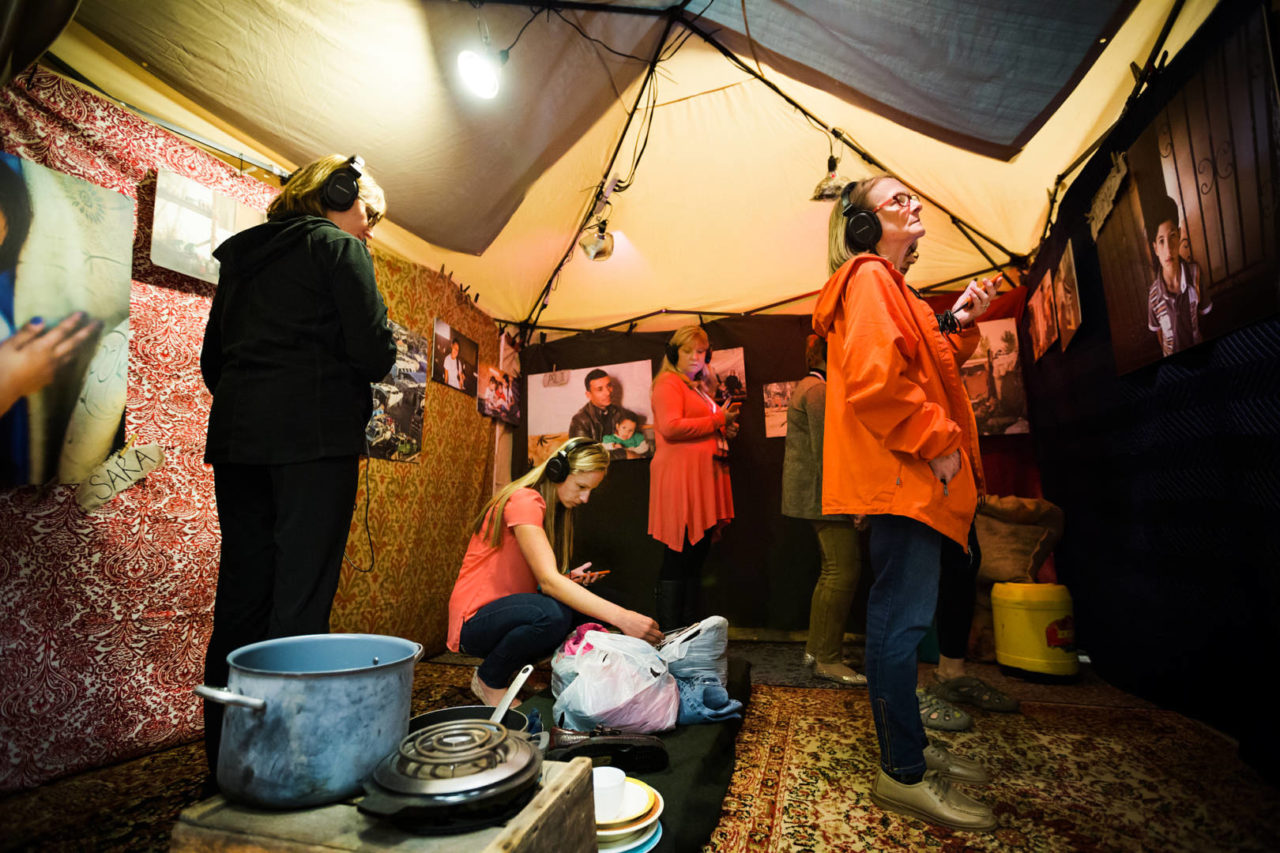 World Vision’s Child Ambassadors understand God’s heart for vulnerable children. They connect people from our own communities in the U.S. with children living in extreme poverty to forever change their world through child sponsorship. Along with the World Vision Experience truck and virtual reality exhibit, Child Ambassadors use this refugee camp in churches across America to immerse people in the lives of Sara, Ali, and Ahmad — refugee children. What’s special about this photo is that the refugee camp isn’t set up in a church this time. It’s set up in World Vision’s chapel in Federal Way so these Child Ambassadors can “meet” Sara, Ali, and Ahmad for the first time. (©2016 World Vision/photo by Heather Klinger) 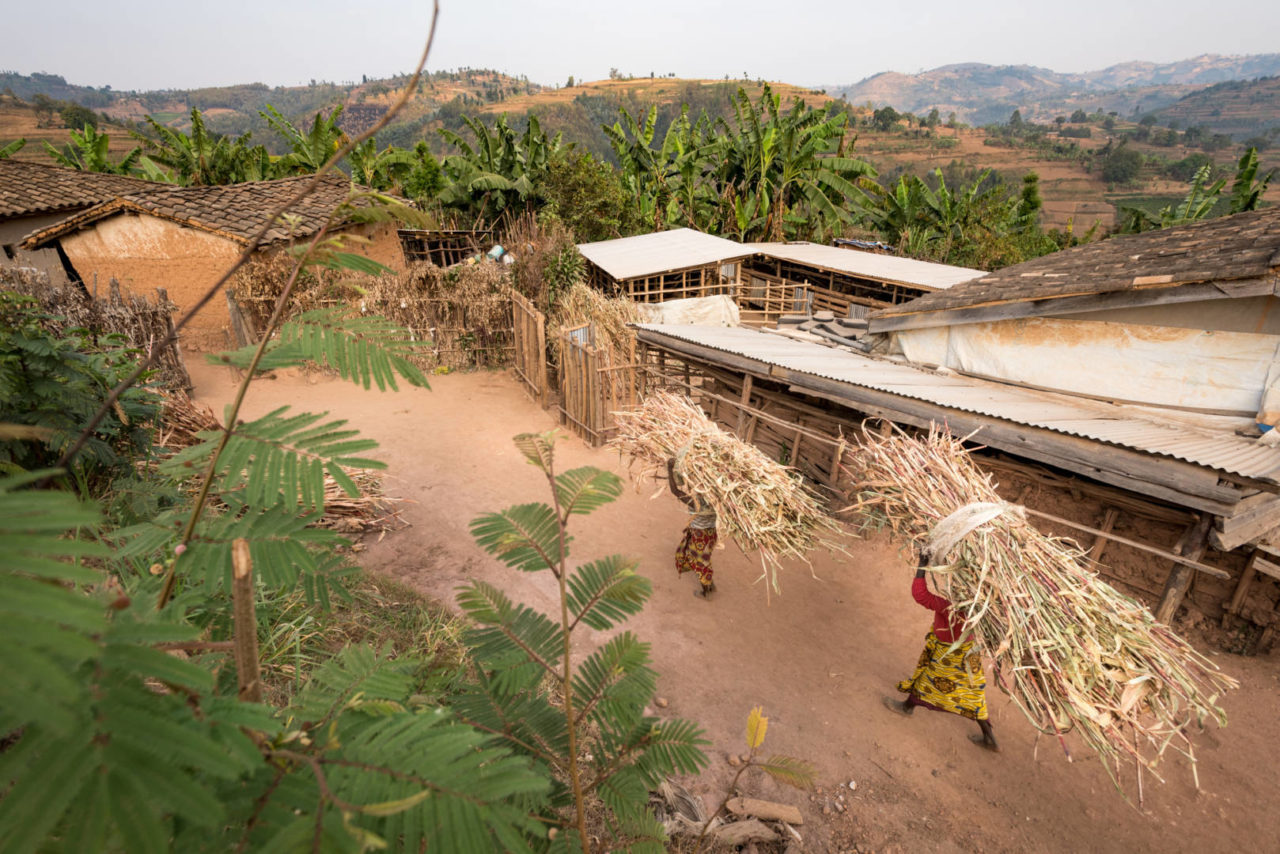 It’s tough to imagine genocide amidst Rwanda’s lush terraced hills, set against striking reddish dirt. It’s breathtaking and idyllic at the same time. As I took in the scene at this farmer’s home I composed the shot and waited. The women walking in completed the picture. To me they don’t carry the weight of the past anymore; they’re carrying the means to their own self-determination, one step at a time. (©2016 World Vision/photo by Eugene Lee) 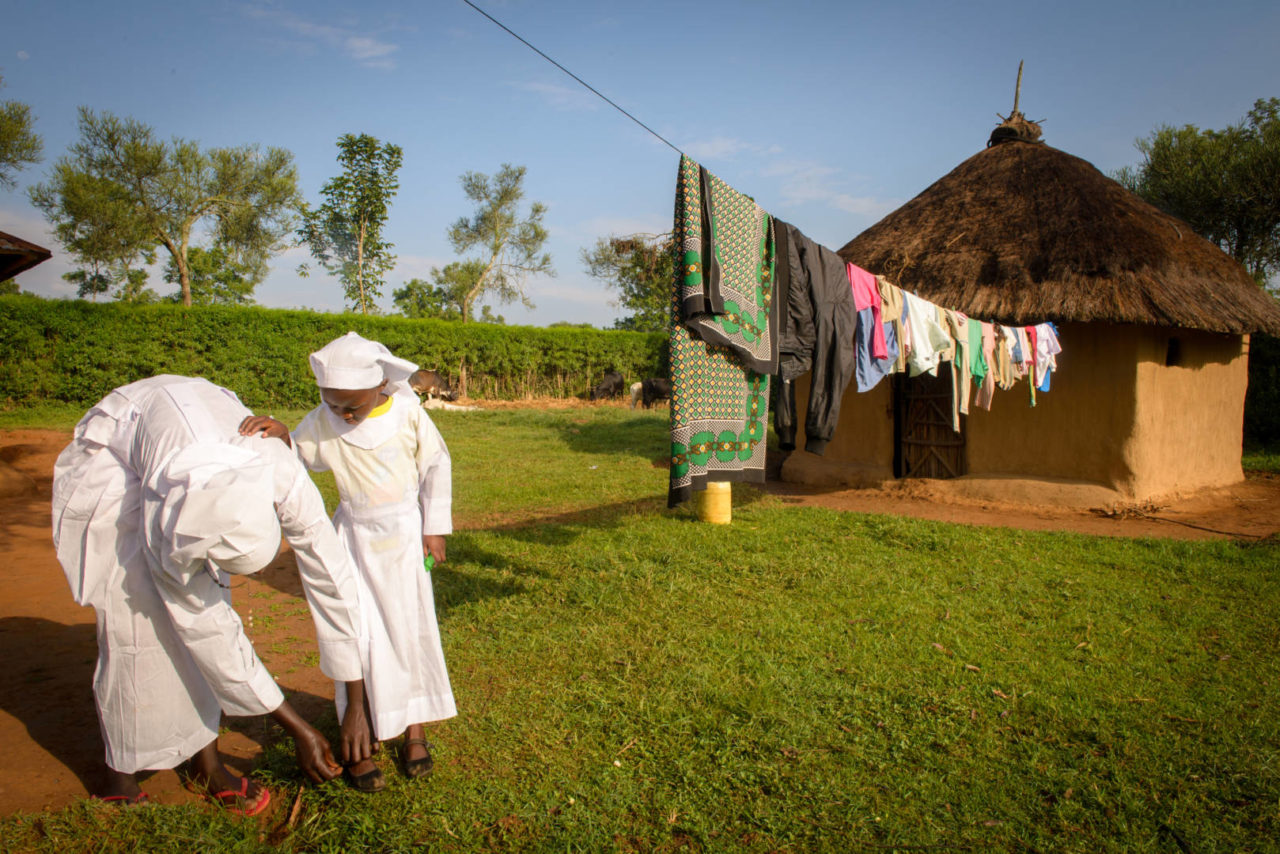 Sometimes photos happen while you are waiting for something else. I wanted some photos of little Lucy taking clothes off the clothesline. But then her mother, Ann Penina, bent to fix the strap on Lucy’s shoe. From where I stood, I could capture the hut in the background, which gave the photo a quick geographic reference — Kenya, to be exact. It was much better than the photo I initially envisioned. (©2016 World Vision/photo by Laura Reinhardt) 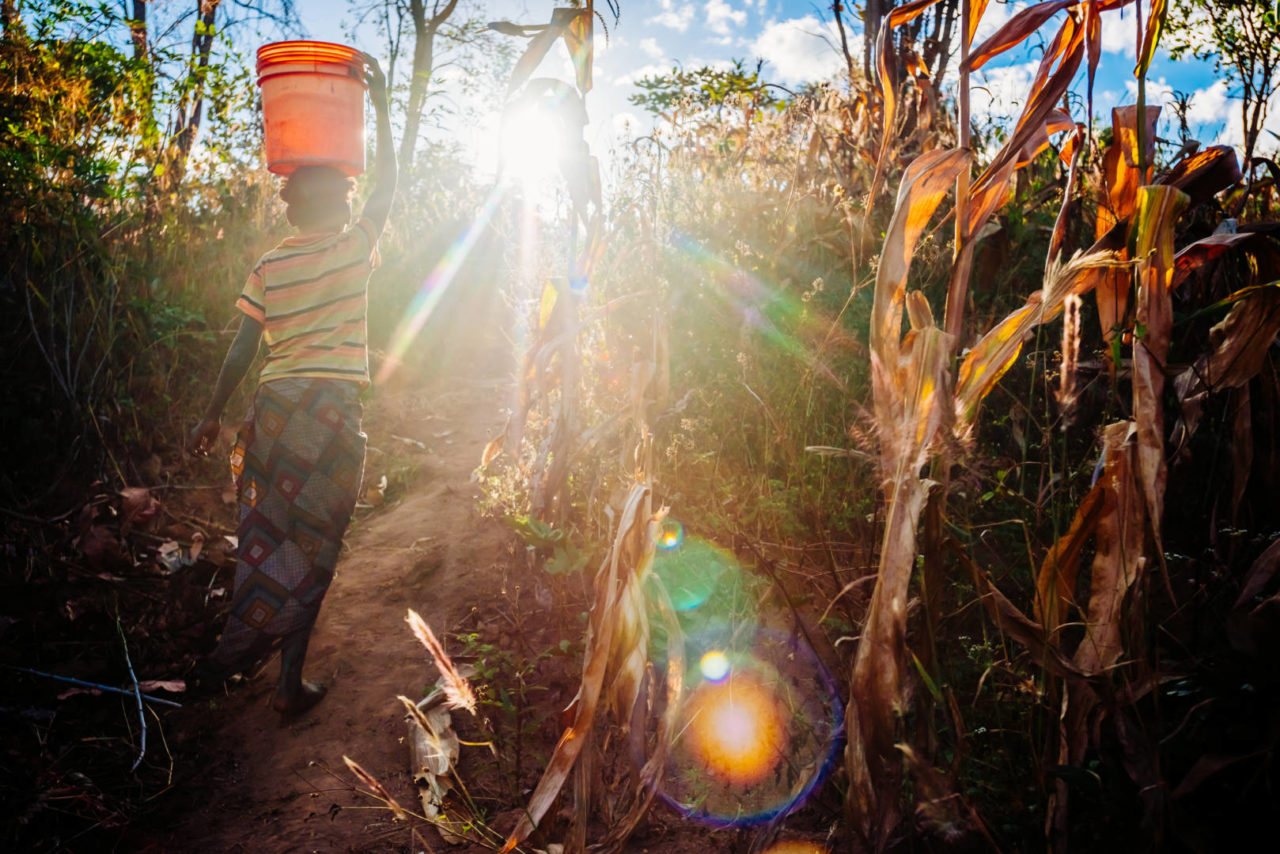 I had to run to keep up with 9-year-old Ruth as she raced home from fetching water in Mwamba, northwestern Zambia. This time she had only one bucket, but sometimes she carried two on her head, making multiple trips each day. Snakes on the path and a sore back weren’t the only dangers. Children in her community had died from drinking the contaminated water. And her family had stopped going to church because it was so hard to get enough clean water to wash up beforehand. But only a couple months after I got back from covering this story, I received a wonderful gift via email — a picture of smiling Ruth pumping clean drinking water from a new World Vision borehole near her home! (©2016 World Vision/photo by Jon Warren)