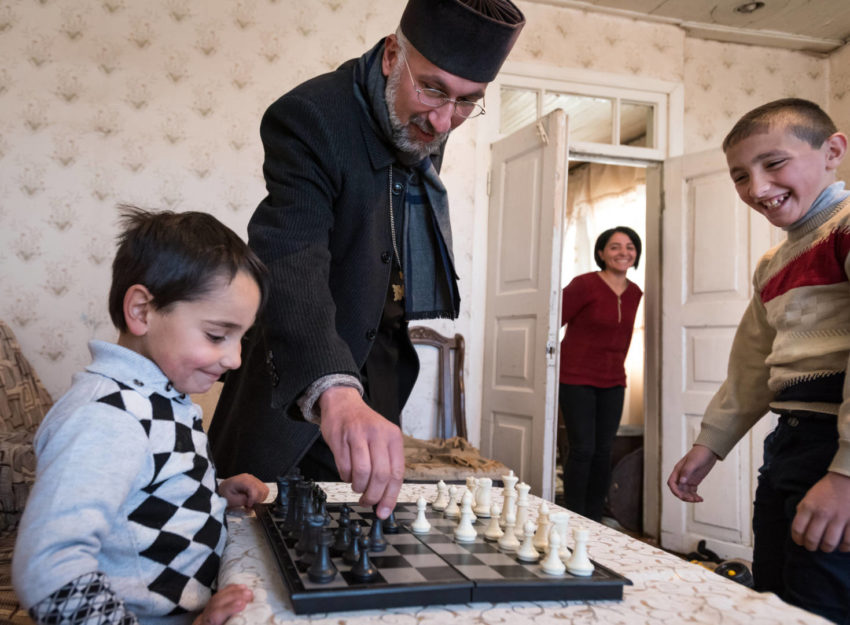 Father Ter-Psak makes a joke and leans in to move a chess piece. (©2017 World Vision/photo by Eugene

From Armenia to Zambia and everywhere in between, World Vision’s photographers travel around the world to tell stories of heartache and hope. In 2017, they captured hundreds of moments in thousands of frames. Here are our favorite photos from 2017 and the stories behind them. 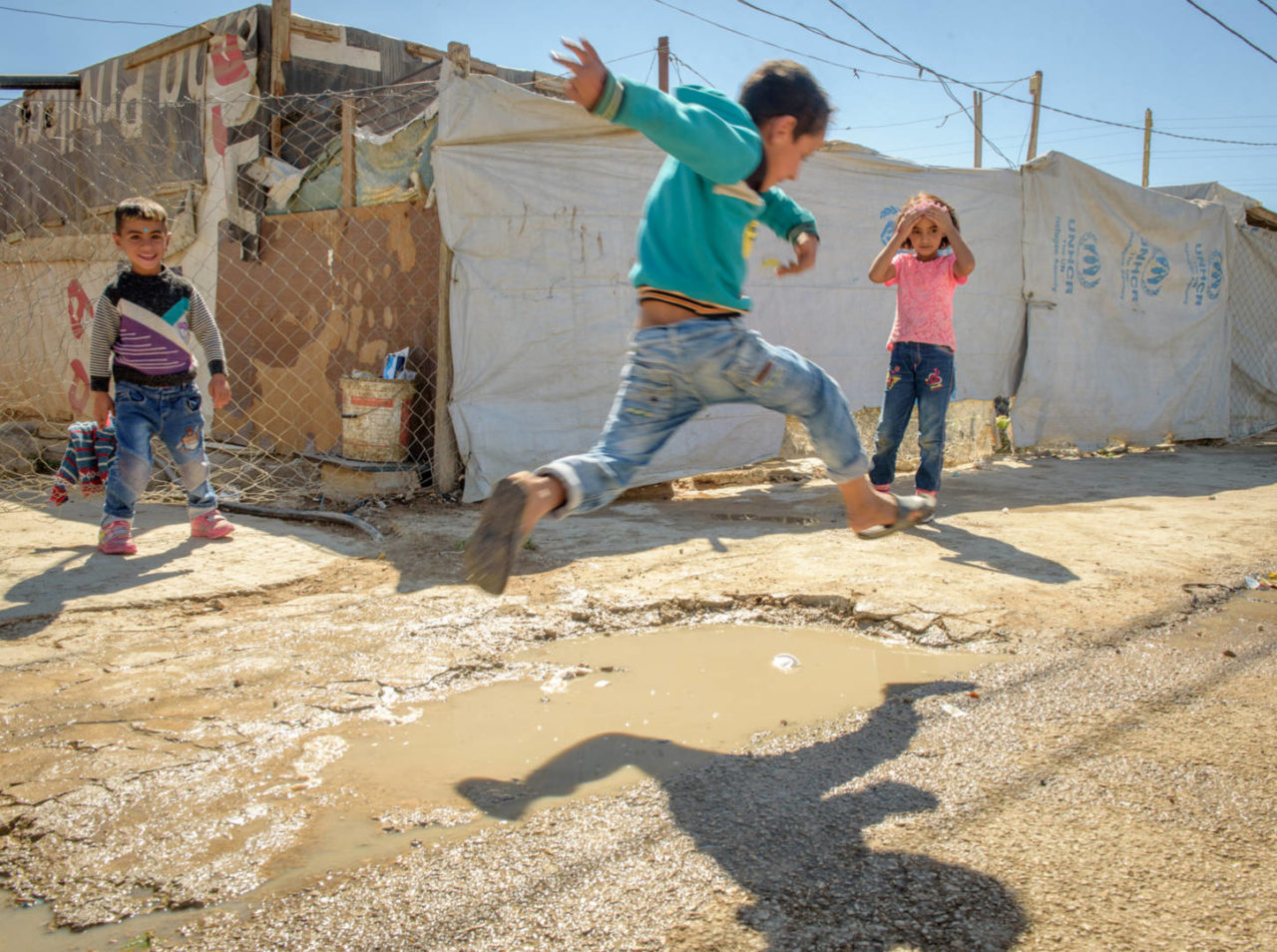 This year in Lebanon I visited an informal tent settlement. I started by photographing a couple of little boys who were jumping over this puddle. Then as I was crouching down, an older boy came soaring into the frame.  Sometimes as a photographer, you can plan all you want, but then the moment happens and all you can do is hang on and hope that your camera settings were right to capture the magic. Thankfully, this was one of those times. (©2017 World Vision/photo by Laura Reinhardt) 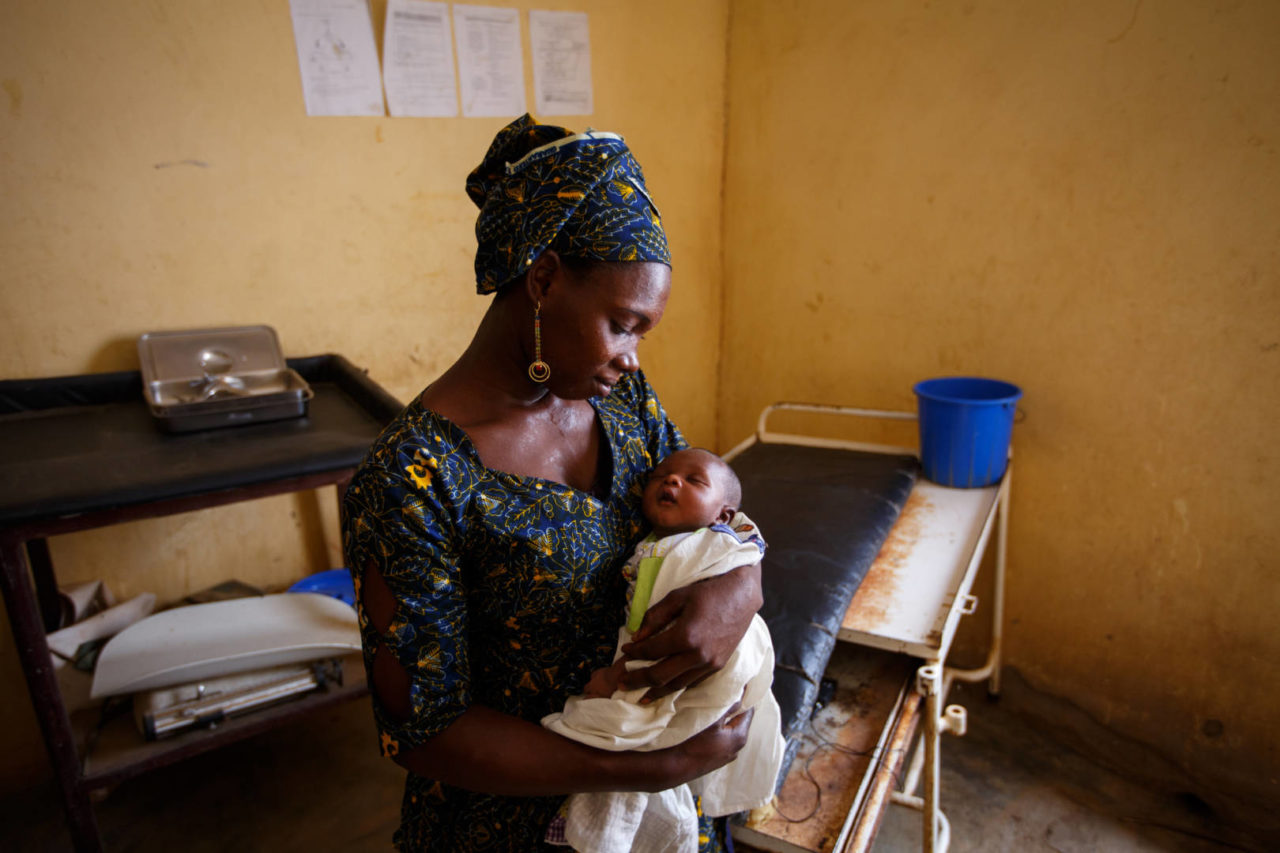 Tenimba Konare, 21, holds her 2-week-old son, Queneque, in the room at Manta Health Care Center where she delivered him. Up until this week in early June, the clinic staff had struggled to keep the facility adequately clean for patients and delivering mothers due to a lack of clean water and sanitation. Tenimba is a little more content knowing that future check-ups will be safer because of the clean water coming from the new borehole just outside the front entrance. The clinic now has hand-washing stations, clean water for drinking and washing, and supplies to sterilize equipment and instruments. (©2017 World Vision/photo by Chris Huber) 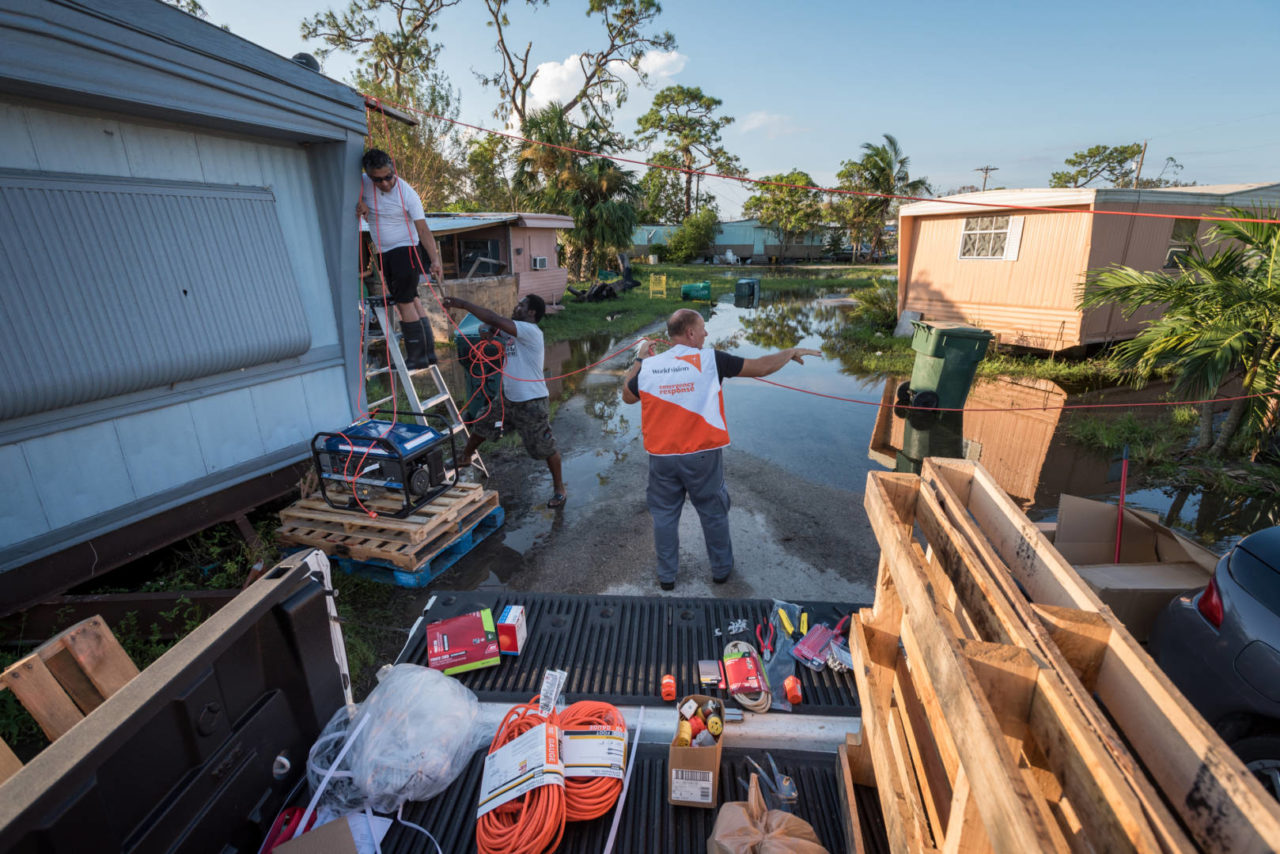 With no electricity after Hurricane Irma, I found myself rushing to every hardware store in Immokalee, Florida with World Vision’s emergency logistics expert Rich Moseanko. He cleaned out every location of their heavy-duty extension cord, outlet plugs, and splicing tools. Setting up shop in the back of a pickup, Rich custom-wires five trailer-homes to a donated generator. Now people can refrigerate food, run cooling fans, and charge phones to stay connected to family. In the aftermath of any disaster, you can only do the best you can with what have. And for this neighborhood, Rich did just that. (©2017 World Vision/photo by Eugene Lee) 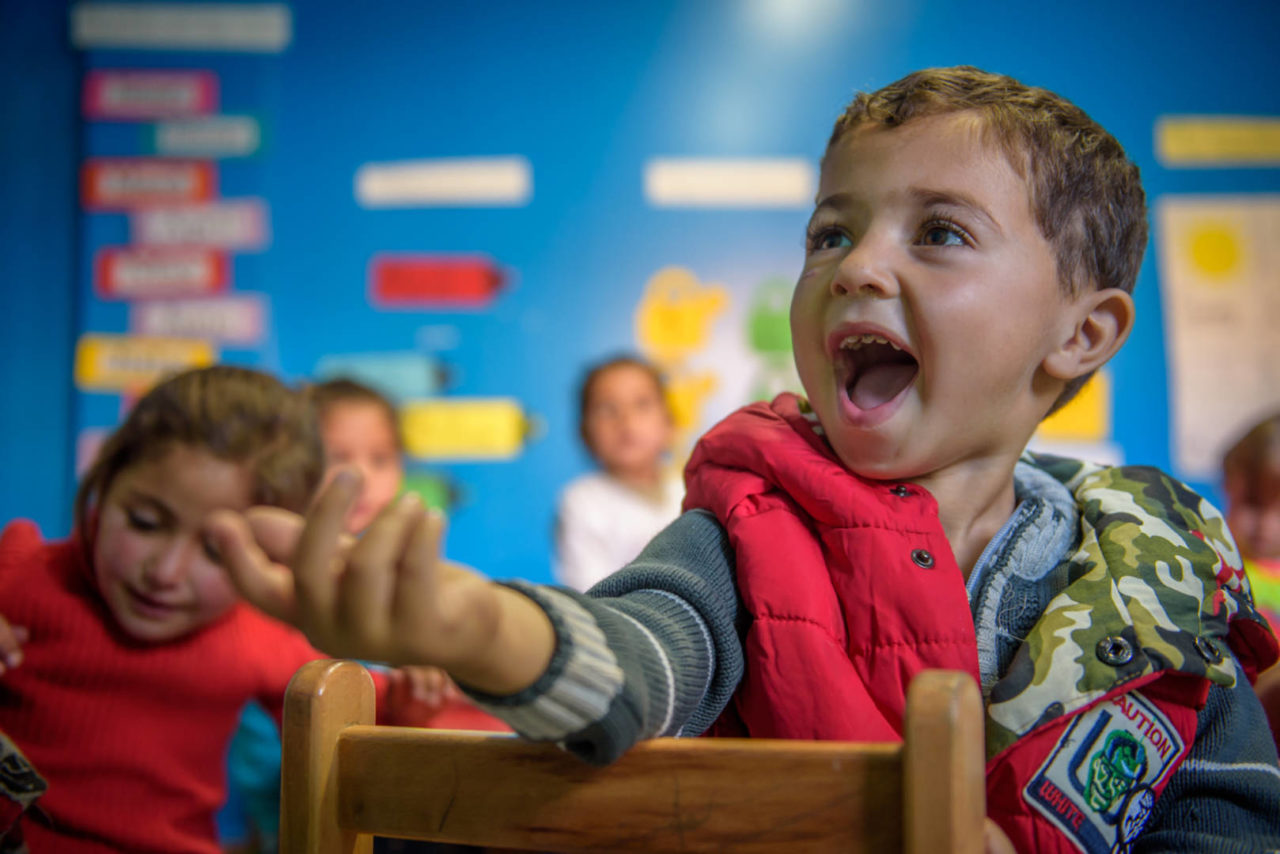 In a World Vision Early Childhood Education center in Lebanon’s Bekaa Valley, Mohammed reacts to something his teacher tells him. I loved the fact that despite the hardship these children face as Syrian refugees, there’s a place they can go that offers them fun learning time, vivid colors, and most important, a chance to just be children. That special place goes a long way toward making sure that these children won’t end up as a “lost” generation. (©2017 World Vision/photo by Laura Reinhardt) 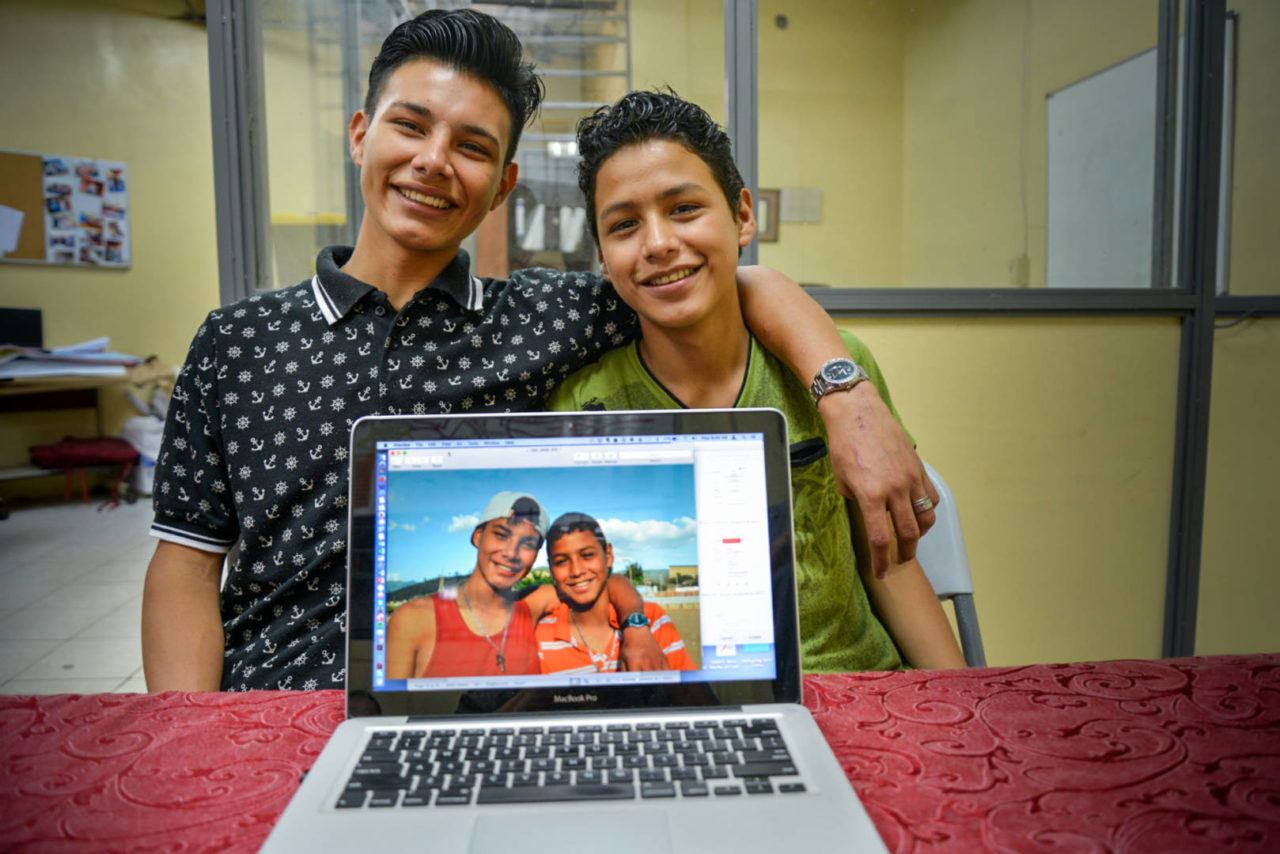 This is a picture of answered prayers. A year ago, Enil, left, was a troubled teen in a dangerous neighborhood in Honduras. He dressed like a gang member, a pathway that would lead him to despair — or even death. But at the encouraging of his younger brother, Henry, he began a World Vision technology program, learning computer skills and entrepreneurship. World Vision staff enveloped him in love and prayers. Today, Enil is a changed young man with a new direction, new clothes, and a new heart. Enil wants to become a teacher and is a role model to Henry. (©2017 World Vision/photo by Kari Costanza) 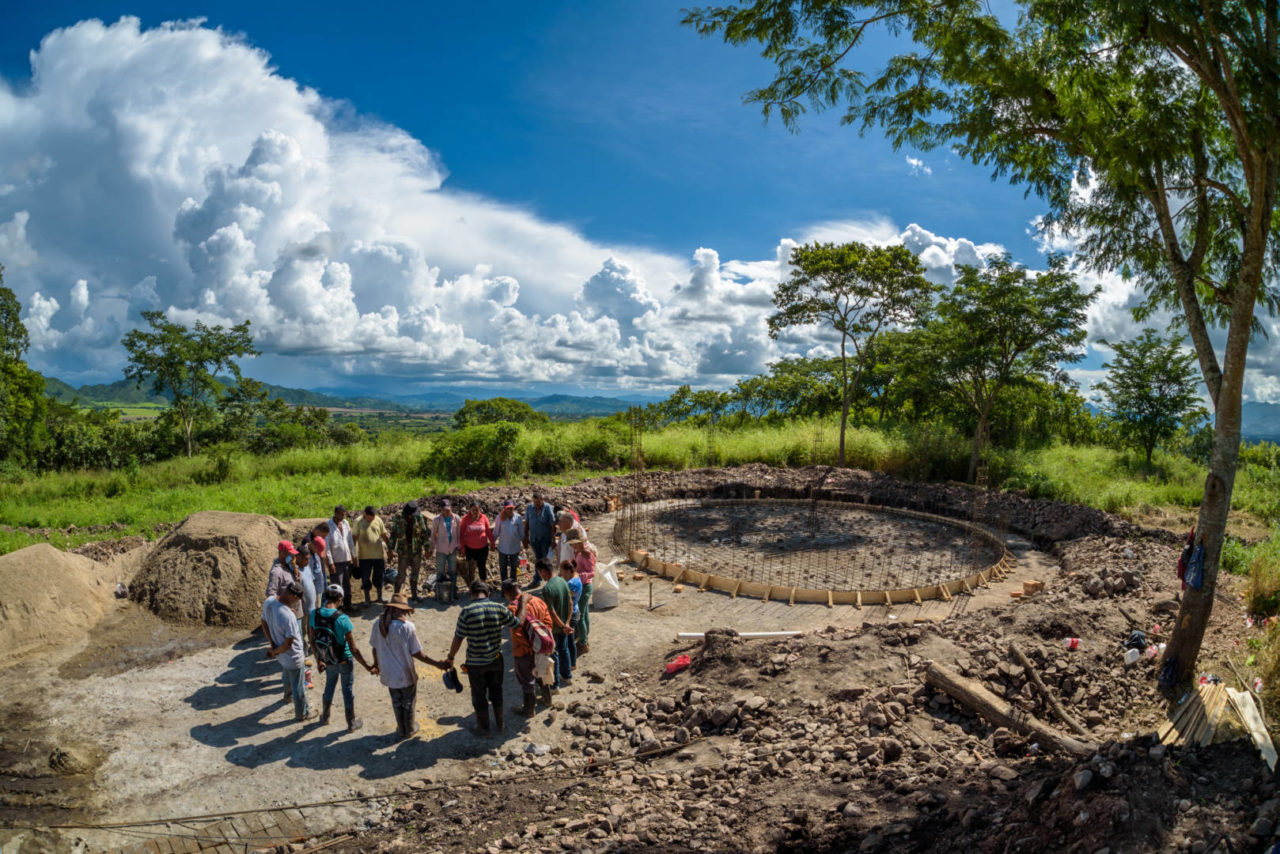 Community volunteers in Honduras join hands in prayer at the end of a day constructing a new water tank — their prayer circle echoing the footprint of the tank that will provide clean water to 3,000 people. World Vision provides materials, but the community is doing all the hard work, including hand-digging 26 miles of trenches. Persistence and prayer will soon change lives. (©2017 World Vision/photo by Jon Warren) 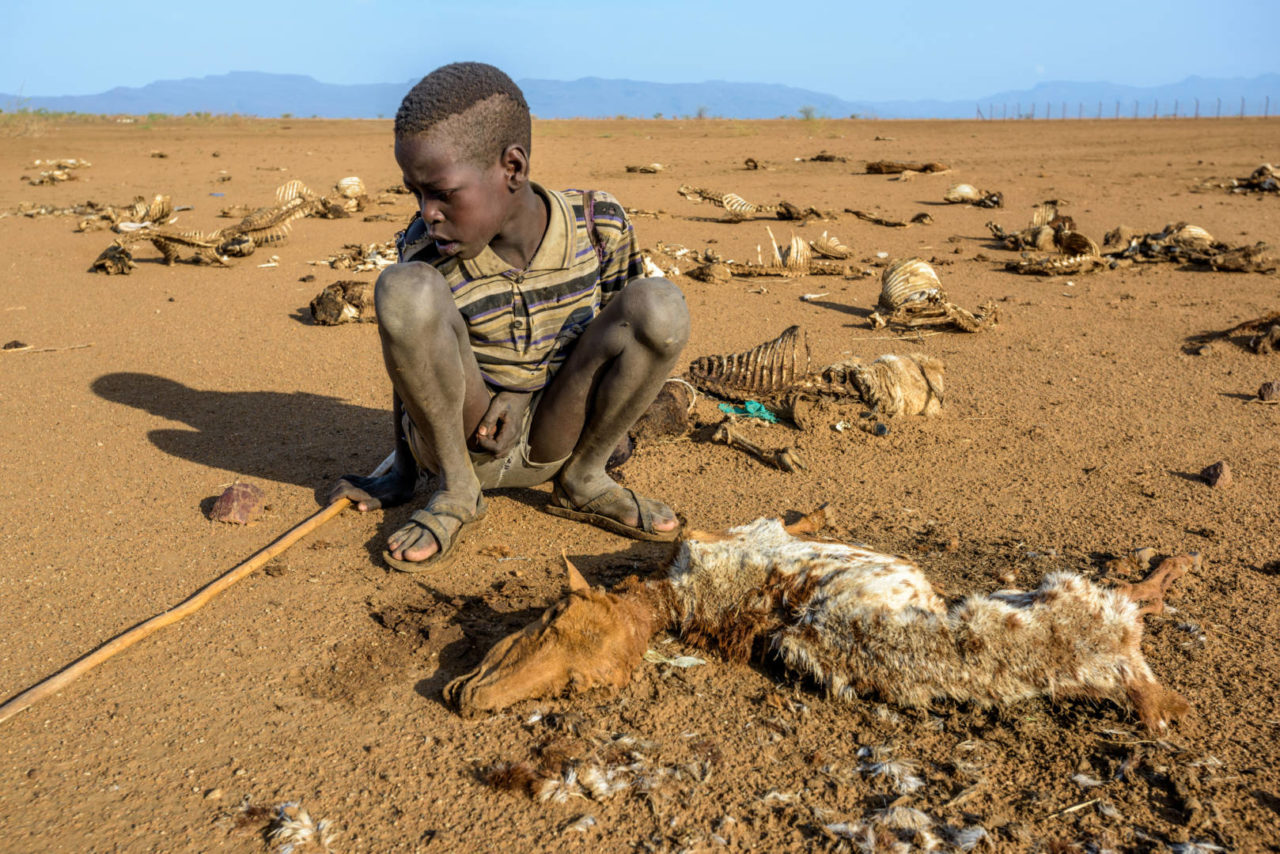 Ejiem was broken-hearted by the death of his favorite sheep, Merireng, and so was I when I photographed him in Turkana, Kenya. Hunger and drought are even more awful up close. I haven’t been able to get Ejiem out of my heart. Frequent updates from field staff provide a happy ending to this story, with World Vision providing Ejiem’s community a new water project in January 2018. By allowing me to photograph him and by sharing his story, Ejiem generated prayer, compassion, and generous giving not only for himself, but also for his community and even others he’s never met. (©2017 World Vision/photo by Jon Warren) 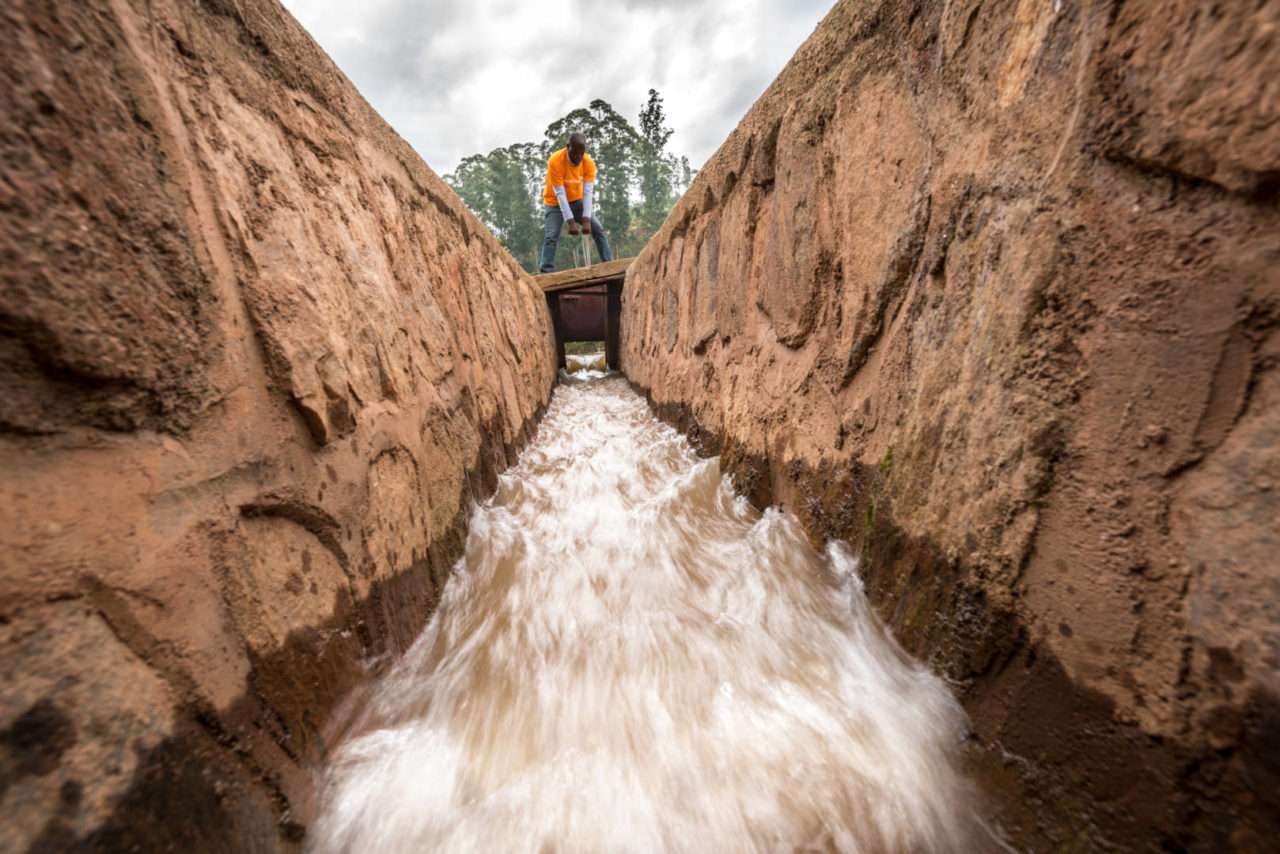 I wanted to show the scale of this World Vision water-intake and canal system in an aerial picture. But I found myself on location with no drone, so I decided to go as low as possible. With the camera a few inches above the water, I slowed the shutter way down. My hope was to convey the energy of water — not just in movement but the potential it might bring to more than 420 farmers downstream who are now going to be able to grow year-round — even during dry season. “I’m so excited because I’m thinking how much I’m going to harvest out of this!” one farmer said. (©2017 World Vision/photo by Eugene Lee) 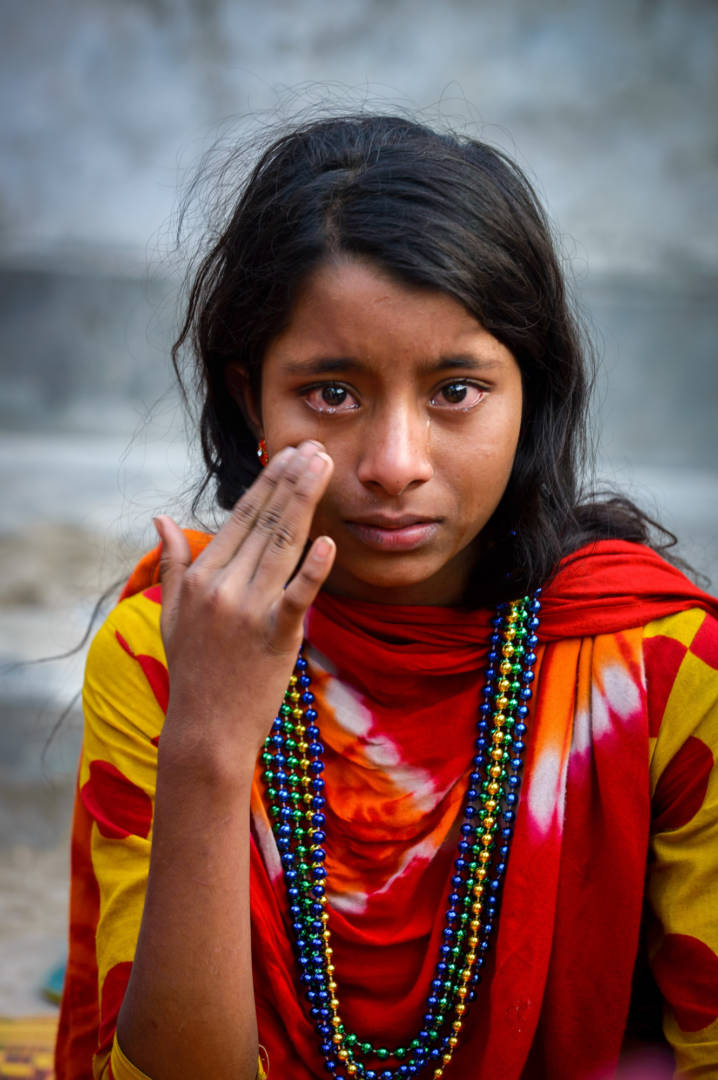 In Bangladesh, I accompanied donors who were learning about World Vision’s child protection programs. On this particular day, the women sit outside with a group of girls who shared about their lives working in the shrimp factory — the long hours squatting, the icy conditions that keep the shrimp cool but their hands numb with cold, and the cuts the shrimp caused. Tears flowed freely on all sides. As 11-year-old Ima told her story, she wiped away her tears and made eye contact with me. I’m thankful that my own tears didn’t keep me from getting the shot. (©2017 World Vision/photo by Laura Reinhardt) 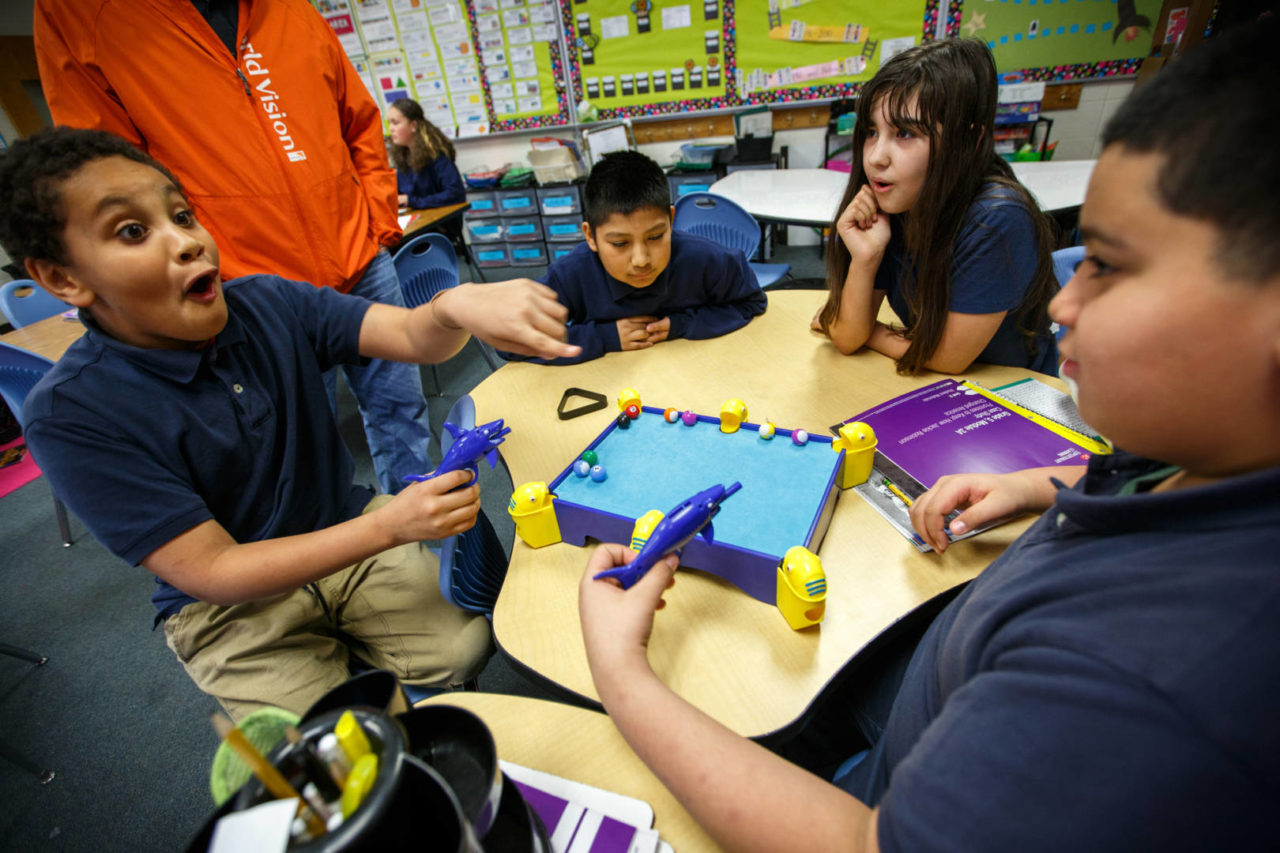 Children at Parkville Community School in Hartford, Connecticut play games during indoor recess on a rainy day in April. The teachers at their school visit World Vision’s local Teacher Resource Center a couple of times per year to pick out supplies, materials, activities, and games like this one to ensure their students enjoy learning and have something to do when it’s too wet to play outside. In 2017, World Vision and its corporate partners provided backpacks and school supplies to hundreds of thousands of students across the United States. (©2017 World Vision/photo by Chris Huber) 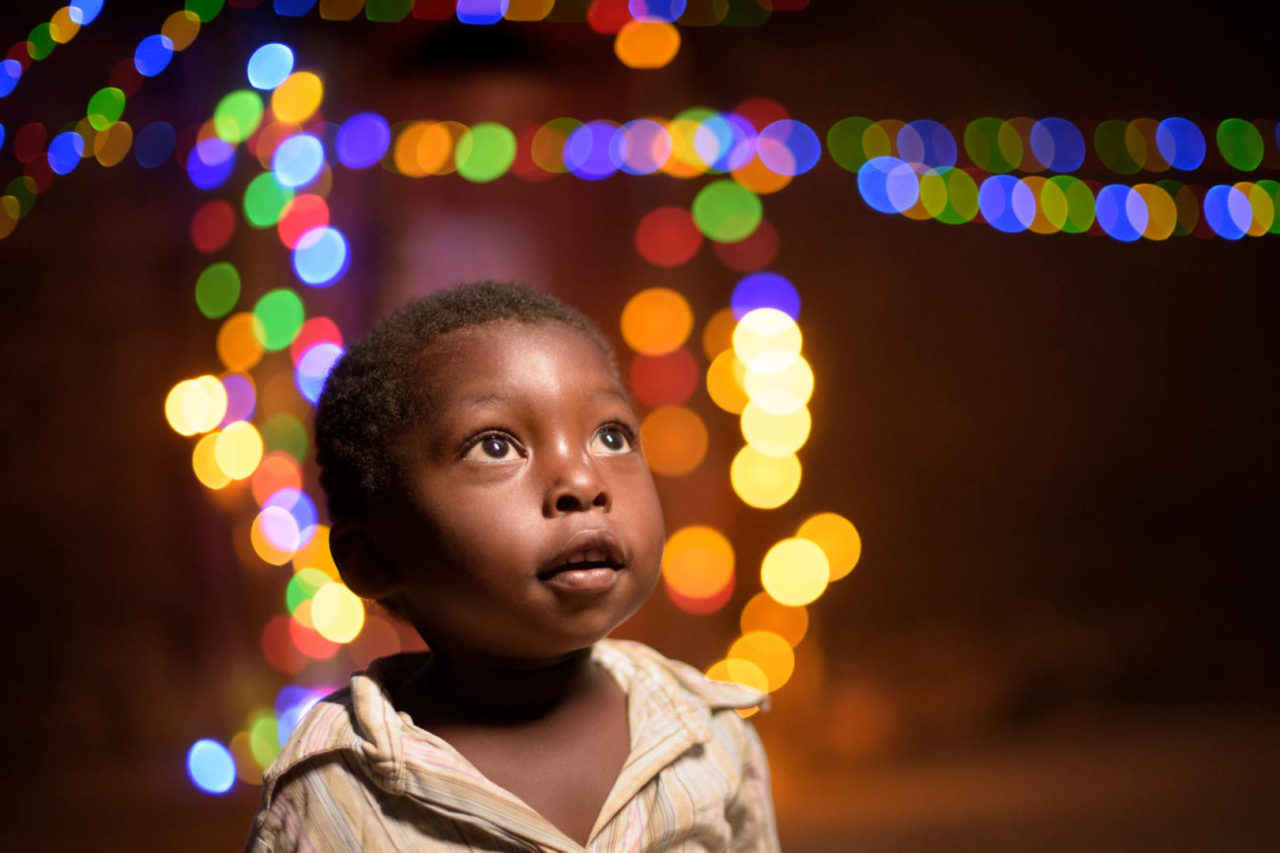 Her name says it all — Beauty! I was supposed to be concentrating on Beauty’s 5-year-old sponsored brother, Chansa, but I was as dazzled by this 17-month-old toddler as she was by the Christmas lights. Beauty’s future in Zambia is bright. (©2017 World Vision/photo by Jon Warren) 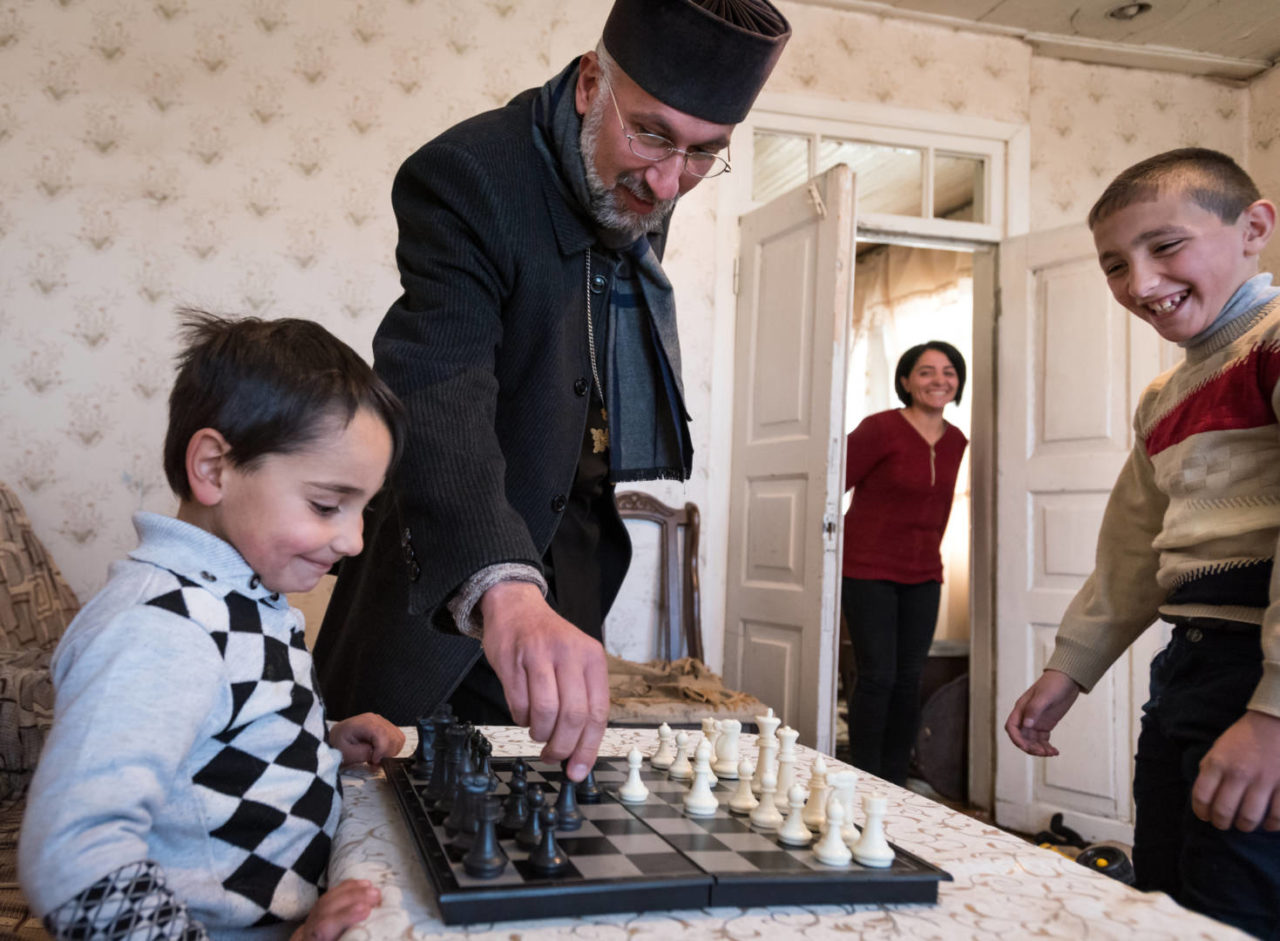 I find chess and photography similar — they both require anticipation. In Armenia, my challenge was to show the loving relationship between this priest and family. I waited, observed, and followed the brothers hoping for genuine moment. After more than 90 minutes I still didn’t have anything I liked. The boys finally brought out a chessboard (it’s Armenia’s national game). I immediately saw the potential and framed the game between the boys. Then all the pieces moved into place: Father Ter-Psak makes a joke, leans in to move a piece, and their mother turns to see the fun. (©2017 World Vision/photo by Eugene Lee) 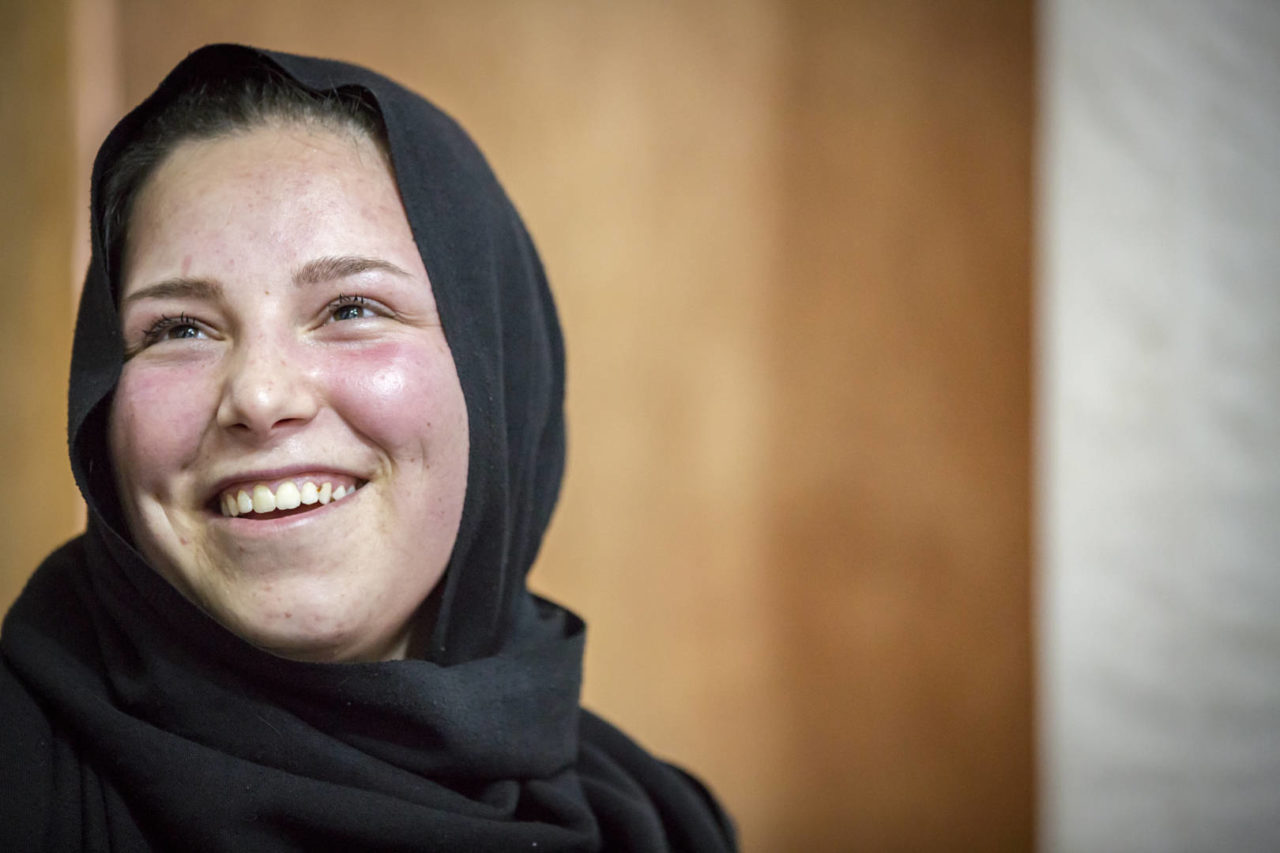 Sarah’s brilliant smile masks the sadness in her heart. “I can’t be sad all the time. What’s in the heart is not always what shows,” says the 18-year-old Syrian refugee living in the Bekaa Valley of Lebanon. It was such a profound statement I didn’t expect at the time. Only moments before, I was admittedly photographing the kittens Sarah had placed on the floor of her family’s tent, her joy exuding remnants of the childhood the woman standing before me had stolen from her. Her dream was to become an engineer or a teacher, but now, “God only knows what I will be,” she says. Her maturity and spirit caught me off guard; now her story will stay with me forever. (©2017 World Vision/photo by Heather Klinger) 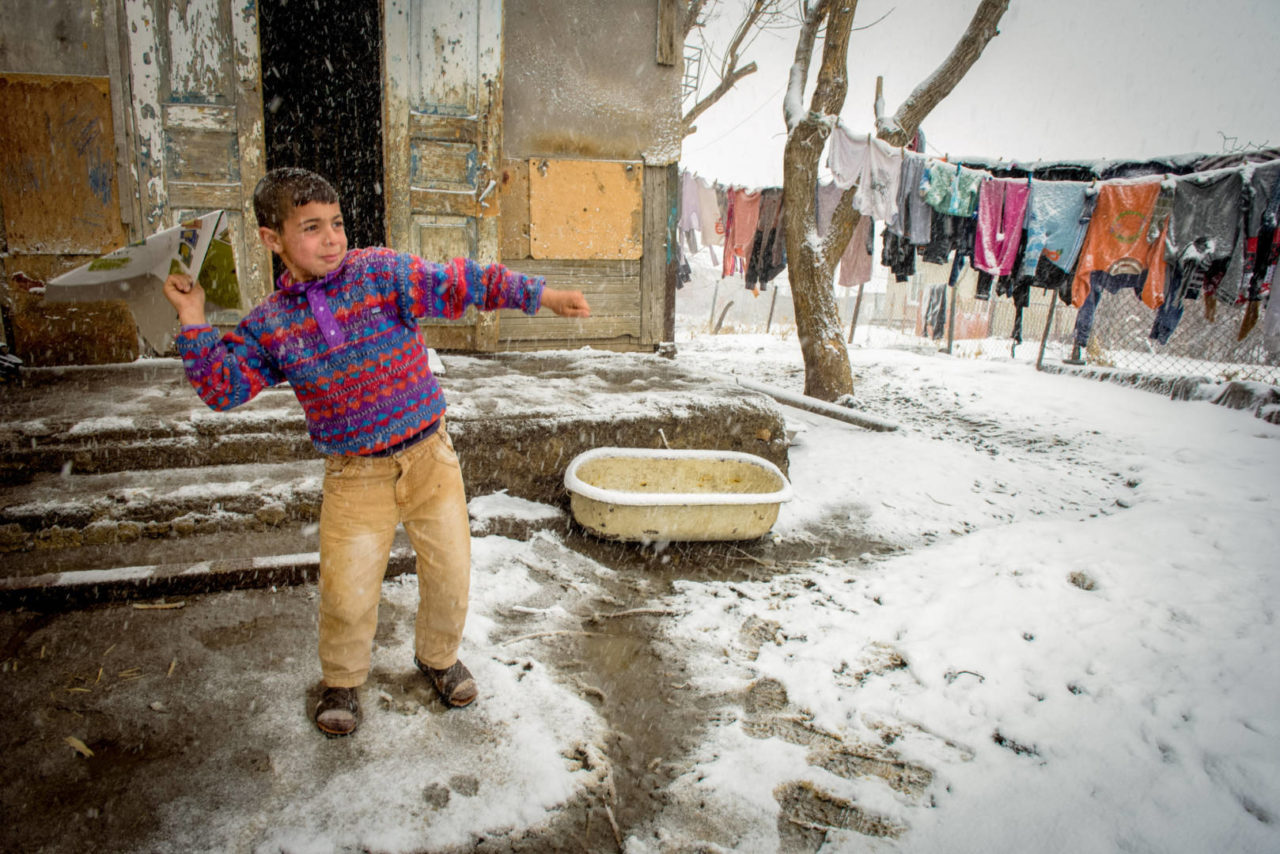 Even after working as a photojournalist for 10 years, I’m still delighted at people’s capacity to surprise me. It’s one of the things I love about this work. Seven-year-old Ashot from Armenia didn’t hesitate at all to go outside despite his lack of winter boots and the heavy snow falling. I tried to work quickly to get the photo, but he wasn’t in a hurry to go back inside. In fact, he decided he wanted to fly a paper airplane in the snowstorm. That was definitely a journalist first for me. (©2017 World Vision/photo by Laura Reinhardt) 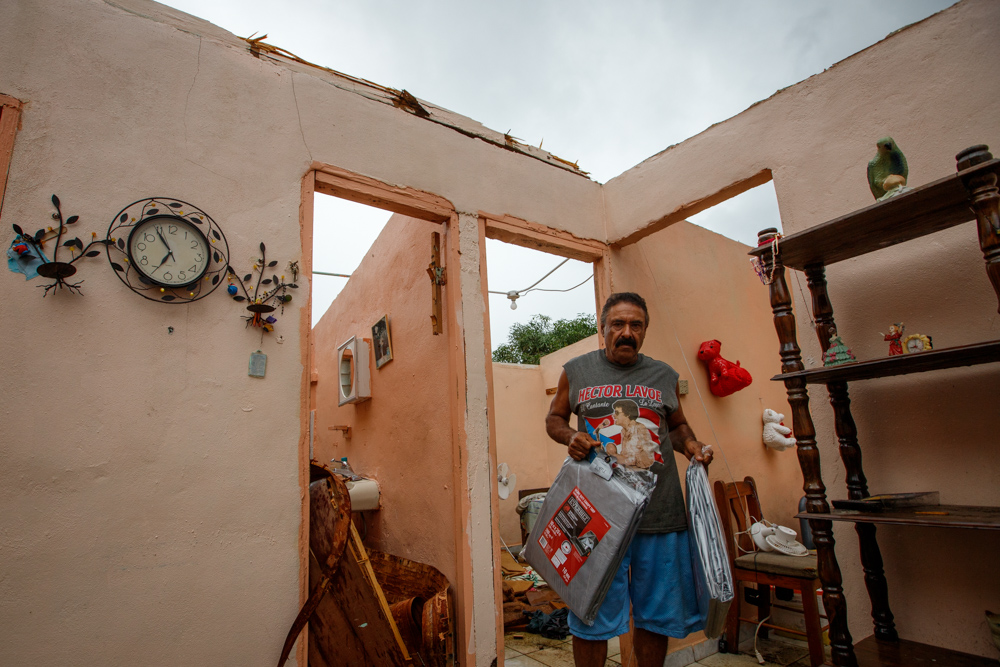 Jose Alvarez, 60, stands in his rain-soaked home near Utuado, Puerto Rico after Hurricane Maria tore the roof off. He and his wife received tarps, food, water, and other supplies from World Vision and Calvary Church. The monster storm devastated most of the U.S. territory when it swept through with 160-mph winds Sept. 20. It killed dozens, knocked out power to all 3.5 million residents, and caused catastrophic flooding and landslides that crippled the island. (©2017 World Vision/photo by Chris Huber) 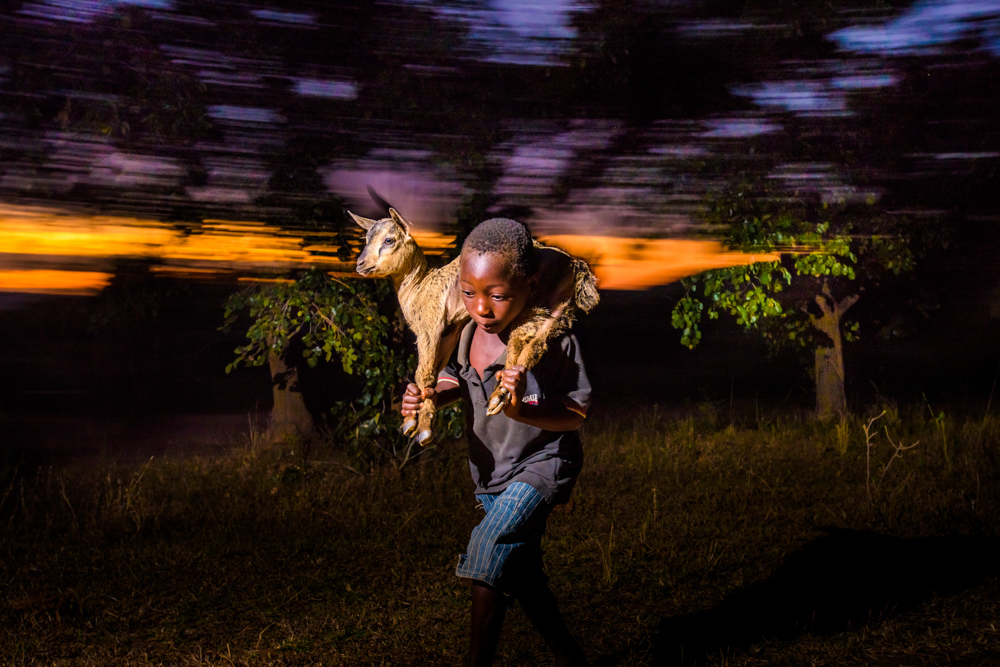 At sunset in Zambia, Nathan carries a goat. This goat is a special goat. Nathan’s family received it from a family in Zambia, who received goats from another family in Zambia, who received goats from a family in the U.S. through the World Vision Gift Catalog. While Nathan herds his family’s goats, I waited and waited for the animals to get close to him so I could get them together in the same frame. When he gently calls, they come. Nathan loves his goats, and they trust him. (©2017 World Vision/photo by Jon Warren) 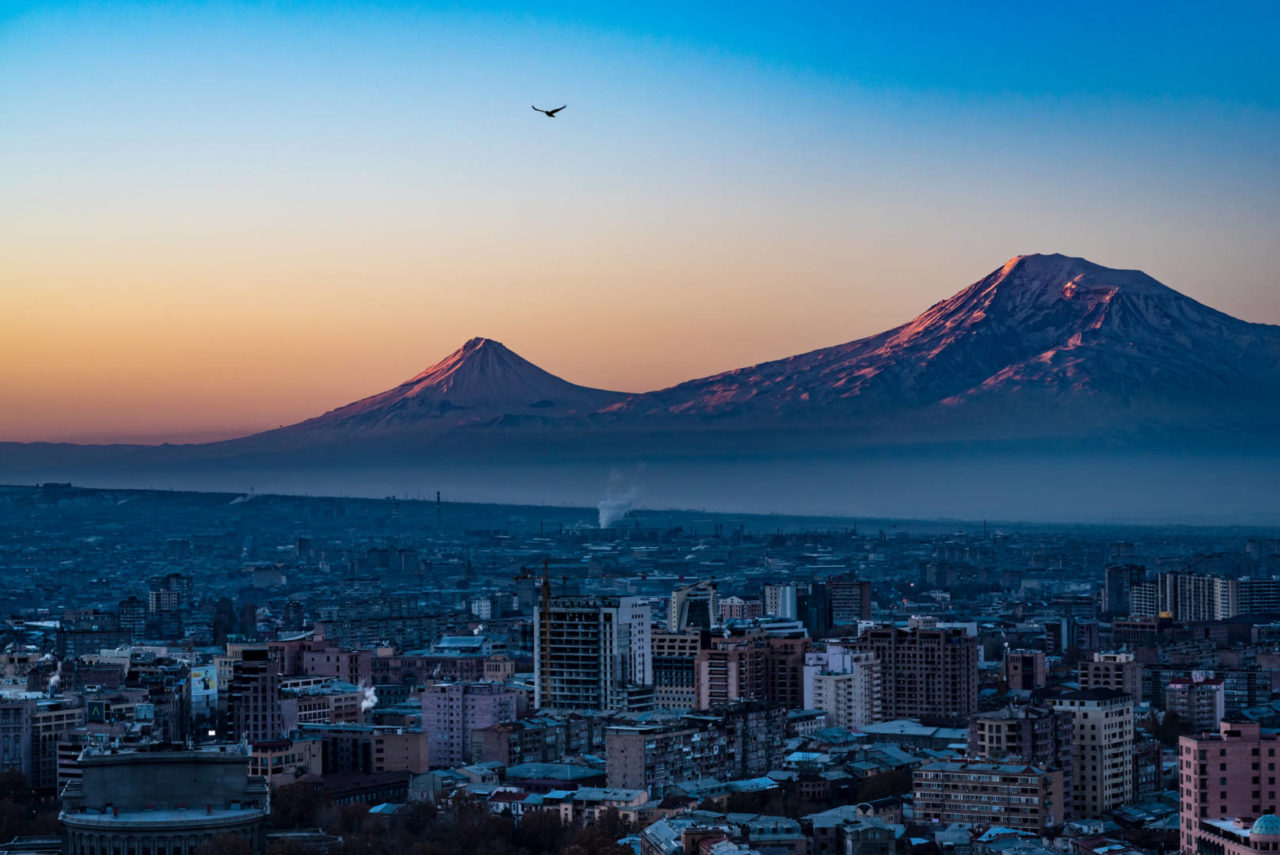 In the book of Genesis, when the ark rested on the mountains of Ararat, Noah sends out a bird to see if it would find dry land. When I saw this view of Mount Ararat, I wondered if this was the view Noah saw. I imagined receding floodwaters, instead of Yerevan’s factories and apartment buildings. I imagined a dove flying high, instead of a pigeon. And as the morning sun peaked over Armenia’s foothills, I saw the hope a new day brings. (©2017 World Vision/photo by Eugene Lee)