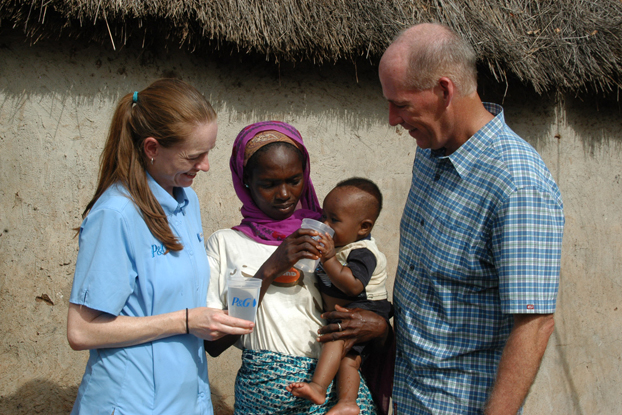 March 22 is World Water Day! Today, Dr. Greg Allgood, vice president for World Vision water, writes about the miracles he’s experienced along his journey with World Vision and P&G to provide 1 billion liters of clean drinking water. To mark this milestone, he announces new plans for the future of our work.

Do you believe in miracles? I do.

Earlier this month, we announced that Procter & Gamble (P&G) and World Vision have now provided 1 billion liters of clean drinking water together since we began our collaboration in 2007. We’ve worked together in 34 countries and have reached a breathtaking 6.5 million people with clean water.

We do this by providing people with P&G water purification packets. These are simple-to-use four-gram packets of powder that are added to dirty water to make it clean and healthy in just minutes. They work like a mini water treatment plant by using the same ingredients used in making water safe in the United States, but they can provide clean water for only 2 cents per person per day.

They are nothing short of a life-saving miracle for people who have to drink dirty water.

We’ve responded to emergencies, including the recent typhoon in the Philippines, the Haiti earthquake and cholera outbreak, the cholera outbreak in Zimbabwe, the earthquake in Chile, and floods in Mozambique. We’ve helped to keep children in school by reducing school absenteeism, and we’ve reduced the burden on women by giving them a tool to make water clean for their families.

One of the most miraculous experiences with the P&G packets occurred in the rural areas of coastal Kenya. The mother of one of the families, Zeinab, was very sick. She told me that she has AIDS. The power of clean water transformed her life by enabling her to get off her deathbed, become strong, and regain employment so she can provide for her family. Zeinab wants people to know that she is living strong and healthy even though she has AIDS because now she has clean water. She said it was good if I’d share the picture I took of her when she was so sick and after she regained her health.

Allison Tummon Kamphuis, my successor for the P&G Children’s Safe Drinking Water (CSDW) program, and I donated the 1 billionth liter of clean drinking water to Sakira Ahmed and her son, Failu, in rural Ghana. Sakira gathers her drinking water from a pond, and her family frequently suffered from worms and parasites before the P&G packets. She was grateful to receive the donation from P&G and World Vision and be included in the millions of people who have received clean water.

One of the most significant things that occurred before I retired from P&G and joined World Vision was to help begin a collaboration between P&G and Walmart. This partnership started in the UK with Walmart’s ASDA stores. During the campaign, every P&G product that is sold in ASDA triggers a donation to provide a person with one day of clean drinking water in the developing world.

And by every product, I mean a whole lot of different products, since P&G is the largest consumer products company in the world, with iconic brands like Pampers, Oral-B, Gillette, Venus, Always, Duracell, Pantene, Herbal Essences, Head & Shoulders, Olay, and many more. This effort has already generated tens of millions of days of clean drinking water, and the campaign that is running right now in the UK has a goal to donate 75 million days of clean water.

As one of the largest providers of the P&G packets, World Vision benefits from this P&G and Walmart campaign. In fact, partly because of this campaign, we’re announcing today not only the 1 billionth liter, but a new effort to reach another million people with clean water in West Africa during the next year. Sakira and Ahmed and many other people in seven West African countries will receive the P&G packets with support from this effort. We’ll provide 180 million more P&G packets this year in World Vision programs through one of the largest grants that P&G has provided for clean water.

Here’s a new short video to celebrate our 1 billion liter accomplishment and plans to do more:

Why is this collaboration so important? Scale. The potential for massive scale. The kind of scale that can help end the global clean drinking water crisis. This effort brings together P&G, the largest consumer products company on the planet, with Walmart, the largest retailer in the world, to support the work of CSDW implementing partners like World Vision, the NGO providing more clean drinking water than anyone else. World Vision is already reaching one new person with clean drinking water every 30 seconds. And it’s partnerships like this that will allow us to do even more and ultimately lead to solving the global water crisis.

Indeed, it will take a miracle and huge scale to solve the global water crisis.  But I know we’ll get it done. After all, it’s just one more miracle in this story.

You can join our efforts to solve the global water crisis! Help us fund a variety of water projects like the P&G purification packets by making a one-time donation to our clean water fund!