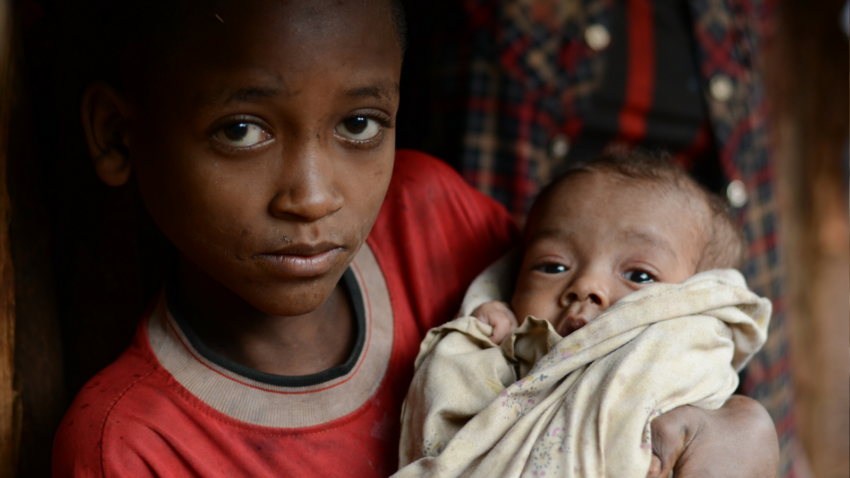 Joseph helps look after his baby brother instead of being in school, but he still hopes to go back. (©2017 World Vision/photo by Mark Nonkes)

11-year-old Joseph doesn’t know what to do when his baby brother cries. Maluken is severely malnourished, and Joseph had to leave school to help harvest coffee and look after his brother.

This International Coffee Day, read how World Vision is supporting families like Joseph’s who are affected by drought and hunger in Ethiopia, and learn how hunger hasn’t erased Joseph’s hopes of going back to school.

In two weeks, my 6-year-old nephew in Guelph will enter first grade. He already has his first day of school outfit picked out: a blue T-shirt and an orange pair of shorts. He’s got a new pencil case, a new lunch box, and a new pair of shoes.

The place my nephew was born in enables him to get excited about lessons of addition and reading, about lunch boxes with sandwiches and fruit, and playground games of tag.

In other corners of the world, children are not so lucky.

Two weeks ago, I met 11-year-old Joseph in the southwestern part of Ethiopia. Although he enrolled in first grade a few years ago, he never completed it.

Drought hit Joseph’s community, affecting his parents, who are coffee farmers. The coffee trees had just a few ripe coffee cherries when it was time to harvest. So the money the family normally earned from the sale of their coffee wasn’t enough to buy food. Instead, Joseph’s mother and father had to take construction jobs building mud walls in the nearby town.

When Joseph’s mom became pregnant, she wasn’t able to work in the final months of her pregnancy. Being the oldest child, Joseph was plucked from class and sent to work picking coffee for a few neighbors. He climbed trees, picking the little red cherries of coffee from sunrise to sunset. For his work, he earned 30 cents per day, money he gave to his parents to buy beans or flour so his family of five could eat.

Shortly after Joseph’s mom, Heirut, gave birth, she was able to go back to work as a farm laborer. Instead of picking coffee, Joseph was tasked with looking after his little brother while his mom was away.

“I play with him. I help my mom take care of him,” Joseph says.

But Joseph hasn’t been able to figure out what to do when baby Maluken cries. The baby gets too hungry during the day when his mom is away. He won’t stop crying, and there is little Joseph can do about it.

Maluken is 9 months old but only 7.5 pounds. He can’t yet sit up. A recent trip to the health clinic revealed that Maluken was far too small for his age — he was identified as severely malnourished. The health staff were worried he might die if he didn’t get immediate nutritious food.

Joseph had already lost a younger brother. His mom says the 1-year-old boy died due to diarrhea and vomiting.

When the health staff identified Maluken as malnourished, they quickly put him on an emergency nutrition program. Maluken was given packages of ready-to-use therapeutic food — a peanut butter paste that has rich proteins, minerals, and nutrients included in it to help children quickly gain weight and end the risk of death.

Baby Maluken smiles when he eats it. But his brother is still worried.

“I want him to be a healthy boy,” Joseph says.

Meanwhile, Joseph is hoping this year’s coffee harvest is better and that his family can finally afford enough food so he might be able to go back to school.

“I see them (his classmates) getting ready for school. They are learning but I’m not learning anything,” Joseph says.

The lack of rain in this part of Ethiopia, along with poor market prices for coffee, small land sizes, and the predominance of single cropping have led more than 500 children in this community to become severely malnourished. When the community doesn’t earn enough money from the coffee harvest, they don’t have enough to buy food for their children.

“If this continues, it cannot be good for the future,” says World Vision’s Getahun Mara, an emergency response nutrition officer.

World Vision is helping deliver food assistance to thousands of families who are in crisis. Our nurses are also partnering with local health workers to provide training to nutrition workers so malnourished children are given the best possible care and treatment.

To address the situation with long-term sustainability in mind, World Vision is also helping mothers with children under age 5 with gardening groups and savings clubs. This way, families are no longer relying on a single crop to provide for their needs and have enough money set aside during times when weather creates havoc.

Still, I find myself worried about the children I have met. I wish they too could be excited about the upcoming school year, lunch boxes full of food, and playing with friends, instead of worrying about how their younger siblings will survive.

Help support the future of a child like Joseph for the long-term — sponsor a child in Ethiopia today.

Make a one-time gift to support our emergency food response to the hunger crisis affecting more than 25 million people across East Africa.