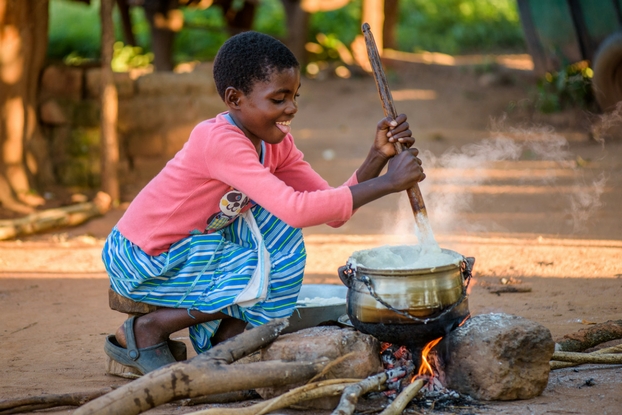 Cooking with your grandmother, sharing a meal with family — these are some of the special moments we look forward to during the Christmas season, or remember fondly from past holidays.

For 9-year-old Rosemary, the magic of cooking and eating together is a big part of her dream to become a chef!

When I was a little girl, the Christmas season meant a trip from our Midwest home to my grandmother’s house in North Carolina. That was such a special time for me. She always kept a jar of Hershey kisses in her kitchen, which she called silver bells. And best of all, she let me help her with holiday baking.

I would pull a chair up to the kitchen counter and watch the magic as she creamed the Crisco and sugar. Then she added the eggs. Sometimes she even let me crack one. And then there were the dry ingredients to be carefully measured, sifted, and poured into the sugar mixture.

She taught me that in making cakes, once the wet and dry ingredients were added together I needed to be very quiet to prevent the cake from falling. Or maybe she just used that as an excuse for a little peace and quiet. I was a very talkative child.

Cookies were my favorite though. I loved dropping dough by the teaspoon onto the cookie sheet. I might’ve snuck a few of those, though I’m sure I wasn’t as stealthy as I thought.

And then best of all, she let me lick the beaters and the bowl. I’m pretty sure that was my main motivation to help her bake!

One Christmas, I had the crazy idea to melt wax and pour the liquid into cookie cutters to create ornaments. My grandmother didn’t hesitate. She pulled old candles out of drawers and melted them down. And they weren’t even that bad as ornaments.

But to a child, having an adult who took my ideas seriously and believed in me — that meant the world to me. Her faith made me think that I could dream big.

This year, I got to witness that same special bond between a young Zambian girl, Rosemary, and her grandmother, Patricia.

Rosemary longs to be a chef. “I dream in my heart,” she says. Patricia fuels that dream by encouraging Rosemary to cook for her extended family.

Rosemary’s specialty is nshima — a corn porridge that’s a staple in Zambia. Watching the process reminded me of those holidays in my grandmother’s kitchen.

Patricia pulls the pot from the rack. It’s a special pot that fits 9-year-old Rosemary’s petite frame. Rosemary gets water from a tap near the family’s home and sets the filled pot on the wood fire.

Once the water boils, she adds finely ground corn flour and immediately begins stirring. That’s important to prevent any lumps from forming. Rosemary stirs while the porridge is still runny, but as it thickens, Patricia takes over with her work-strengthened hands. They sing together — their voices rising in harmony — filled with the joy of being together.

Then Patricia pulls out a little salt and adds it to the nshima.

This is significant because not so long ago, Patricia and her husband, Danford, couldn’t afford even this most basic staple.

They struggled to feed their family. Patricia and Danford both came from impoverished families, and their own followed the same path. Their grandchildren, like Rosemary, were destined to continue in poverty.

But life changed with a gift of five goats from World Vision’s Gift Catalog.

Before the goats, Danford and Patricia took any sort of work they could find to provide meager amounts of food. But it wasn’t enough.

Patricia also used to walk a couple of hours just to get clean water, which took her away from her children.

When Rosemary’s father, Justine, was a boy, he had to leave school. He couldn’t concentrate because of his hunger. But today, he sees more hope for Rosemary.

The goats came just in time for her.

They’re multiplying rapidly, so by the time Rosemary enters secondary school, there will be plenty of goats to sell to pay for her education.

World Vision’s child sponsorship came to Rosemary’s community not long after the goats. Because of sponsorship, her school has brand new latrines. Her family also got new mosquito nets, helping to reduce malaria.

And Rosemary won’t have to miss or be late for school because of getting water. Child sponsorship brought clean water to just steps away from her grandparents’ home!

All of this combined means she won’t have to give up on her dream.

And what’s her dream? She imagines herself working in a kitchen — preparing nshima for dozens and dozens of guests instead of only her family.

Rosemary is free to imagine this future because of the gift of goats, her sponsor, and her grandmother’s nourishment of that goal. Just like how my grandmother fed both my body and soul during those magical moments in her kitchen.

And after all, isn’t that a big part of the Christmas season — a child’s beautiful dreams?

Read the full story of Rosemary’s family here, and help a family like hers provide for their children’s needs! Give the gift of a goat today.