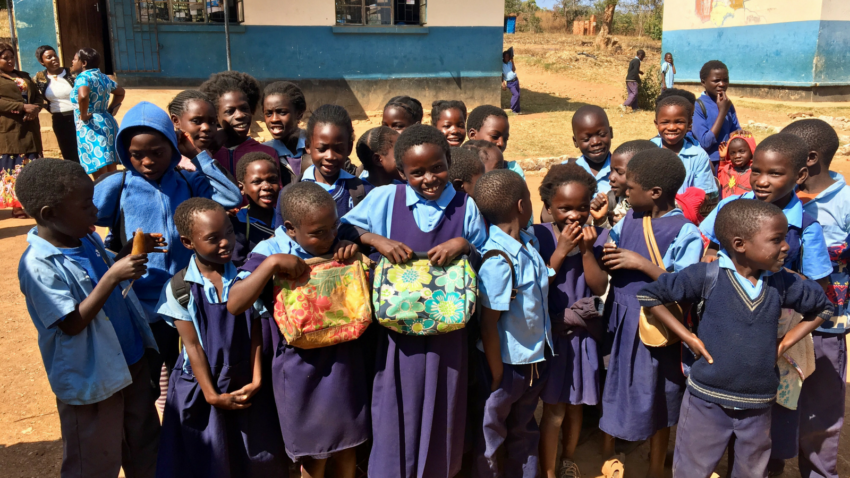 Irene and Nelia are proud to show off their treasured school bags. (©2017 World Vision/photo by Deborah Johns)

When you give to World Vision on Giving Tuesday, Thirty-One Gifts matches your contribution with a product donation (up to $1 million), which we use to help children and families around the world.

Our staff and bloggers have met some of the children for whom these donations made a big difference last year. Journey to Armenia and Zambia and meet them, too!

In late winter of 2015, I led a blogger trip to northern Armenia to meet families early in their partnership with World Vision as well as families who had benefited from child sponsorship for more than a decade. The contrast was stark, something we could easily see… and feel.

On our first morning in the city of Gyumri, it was seven degrees outside. Driving out to meet families who were just getting started with World Vision, we quickly entered a landscape that was unlike anything I’d ever seen before: barren, snow-covered hills as far as you could see. No trees. No other roads. Just the occasional thumbprint in the snow of a small village where people had shoveled a few paths around their homes.

One of the homes we visited belonged to the Ghazaryans. When we arrived, Ani told us that her husband Vartan was out collecting firewood. My only thought was about those white, barren hills and wondering where he would find any wood to keep them warm. Staying warm was a full-time job during the seven-month winter, and for many of the families we met, the fuel for their stoves was cow dung.

Having felt the cold in in the hamlet of Amasia is one of the reasons why I was so encouraged to receive an update about Ani’s family! The first photo I saw from our photographer’s return trip this year was this one of Ani wearing a sweatshirt from Thirty-One Gifts, our matching partner from the past three Giving Tuesdays, who will be matching up to $1 million in donations this year. Giving Tuesday and this corporate match have a direct, much-needed benefit to people the bloggers and I met on our trip.

All four of Ani’s children are sponsored now — two of them by blogger Anna Whiston-Donaldson and her sister! — and three recently received special gifts made by their sponsors to purchase what they need.

“It means a lot to me that my children are sponsored and receive gifts from someone who cares about what they eat and what they wear,” Ani says. “I know someone far away loves them, too.”

The family home is a shipping container that dates from the 1988 earthquake and has been added onto over time. The house is drafty and in poor repair, so it’s hard to keep it warm with one old stove.

Ani says she checks to see that Anahit and Vahan are dressed in their warmest clothes before they leave for school. “I zip and button the jackets. Then check for hat, gloves, and boots,” she says.

“Before I had warm gloves, my hands would get so cold on the way to school that I couldn’t write. It took a long time to warm them so I could do my work,” Anahit says.

Ani was also wearing a sweatshirt from Thirty-One Gifts, which had been donated to World Vision as part of their product match during last year’s Giving Tuesday.

In addition to Armenia, our partnership with Thirty-One Gifts has helped children all around the world over the past three years.

In July, a colleague of mine, Deborah Johns, visited Chipapa Primary School, which is in a remote village two hours outside of Lusaka, Zambia. On her visit, she noticed the cheerful faces of young girls carrying their school supplies in totes that had been donated by Thirty-One Gifts. In partnership with the Ministry of Education, World Vision uses these totes as a special incentive for young girls to stay in school.

In this community, girls dropping out of school is a life and death matter: Children born to a literate mother are 50% more likely to survive past the age of 5.

In this rural community, girls start dropping out of school around fifth grade due to reasons such as:

At the school, Deborah saw first-hand how this donation of totes from Thirty-One Gifts was encouraging girls to continue in their education.

Irene, 9, and Nelia, 8, received their “school bags” last year. “They were so proud to show them off!” Deborah wrote.  “I could tell the totes were treasured possessions and that they were thankful for the gift.”

Chipapa Primary School has four classrooms for 942 students (454 girls and 488 boys), ranging from first to ninth grade. World Vision is supporting the school with basic supplies, clean water, and a curriculum designed to increase health, literacy, and attendance.

Tuesday, Nov. 28 is Giving Tuesday! For the fourth consecutive year, Thirty-One Gifts and World Vision have partnered to double the impact made by donors’ Giving Tuesday gifts. Any gift given to World Vision on Tuesday will be matched with a product donation from Thirty-One Gifts up to $1 million, so any donation you make will have twice the benefit to families in need around the world.

The Thirty-One Gifts sweatshirt that Ani was wearing during the bitterly cold Armenian winter and the school bags that Irene and Nelia were so proud to show off to Deb were given to World Vision to match generous donations on Giving Tuesday last year!

You can choose any item to donate through World Vision to be part of the match, but if you want to make a direct donation to help keep children and families warm this winter, you can donate through our clothing for children fund, or to help girls stay in school, try our education for girls fund!

Addie Zierman: “The Inadequate Gifts That Change the World”

Benjamin Corey: “When Someone Far Away Loves You, Too”

Claire Diaz-Ortiz: “On Giving Tuesday, Give Girls an Education”