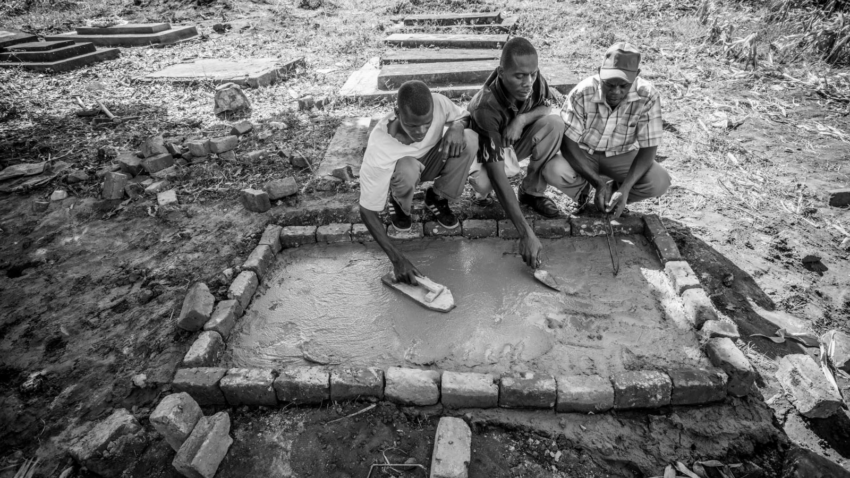 Family friends smooth over the concrete of 6-year-old Trevor's grave after his body was found yesterday. (©2016 World Vision/photo by Jon Warren)

Yesterday, 6-year-old Trevor’s body was found in Uganda. He had been sacrificed by a witch doctor. Our staff writer Kari is there in Uganda right now.

Pray with us for Trevor’s mother, and see how our Amber Alert program is working to bring children home when they’re abducted.

When my son, Nick was 6, he began taking a school bus to his babysitter’s house after school. Thinking of Nick walking a block down the hill to Barb’s house frightened me. Until then, he’d walked everywhere with his dad and me, usually holding our hands.

“Nick,” I told him sternly, “When you get off that bus, you cross the street and run to Barb’s house. Do not look right. Do not look left. Do not talk to anyone you see on the way. Just run.”

Those first few days Nick took the bus, I’d leave work and sneak up behind in my car just to make sure Nick followed directions. He did. He looked neither right nor left and ran like the dickens. My worries abated.

Those memories flooded back yesterday when I met 9-year-old David in Uganda. David and his family live in what’s referred to as the “heart of witchcraft” in Uganda.

Witchcraft is in plain sight here in Buikwe, a district east of the capital city, Kampala. Behind many homes are tin- or thatched-roofed huts. Inside are the tools of witchcraft — animal carcasses, shells from nearby Lake Victoria, and doves cooing softly, awaiting slaughter.

Like many in this lakeside community, David’s father, Paul, was a fisherman. His mother worked in gardens, often leaving her children home alone. Two years ago, David and his little sister, Sharon, were brushing their teeth under a coffee plant in the front yard. That’s when the strangers approached.

“Two men came here and started calling us,” says David. “I told Sharon to run. I ran.” He points down a path that leads to more homes. Sharon, a toddler, could not keep up. The men captured her, pressing chloroform to her face to silence her cries.

Child sacrifice is an abomination. Abductors are middlemen between people desperate — for money, to bear children, or to rid their bodies of disease. Witch doctors convince them that only a child’s body part, such as the head, the fingers, or the private parts, mixed with traditional medicine, will cure the problem. Ritual demands that the parts be removed while the child is still alive and conscious.

On the day we met David, we learned that 6-year-old Trevor was being buried in a nearby community. Trevor had gone missing the previous Friday. His body was found yesterday without his tongue or genitals. Trevor’s mom is a widow.

Abductors prey on vulnerable families, like Trevor’s, waiting until the child is alone to abduct them. Trevor was buried next to his father. As the grieving relatives departed, family friends leveled the cement over his small grave, encasing him in earth. Trevor was the second child in this area to be sacrificed this year.

World Vision’s Amber Alert-style program is taking on child sacrifice in Uganda. The program is ingenious in the way it has created a radical partnership between leaders of all faiths, law enforcement, local government, child protection committees, and traditional healers.

This diverse group has reached out with the message that stopping child sacrifice is everyone’s responsibility. Faith leaders have created a radio program that airs messages about child sacrifice, good parenting, and taking care of one’s neighbors. Betty Nandawula, a Catholic, and Umar Mukisa, a Muslim, co-host a live call-in program about family relationships, taking on topics such as domestic violence and parenting. The traditional healers have started their own radio program, trying to protect children and to ferret out the witch doctors who kill them.

When a child is abducted, the community is ready. Villagers are taught to intervene, and, if that doesn’t work, to sound the alarm. Seventy-three villages are equipped with drums that beat out a special rhythm and megaphones that carry the sound across the miles. Motorcycles block off exit routes and logs are laid across pathways to stop the abductors.

It works. Eight children have been saved this year from child sacrifice. When they were abducted, the community responded. Villagers began combing the green fields, searching for the children. The abductors, apparently frightened, dumped the children and fled.

That’s what happened to Sharon. When her brother, David, saw the men, he was afraid. He ran until he found a man with a cell phone. It was his neighbor, Chiwa.

“Chiwa knew what to do,” says Mary Nakibuka of the child protection committee. “He informed other members,” she says. “Another child protection committee member heard David screaming. He made a phone call to get the message on the megaphone. It said, ‘[Paul] Buka’s child has been abducted.’ Motorcycles blocked the highways. Because the megaphone was heard by the abductors, they dropped her.”

Sharon is safe. She’s 4 now. Family life has changed. Today the children go everywhere with their parents. Their father, Paul, no longer fishes but farms so that he can stay at home.

I asked David why he ran away from the men. He responded that his mother told him not to talk to strangers. I asked Mary later about David. “Why did he run? Do children know about child sacrifice?” She nodded. David knew exactly what could have happened.

The project continues to expand. Next, it will create or strengthen youth clubs, teaching children to protect themselves against child sacrifice. The project will work with parents to provide safe spaces for their children to go while they work.

Honest communication is critical to changing social norms. Traditional healers will be encouraged to talk about their skills and denounce fake healers, who prey on children. Faith leaders, both Christian and Muslim, will help lead the efforts to stop this criminal act. The Amber Alert system will spread — being replicated in more communities.

It is too late for Trevor, whose mother will grieve for her lifetime, but the work World Vision is doing in Uganda will save other children — girls like Sharon whose life was saved by her brother and a community that knew exactly what to do.

Child sponsorship is one of the most powerful ways to help protect vulnerable children and keep them safe from threats like violence and exploitation. By helping communities and families work together to meet children’s needs, we can make a significant contribution toward preventing child slavery, human trafficking, … and child sacrifice. Choose a child to sponsor in Uganda today.