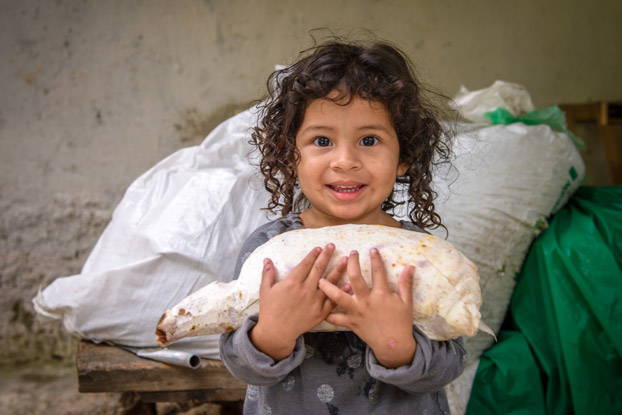 Madison is growing up well nourished because of the training her grandmother received. (©2016 World Vision/photo by Laura Reinhardt)

In rural Honduras, our Common Pot program learns from families whose children are thriving and teaches those lessons to other families to help them better cook for and nourish their children!

Meet a family that helped to bring World Vision to their community, and see the transformative difference that better nutrition makes.

I learned about healthy eating from my mother, who learned both from her mother and from a variety of health-food books she read during her health-food heyday.

Those books and cooking classes were readily available to my mom, but what if you’re a mother living in rural western Honduras and you have maybe a sixth-grade education?

Where do you learn? You also would learn from your mother, but what if the food you learned to cook is leaving your child malnourished?

That’s what happened to Iris when her son Henry was an infant. “I felt very sad when he was not growing. He was not eating and [he was] very, very skinny,” Iris says.

As any mother would, she worried. But she didn’t have to worry for long.

Thanks in part to the efforts of a man named Herman, World Vision had come to their community. Herman saw an advertisement about World Vision and said to himself, “My community needs World Vision.” So Herman “went after them,” he says. “I brought World Vision here.”

Herman also needed World Vision. His wife had died, leaving him to raise their six children on his own.

But things soon improved for Herman and his kids. World Vision did come into the community. And Herman remarried to a woman named Birgilia, who soon got training from World Vision in a program called Common Pot in Honduras — made possible because of World Vision’s child sponsorship program in the area.

In the Common Pot program, World Vision staff first work with local mothers whose children are thriving, and they determine how those mothers feed and care for their children. Using what they learn from the mothers of healthy children, they develop nutritional and cooking training for other parents.

The beauty of the program is that participants use plants they can easily grow in their own gardens. Right away, Birgilia began to see the results in the children. “The children started to gain weight. There was a big change after we used the recipes [from World Vision],” she says.

This training empowers mothers and fathers to take care of their family’s health. They’re not dependent on others.

Birgilia and the others who took the World Vision Common Pot training shared what they learned with other parents in the community — including Iris’ family. She learned to incorporate greens into the regular corn tortillas she made. They call these super tortillas!

She also learned to make juices, which included greens and citrus fruit juice, along with other healthy recipes. Henry and her other children loved this new food and, more importantly, began to improve.

Iris continues to use these recipes with her young twins. Her husband, Francisco, says that after eating the super tortillas, the children were more awake, more active, and had more energy.

Before the Common Pot classes, the family didn’t know about using greens in cooking. They mostly relied on corn.  And that’s why Henry failed to grow.

Herman’s son, young Herman, who now works for World Vision, remembers Henry before Iris made the super tortillas: “He had no expression. He had no smile.”

That’s changed radically. Now 8-year-old Henry is happy and healthy — and his smile lights up his face.

Change the life of a child in need and help keep him or her happy and healthy! Choose a child to sponsor in Honduras today.