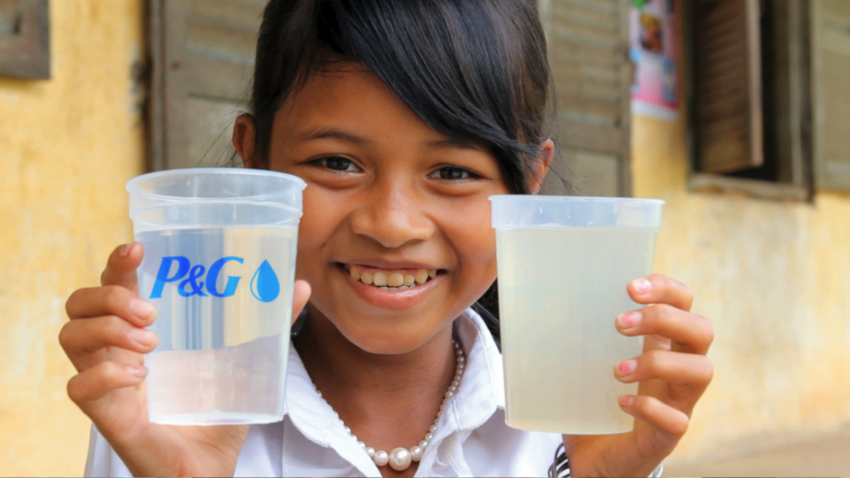 A girl in Cambodia shows the difference between clean and dirty water. (Photo courtesy of Procter & Gamble)

Today’s post comes to us from Dr. Greg Allgood, founder and director of the Children’s Safe Drinking Water program at Procter & Gamble.

The global water crisis is a silent killer that takes the lives of more children every year than HIV and malaria combined. More than 2,000 children die every day because of unclean water, poor hygiene, and lack of sanitation. But there is great hope. This is a crisis we know how to address.

At Procter & Gamble (P&G), we like to think we know a little bit about partnerships. There’s a case to be made that it’s in our DNA. James Gamble and William Procter started a partnership to make candles and soap on the banks of the Ohio River in Cincinnati 175 years ago.

That partnership has now grown into the largest consumer products company in the world, serving approximately 4.6 billion people with some of the most trusted brands in the world, including Pampers, Tide, Crest, Always, Gillette, and Vicks.

From a personal standpoint, my 26 years at P&G have been all about partnerships, the last decade as the founder and director of our not-for-profit humanitarian effort called the P&G Children’s Safe Drinking Water program. So I was thrilled when my friends at World Vision asked me to write a guest blog post on the occasion of World Water Day, March 22, whose theme this year is partnerships.

About 10 years ago, P&G developed a water purification packet technology that is amazing in its ability to take even heavily contaminated water and in a few minutes make it crystal clear and purified so it’s safe to drink for the entire family.

When we tried to provide these water packets through our existing P&G infrastructure, the cost of getting them to the people who needed them was too high, and the effort was losing a lot of money. We also weren’t able to reach the people in deep rural areas where the product was needed the most. This was where humanitarian groups like World Vision saved the day.

Early in our program, I visited rural Malawi, a landlocked country where nearly everyone is a subsistence farmer and, at the time, had one of the highest child death rates of any country in the world. I wanted to see for myself whether people in deep rural areas would accept the P&G packets.

I was hosted in Malawi by a humanitarian group that works alongside World Vision; when they learned that I wanted to go into deep rural areas where the most vulnerable people live, they called upon a former preacher and former World Vision staff member, Enoch Phiri, to guide me into some of the most remote areas of Malawi.

It was the dry season, so water was extremely scarce, and women were digging with their hands into a dried-up river to scoop out bowl after bowl of dirty and contaminated water. Enoch had never seen the demonstration of the product himself, so I showed everyone how to use it to make the water clear, and Enoch translated into the local language, Chechewa.

I’ll never forget his deep and calming voice as he translated for the small group of poor and proud farmers. It was a magical moment when the water turned crystal clear. As we enjoyed drinking purified water with the community, my questions about whether the community would accept this new product disappeared.

Not only did the people accept the new product, they prayed for us to provide them with more of these packets.

After my trip to Malawi and several similar experiences with World Vision in other countries, I began to understand the importance of partnering with humanitarian groups that invest the time to build deep trust with communities. I realized that the quick acceptance of our product was because of the trust that was developed over many years by World Vision staff like Enoch Phiri.

By working with humanitarian groups, we’ve scaled up from providing about 1 million packets a year to more than 100 million each year — or more than 1 billion liters of clean drinking water each year.

While P&G is focused on providing clean water through our partnership with World Vision, we’re participating in a much broader development effort. Having spent more than two decades in public health, I know that addressing the complex issue of poverty with a comprehensive, community-based approach like that of World Vision can sustainably improve lives.

A few years after my visit to Malawi, once the Children’s Safe Drinking Water program was established, I witnessed again the importance of the deep and trusted relationships developed by World Vision on the banks of a dirty river in Zimbabwe that was the only source of water for a community. This was during the devastating cholera outbreak that killed more than 3,000 people and made tens of thousands sick. Through a World Vision program, I met Admire Chiweshe, a nurse who worked around the clock for days, treating people who were suffering and dying from cholera.

It was an emotional trip to spend time with people who had suffered from cholera and with families who had lost loved ones to this plague. The people told us about the critical role that safe drinking water could play in preventing cholera, and my admiration for World Vision’s work and their community partners grew even deeper. Responding to cholera outbreaks, floods, drought, and other emergencies is an area where World Vision and P&G are now partnering to save a lot of lives. Most recently, we’re reaching millions impacted by the drought and food crisis in West Africa.

As the years progressed in our partnership with World Vision, we began working together in more countries and have now provided nearly 1 billion liters of clean drinking water together.

One of the most satisfying parts of our collaboration is the comprehensive approach that World Vision takes with development. Not only does World Vision use the P&G packets to provide clean water; they also help to address all the other major needs of the community and gradually work with the community so they can lift themselves out of poverty.

This almost always involves improving water, sanitation, and hygiene — because these are such a huge need — as well as improving education, empowering women and girls, expanding economic opportunities, improving agriculture practices so people have nutritious foods, and responding to the AIDS pandemic. 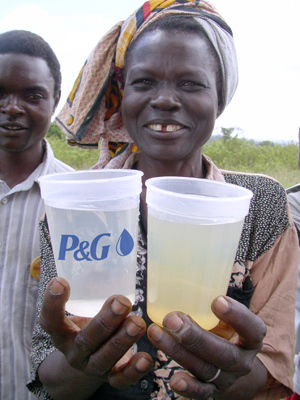 One memorable visit was in coastal Kenya, where I visited households that were receiving the P&G water purification packets for the first time. I vividly remember meeting a Zeinab, a woman suffering from AIDS who was literally on her deathbed. She was so thin and frail that we thought that she might pass away within a few days.

I was able to visit this same area six months later and happened to be at a clinic that World Vision helps support when Zeinab approached us.

I felt like I was meeting Lazarus. Not only was Zeinab alive, she was thriving. I’ll never forget her radiant smile. She wanted to thank us for saving her life.

Once she had clean water, she was able to regain her health and recover from persistent and severe diarrhea that parasites in her drinking water had caused. Once healthy, she was able to get a job, and her children were able to go back to school instead of spending their time taking care of her and the household.

Since our memorable visit with Zeinab, we’ve learned even more about the absolutely essential role of purified water in preventing opportunistic infections among people living with HIV. It’s literally a life-saver, and through programs in many countries, we’re now reaching millions of people with HIV and AIDS.

Finally, through discussions with Rich Stearns, the president of World Vision U.S., and his leadership team, we’ve agreed to an innovative approach for using the P&G water purification packets as a springboard to a more sustainable water solution.

World Vision has an impressive campaign to reach millions of people with sustainable water, sanitation, and hygiene in 10 African countries with the greatest needs. While more sustained water infrastructure is being built in cooperation with these communities, we’ll use the P&G packets as an interim solution to address their immediate needs for clean water. We believe that the investment by communities in the time and effort to use the packets will help prepare them for the ongoing investment needed to ensure sustainability of their water infrastructure.

At P&G, we have an audacious goal to save one life every hour in the developing world by 2020 by providing 2 billion liters of clean drinking water every year with the P&G packets. Our partnership with World Vision is mission-critical to this success. And it gives me great pride to know that our focused goal at P&G will be part of an even bigger effort by World Vision to provide sustainable water at scale for millions of people.

Contribute to World Vision’s clean water fund today! Your gift will help save children from the suffering caused by parasites, worms, dysentery, and diarrhea. Plus, they’ll be able to attend school, because they won’t have to spend their days sick in bed or walking long distances to collect water that may not even be safe to consume.