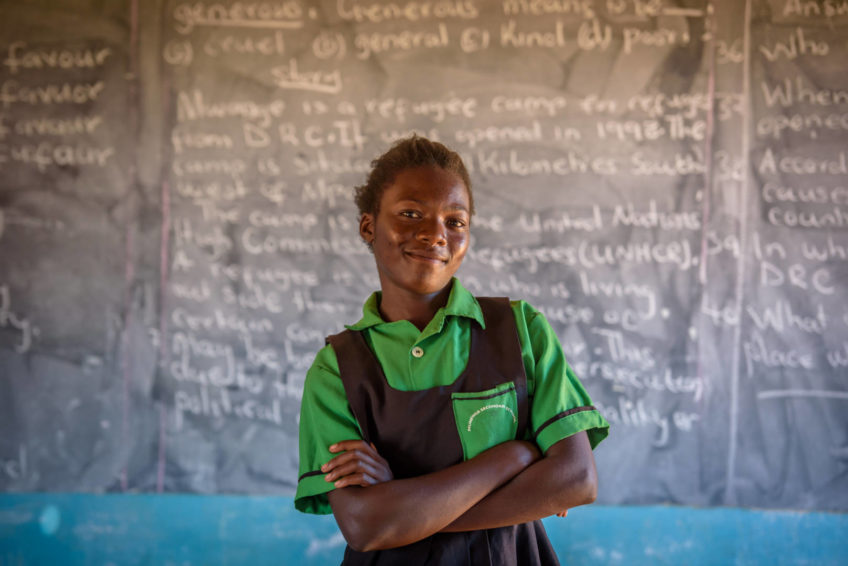 Felistus, 15, stands in a classroom in her school in rural Zambia. Though she was lured into child marriage at age 14, the local child protection committee brought her back and encouraged her to return to school. (©2019 World Vision/photo by Laura Reinhardt) 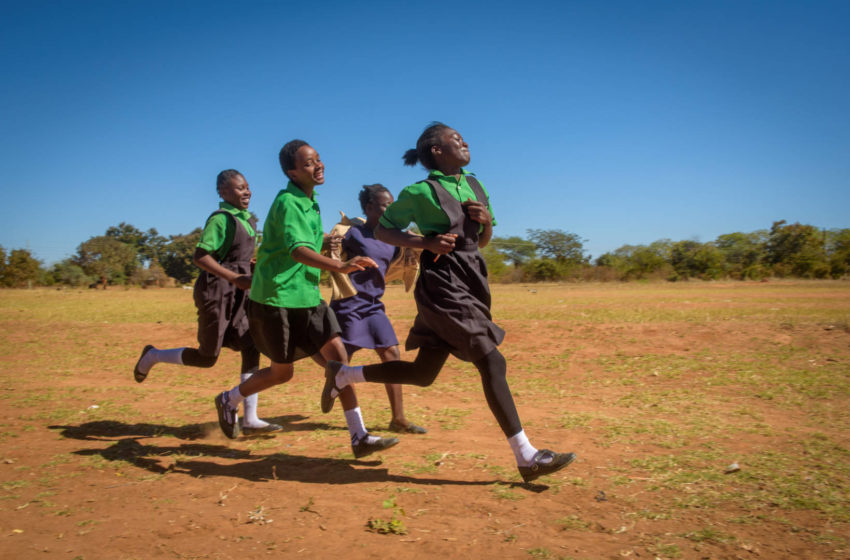 Felistus leads the pack of girls practicing for a track meet. She’s a dedicated athlete who loves to compete. (©2019 World Vision/photo by Laura Reinhardt)

Felistus sits outside her aunt’s home with her grandmother, Monica; grandfather, Siongeso; and aunt, Evelina Mainza, 55 (at left). (©2019 World Vision/photo by Laura Reinhardt)

Felistus, 15, is a strong, competitive runner, a confident student who excels at math, and an aspiring nurse. She makes her family, church, school, and community proud.

When she was 14, Felistus stumbled and nearly lost her way. While visiting a friend, a boy she barely knew talked her into eloping. “I thought with him life would be good,” she says. “He promised he would provide clothes, food — everything — for me. And I thought, ‘I can take care of him.’” He took her with him to a camp in the bush.

Felistus’ child marriage is not unique. More than one quarter of women in Zambia were married as children. Sometimes parents, grandparents, and community leaders pressure girls to marry early.

“It happens often because they don’t feel loved and supported at home,” says Alice Namuyamba, a World Vision project manager in Zambia. “Instead, they look to a man to love and support them.” Schoolgirls envy their married peers who get lots of attention as well as gifts, new clothes, and soon, babies.

Many more girls than boys drop out of school starting in upper primary grades. Child marriage, pregnancy, and financial constraints are the most often cited reasons for leaving school.

Felistus quickly realized her mistake. “I like school very much, so I was sad. I insisted I wanted to go back home. I didn’t want to be married, but what could I do?” she says.

Though Felistus didn’t know, people in her community were looking for her, praying, and working together to bring her home.

Mapenzi Mweemba, 45, is a member of the Seventh Day Adventist church that Felistus attends with the elderly grandparents who have cared for her since she was a baby. When Mapenzi and the rest of the church’s 12-member Action Group, a child protection committee, heard Felistus was missing, they knew what to do.

“We were trained on child protection by World Vision, including how to end child marriage,” Mapenzi says. They wasted no time — contacted Felistus’ friends, found out the boy’s name, and where the couple had gone. They went to see Felistus’ grandparents and the 16-year-old boy’s parents, too.

“Parents are driving child marriage sometimes because of poverty and hunger,” Alice says. “They (a girl’s parents) want a dowry, and they don’t support the girl’s education.” They want to reduce their expenses and see that the girl is in someone else’s care.

That was not the case with Felistus’ family. Her grandparents only knew she hadn’t come home, and they were worried. The boy’s parents also said they knew nothing about what had happened.

With the child protection committee taking the lead, Felistus was quickly found.

“We took her for a medical exam and pregnancy test, and she was fine. We don’t want more girls to die or get diseases,” says Mapenzi on behalf of the child protection committee.

The committee faces a challenge trying to educate parents who want to marry girls off, she says. They are also helping to keep girls and boys in school when there is an unplanned pregnancy.

Now it’s the committee’s job to monitor Felistus’ situation, Mapenzi says, but not the committee alone. Teachers, social workers, the police department’s victim support unit, local government leaders, and other community members are all working together to intervene in cases of child marriage, gender-based violence, or rape.

Returning to school with new resolve

“When they came to get me, I realized how much people care for me and love me,” says Felistus, smiling through tears. “A lot of people encourage me to go to school now. It gives me courage. If I’m educated, I can help my family. I want to achieve because these people see me as a champion.”

She has proven herself a champion runner, coming in first among 13- to 17-year-old girls in her school in the 100 meters. She competes in other track events, plays football (soccer), and is practicing for a regional track meet.

Felistus still struggles to afford a secondary education. During the rainy season, she works with her grandmother, Monica Mutinta, 82, weeding on neighboring farms. Monica has a bad leg and finds it hard to get up and down in the fields. Felistus’ grandfather, Siongeso Simasiku, who everyone says is “about 100” years old, is nearly blind and unable to work.

The World Vision education program that has so far paid Felistus’ school expenses is ending, Alice says. However, Felistus picks and sells wild fruits for money that she contributes to a youth savings group, so she can take a loan when she needs things for school. In World Vision’s Youth Ready program, she’s learning how to manage money and plan for the future she hopes to achieve in life and work.

“I look at the female teachers and nurses [I admire] and think, ‘They were once girls like me,’” she says. “I see that they treat everyone kindly, with care and love. I want to be like that.”

The love Felistus has received inspires her to use her story to help other girls. She tells a friend who said she envies girls who are married to “be strong, be educated, and take responsibility for yourself.”