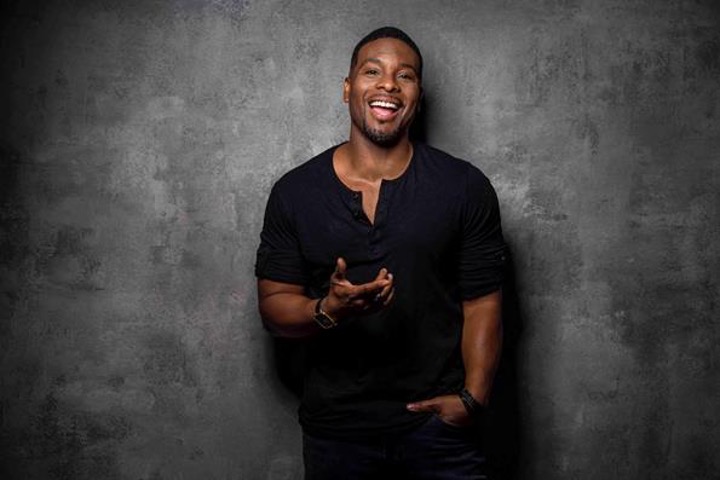 Kel Mitchell, best known for his roles in Good Burger and on Kenan & Kel, is excited for the World Vision Global 6K for Water. (Photo courtesy of Kel Mitchell)

Shortly after the April 3, 2021, episode of Saturday Night Live began airing, Kel Mitchell’s phone started blowing up. Texts and calls poured in asking if he had seen the opening monologue and heard what the host, Golden Globe–award winning actor Daniel Kaluuya, had said about him.

Kel — a father, actor, producer, and even youth pastor — has a deep acting resume that even includes finishing as runner-up in Dancing With the Stars in 2019. But he’s best known for his roles in the film Good Burger and on Nickelodeon’s television shows, All That and Kenan & Kel — the show Daniel watched as a 9-year-old that inspired him to write a play. That play was performed at a real theater, which led Daniel down his career path to where the now-32-year-old is winning Golden Globes and hosting the popular sketch comedy show this particular Saturday evening. Filled with gratitude and live on national television, he thanked Kel at the end of his monologue for inspiring him.

“I thought it was awesome because you never know who you inspired, and him being so young and watching Kenan & Kel, and then look who he has become!” Kel says. “[It’s] just awesome. I’m a fan of his work, and to know that my work actually inspired him to get into acting is just a beautiful thing.”

Inspiring and helping others is what drives Kel, and it’s also why he decided to partner with World Vision.

“That’s what it’s all about — spreading love and doing things that are positive,” Kel says. “That’s why I love World Vision. You never know who you’re helping. One of these kids that we helped could be the next Daniel Kaluuya, you know what I mean?”

Kel can most recently be seen on MTV’s show Deliciousness. World Vision sat down to talk to him about the show, his faith, and why he’s partnering with World Vision.

Congrats on a second season of Deliciousness. You make so many great shows that the whole family can watch together, and that’s not always very common. Why is that?

Yeah, I’ve been blessed to have good projects that are geared toward family and which are fun — but then also able to spread my wings and play different characters. But that’s always my big thing. My team knows that I love doing roles that put a smile on people’s faces or teach them some type of positive lesson through it all. Even if it’s a drama, I want to make sure that there’s a message that’s behind it that’s positive. If that character has an arc, and he’s changed at the end of it, I think that’s awesome. Those are always the best type of movies and shows.

With Deliciousness, I’m just loving it. I’m having fun. It’s food fails, and we get to laugh at these food fails that are relatable, you know what I mean? We’ve all messed up a recipe or dropped a plate of food that we’re bringing out for everybody. So it’s just as awesome in season two. And we got nominated for an MTV Award, so I’m super excited about that.

I’m sure you get this question a lot, but you’re an actor, producer, and you’re also a youth pastor, which not everyone knows. Is it hard to be a Christian in Hollywood?

You know, here’s the thing. I understand that I got blessed with the jobs that I’m getting because of the Lord — the endurance that He’s given me and the talent He’s given me. So for me, I want to let other people know that, you know what I mean? And that’s my main thing: letting them know how I got here and my journey because there’s a lot of ups and downs within any business, but especially within Hollywood.

In those low times, who was there for me? God was there for me. When you’re doing work like this, people always ask you, “What are some keys you can give me? What are some things that I can do to better my career?” At the core, and the first thing I let them know about, is my faith — faith, hope, and love. You’ve got to have all those things because that’ll keep you getting up every day. That way, you spread that love, and you don’t get so caught up with all the crazy mechanics that happen within the entertainment business.

Yeah, I was looking at your YouTube channel. You’ve uploaded a bunch of your sermons. It’s great to have powerful messages that youth can also absorb easily. How do you stay so positive?

I just did a sermon called “On Going,” about how when we pray, it doesn’t have to always be like, “Okay, I have to be in church, and I got to pray, and it has to be the right moment.” When we’re praying, it’s an ongoing conversation with God — every moment, every minute. Even before I do these interviews, I’m praying. I’m asking God to speak through me. He’s our friend. He’s with us all the time. So for me, that is what really helps me, especially the Holy Spirit comforting us.

You know, after Jesus died on the cross and rose again, He came back and He went to His disciples and literally said, “I’m leaving you with the Holy Spirit to comfort you while you’re here.” That’s really bringing heaven on earth — salvation, starting now while we’re here. That’s what’s so beautiful about it. That’s what gives me my joy and gives me my peace when I tap into that. Without Him, it would be my own will, and I would be stressed out like, “Oh, I got this to do! I’ve got this to do! And all of this stuff is going on!” But He helps me have that joy through it all and just remain happy.

I love seeing you put your faith into action. Do you have a life verse that helps guide you?

Oh, yeah, definitely. “I can do all things through Christ who strengthens me” (Philippians 4:13). That is a big one. And then, this isn’t a verse, but this is a quote: “Spread love like confetti.” So my main thing is spreading God’s love like confetti.

I was on “Dancing With the Stars,” and it’s crazy because they love confetti cannons. They loved it. At the end of every day it was like, “Boom!” and confetti would fly. You would go home and find this confetti in your fingers, and your armpits, and all over the place.

And that spreading love is what you’re doing with World Vision and the Global 6K for Water, too. What is it that you love about World Vision?

I love World Vision because their passion is the same as mine — helping others all around the world, helping youth around the world. You know, me being a part of a kid network for so many years, I have a love of helping families, and that’s what they’re all about as well — helping families who are in need. That’s why I want to make sure that I team up with World Vision and organizations like that.

Now there are 10Ks and there are 5K fun-runs, but why is the Global 6K for Water a 6-kilometer race?

6 kilometers is like 3.7 miles. The thing about it that people might not know is that in these different countries, kids are literally walking that long to go get water. This water can be as heavy as a microwave. So imagine holding this much water and walking that long — when they could be doing other things. It’s pretty crazy.

So World Vision is helping them get clean water so they don’t have to do that. The 6K on May 22 is about saying, “Hey, we love you, we know you had to do this, but now you don’t have to do it anymore.” When you register at World Vision’s website, it’s so awesome because your money is going to actually be able to help build wells and create water stations so kids can have clean water. It’s going to be awesome.

We’re all going to join together and do this, and it also teaches our kids how to help others and also be healthy at the same time. I love to work out anyway, and I love running anyway, so I think this is going to be an awesome way that I can run and also help someone around the world. It’s going to be cool!