Eight-year-old Esther, far left, and her siblings draw water from a filthy pond that is polluted. “We are scared to drink the water,” says Esther's sister, Irene, 9. “We know there are worms in it.” The snakes scare her, too. “You can see them swimming in the water,” she says. The family is among 6 million Rwandans who lack access to safe water. (©2018 World Vision/photo by Jon Warren)

Esther bends down to get water. The pond is so dirty that Esther and her sisters get scabies from washing in it, and they can never truly be clean. They won’t change clothes after collecting water either if there are no clean clothes to wear. (©2018 World Vision/photo by Jon Warren) 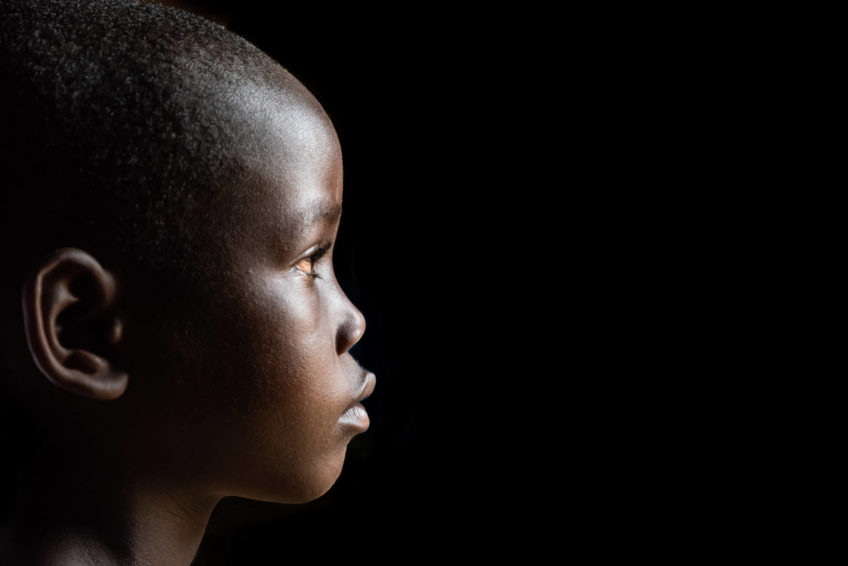 Esther has suffered the most physical discomfort due to the filthy pond. She was bitten by a bloodsucking parasite that attached itself to her ankle as she collected water one day. “It was very painful,” she says. (©2018 World Vision/photo by Jon Warren) 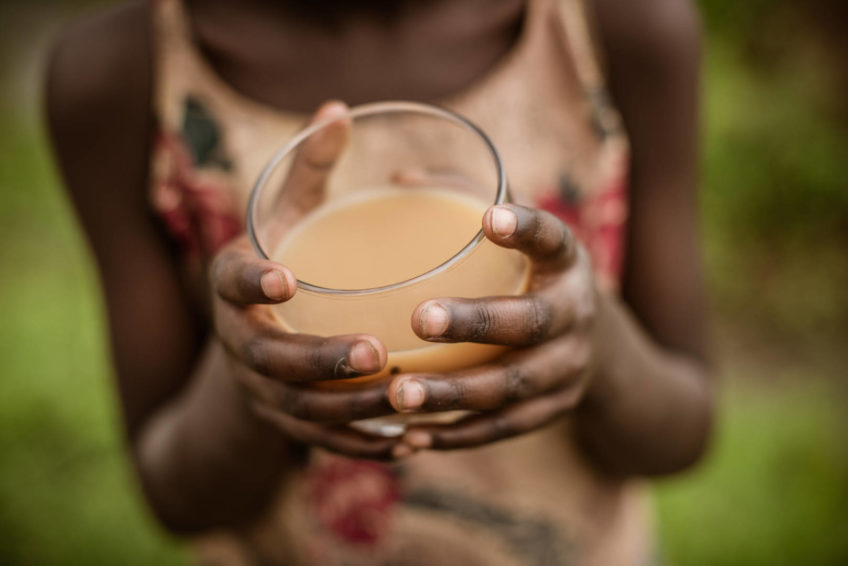 Esther holds a glass of dirty water collected from the pond. She hates the pond and is reminded daily of her distaste for it — the dirty swamp is her family’s only source of water. (©2018 World Vision/photo by Jon Warren)

Alongside a muddy pond in Rwanda lives a family with six daughters. They differ in size, height, and personality, but they agree on one thing: They hate the pond. It is dirt-brown, bug-infested, and disgusting. “The water stinks because of the cow dung,” says 8-year-old Esther Gisubizo. It tastes bad, too. “It’s bitter,” she says. But there’s no way around it. The pond is the family’s only source of water.

Several times a day, Esther and her five sisters, ages 6 to 17, trek to the pond to collect water. They live in Gatsibo district, a two-hour drive northeast of Kigali, Rwanda’s capital. Their parents, Augustin Hakizimana, 45, and Olive Nirere, 38, moved back to the district after the genocide — Olive from refuge in Tanzania and Augustin from the Democratic Republic of the Congo where, as a soldier, he’d lost a finger and suffered a serious bullet wound to the leg.

The pond is a busy place. “People come from far away on their bicycles,” says Augustin. Thousands of people from seven nearby villages trek down the path carrying yellow jerrycans to fill, competing with herds of cattle who are drinking and defecating in the pond. “It’s stagnant water,” says Augustin. “Feces are in it. When you drink, you know what’s in it.”

The cattle lift their shiny black heads at the sound of the mobile water tanks that come to the pond to pump water for use in mixing cement for road and other construction. The advent of electricity in some parts of the district has brought opportunity, creating even more competition for water al-ready in short supply.

A wave of fear

“Sometimes we go in the dark in the morning,” says Esther’s 11-year-old sister, Sandrine. The sisters hold hands, giving each other courage to make the trek, the first of six each day. “I get scared because most times, there are snakes there and parasites,” says Esther. “Most times I’ve gone to fetch water, the parasites come and eat me [on my legs].”

Of all the sisters, Esther has suffered the greatest physical distress after a bloodsucking parasite attached itself to her ankle.

“It was very painful,” she says. Patient Munezero, the supervisor of the nearby Bihinga Health Center, says the parasite often bites between the toes or the sole of the foot. “If you don’t pull it off,” he explains, “it keeps burrowing to find blood. The only solution then is surgery.”

Esther’s father says, “She’s usually the funniest and most vigorous of my daughters.” But Esther has malaria, and her skin itches. She’s lethargic. The pond is so dirty that the girls get scabies from washing in it, and they can never truly get clean.

Olive shakes her head at the wretchedness. She too is suffering from malaria, her face shiny and countenance weary. “Do we have any choice?” she asks. “What we do is out of desperation.”

Desperation leads to unwise choices, including venturing out too deep to gather water. Seeing bugs skim the surface, zipping their way around the floating muck, many believe that the water is cleaner farther from the shore. As two boys wade out farther, an older woman yells, “Please come back! You may drown.”

Everyone knows she’s thinking of Julius.

Julius Tugume was a star. “He was handsome and energetic,” says his aunt, Francisca Mukandamutsa. Francisca, a seamstress, adopted Julius when he was 6. His father had died as a result of HIV, and his mother, Francisca’s sister, was unable to care for him. “I took him in to give him a chance,” says Francisca. She brought him home after his father’s funeral, and the little boy thrived.

“His marks were above distinction,” remembers Edward Sakure Ndahiro, the headmaster of Bihinga School, where Julius attended. “He was a genius.” The 17-year-old had just taken the national exams, scoring 82% — a mark so high that when the headmaster reveals it, you can hear the sharp, surprised intake of his listeners’ breath.

Julius never knew his score. The test results came back after he drowned in the pond. His best friend, Desire Zigirinshuti, 17, was there when it happened. On that day in November 2017, when the boys went to the pond to collect water, Julius went out too far, dropping into one of the pond’s deep holes. “We didn’t swim, so we couldn’t save him,” says Desire.

Francisca learned late on that terrible afternoon that Julius had drowned. She was devastated, as were his friends. “On his burial date,” she says, “those kids cried until their last breath.” His headmaster, Edward, still grieves. “The family lost a good boy; the school lost; the country lost,” he says.

The community lost, too — a sense of security replaced by fear. Now, Olive worries for her daughters who collect water while she works. She knows she could lose them. “Whenever I remember Julius, that is what comes in my mind,” she says.

Esther will never forget that terrible day and tries to protect others from what happened to Julius. “I always tell them, ‘Please, if you go beyond that point, you’re going to drown.’”

A deluge of maladies

Julius’s death is a distressing example of the suffering inflicted on Rwandans by dirty water. At Bihinga Health Center, Patient Munezero, 33, presides over a waiting room that’s packed on this rainy day with women and children bundled against the weather.

The center serves 42,000 people, and Patient says it is always busy. Dirty water is to blame: 70% of the patients have water-related illnesses. It’s no surprise given what’s in the water. “When the cows are going for drinking, they leave cow dung there,” says Esther. “It’s so disgusting to think you can drink this water.”

Not drinking water is, of course, dangerous and deadly. “When people don’t have enough water for drinking, they can become dehydrated,” explains Patient. “That can even cause death.” But drinking contaminated water leads to disease. “People get sick with diarrhea, digestive disorders, typhoid, [and] intestinal worms,” he says.

It’s ingesting the water, over and over, that keeps children from advancing. “When I drink that dirty water,” says Esther, “I get sick to my stomach. I vomit. I feel a lot of pain, and I dehydrate very often.”

When that happens, she misses school. Esther was sick so much last year that she was moved back. Now she’s in first grade. Again.

A surge of hope

Nearly 6 million of Rwanda’s 11 million people don’t have access to safe water. That’s why World Vision is thinking big and working with the government to bring clean water to all of Rwanda’s people — including children like Esther — by 2024.

This ambitious goal is attainable. First, because of the size. Rwanda is densely populated, but small. One can drive around the country in just a day, making it easier to oversee projects and monitor progress.

Second: scale. As the world’s leading nongovernmental provider of clean water, World Vision has the trust and support of the Rwandan government.

And third: sustainability. World Vision helps communities establish committees that advocate for water issues and handle operation and maintenance of water systems, so water keeps flowing. Progress has moved quickly since 2012 when World Vision started water, sanitation, and hygiene work in Rwanda, installing pipelines to serve thousands of people at a time. Already, over 300,000 more Rwandans have clean water and access to improved sanitation. Another 130,000 have installed hand-washing facilities and improved latrines as a result of World Vision’s behavior change campaigns.

World Vision has champions among the highest level of government officials who are eager to achieve success on behalf of children like Esther. “Your goals are our goals,” says Prime Minister Edouard Ngirente. “We are working together in a good manner.”

Julius’s aunt, Francisca, echoes Esther’s prayers for clean water. “We lost Julius, but if World Vision would do something so that another child like Julius would not die, I will praise God for that,” says Francisca.

While it’s too late for Julius, it’s not too late for Esther and her sisters. And now, their need for clean water is even more pressing. Augustin and Olive recently separated after years of strife, leaving Olive to care for the girls on her own. An already challenging life just became even more difficult for the mother and her six daughters, who are fighting for survival in a house by a dirty pond in Rwanda.