More than eight weeks into the conflict in Ukraine, over 5 million children and adults have fled to neighboring countries in a crisis that continues to intensify, with casualties and displacement growing. In addition to millions of refugees, 7.1 million people are believed to have been displaced within the besieged country, meaning that nearly one of every four Ukrainians have been forced from their homes.

The Office of the High Commissioner for Human Rights (OHCHR) reported 4,966 civilian casualties between February 24 and April 18, 2022 — with 2,104 people killed, including 205 children — mostly resulting from explosive weapons in populated areas.

The overwhelming majority of refugees and displaced individuals are children and women. The U.N. has said that another Ukrainian child is becoming a refugee nearly every second, and that more than one of every two Ukrainian children are now displaced.

Most refugees have fled to Poland, Romania, Moldova, Hungary, Slovakia, and the Czech Republic, where they have been widely welcomed by governments and local communities.

As war continues, humanitarian needs are multiplying. World Vision staff are supporting refugees in Romania, where we aim to provide hundreds of thousands of people with essential aid, including emergency food assistance packages and educational and psychological support. We’re also working with partners to support refugees in Moldova and displaced families in Ukraine, and through our staff in Georgia, where thousands of visiting Ukrainians were stranded when the conflict began.

FAQs: What you need to know about Ukraine’s humanitarian crisis

Explore facts and frequently asked questions about the humanitarian crisis in Ukraine and learn how to  help children and their families.

Fast facts: Where is Ukraine and what’s the history of this conflict?

What’s the potential impact of the current crisis in Ukraine?

With over 5 million fleeing Ukraine in the space of eight weeks, this is the fastest-growing refugee crisis in Europe since World War II, according to the U.N. High Commissioner for Refugees.

The sudden escalation of conflict is not only devastating the lives of Ukrainian children and families but is expected to create economic disruptions that impact child poverty far beyond Eastern Europe. This conflict not only threatens regional stability but is also expected to raise humanitarian needs sharply.

U.N. agencies anticipate a dramatic increase in global hunger, which was already on the rise, as conflict has shut off critical food exports from Ukraine.

What food supplies will be affected by the Ukraine crisis?

In 2021, Ukraine ranked among the top three global exporters of wheat, corn, rapeseed (used to make canola oil), sunflower seeds, and sunflower oil. With Russia being the world’s largest exporter of wheat, the two countries together provide about one-third of the global supply of cereal grains.

“The conflict in Ukraine has resulted in a spike in the global price of wheat, up to its highest level since 2008, when the world had its last severe global food price crisis. This is due to the fact that Russia and Ukraine export 29% – almost one third – of the world’s wheat,” said Amanda Rives, World Vision’s global senior director for disaster management resource development. “Wheat is an essential product, provided to those experiencing, or at risk of, starvation.”

The Ukraine–Russia area alone provides more than half of the wheat supply distributed by the World Food Programme (WFP), according to the U.N. World Vision is WFP’s largest implementing partner worldwide.

“Food, fuel, and fertilizer prices are skyrocketing. Supply chains are being disrupted. And the costs and delays of transportation of imported goods — when available — are at record levels,” Secretary-General of the United Nations António Guterres said. About 45 less developed nations import a large percentage of their wheat from the Ukraine–Russia region. “All of this is hitting the poorest the hardest and planting the seeds for political instability and unrest around the globe,” he added.

International food prices also may rise by up to 22% above their already elevated levels because of the crisis, according to the U.N. Food and Agriculture Organization (FAO). Between 20% and 30% of winter cereals, corn, and sunflower seeds in Ukraine will either not be planted or not be harvested during the 2022-2023 season, the FAO anticipates. This is expected to contribute to global supply gaps and heighten economic hardships and needs for vulnerable nations globally.

Simulations from the FAO suggest that should the reduction of food exports from Ukraine be prolonged, the global number of undernourished people could increase by 8 to 13 million people in 2022 and 2023, with the greatest impact being in the Asia-Pacific region and sub-Saharan Africa, followed by the Near East and North Africa. 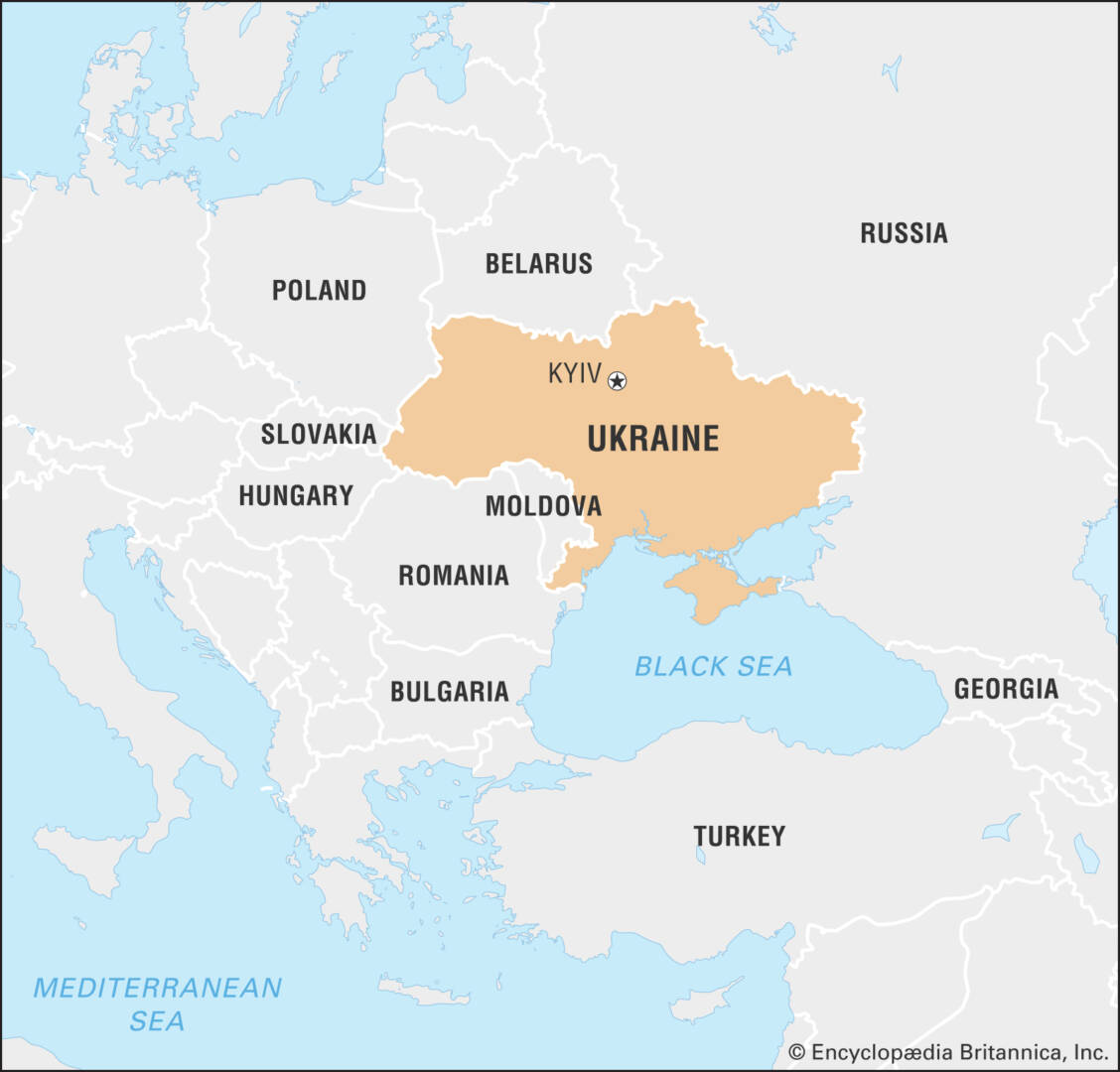 We’ve been responding since the first week of the crisis and are continuing to scale our response across the region, with the goal of reaching nearly 300,000 people in Romania, Ukraine, Moldova, and Georgia over the next few months.

World Vision has worked in Eastern Europe for years, which positions us well to support those affected by this crisis. Last year we assisted 3.2 million people across the Middle East and Eastern Europe through emergency response programs.

How many children are affected by the conflict in Ukraine?

Children make up half of all refugees from Ukraine. The United Nations Children’s Fund (UNICEF) reports some 2 million children have fled the country, with another 2.5 million displaced within Ukraine. More than 1.1 million children have arrived in Poland, with hundreds of thousands also entering Romania, Moldova, Hungary, Slovakia, and the Czech Republic.

“We know that children have been killed, we know that thousands and thousands are at risk, and we know that more children, gutwrenchingly, are going to die or be injured in this unless fighting ends,” said James Elder, spokesperson for UNICEF.

At least 205 children’s deaths have been documented during the conflict, along with injuries to an additional 362 children, according to OHCHR.

How are children being impacted by the Ukraine crisis?

Ukraine’s 7.5 million children have been put at grave risk. The conflict is forcing them into situations of extreme vulnerability and leading to mental and emotional stress, the loss of loved ones, interruption in education, and the destruction of homes and family livelihoods.

“Currently, almost one child every second is being forced to flee their home in Ukraine and seek refuge in neighboring countries,” said Mihaela Nabăr, national director of World Vision’s Romania office. “Some of these children have been on the move for days in freezing temperatures, going from one temporary accommodation to another. Many were forced to [leave] their clothes and toys, and maybe even pets behind. Their lives have changed in an instant, and for children, who need routine and familiarity, this has been deeply distressing.”

She said many of the children arriving in Romania shared their heartbreaking experiences after having witnessed fighting — or worse — and had seen their homes and communities damaged or destroyed.

“Many of these children lost everything they knew when the conflict began,” she said. “What we hope to do is to help them to start dealing with the trauma of war and the stress of being uprooted from their homes, communities, friends, and schools.”

Is World Vision helping support the emotional needs of children?

World Vision has set up Child-Friendly Spaces (CFS) to help meet the emotional needs of children impacted by the crisis. In these safe spaces, children can play, engage in informal learning, and express their worries and fears to trained, caring staff. Most importantly, they get a chance to just be a child with other children who are facing the same situation.

The national director for World Vision’s Romania office, Mihaela Nabăr, said the spaces also give children some time to experience aspects of a normal life again.

“World Vision research has shown that conflict has severe and long-term impacts on children. It is vitally important for children who have been forced to flee Ukraine to quickly retrieve some kind of routine, have something to look forward to and have something familiar they can enjoy. And this is what a CFS can partly provide.”

What are other concerns for children in the Ukraine crisis?

Aside from the immediate and long-term impacts of stress on displaced children, World Vision has expressed concern about potential separation from their parents and families, exposing them to heightened risks of violence, exploitation, and abuse. “The children … are suffering. They are here with their mothers, they are separated from their fathers. They are crying. They are scared. The risk of trafficking is huge here at the border,” says Mihaela Nabăr, national director of World Vision’s Romania office.

The food security situation in Ukraine is also concerning. WFP officials warn food is getting harder to find for those left in the country.

The UNICEF Emergency Programs Director, Manuel Fontaine, remarks that nearly half of the estimated 3.2 million children displaced in Ukraine “may be at risk of not having enough food” in cities like Mariupol and Kherson, where people have gone weeks without running water.

About 450,000 children between the ages of 6 and 23 months now need complementary food support, according to UNICEF.

How are children’s educational needs affected by the Ukraine conflict?

Since the start of the conflict on February 23, 2022, more than 733 educational institutions have been damaged or destroyed, disrupting access to education for thousands of children.

“No child should be forced out of school because of conflict,” said Isabel Gomes, World Vision’s Ukraine response director. “We know school provides a sense of normalcy that children caught up in conflict desperately need, in addition to offering them a safe space and protecting their futures. As the response moves into its second month, we’re focused on working with the authorities to help get children back into school.”

Host countries like Moldova are struggling to meet the basic needs of Ukrainian refugees. Moldova is one of Europe’s poorest nations and has the highest per capita refugee population in the region. World Vision is deeply concerned about children losing access to education. Nearly 90% of refugees in Moldova are women and children, with 97% of refugee children still out of school.

“After two years of COVID-19 lockdowns already, the impact that this crisis will have on children’s wellbeing, mental health, and education is frightening,” added Isabel.

What else can I do to help children and families impacted by conflict?

Give to help provide care and support for children and families who have been forcibly displaced and those suffering the broader effects of the crisis.

Contact one of our corporate engagement representatives to get your company involved.

“Globally, 426 million children — nearly 1 in 5 — live in conflict zones. The world’s children cannot bear another war that threatens their well-being, education, and hope in their future,” said Edgar Sandoval Sr., president and CEO of World Vision U.S. “Children are at the center of our prayers for Ukraine as we hope and pray for a swift, peaceful resolution.”

Listen to an interview with World Vision U.S. President and CEO Edgar Sandoval Sr. as he shares how the organization is supporting Ukrainian refugees.