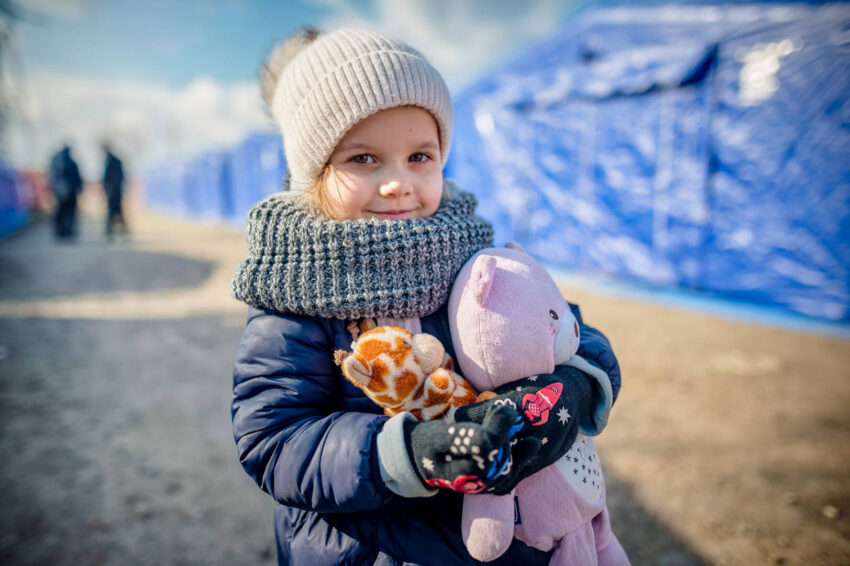 A young Ukrainian girl at a transitional refugee camp in Romania cuddles stuffed animals she brought from home for the journey. (©2022 World Vision/photo by Armenuhi Burmanyan)

Imagine for a moment you have 10 minutes to pack your things and leave home, possibly for the last time. You’re a mother. In those brief moments, you must get yourself and your children dressed for winter, packed, and out the door. In a flurry of scarves and parkas, you gather necessary documents, perhaps throw a few snacks in a bag, and tell your children to pick out one item they love to take with them on the journey.

Millions of Ukrainians are facing these impossible choices as they flee to safety in neighboring countries. Nearly half of them are children. They cross the Ukrainian border on foot, carried in the arms of their mothers or pushed in strollers. The air is so cold that their breath puffs out in clouds. And if you look closely, clutched in their hands are the items they could not leave behind.

In these photos captured by World Vision staff responding to the needs of Ukrainian refugees in Romania, see what children are bringing with them. Consider sharing these photos with your children. What do they notice?

When 7-year-old Kira had to leave her home in Kharkiv, Ukraine, for Romania, the most precious thing she brought was her small terrier, whom she loves dearly. “My dog’s name is Busya. She’s very sweet,” says Kira. “[She] kisses me almost every day on the nose.”

Kira’s grandmother, Ella, says that the family brought very little from home: “We took only our documents and the clothes which we had worn for the past seven days.” In the rush to leave, they couldn’t even grab water for the journey.

Their home was destroyed after they left. “We don’t have a house,” Ella says. “We cry for our house. And we’re going into the unknown.”

Kind strangers have made sure they won’t enter the unknown emptyhanded. “We can’t thank the people who helped us enough,” says Ella. “We received clothes from volunteers because we ran away with only the dirty clothes on our back.”

Ivanya, 8, is a gentle, thoughtful boy who fled Ukraine with his mother and sister, Veronika, 10. Ivanya is staying with more than 400 refugees at a warehouse and office center in Iasi, Romania. He is making the journey to Poland with his mother and sister after spending about a week taking cover in his family’s basement, as the bomb shelter was too far away for them to reach safely.

Ivanya likes being at the shelter, because it’s the first place where he feels safe enough to play with other children and toys since the conflict started. He made some new friends on his first night here, but they have since left for other corners of Europe with their families. Today, he is lonely and taking comfort in his toy penguin, “Mr. P,” the only toy he brought from home with him. When his family made it out of Kyiv by car, he couldn’t take many belongings with him; packing light was essential.

Ivanya’s older sister Veronika, 10, had to leave her favorite toy — a large teddy bear with a hat and scarf — at home. It was too big to bring along. “I like it very much because I’ve played with it from childhood, since I was 6 years old,” she says. “The toy is always with me. We talk to each other when I cry.” She brought another, smaller, teddy bear with her, but she says it’s not the same because it’s not big enough to cuddle when she’s feeling sad.

Seventeen-year-old Mischa says he brought with him only essential items from home, but clearly, he did not arrive empty-handed. In the absence of his beloved father, Mischa tries to remain calm and maintain a brave face for his mother and three little sisters. When asked how he feels, he shared, “My family is trying to support each other and just don’t panic. I always say to them ‘all will be okay, all will be fine, we will win.’”

We invite you to slow down for a few minutes and study the following images taken by World Vision photographers in Romania. You will see Ukrainian refugee children arriving with their families. Clutched in their hands are the items they brought with them from home. What else do you see? What don’t you see? Can you imagine what they left behind?

Brianna Piazza contributed to this article.