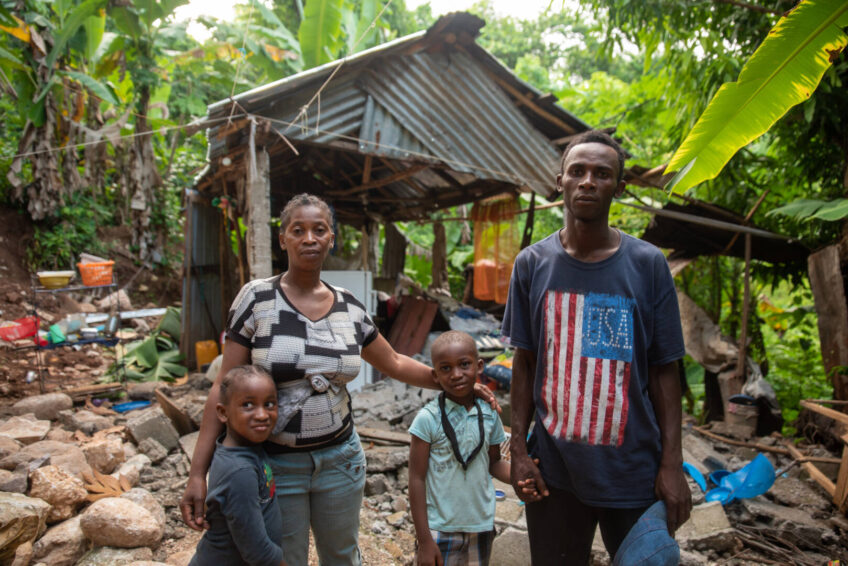 Jasmine (left), her husband, Geffrard, and their two children stand next to what was once their home before a magnitude 7.2 earthquake destroyed their dwelling in the village of Marceline, near Les Cayes, Haiti. (©2021 World Vision/photo by Guy Vital-Herne) 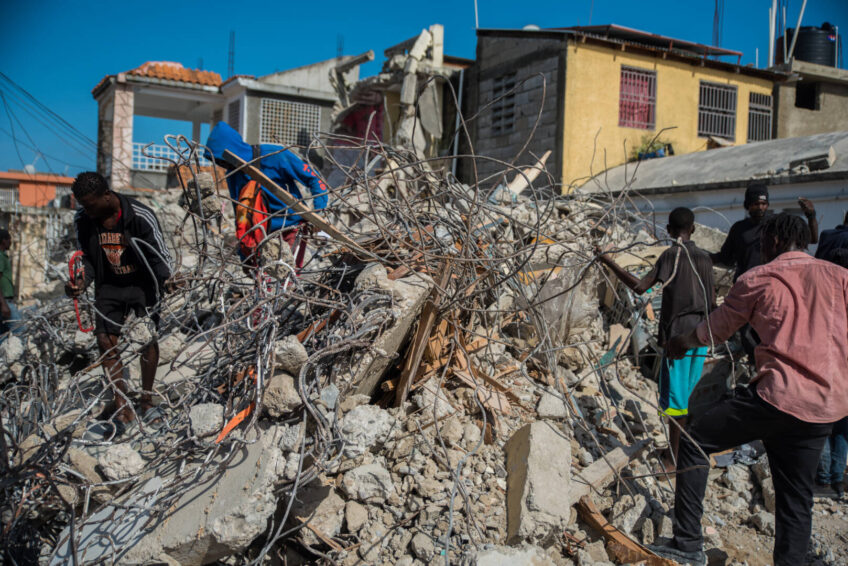 Aftermath of the magnitude 7.2 earthquake in the village of Marceline, Les Cayes, Haiti, shows destruction of houses. Personal items are strewn among rubble, as survivors shift through the ruins of their community. (©2021 World Vision/photo by Guy Vital-Herne)

Guy Vital-Herne is a communications officer for World Vision in Haiti. Guy served as a translator for World Vision after the 2010 Haiti earthquake. He and survivors share their firsthand accounts of the aftermath of the 2021 earthquake, where World Vision is gearing up to help 240,000 people, 60,000 of whom are children, through access to clean water and purifiers, tents and mattresses, food supplies, infant-care kits, and child protection programs.

As we approached the community of Marceline, I could feel a heaviness in the air. Right by the highway, the area was quiet, although many people were standing and walking by the roadside.

Their gazes were vague, in deep sorrow, distant.

We could no longer stay in our car. It felt wrong.

I grabbed my cameras and started walking up the highway following the cracks that cut deep into the road. I couldn’t utter a word. Something was weighing down on me. There was something in the air. Something distant but familiar. Something I’d lived through before and that I could never forget.

It was the smell.

I realized what had happened when I saw three birds flying in a circle. Someone told me that they’re flesh eaters. My heart sank.

The feeling that laid on me all this time, this heaviness, the respectful silence.

I was in a cemetery. Everybody here was mourning someone: a parent, a child, a friend, a neighbor. Nothing could distract them from their sorrow and their pain.

Some were sitting by the side of the road, deep in thought. Others were going through the wreckage, desperately trying to save some clothes, a mattress, some utensils, anything that could be used for the next few days — the next few uncertain, puzzling, somber days.

On Saturday, August 14, 2021, Haiti was rattled by a magnitude 7.2 earthquake that ravaged the island’s southern peninsula. The shockwaves spread panic across the whole island, brought death and desolation to thousands of families, overwhelmed hospitals, flattened buildings, and trapped people under rubble in at least two cities in the western part of the southern peninsula.

According to data released on August 22 from the Directorate of Civil Protection, 2,207 people died, at least 12,268 people are injured, and 334 people are still missing. 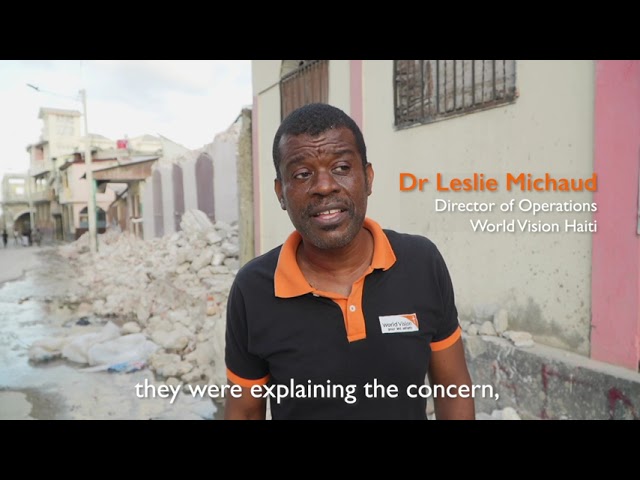 In a community called Marceline in Camp Perrin, Jasmine, the mother of three girls and a boy, was at home when the first tremors started.

“We were all in the house on that day. Some of us were already up and about. I was still laying down on the bed with Nelly, my 5-year-old girl, by my side. All of a sudden, I felt something throwing me up in the air violently,” says Jasmine.

Her husband, Geffrard, was coming back from a motorcycle ride and was met by Djaens, their 6-year-old son, who ran to him with open arms.

“The next thing I know, I was buried under dirt and rubble from the landslide. I held onto my boy, covering him with my body. My wife was calling out to me to save her. I felt like I was in the middle of the sea, drowning and unable to swim,” says Geffrard.

The landslide brought down a huge boulder from the hillside that broke through the walls of the house.

“I grabbed Nelly and held on firmly to her while crying. ‘Jesus! Jesus! Are you going to let me die with my baby? Jesus! Save me!’” says Jasmine while firmly hugging Nelly.

I could feel that she was back to the dreadful day.

On Sunday, August 22, 2021, World Vision deployed a rapid assessment team to the three affected areas of Nippes, Grand’Anse, and South.

“I prayed last night, asking God if it’s because of our sins that we are suffering so much. I cried a lot last night. Nelly was on my shoulder and my son with his father. My older daughter, Ruthla, hugged me and tried to console me by telling me not to cry and saying that we still have life,” says Jasmine.

The latest data from the Directorate of Civil Protection estimates that more than 52,000 houses have been destroyed and more than 77,000 damaged. Families had to live through Hurricane Grace unable to protect themselves from the elements.

“When I look at the children, we are in the streets, sleeping under the stars, getting wet by the rain. We don’t have anything to feed the children. That’s so sad,” says Jasmine.

The children are more than hungry — they’re still frightened.

“The children are traumatized. Whenever they hear a noise, they panic. We don’t have anything to make a shelter,” says Geffrard.

The church building is destroyed — broken in pieces — a symbol of the broken spirits in this community. “We will need a lot of help. Psychological help will be very important,” says Pastor Rodney Joseph Samuel. “People will need help to rebuild, to get up from this disaster.”

“I lost my mother,” says Pastor Rodney. “A lot of the church members died in their houses. I have three funerals planned for Saturday and some more on Sunday. I have to do it.”

For now, Marceline is a cemetery. A place of mourning. A place of sorrow and pain. A place that needs Jesus, now more than ever.

When disasters strike, World Vision is there. Help us respond wherever help is needed.