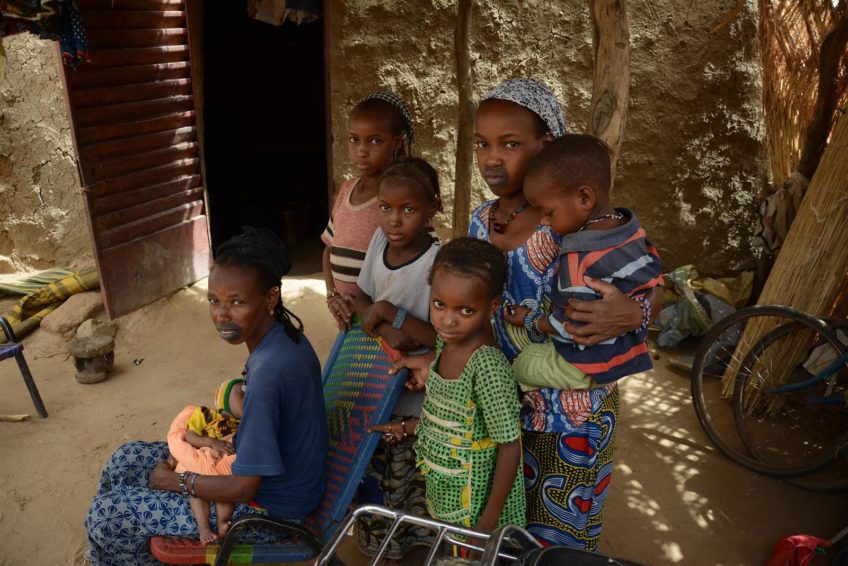 “I still feel afraid,” says 30-year-old Mariama Bari, a mother of six who fled her home because of armed conflict in Central Mali. (©2018 World Vision/photo by Joelma Pereira) 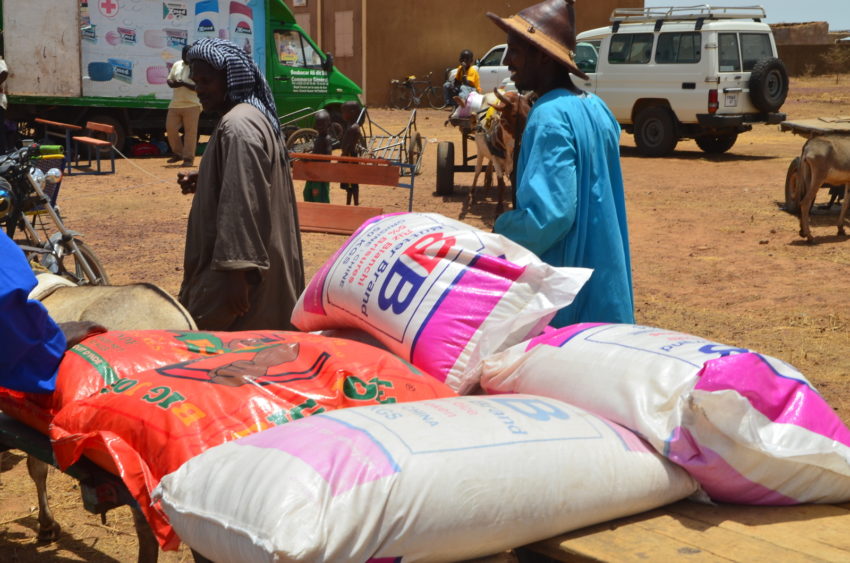 Sacks of food arrive distribution in Ko, a central Mali community affected by both drought and conflict. (©2018 World Vision/photo by Joelma Pereira) 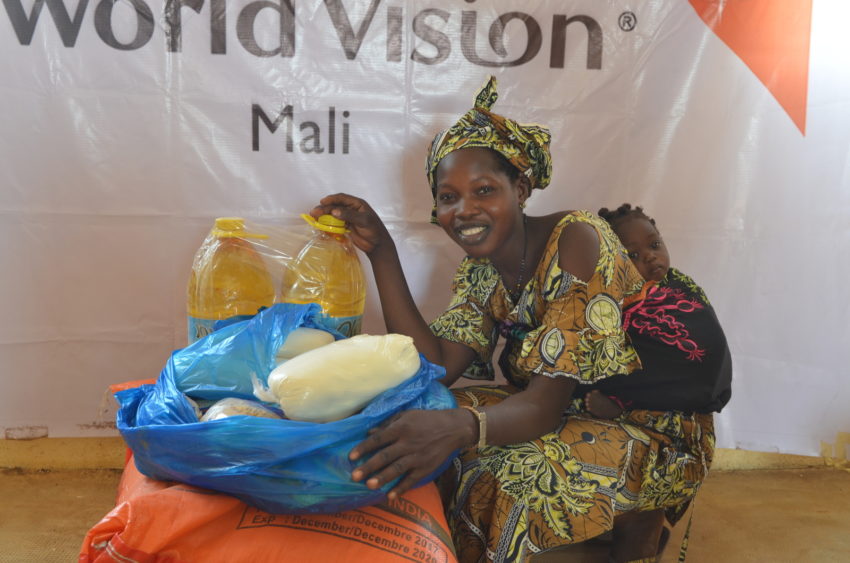 “My husband is a rice farmer, but last year the harvest was very bad,” says Fatumata Troure, 20. She depends on a World Vision food distribution to have enough to eat and a balanced diet for her family. (©2018 World Vision/photo by Joelma Pereira) 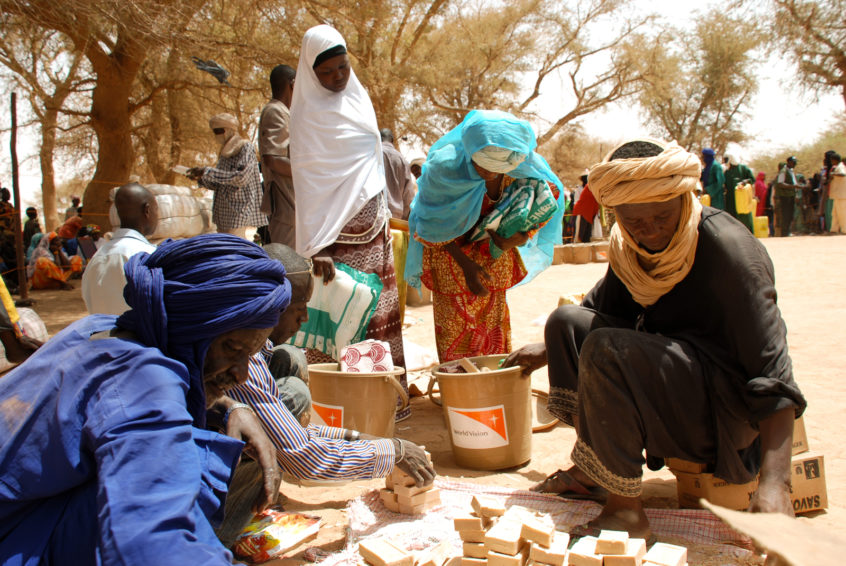 Once an emerging force for democracy in West Africa, Mali has struggled in recent years to maintain governmental stability. A coup in 2012, ensuing military intervention in the north, and regular uprisings by rebel and extremist groups throughout the country have left the nation of about 19 million people vulnerable. Conflict in Mali continues as frequent and severe droughts have added to the country’s challenges — as has COVID-19, which has now reached all areas of the country. The coronavirus has put a strain on the nation’s poor healthcare system and worsened economic decline.

FAQs: What you need to know about the Mali conflict

Explore facts and frequently asked questions about conflicts in Mali, and learn how you can help children and families affected.

Fast facts: What are the humanitarian conditions in Mali?

How are conflicts and droughts affecting children in Mali?

About 1 in 3 children are stunted — short for their age — indicating high levels of chronic malnutrition. Drought and poverty are behind the spike in undernourished children, but lack of clean water and sanitation also play a part.

Children who are displaced often don’t have access to the healthcare and education services they need. Increasing conflict endangers children and other civilians, especially in Mopti and Menaka, where intercommunity attacks have led to displacements and several deaths.

What are the greatest needs of children and families in Mali?

The greatest needs of children and families in Mali are food security, health, and all aspects of child protection. Without reliable sources of food, families are cutting back on how much they eat and more children are becoming malnourished. As many as 4.3 million people don’t have enough food.

More than 2 million school-aged children were not enrolled in school before the coronavirus, and over half of Mali’s youth ages 15 to 24 are not literate. With children vulnerable to violence and recruitment into armed groups, they need opportunities for education and strong support systems within their families and communities.

How can I help people in Mali?

Pray for children and families affected by hunger and conflict in Mali and other West African countries.

How does World Vision help people in Mali?

World Vision responded to a drought in Mali in 1975, opened an office in 1982, and began child sponsorship there in 1988.

Since then, some of World Vision’s major accomplishments have included:

During the height of the political upheaval in 2012 and 2013, World Vision staff worked to provide emergency food aid, shelter, access to safe drinking water and improved hygiene facilities, and household necessities to about 150,000 people throughout the country. About 65,000 children are currently registered in World Vision child sponsorship programs in Mali; almost 21,000 of them are located in conflict-affected areas.

2011 — The drought and hunger crises in West Africa come to the world’s attention, but continue today.

2012 — In January, Tuareg ethnic rebellion in the north sets off massive displacement as people flee fighting. Military officers overthrow President Toure in March. Then in April, Tuareg rebels seize northern Mali and declare independence, calling the state Azawad. From June to July, other rebel groups seize territory and continue conflict in the north. In November, the African Union deploys troops to quell violence in the north. By now, more than 112,000 Malians have fled the violence as refugees to Burkina Faso, Mauritania, or Niger. At least 250,000 more residents are displaced within Mali.

2013 — In January, French and Malian forces recapture much of the north. On May 15, international donors pledge more than $4 billion to help Mali get back on its feet. Then on June 18, rebels and the Malian government sign a peace agreement that prepares the way for elections. In July, a 12,600-strong U.N. military and police force takes over to help stabilize the country. On Aug. 11, the Malian people peacefully elect Ibrahim Boubacar Keita as their new president in a runoff election. Before the coup, Mali’s democracy was considered a success story among West African nations.

2014 — Fighting continues between the Mali government and militias in the north.

2015 — The Mali government negotiates peace with militias and allows more regional autonomy for the Tuareg ethnic group in a peace deal aimed at ending years of civil conflict in the northern regions.

2017 — The people of Mali continue to experience the effects of violence and insecurity from multiple attacks by extremist groups and clashes between rebel factions and communal groups. About 142,000 Malians still live as refugees in neighboring countries.

Sponsoring a child in Mali is a personal way to show God’s love to a child in need.