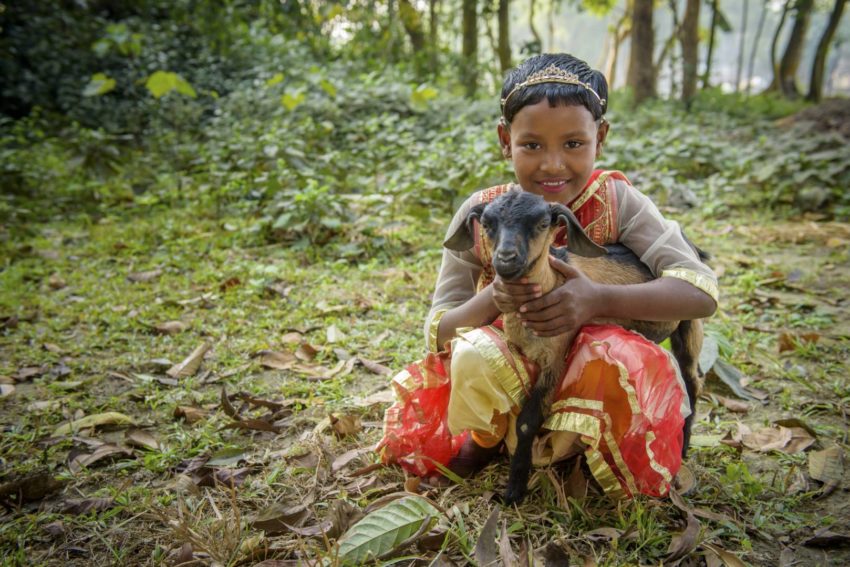 Sonali holds one of the goats her family received from World Vision. She enjoys caring for goats, and the goats are making her future brighter. (©2017 World Vision/photo by Laura Reinhardt)

A couple years ago, Sonali Akter and her family visited the hospital where her grandmother was having surgery. The flurry of activity and fancy machines was a new world for the girl from a small community near Mymensingh, a city about 70 miles north of Bangladesh’s capital city, Dhaka.

But something else caught little Sonali’s attention. There, the wide-eyed girl saw women working as doctors.

“It was surprising,” Sonali, now 8, says. “It encouraged me to want to be a doctor.

“I would like to do surgeries and give medicine.”

In a country where less than half of children attend high school, Sonali’s experience had given birth to a seemingly impossible dream.

A medical career felt like a long shot, given Sonali’s family’s poverty, which was so deep that they were the laughingstock of their community.

Sonali’s father, Shohel Miah, was only able to get work about half the month as a day laborer. Earning only 200 takas—about US$2.48—a day, the 30-year-old struggled to support his family of four. People would ridicule him for not being “man enough” to support his family.

“Because I was poor and I was not earning a lot, people avoided me,” he says. “I thought, ‘Maybe one day I will be able to change my situation and people will be good to me.’”

Sonali’s mom, Mahfuza, 26, hoped for a change too. Her children often went hungry. She knew animals would supply eggs and milk, but the chickens and goats she raised would sicken and die. When Sonali and her brother, Maruf Islam, now 4, would ask for things like clothes or school supplies, Mahfuza couldn’t afford them.

“I felt Sonali would be dropped from the school,” she says. “The teachers were rude with her and scolding her” for not having the right supplies.

Mahfuza felt helpless and frustrated, knowing there were things her children needed that she was powerless to provide. “I felt I was a bad mom,” she says. “I was sad for that, and I thought if I could get them what they were asking for, I would be the happiest mom in the world.”

Ridicule from neighbors and others in the community compounded her distress. “People said mean things,” she explains. They would laugh at her children’s torn clothes and scorn her husband for not providing for his family.

Sonali could sense her parents’ struggles. Mahfuza remembers that her daughter would try to cheer her up, saying, “Mom, don’t be sad. When I’m educated and get a good job, I will give you money, and I will buy you everything.”

In late 2012, World Vision identified Sonali’s need, and she became a sponsored child. Through sponsorship, she received a bed net to protect her from mosquito-borne diseases, as well as a blanket, school supplies, and other necessities. Finally, Shohel says, “I felt encouraged.”

The support was welcome, but the family needed more—and they weren’t alone. Fortunately, help was on the horizon. In 2013, World Vision had started the Sundor Jibon (“Nice Life”) project, designed to reduce child malnutrition and increase family income and assets.

Sonali’s family was chosen to receive goats and chickens. But the animals weren’t just handed over: To ensure success, families were required to attend training classes about animal rearing and breeding.

Mahfuza was delighted. “Earlier when I raised goats, they were dying, so I was excited to learn how to make them live,” she says.

World Vision determined that families throughout the area equally struggled with raising their livestock. As a result, child malnutrition was widespread, with only about 1 in 10 households regularly eating foods from four or more food groups. Across Bangladesh, nearly half of children are stunted physically due to a lack of proper nutrition.

Mahfuza knew that the poor diet was affecting her daughter. “Sonali could not talk well,” she says. “She was a slow learner and had a speech problem.”

Having confirmed that Sonali and Maruf were malnourished, Mahfuza eagerly attended nutrition classes, where she and other mothers learned how to prepare balanced meals for their kids. Each woman would bring one ingredient to class—a pumpkin, ginger, eggs, and so on—all items that were grown or purchased locally. Together the women would cook a new recipe and learn how each item supported their children’s nutrition. Then they would enjoy the meal together.

Mahfuza also learned how proper hygiene could prevent illnesses, and the center provided child vaccinations too. Sonali and Maruf were enrolled in an early childhood care and development program, where World Vision staff monitored them to ensure their health was moving in the right direction.

“My daughter was very skinny,” Mahfuza says. “When I started feeding her better, I noticed her health was improving.”

Sagor Marandy, a regional field director for World Vision in Bangladesh, explains that the educational component of the program was a bedrock foundation for the participating families. “Money is important, but mindset and education [are critical],” he says. “It takes time to learn and change practices. If they stay focused, their lives will change.”

Goats and chickens to help

After months of preparation and education, Sonali’s family received three goats and 20 chickens in 2015.

“That day we got the animals, I was very happy,” Shohel says. “… I thought [now] I could change my situation.”

The goats enthralled Sonali. She named the first one Moushumi, which means “season” in Bangla, the local language.

“I was happy when we got the goat because I was able to feed the goat grass, leaves, and rice,” Sonali says. “I played with the goat, and the goat was jumping!”

Sonali shines as bright as her name, which means “golden,” when she talks about nurturing the animals. She enjoys bringing the goats with her as she does her daily routine and even when she takes a bath. She’s clear, though, that she doesn’t bathe the goat “because it could get cold and die—cold is the enemy of the goat.”

Mahfuza shares that this was one of the biggest lessons she learned in her training. “Earlier I was having the goat sleep on the ground, and it would get cold and die,” she says. “Now, it’s on a bed of wood, off the ground, and stays warm.”

Sagor explains that economic improvements through livestock investments are a process. “You can’t expect dramatic change overnight, but in six months, there are more chickens; in a year, one goat becomes two,” he says.

That’s borne out by Shohel’s and Mahfuza’s experience. With faithful implementation of what they’ve learned, the family has seen their animals multiply. They now have five goats and 25 chickens, and Mahfuza has sold more than 60 chickens for a total of 8,000 takas (US$99). Their brood of 25 produces enough eggs for the whole family to eat, with enough left over to sell for between 500 and 1,500 takas (US$6 and US$18) a month. The goats also provide fresh milk for Sonali and Maruf to drink, giving them nutrients they weren’t getting before.

Late in 2016, Mahfuza purchased eight ducks with some of her profits. She’s excited to see even more income, as duck eggs are more profitable than chicken eggs. She’s also participating in a cow-share program with a neighbor, whose calf will soon birth a calf for her to keep.

The change in her family’s life has been steady and encouraging. Sagor says they have “moved from being the poorest [in the community]. In one to two more years, they will likely be middle income.”

Change has been widespread across their community. In two years, animal and egg production have drastically increased; chicken egg production alone has increased more than 10,000%. Thanks to the nutrition training and food production improvements, now more than 3 in 4 households have diets regularly including four food groups, compared to 1 in 10 in 2014. What’s more, before the program began, just over half of participating households were earning a consistent income. That number has skyrocketed to 99%.

Thanks to his family’s increased income, Shohel has been renting an auto-rickshaw a few evenings a week to earn around 250 takas (US$3.10) a day. He’s saving to buy his own auto rickshaw so he will no longer have to rent, and he dreams of having a farm with at least 100 goats. Additionally, the family has saved about 10,000 takas (US$124) for a down payment and secured a loan to buy a small piece of land to call their own.

Shohel says, “Now I feel I have a good life, and the community people honor me, and they try to talk to me. Before, I felt I was isolated, but now I feel I am included in the society.” Mahfuza agrees. “I’m not hearing anymore the bad or mean things the people were saying earlier,” she says. “People are encouraging me and saying I am in good hands and earning for my children.”

Sagor says the program has also resulted in changes in how men in the community view and treat women. He says there has been a decrease in domestic violence, and men are more respectful toward their wives.

It’s clear that Shohel is proud of Mahfuza and her efforts. “My wife is doing a lot for the family and the children, and I’m so encouraged by her hard work,” he says.

For her part, Mahfuza now feels hopeful for the future. “I’m very happy to work with World Vision because my children are getting benefits, and so am I,” she says. “Because of that, I can afford food and education for them.”

Thanks to sponsorship and the gift of animals, Sonali is healthy and thriving in school. Her parents plan to do all they can to make her dream a reality. Says Mahfuza, “I dream now that if World Vision walks beside me, I can continue Sonali’s schooling so Sonali can become a doctor.”

Give a goat to help a family like Sonali’s.

Give a Goat
Our Work :
Child Sponsorship
Location: