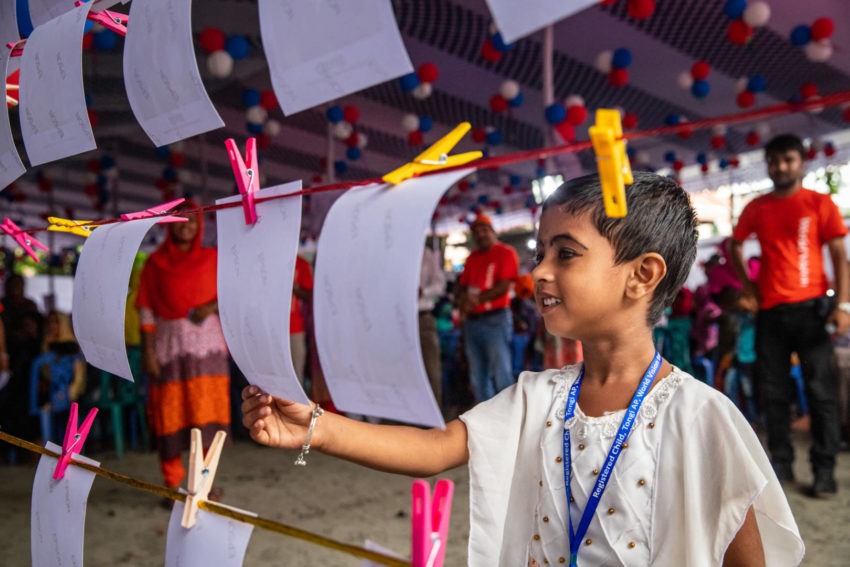 A girl in Tongi, Bangladesh, selects her sponsor during a choosing party. Through the Chosen program, World Vision has empowered children to choose their sponsors, a reversal of how child sponsorship has worked for decades. (©2019 World Vision/photo by Chris Huber)

Note: Stories and photos were gathered before the COVID-19 pandemic began.

In the autumn of 2019, as the changing leaves marked the turn to a new season, World Vision launched a new invitation to sponsorship — Chosen. For the first time, children were empowered to choose their sponsor. In 10 countries, more than 10,000 children have approached a wall of photos and made, for some, their first important life choice by choosing a sponsor — someone who will believe in them, encourage them, and pray for them. Here are some of their stories.

Habiba’s older brother just finished ninth grade, but had to leave school because their parents couldn’t afford his exam fees. “It comes with tears,” says their mother, Hasina Talukdar. If Habiba’s parents can’t afford her fees, they will arrange a marriage for her. But Habiba, 6, has bigger plans for her life. She hopes to serve her nation as a doctor, and child sponsorship can help her get there. Habiba was the first child in Bangladesh to choose her sponsor. When she approached the wall of photos, she thought, “It is difficult to choose because there were so many photos.”

But in the sea of smiling faces, her eyes narrowed in on one woman — Sarah Dibbern, a child and youth minister from Minnesota. Habiba chose her because, “She is beautiful and her smile.” When coworkers from Sarah’s church texted her from Bangladesh and shared that she was the first person chosen, that day in Bangladesh, she began to cry. She says, “It’s incredible that we have a God who chooses all of us and will continue to choose us, no matter what.”

Cirila sings a song about a cow named Lola with pure, innocent joy. Sadly her family life isn’t so happy. Her father drinks a lot and doesn’t support the family, which makes life hard for her, her two siblings, and their mother, Gregoria Carrillo. But last year, Cirila got the opportunity to choose her sponsor — Lida and Barry Stewart of Indiana. “I like everything about them — the smiles that they have,” she says. “I like the lady because she has blonde hair. He looks like a very good person.” Gregoria was excited for her daughter, saying, “I felt very happy, very content. She gets to decide who is going to be a part of her life.”

Farther north in the U.S., Barry and Lida were excited, too. “I see the kids choosing as a way to make them feel like somebody,” Barry says. Lida agreed. “This is such a good idea,” she says. “It gets people to act. It touches the heart.” With support from her sponsors, Cirila has a brighter future. “I want to be a teacher,” she says. “I want kids to learn.”

Matilda says she wants to become a nurse when she completes school. The 9-year-old who lives in Moyo, Zambia, says this is her dream because it makes her sad seeing little children suffer from diseases. Last year, Matilda had the opportunity to choose her sponsor, and of all the faces that stared back at her on the photo wall, her eyes narrowed in on one. “I chose this picture because I was captivated with my new friend’s smile,” she says.

That new friend was Kelly Dean, a woman from Oklahoma who smiled despite so much pain she had recently been through. A few months earlier, her husband had passed away, and she had been his caretaker for five years. While attending a Big Daddy Weave concert, she says, “When I saw the video of children who needed sponsors, I felt that signing up to sponsor a child would help me as much as the child who chose me.” By saying “yes” to be chosen, Kelly has now empowered Matilda and can encourage and pray for her. Kelly says, “I love her already and look forward to knowing her better through our letters. I can’t wait to see God move in her life and her home and her village.”

Heather Klinger, Andrea Peer, and Laura Reinhardt of World Vision in the U.S. contributed to this story.