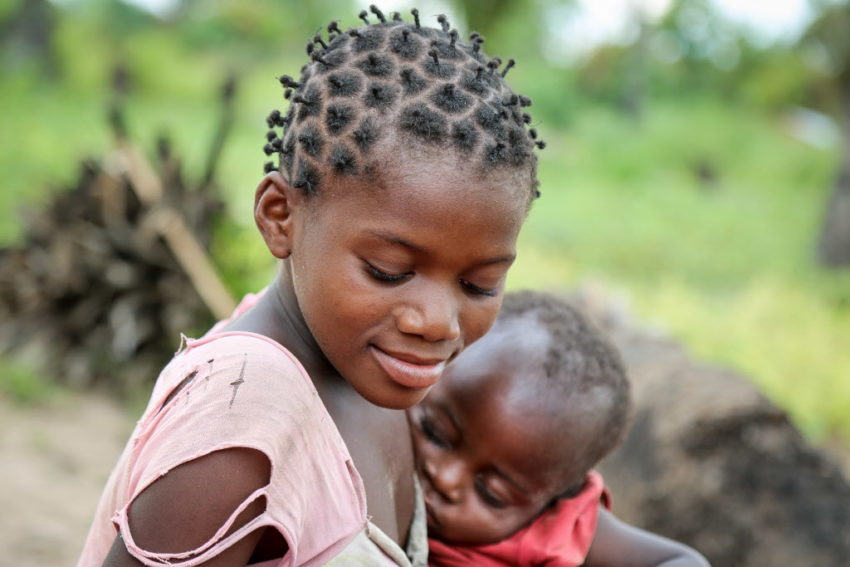 Young children in the Kasai region of the Democratic Republic of the Congo are brought to a Child-Friendly Space. (©2018 World Vision/photo by Wezzie Banda)

Childhood should be about fun and games — not worrying about grown-up stuff. But for millions of children around the world, their childhoods end early because they have to work, aren’t able to go to school, or worse.

For far too many children, violence and disaster displace their childhood.

In times of disaster and crisis, World Vision establishes Child-Friendly Spaces — places where children can go to feel safe, play, and begin recovering from trauma.

World Vision staff who work in these Child-Friendly Spaces have a unique perspective on childhood and why being able to play and just be a kid is a crucial component of learning and recovery.

Today, we hear from some of these staff members working in our Child-Friendly Spaces around the world.

James East is an emergency communications director for World Vision.

I was recently in Cox’s Bazar, Bangladesh — a place to which hundreds of thousands of children have fled to escape violence in neighboring Myanmar. Many have lost loved ones. So World Vision has set up a number of Child-Friendly Spaces to help children who witnessed horrors that are difficult to imagine.

These spaces are essential because children here are not in school and need a place to meet and make new friends. It is great to see children laughing, playing, and singing. So many refugee children have lost their moms and dads, and you can’t put a price on providing a place for children to be kids again.

Parents, many of them single moms, are struggling to cope with living in a camp with next to nothing, so it’s a huge help for them to have a place where their children can go and be watched over and cared for. Without Child-Friendly Spaces, children are left to wander the huge, sprawling camps unmonitored. No one wants that for their children, especially when you are living among strangers in a foreign country.

Reynald Ramirez is a World Vision staff member based in the Philippines.

Six-year-old Norhussein starts his day by singing nursery rhymes, reading the alphabet, and playing inside the World Vision Child-Friendly Space, a temporary shelter for families displaced by the Marawi Crisis. For Norhussein, this tent classroom is a happy place and a far cry from their bad experience, which led them to flee their communities because of the armed conflict in Marawi City last year.

“I go to the tent classroom every day because I enjoy listening to the teachers and playing with my friends,” says Norhussein.

For these students, the tent is their safe haven. “The children are assured that they are safe when they are with their teachers. They still visit the tent to play even without classes,” shares Norhana Radia, a play-based learning volunteer. The majority of the children in her class are residents of the most affected area in Marawi City.

One year after the crisis, Radia says the children have forgotten the sound of bombs because of the classes. “Now they just remember the nursery rhymes we teach them,” she says.

Edouard Ndong is a World Vision child protection and participation technical adviser. He implements projects and trains the staff at Child-Friendly Spaces.

I met a child who before attending a Child-Friendly Space was completely isolated, did not play with others, and didn’t even speak. He was always in the corner. After a few weeks at the Child-Friendly Space, he started playing, talking, smiling, reading, and even singing the country’s national anthem. His own mother came to us to ask what we did to help with this positive, dramatic change.

Blerina Lako works for World Vision in Albania; her work focuses on child development and protection. She recently spent a month setting up a Child-Friendly Space for Syrian refugee children in Azraq camp in Jordan.

Play is very important for children, especially for boys and girls who experience difficult situations. Play leads to positive development and helps build life skills and resilience. These are crucial to building psychosocial well-being, resilience, and peaceful relationships for children exposed to conflict, violence, and displacement.

Active play also helps promote emotional well-being for children and enhances their learning process. Evidence indicates that children who do not engage in high-quality play may have diminished cognitive abilities. Play is also important in the development of language comprehension and production. Play not only provides social opportunities for children but also improves social cohesion between families and community members.

Democratic Republic of the Congo

Wezzie Banda is a communications manager for World Vision.

In Kasai, World Vision has operated six Child-Friendly Spaces since August 2017 to help support 7,320 children. We intend to establish more spaces as well.

Lives of distressed children at Child-Friendly Spaces in Kasai are becoming more normal. By regularly associating with friends and participating in different activities, children are able to get rid of fear and shocking encounters they experienced during the war. Some of the children I interacted with indicated they feel safer at the Child-Friendly Space than their homes, where they would often be alone and felt the war would come again.

Extracurricular activities at the Child-Friendly Space enable them to catch up with lessons they missed when they stopped attending school due to war, and activities such as sports, singing, and dancing enable them to get rid of their worries.

Some of the spaces are able to provide porridge for children. This is helping to improve nutrition for many children who spent months with their parents hiding in the bush where proper food was scarce.

Duuki Richard is a child protection coordinator for World Vision in Uganda.

During my interactions with children in Child-Friendly Spaces in the Bidi Bidi refugee camp, I witnessed tremendous improvement in children’s psychological well-being and learning.

When I met these children, their faces told me that hope was lost, trust in humanity was not imaginable, and life was a total misery. This followed the traumatic events they had experienced in South Sudan. At the time, many children could hardly open up about their lives from South Sudan, though the signs of distress were visible — flashbacks, violent reactions, and voluntary isolation. The few who could open up hardly finished a quarter of the story without breaking into tears.

As we engaged in numerous psychosocial support activities, the stories started appearing gradually. First in the form of drawing, but over time it became easier to unearth their stories. We managed to track the stories of individual children basing on the drawings they shared.

The art of music therapy, sports, and continuous peer-to-peer support enabled children to regain hope. One child later confessed she had thought her story was the hardest, but by listening to other children’s bitter life stories and receiving support from them, she realized she could support other children who had witnessed even worse situations.

Philiam Adriko is a World Vision interim project manager for child protection in emergencies based in the West Nile region.

Mabior (name changed to protect privacy), a 12-year-old South Sudanese boy, was one of the many distressed children I have interacted with at a Child-Friendly Space. He escaped from the civil war in South Sudan physically unhurt but with psychological trauma. He lost contact with his parents because of the war.

The traumatic scenes of war he experienced had a negative impact on him. On a daily basis, Mabior would come to the Child-Friendly Space and isolate himself. He didn’t freely interact with other children, and he got easily angered.

One day I came to the Child-Friendly Space with crayons, paints, and art papers. I asked the children to draw their future dream. It was at this point that Mabior came closer for the first time. He drew a picture of a man with a knife stabbing a fellow man. I then realized Mabior was psychologically distressed.

After six months, Mabior could talk with me and other caregivers and play a few games with other children at the Child-Friendly Space. Later, Mabior revealed that he had witnessed the killing of his relatives, and children as young as 10 had killed people with guns and machetes without fear. He kept thinking about this day in, day out.

Mabior continued to come to the Child-Friendly Space and participate in psychosocial support activities. Over time, he began to freely interact with other children and caregivers during drawing sessions.

Later, Mabior was able to return to school, where he joined a World Vision-supported peace club. He did well in class, and the school approached World Vision to help support Mabior. Today, Mabior is my sponsored child. From an isolated unaccompanied child to a brave young man, Mabior now wants to become a doctor so he can return to serve his community so they can have better health.