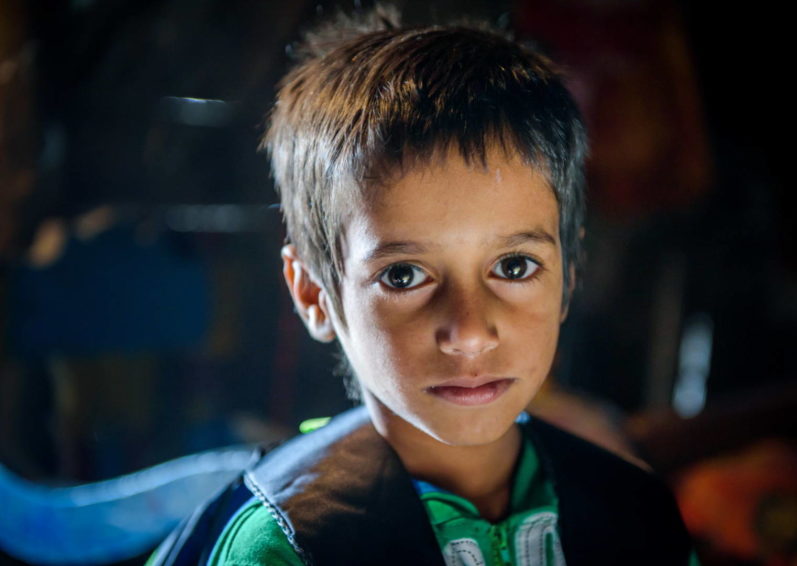 Sabbir, 7, and his 11-year-old brother, Babu, carry packages and bags for money in Mongla, Bangladesh. They work about 13 hours a day and sleep in parked buses. They also pick up trash to sell. It’s a dangerous and exhausting way to live. (©2017 World Vision/photo by Laura Reinhardt) 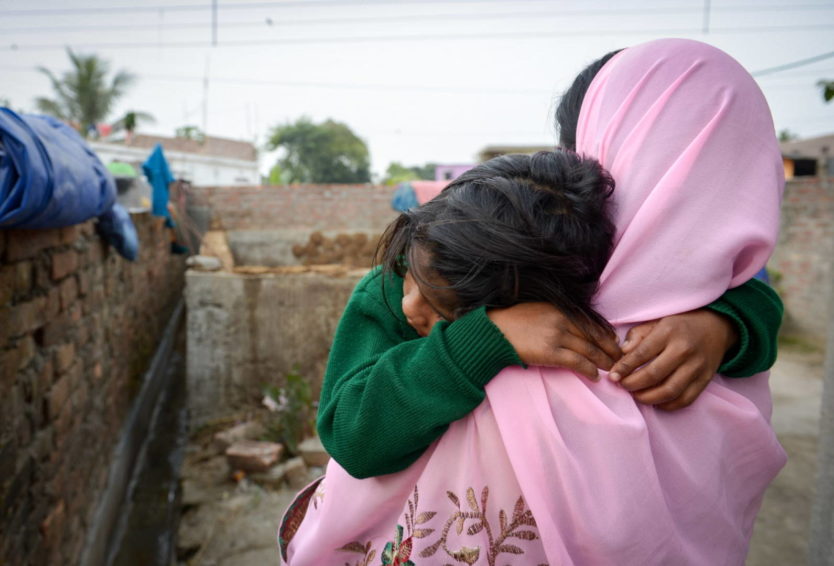 Disha (name changed to protect privacy), 7, clings to her mother. When she was 6, she was kidnapped on the way to school. Local child protection volunteers spread the alert and a police officer located her with two men in another Indian town that’s well known for child sex trafficking. After 13 hours, she was returned home. (©2016 World Vision/photo by Annila Harris) 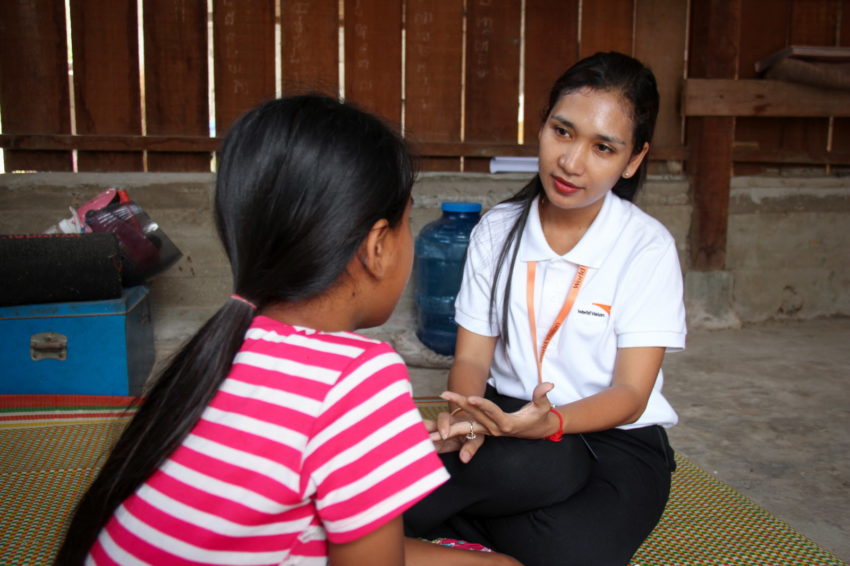 Chenda (name changed to protect privacy), 13, meets with a World Vision trauma recovery manager. At her home in Cambodia, she was brutally raped, beaten, and strangled by a family friend, who also killed her dog. Counseling at the trauma center has helped her recover. She is doing well in school and has become confident enough to lead prayers in her Bible study group. (©2016 World Vision/photo by Ratha Ung) 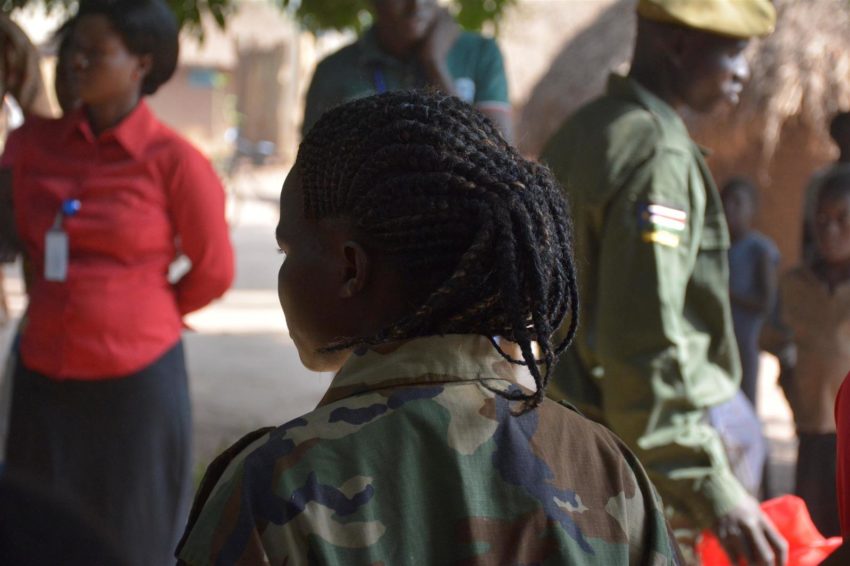 Agnes (name changed to protect privacy) was 13 years old when she was abducted by one of South Sudan’s armed groups and forced to join the country’s brutal conflict. She was released in February 2018 after three years as a child soldier and is receiving counseling and support to rebuild her life from World Vision case workers. (©2018 World Vision/photo by Mark Nonkes) 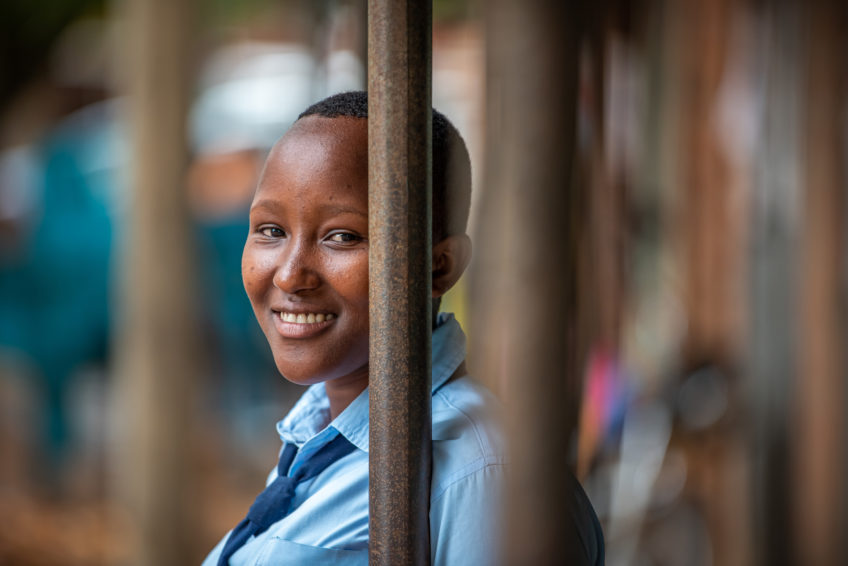 Sixteen-year-old Janet escaped child marriage when she was 15. As chairperson of her school’s child parliament in Uganda, she knew how to reach out for help when her father set her up for an illegal child marriage. Her mother and local authorities helped her avoid marriage and get back to school. (©2018 World Vision/photo by Jon Warren)

Around the world, child rights are a topic of concern in every country. Every child, regardless of age, race, gender, wealth, or birthplace, deserves not just to live, but to thrive. Yet millions of children’s basic rights are denied and their childhoods are stolen from them by abuse, exploitation, or slavery.

Many violations children face are a consequence of exploitative practices and education gaps in both developed and developing communities. But poverty, exploitation, and violence are not inevitable. With enlightened support from governments, civil society, and religious groups, vulnerable children can flourish and reach their highest potential.

1924 — The League of Nations adopts the Declaration of the Rights of the Child. The short document recognizes that “mankind owes to the child the best that it has to give.” The declaration is the precursor to later child rights measures by the United Nations.

1959 —  The U.N. adopts an expanded Declaration of the Rights of the Child.

1962 —  The publication of a study on battered-child syndrome in the U.S. leads to statutes making the reporting of child abuse and neglect mandatory for certain professionals such as doctors, teachers, and social workers.

1973 — Marian Wright Edelman founds the Children’s Defense Fund to conduct research and lobby for child welfare and rights in the U.S.

1974 — The U.S. Congress passes the Child Abuse Prevention and Treatment Act to fund state-level development of child protective services. The law is amended in 2010 to address issues around trafficking and then again in 2016 to incorporate the needs of children affected by substance abuse.

1989 — The U.N. adopts the Convention on the Rights of the Child, which has been ratified by more countries than any other human rights agreement.

1994 — U.S. Ambassador to the U.N. Madeleine Albright signs the Convention on the Rights of the Child on behalf of the U.S. The Convention has yet to be ratified by Congress.

1999 — The U.N. adopts the Worst Forms of Child Labor Convention.

2000 — The U.N. adopts protocols forbidding child prostitution, child pornography, the sale of children, and the involvement of children in armed conflict. These were unanimously ratified by the U.S. Senate in 2002.

Facts and FAQs: What you need to know about child rights

Here are facts about some of the ways children are exploited and answers to questions about child rights.

What are child rights?

Child rights are human rights that also recognize the special needs for care and protection of minors — generally defined as anyone younger than 18.

International agreements on child rights say that all children should grow up in the spirit of peace, dignity, tolerance, freedom, equality, and solidarity. In an ideal world, these tenets would direct each country’s systems of education, health, law, and social services. Unfortunately, this is not always the case.

How are children deprived of their rights?

Child labor, child marriage, children recruited into armed conflicts, and other forms of oppression deprive children of their rights. Children are also deprived of their rights when their birth is not recorded, so they don’t have a birth certificate, or when they are forced to flee conflict.

The International Labor Organization (ILO), estimates that 152 million children are working as child laborers around the world. These children are denied the opportunity to go to school, play with friends, or receive the right nutrition and care for a healthy and fulfilled life; instead, they are forced to work long hours for little reward.

Millions of children are being exploited through mentally and physically dangerous work that involves hazardous workplaces and other exploitative acts such as slavery, drug trafficking, prostitution, and armed conflict. These environments negatively impact a child’s well-being and development and often deny the child’s right to health and survival, protection, and education.

Is progress being made in protecting children’s rights?

Yes, improvements in child mortality, healthcare, and school attendance are some of the signs that children’s rights concerns are receiving greater recognition. These are aspects of human development that give children a brighter future.

Globally, progress is also being made against some of the worst violations of children’s rights. For example, in the past decade, 25 million child marriages have been prevented, according to UNICEF, the U.N. children’s agency.

The U.N. reported in June 2019 that 13,600 child soldiers were released and participated in reintegration programs in 2018, up from 12,000 children the year before. Still, nearly 240 million children are living in countries affected by conflict, and many are at risk of being recruited as child soldiers. Sadly, 12,000 children were killed or maimed in conflict in 2018.

Child labor and female genital mutilation are also declining, but progress against the practices vary greatly in different countries.

What can I do to protect children worldwide?

What is World Vision doing to promote and protect children’s rights?

At World Vision, we believe every child deserves a childhood, surrounded by protective families and communities, free from violence, and with the opportunity to thrive and the experience the abundant life Jesus promised.

We are a global leader in empowering families and their communities to protect children’s rights. Our community engagement model  enables us to address the complex root causes of problems that rob children of their childhood. We engage all people who have a responsibility to protect children, starting with families, faith communities, and extending to teachers, local and traditional leaders, police officers, hospitals, government agencies, and courts of law.

World Vision advocates protection for children to ensure they are healthy, protected, and thriving. We regularly call on governments, communities, parents, religious groups, and citizens to “speak up and defend the rights of the poor and needy.” (Proverbs 31:9) It is up to all of us to do all we can to protect the most vulnerable in our communities.

When children’s rights are protected, they stand a much better chance of growing up in a society that allows them to thrive.

At World Vision, we see children as agents of transformation. We partner with communities on citizen- and child-led projects to help them escape abuse, forced labor, and conflict. We work to equip and mobilize faith leaders and communities to challenge harmful norms and injustices against children. We help them to build a brighter future for themselves and their children.

We have a responsibility for the children who participate in our sponsorship and relief programs. We teach children about their rights, equipping them with the skills to speak up for themselves and educating their communities about what is and what isn’t acceptable behavior towards children.

We push for policy change at local, national, and global levels so we can impact the largest number of children possible with our work and program implementation.

World Vision initiatives and outcomes in child protection include:

World Vision staff in Australia contributed to this article.