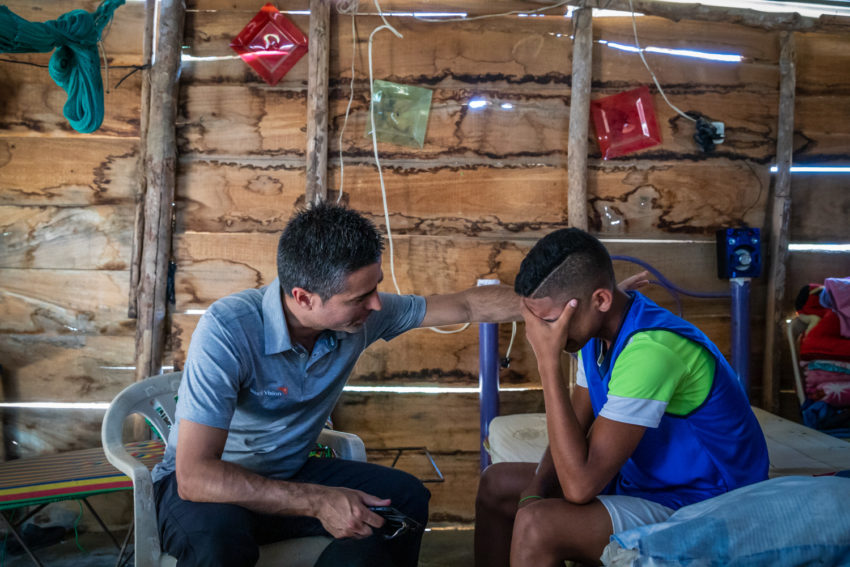 Armando Medina, 16, sits on the edge of a small bed in the one-room house he shares with his mother and siblings in El Talento, a place with hundreds of fragile, tarp-covered tin and wooden shelters near Colombia’s border with Venezuela. The conditions are far from ideal in this poor, dusty hillside community, and they provide nothing like the life most residents here once had in Venezuela. But they’ve settled for this because it’s better than sleeping on the streets.

Armando chokes up when he recounts how his family got to where they are today. He fled hunger and increasingly desperate conditions as his family’s sustenance crashed with the Venezuelan economy.

“I’ve given up the hope of going back,” Armando says. “I couldn’t leave my mom alone here in Cúcuta because I don’t have resources. I don’t have anybody.”

A crisis in Venezuela

Latin America’s largest migration in recent years is driven by hyperinflation, violence, and food and medicine shortages stemming from recent years of political turmoil. Once-eradicated diseases like cholera and malaria have returned, and children increasingly are dying of causes related to hunger and malnutrition.

Following an economic collapse, an uprising of political opposition to Venezuelan President Nicolas Maduro has put the country’s leadership in question. Armando is one of more than 4 million Venezuelans — 5,000 per day in 2018 — who have left the country seeking food, work, and a better life.

It wasn’t supposed to be like this. Once a land of economic opportunity and vast natural resources, Venezuela was considered the American Dream of South America.

But things got so bad that Armando and his family were skipping meals to make food last longer. When it became too difficult for his mom and stepdad to make ends meet, they finally hit a breaking point.

Armando’s stepfather left first to try and find work and a place to live. He then convinced Armando and his mother, Ingrid, to join him in Colombia, at least for a little while, to see if they could make it work.

“At first it was just supposed to be for vacation,” Armando says. But that has turned into two years of daily struggles.

Like so many of his peers now living here in Colombia, Armando had to leave behind his friends, extended family, and the home he loved. He also gave up his education, having studied only until the sixth grade when they moved.

They slept on the ground for the first month after they arrived and lived in another part of town before landing in El Talento. Ingrid has worked various temporary jobs but is currently unemployed. Armando and one of his brothers have worked selling fruit and water in the street. It’s not enough.

He shares that life is so hard that he battles depression at times. Much of his experience here has been embittered by xenophobia and discrimination, Armando says. He has often felt rejected and labeled a thief, just because he’s from Venezuela and doesn’t have money.

“Sometimes I feel that I’m worth less than others,” Armando says. “I don’t have the resources, so why am I going to spend it on studying. We need things at home. If we pay to study, we don’t have money for other things like water or gas to cook. It’s something that affects me.”

But that’s why he’s drawn to the World Vision Child-Friendly Space next to his house, as well as the workshops local staff put on for him and his peers in the neighborhood.

“The thing is, here, I haven’t been discriminated against,” he says. “Sometimes when we have nothing to eat, they (World Vision) show up [with food], and it’s like perfect timing. I really feel good there. And even though we’re Venezuelan, they always treat everyone equal. It makes me feel good and safe. They don’t look at my past. They don’t look at me like I’m a Venezuelan and I don’t have any money.”

The family has received monthly food vouchers, worth up to $77 at a local grocery store. And sometimes he gets a hot meal when the Child-Friendly Space is open next to his house. Child-Friendly Spaces help kids in emergency situations recover from the difficult experiences they’ve gone through in a safe environment.

Armando says his faith in Jesus, involvement with his church, and provision from World Vision give him hope to keep going. He wants to study law to become a lawyer so he can help people who can’t afford a lawyer. Right now, he’s taking courses to catch up and get the Colombian version of his GED high school equivalency certificate. Ingrid insists on paying for his studies, even when there’s no food in the house.

Sometimes, on the more difficult days, he loses hope since they don’t have much money, he says.

“But I know that God has great things for me,” Armando says. “I just need to keep up.” 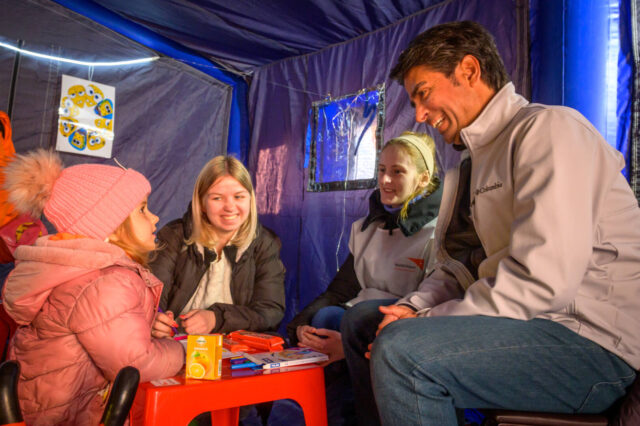