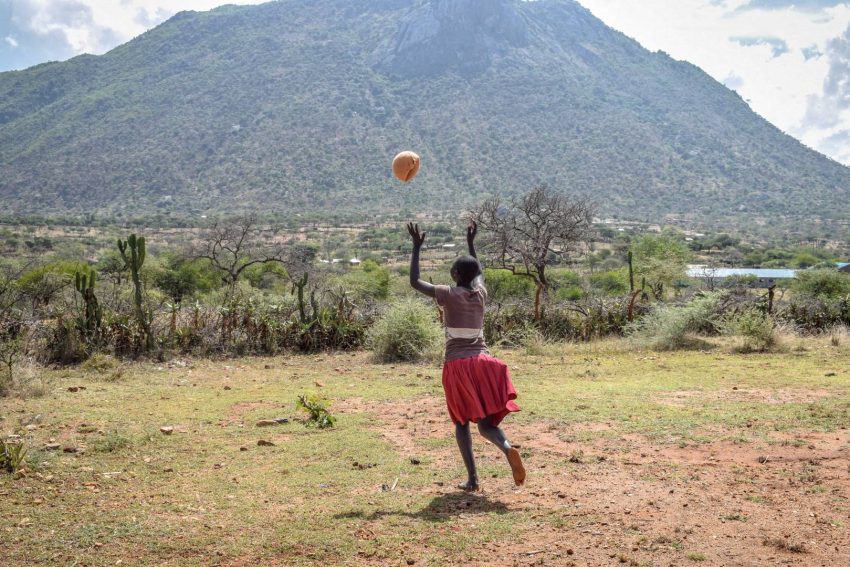 Mary plays with a ball outside the school where she attends classes and recovers from her child marriage. (©2018 World Vision/photo by Sarah Ooko)

As a child, Mary* loved going to school and yearned to rise out of the poverty she grew up in West Pokot County, Kenya. As one of eight children, she saw her parents struggle to provide, and her father’s alcoholism drove her family further into poverty. When she was 10, she and her younger brother John* dropped out of school to work at gold mines in neighboring Uganda to make money for their family.

“Life was so hard, and we were suffering so much,” Mary says. “I asked God what we had done for him to allow that.”

As her family’s poverty deepened, her father decided it was time for her to undergo female genital mutilation (FGM) and then marry. FGM is a common rite of passage for girls in Africa, the Middle East, and Asia; it indicates that they’re eligible for marriage. When Mary was 15, an elderly man offered Mary’s father a bride price of herds of cattle to marry her.

While she thought her parents respected her decision, soon after, as she was walking to gather water at a nearby stream, strange men abducted her and took her to the elderly man’s house. Her parents had accepted the bride price, and she says, “I was made a wife by force.” Mary describes that day as the worst and lowest moment in her life. Against her will, she consummated the marriage that night, and the man told her she would undergo FGM soon. She says, “I couldn’t believe that my dreams of having a good life were over. I was now going to go through the same life of suffering, poverty, and abuse that my mum had.

“I didn’t want to believe this was the end for me. I had to find a way out.”

Four days after she was abducted, she decided to take her chances and try to escape. While she walked with other women and girls to get water, she made her move.

“I asked them to go ahead as I tethered the donkeys that we normally used to carry water,” Mary says. “Then, when they were gone, I ran fast in the opposite direction and disappeared.

“I didn’t even know where I was going. My aim was to go far away from the place as fast as possible so no one could find me easily.”

The first night, she slept in a tree in the forest. The next three days she traveled, and good Samaritans sympathized with her, giving her food and accommodation. This kept her going. In the last home she stayed at, she learned about a local school founded by World Vision to provide refuge to children fleeing FGM and child marriage. The woman she met at the house promised to take her there but also seemed nervous to do so, so now that she had a destination in mind, Mary once again decided to leave and try her luck.

“I walked and stopped to ask people for directions along the way,” she says. “This time round, I was more hopeful as I knew where I was going.”

That evening she arrived at the school, and she says, “It was like a dream come true for me.”

Staff at the school welcomed Mary in. She was given food, clothes, and soap as well as a place to stay. She felt loved, supported, and encouraged by the staff, but most of all, she felt safe. Aside from having a safe home, Mary was also able to resume her education at the school with World Vision’s support. She’s now one of the top students in her class.

Beyond her basic education, she’s gotten the opportunity to explore other subjects and find hidden talents. In 2018, Mary even participating in the school’s choir that won the Kenya Music Festivals award. “I was so happy,” Mary says. “At home, there was no time to play or something enjoyable like singing since me and my brothers had to work all the time to provide for the family.”

Being at the school has also strengthened Mary’s faith in the Lord. She sees His hand of provision protecting her as she escaped and providing for her along the journey. She says, “That must have been God watching over all the time.” She also has learned how He loves and cares about her and always has — in both good times and bad.

“As I was suffering, I used to wonder where God was,” Mary says. “But now I know that He never left me. I want to encourage those going through problems to never give up.”

Through the school, Mary’s also gone through World Vision’s Alternative Rites of Passage training. It teaches about the adverse impacts of FGM, such as infections, severe bleeding, increased risk of HIV, and birth difficulties. Across Kenya, World Vision’s working in four ways to combat child marriage and FGM: empowering children, strengthening families, mobilizing faith leaders, and influencing governments. We’re also working with community leaders to educate and provide Alternative Rites of Passage ceremonies so children can still have a formal entrance into adulthood — without the harm caused by FGM.

Moses Chepkonga is the manager for World Vision’s Every Last One (ELO) child protection and education project in the area. He sees the challenges but also recognizes that attitudes are slowly changing. “West Pokot County is big, so as an organization, we don’t have sufficient resources to cover all areas,” he says. “But a lot of progress has been made where we are.” From 2012 through 2019, 2,573 girls participated in Alternative Rites of Passage rather than undergoing FGM, and a 2015 survey in West Pokot County indicated that more than nine in 10 people want the practice of FGM to end.

World Vision’s ELO work will play a large part in that. And the next generation of women will also be key to this cultural change. Mary now wants to be an anti-FGM advocate and says, “I want to help them (children) when I finish school so they can live happily.”