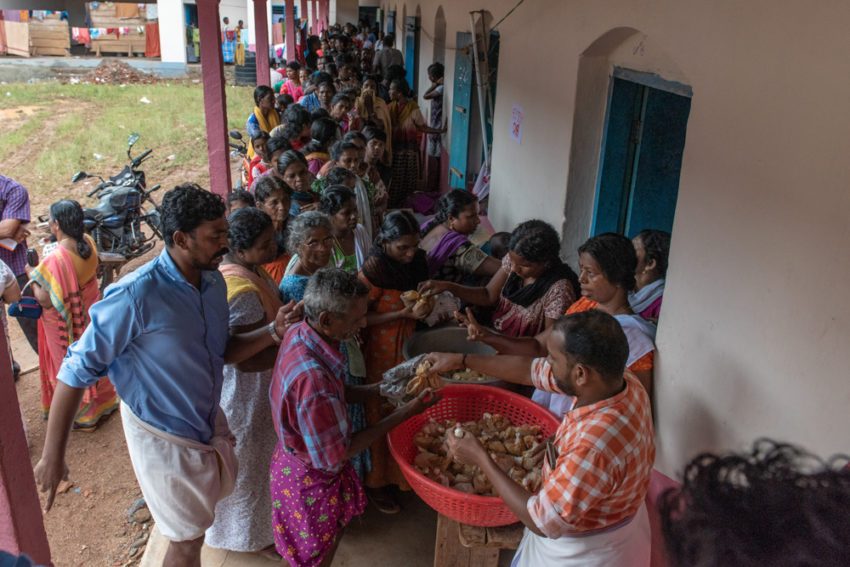 More than 450 families whose houses have been flooded are taking shelter in a secondary school in Pathanamthitta, Kerala. Representatives of each family stand in long lines to receive food. Heavy monsoon rains led to flooding, and now that dams have been opened every house in the community is submerged. (©2018 World Vision/photo by Theodore Sam)

The humanitarian world news briefs bring you a regularly updated selection of events and trends impacting people and the humanitarian community worldwide. This is an archive of what happened in 2018. Our topic-based FAQs are also a great way to stay up-to-date on a specific topic or issue.

Hurricane Lane brought heavy rains, wind, and high surf to the Hawaiian islands. The storm system caused catastrophic flooding after it dumped as much as 40 inches of rain in parts of the state. Landslides were also reported.

Lane approached the Big Island as a Category 4 hurricane but did not make landfall. By Saturday, Aug. 25, the storm was downgraded to a Category 2. Lane brought massive amounts of rain to densely populated Oahu, but turned sharply west and skirted the islands. By Monday, Aug. 27, the storm had weakened to a tropical storm and had blown into the open ocean more than 500 miles west of Honolulu.

Lane was briefly a Category 5 storm with sustained winds of more than 160 mph.

India’s southwest coastal state of Kerala has been hit hard by periods of extreme rainfall during July and August, leading to record-breaking 2018 India monsoon floods and landslides. More than 350 people have died and hundreds of thousands have been displaced in Kerala. Houses, schools, roads, and bridges have been lost to raging waters and mudslides during two episodes of extreme rain in July and August.

Earlier in the 2018 monsoon season, which runs from June to September, heavy rains and floods caused similar damage in other parts of the country, especially in northeast India. Plentiful monsoon rains are necessary for India’s mainly rain-fed agriculture, but damaging rains and landslides cause an economic burden to many rural Indians each year.

Even as the nation’s attention turns to Kerala, disaster response work continues in other parts of the country. World Vision is bringing relief goods to Kerala communities and is providing shelter assistance and cash for work programs to families affected by floods in Assam, Mizoram, and Manipur states.

With cash, you choose

Humanitarian organizations, including World Vision, are increasingly using e-cards—like debit cards—to provide aid to refugees and disaster survivors. In 2017, World Vision assisted 2 million people in 28 countries with cash-based aid. Cash equivalent cards are not only efficient and cost-effective, they give families more independence and choices. They also support local markets, creating a sustainable business model. In Lebanon, Syrian refugees can use the card for basic needs, including food, shelter, health, and hygiene. World Vision works with the World Food Programme to distribute e-cards to refugees, monitor shops that honor the cards, and handle refugees’ concerns.

Groups of farmers are going back to school in South Sudan and in many other countries where World Vision works. But instead of studying in classrooms, they are heading outside to Farmer Field Schools. New seed varieties and crop storage techniques are in the curriculum, but so is peacebuilding, nutrition, and gender- and child-protection training. With the help of World Vision facilitators, men and women test new ideas to produce more and better grain, vegetables, and fruit. At the same time, they learn to work together and support each other for the sake of their children and communities.

Reading camp is a popular Saturday morning activity for children in first through third grades in Nepal’s Sindhuli district. They show up bright and early in their school uniforms to enjoy songs, dances, art, and games that spark a love of learning and literacy. World Vision started the program in Nepal to help children who are still recovering from a devastating 2015 earthquake. “This excites young minds and captures their interest,” says teacher Bimala Ale Magar. Reading camps are a key component of World Vision’s Unlock Literacy initiative in many countries.

About 47% of Zambian women report having experienced physical, emotional, or sexual violence by an intimate partner. That’s one of the highest rates of gender-based violence in the world. But things are changing. World Vision is participating in a program to end gender-based violence that includes One-Stop Centers in health facilities where victims of abuse can see a doctor, a counselor, a legal advocate, and a police officer. Prevention is part of the project too, with outreach to young men through sports teams and to everyone through radio programs.