Bovet Tombola, a World Vision food assistance coordinator, speaks to a family at a food distribution in Kasai-Central. Their community was one of the first affected in the crisis. After a year of conflict, starting over is a real challenge for families. Many have planted corn, but it will be months before it will be ready to eat. (©2017 World Vision/photo by Kate Shaw)

World Vision staff and volunteers sing and dance with children at a Child-Friendly Space outside Kananga, in Kasai-Central, DRC. Many children in their village were in school when conflict broke out between militia and soldiers in May. The teachers panicked, sent the children home, and fled. Villagers hid for months on an island in a river nearby. Some children in the community have stopped speaking. (©2017 World Vision/photo by Kate Shaw)

Maria and her daughter Joelle wait for a food distribution. They fled a militia attack in March 2017. "They killed my two brothers at the forest at the border with Angola; they were 12 and 8," says Joelle. "They burned our house. The armed men killed people. That's why we fled." Formerly a nurse, Maria now lacks the documentation to return to work, and she can't afford to send her surviving children to school. (©2017 World Vision/photo by Kate Shaw) 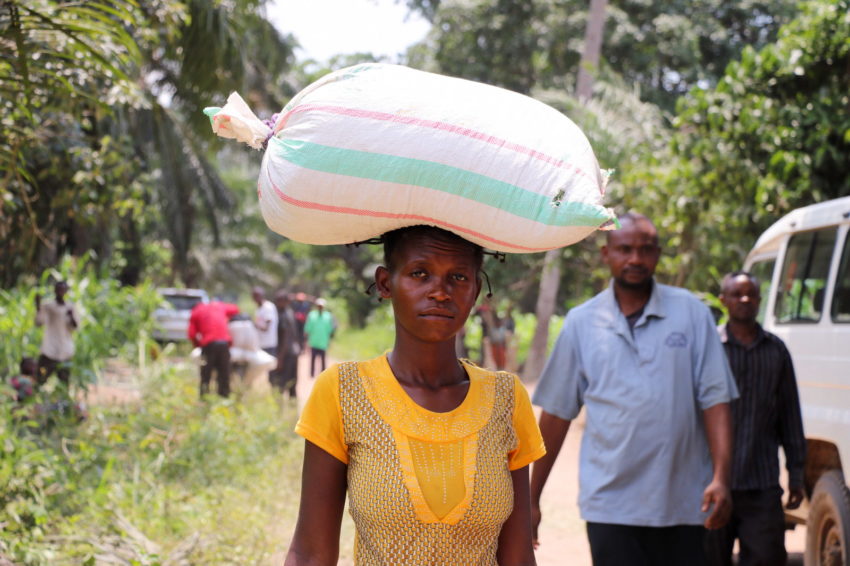 Marie, the mother of a 4-year-old, takes home food from a World Vision and World Food Program distribution. She says her family has only been eating once a day, often just cassava leaves with a bit of palm oil. Families receive corn flour, beans, oil, and salt, enough for an adequate diet for 30 days. (©2017 World Vision/photo by Kate Shaw) 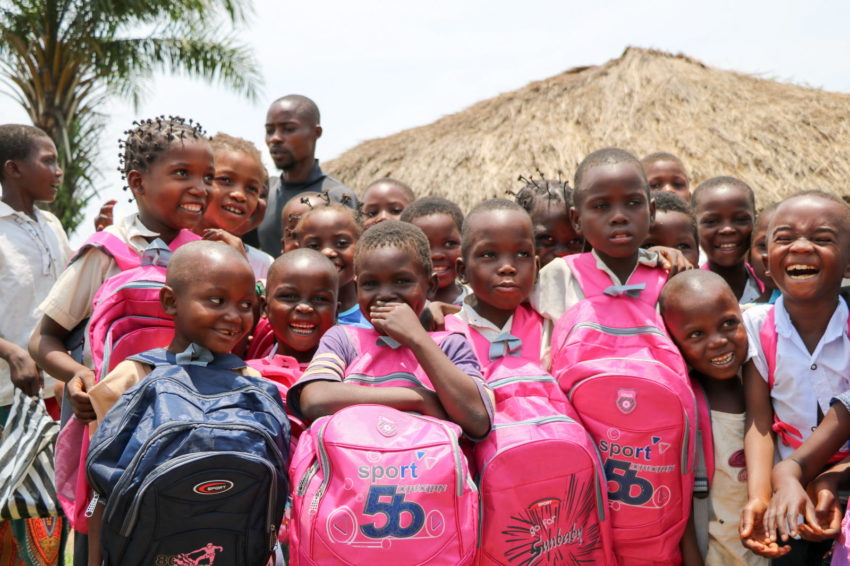 World Vision presented school bags to 15,124 children as part of a back-to-school campaign to encourage school registration for children who have returned home after fleeing to the bush. (©2017 World Vision/photo by Kate Shaw) 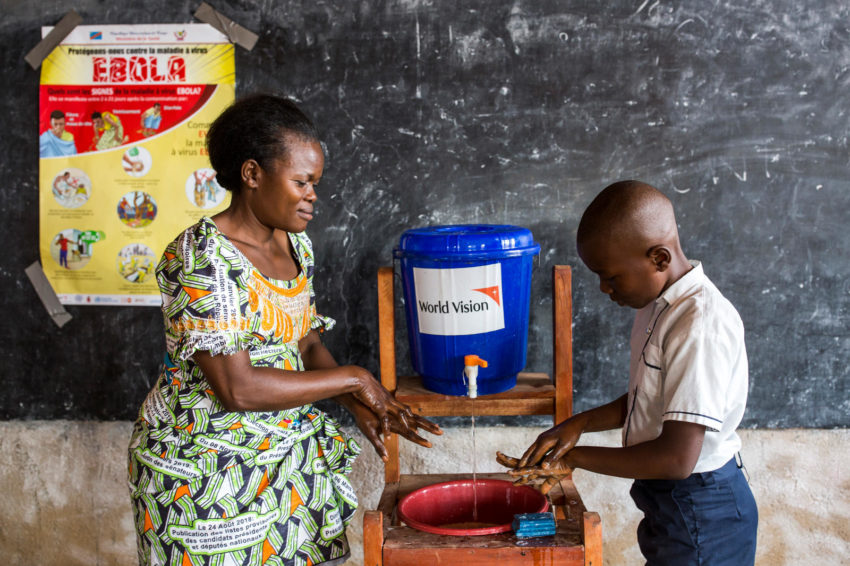 Teacher Françoise Mbambu teaches students about Ebola and how to wash their hands to prevent it. World Vision trained her and gave hand-washing kits to her school in Beni, DRC. (©2019 World Vision/photo by Patrick Meinhardt)

Priest Claude Mbakani, 33, and an imam talk about Ebola prevention and address listeners’ questions during a twice-weekly radio show supported by World Vision in Butembo, DRC. “I speak through the Bible, he speaks through the Quran. We each find a passage that delivers the message we want to, but in the end it’s the same message,” says Father Mbakani. (©2019 World Vision/photo by Patrick Meinhardt)

The Democratic Republic of the Congo (DRC), the second-largest country in Africa, has been mired in conflict for decades. A country of paradoxes, it is a land rich in natural resources, but its people are among the poorest in the world.

While the DRC has vast amounts of oil, diamonds, gold, and other natural resources, a majority of the population — about 64% — is considered extremely poor and lives on less than $1.90 a day, according to World Bank estimates.

The country is fraught with political instability, armed clashes, and human rights violations. Conflict erupted in 2016 in the Kasai region, which includes five provinces in the center of the country. It is yet another instance of fighting between the military and splintered ethnic militias. Nationally, 2.1 million people were newly displaced in 2017 and 2018, making the DRC the African country with the highest number of internally displaced people — 4.5 million. About 13 million people lack adequate food, including more than 1.3 million children under 5 affected by severe acute malnutrition.

Ebola alert — July 17, 2019: The World Health Organization has declared an Ebola outbreak in northeast DRC that began in August 2018 to be a public health emergency of international concern. WHO chief Tedros Adhanom Ghebreyesus called for countries to commit more resources to fight the disease. His announcement came three days after a case of Ebola was confirmed in Goma, the capital of Northern Kivu province, which is a transportation hub and home to 1 million people.

Ebola briefly broke out in May 2018 in northwestern DRC, then the deadly virus resurfaced in August in the northeast. This is the 10th outbreak of the deadly viral disease in the DRC since it was identified in the 1970s. Earlier outbreaks were quickly contained and didn’t spread beyond isolated rural communities.

Sponsoring a child in the DRC is a personal way to show God’s love to a child in need.

History of the DRC

The people of the DRC have endured more than two decades of civil war, and conflict has claimed as many as 6 million lives.

FAQs: What you need to know about conflict in the DRC

Explore facts and FAQs about the conflict in the Democratic Republic of the Congo, and learn how you can help affected children, families, and communities.

Fast facts: What is happening in the DRC?

How can I help people in the DRC?

Sponsor a child: Help World Vision continue to provide life-saving assistance to children and communities in the DRC.

Pray: Pray for children and families caught up in violence in the DRC.

How are conditions in the DRC affecting children?

Children are the main victims of violence, at risk of injury or death in combat, as many children have been recruited into armed groups as porters, combatants, or sex slaves. Children recently released from armed groups have expressed fear of returning home, saying they will not be accepted back into their families and communities.

In addition to food, shelter, and psychosocial support, children need opportunities for play and learning. In Kasai-Central province, 400 schools have been attacked and at least 260 were destroyed, depriving some 150,000 primary-school-age children of access to education.

Read what children in the Kasai region say about how violence has affected their lives in “Will you hear us? 100 children in DRC tell their story,” a World Vision report from 2018.

Because of poverty and displacement, many children throughout the country are forced to work rather than attend school. Working in mines is common among children in the DRC, and it’s one of the most dangerous forms of child labor.

What are the greatest needs of children and families in the DRC?

The greatest needs of children and families in the DRC are food aid and all aspects of child protection. Without reliable sources of food, families are cutting back consumption, and children are becoming malnourished. As many as 13 million people don’t have sufficient food. The U.N. children’s agency estimates that about 1.3 million children will suffer from severe acute malnutrition. This form of malnutrition means children are dying of hunger. With children vulnerable to violence and recruitment into armed groups, they need opportunities for education and strong support systems within their families and communities.

What is World Vision doing to help people in the DRC?

World Vision has provided relief and development programs in the Democratic Republic of the Congo since 1984. Today, we are operating in 14 of 26 provinces. Our child-focused programming in protection, health, nutrition, water and sanitation, food aid, food security, peacebuilding efforts, and emergency relief reached almost 2.5 million people in 2015. World Vision is the World Food Programme’s largest partner in the DRC, distributing food to nearly 1 million people.

Since World Vision’s response to the conflict in Kasai began in August 2017, our staff have reached more than 600,000 people with life-saving humanitarian assistance. That includes about 350,000 people who received food and cash, more than 60,000 young children and vulnerable adults in 126 health centers who received treatment or prevention consults for malnutrition, more than 30,000 children who benefited from Child-Friendly Spaces, and 29,000 students who benefited from classroom repairs, back-to-school kits, teacher training, and school-fee scholarships. Our response to the complex situation in the DRC continues in 2019.

Responding to the Ebola outbreak in the northeastern DRC, World Vision focuses on raising awareness about the disease. We train community leaders, teachers, health care workers and families on prevention and provide them with handwashing kits.

Through our Channels of Hope program, more than 138 faith leaders have formed action teams and staged public awareness events in their communities. Christian and Muslim faith leaders have reached about 222,000 people in their congregations with prevention messages and reliable information on seeking treatment.

Chris Huber of World Vision’s staff in the U.S. contributed to this article.