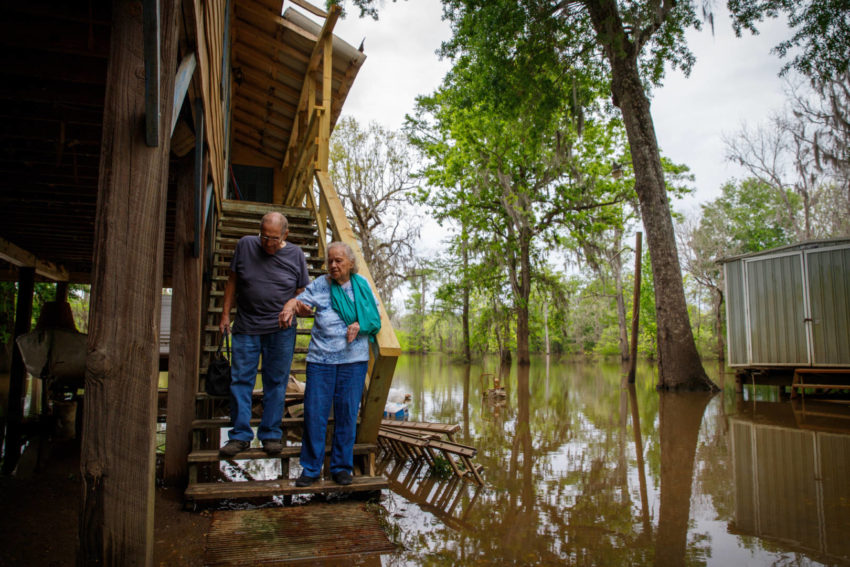 In April, John Harris helped his wife, LaDell, down the steps in front of their home along the shores of the Neches River near Vidor, Texas. She had slipped and hurt her arm while waiting days for floodwaters to clear from the porch steps. Their home was nearly destroyed by 15-foot floodwaters during Hurricane Harvey in August 2017. World Vision and its local partner, Wings of Promise led by Pastor Skipper Sauls, helped the couple rebuild with new appliances, Sheetrock, furniture, insulation, light fixtures, and other materials. John and LaDell were able to enjoy their cozy rebuilt riverside home together for a few more months in 2018 before John lost his fight with cancer in August. “During the storm, we were sitting here, helpless,” LaDell says. “These people (Pastor Sauls, and other community members) have been our angels.” (©2018 World Vision/photo by Chris Huber)

The humanitarian world news briefs bring you a regularly updated selection of events and trends impacting people and the humanitarian community worldwide. This is an archive of what happened in 2017; click here for our most recent news briefs. Our topic-based FAQs are also a great way to stay up-to-date on a specific topic or issue.

In 2017, World Vision responded to 170 disasters worldwide. Most notable:

Between July 17 and 28, World Vision partnered with seven other organizations, including CARE and Save the Children, to raise global awareness of the East Africa hunger crisis and fund response work in the region. The Global Emergency Response Coalition raised $3.7 million to battle famine.

Something to celebrate: In June, World Vision drilled its 1,500th borehole well since 2003 in Mali. World Vision began its water work in Mali in the late 1970s with digging freshwater wells.

Latest reports count more than 250 dead, 200 injured, and 200 missing after massive mudslides that devastated Mocoa, Colombia, in the southwest department of Putumayo overnight on March 31 and April 1.

Rapid rainfall of more than 5.5 inches in two hours caused steep riverbanks to collapse sending torrents of water and mud through the city. More rainfall is predicted for the next few days, which could hinder responders and increase the threat of further landslides.  World Vision staff in Colombia are concerned for the safety and recovery of children who may have lost family members, homes, and schools in the disaster. The organization has sent a team of emergency workers to plan and coordinate a response.

World Vision will likely address the need for clean water, hygiene, and support for children’s protection, psychosocial health, and return to education.

Cyclone Mora triggers a series of landslides in Bangladesh

In one of the country’s worst natural disasters in recent years, Cyclone Mora’s heavy rains triggered a series of landslides in southeastern Bangladesh, including one area where World Vision works. At least 130 people were killed and half a million were displaced. Our staff did an initial assessment of the damage and provided food and water to displaced families at a World Vision-run emergency shelter.

Philippines: Violence on the island of Mindanao

World Vision began its relief operations after more than 200,000 people were forced to flee violence in the city of Marawion on the island of Mindanao. At least 1,000 displaced families have taken shelter in evacuation centers and relatives’ homes, and World Vision is providing them with hygiene kits and items like blankets and mosquito nets.

More than 75 people have died and 100,000 were driven from their homes after weeks of heavy rain triggered widespread flooding and mudslides up and down the coast of Peru.

The strongest rains in decades have affected almost 650,000 people countrywide and hit the northern region particularly hard. Thousands of buildings are damaged or destroyed, including more than 1,200 miles of roads and 175 bridges.

This video of a woman miraculously escaping from a flowing river of mud and debris shows the magnitude of the disaster near Lima.

World Vision is responding to needs in Piura, Lambayeque, La Libertad, Ancash, and Lima. Staff on the ground are providing affected families with food, hygiene kits, clothing, and supplies for temporary shelter. We are also setting up Child-Friendly Spaces, which give children a place to play, do homework, or receive counseling support.

More than 1,800 children registered in World Vision’s sponsorship program in La Libertad and Ancash are affected, according to our latest reports. Some of them lost their homes.

In other humanitarian world news

Reported trafficking cases up in U.S.

A U.S. hotline to help trafficking survivors saw a 24% increase in cases reported in 2016, compared with 2015, the Thomson Reuters Foundation reported Jan. 31. Last year, the National Human Trafficking Hotline received 7,572 reports of people being trafficked for sex or forced labor. The hotline saw not only a large increase in cases reported, but also noted new types of abuse. Some people were forced to sell magazines, vacuums, or cleaning products door-to-door or defraud people of social security benefits by stealing identities. Set up in 2007, the hotline operates 24 hours a day in multiple languages.

Kenya’s high court ruled Feb. 9 that the government’s 2016 decision to close the world’s largest refugee camp in Dadaab goes against the country’s constitution, the BBC reported. The directive had set in motion an effort to repatriate about 260,000 Somali refugees living in the camp by May. Government officials said they would appeal the ruling because they remain concerned about security issues they say stemmed from extremist activities in the camp.

About 69,000 people have left the camp since the government announced plans to close Dadaab at the end of May. Still, about 257,000 people remain in Dadaab. Established in 1991 to host Somali families fleeing conflict, Dadaab is located near Kenya’s border with southern Somalia. World Vision has long provided various services in Dadaab camp and throughout Kenya and Somalia.

As a result of a peace deal between the FARC rebel group and the Colombian government, the rebels will release all remaining child soldiers. The transfer will happen as thousands of rebel fighters turn in their weapons at designated sites. Colombia’s child welfare agency says nearly 3,700 children were recruited into FARC ranks since 1999. The government estimates that about 170 underage combatants remain. For its part, the government has pledged to counsel and support former soldiers to help them reintegrate into civilian life.

Scientists at a Kenyan university have invented a mobile app to help farmers deal with increasingly frequent drought and unpredictable rainfall, the Thomson Reuters Foundation reported Jan. 24. The app monitors a field’s need for water and controls irrigation equipment to deliver appropriate amounts of water. It also alerts the owner when there’s a problem. The system consists of the phone app, a water-flow control unit, solar panels, and two drip irrigation lines. Costing about $480 to set up on a quarter-acre, it’s not exactly cheap for many small-scale farmers. The system costs about $48 to install on every additional quarter-acre. But it has proven to drastically reduce drought-related crop losses and save farmers money.

A person in Malawi pays about 100 times as much on a bowl of bean stew than a person in Davos, Switzerland, suggests new research from the World Food Programme. The findings, presented during the World Economic Forum in Davos this month, highlight the growing disparity between wealthy and developing nations. Factoring in average daily income and cost of food, people in Malawi spend about 41% of their daily income for a bowl of beans — less than $1 — and the Swiss spend about .41% of their daily income on the same meal. The WFP study, “Hot Dinner Data,” showed that in especially fragile contexts like war-torn Syria, a bowl of beans could cost more than a person’s average daily income. While more affordable in places like India or Nicaragua, the same meal could still cost 10 to 15 times what it does in Switzerland.

New head of U.N. plans surge in diplomacy for peace

On his first day as the United Nations’ new secretary general, Jan. 1, former Portuguese prime minister António Guterres called on member nations to make 2017 “a year for peace.”  Also high on the new leader’s agenda for his five-year term is sustainable development and reform of the U.N. bureaucracy to make it more decentralized and flexible. Guterres led the U.N.’s refugee agency from 2005 to 2015.

Police in Hyderabad rescued 200 underage workers from bangle factories earlier this month in a national sweep to end child trafficking and find missing children. Most of the children making bracelets were between ages 8 and 14 and were trafficked from poverty-stricken northern states.

Since 2015, 2,000 children have been freed from labor in Hyderabad. The children stay in shelters until they can return to their homes. The International Labor Organization estimated in 2015 that 5.7 million children ages 5 to 17 were in the labor force in India.

There are an estimated 168 million child workers around the world. In Indian communities where World Vision works, child protection units trained by World Vision intervene to prevent trafficking, exploitation, and child marriage. World Vision trained more than 200,000 children in child rights in 2015.

At least 76 people were killed and more than 100 injured Jan. 17 when Nigerian Air Force planes accidentally bombed a refugee camp near Nigeria’s border with Cameroon, Reuters reported. The casualties included people displaced by ongoing attacks by extremist groups, as well as aid workers. The mistaken strike followed Nigeria’s weeks-long military offensive against extremists in the region. Years of violence have displaced 2.2 million people in the Lake Chad region — Niger, Nigeria, Cameroon, and Chad — and triggered what has become one of the worst humanitarian crises in the world right now.

An unprecedented 623,000 Afghans were forcibly displaced from their homes in 2016, according to the United Nations Office for the Coordination of Humanitarian Affairs. The huge increase came as fighting intensified throughout the country between extremist groups.

Three times as many people were displaced in 2016 than 2014, which has led officials to say the country is in a state of ‘continual emergency.’ And about 8,400 civilians were killed or injured last year. Further straining the dire humanitarian situation in 2016, more than 600,000 Afghan refugees were forced back home from neighboring Pakistan and Iran.

The U.N. predicts conflict will displace another 450,000 Afghans in 2017, IRIN News reported Jan. 10. World Vision began work in Afghanistan in 2001 and has trained hundreds of doctors, nurses, and midwives to improve healthcare services in communities struggling with poor maternal and child health.

The number of Salvadorans murdered in 2016 fell by 20% compared with the year before. Gang violence has plagued El Salvador for years. In 2015 the Central American country was considered the murder capital of the world, with a homicide rate of 104 per 100,000 residents. The rate dropped to 81.7 per 100,000 in 2016, Reuters reported Jan. 2. The national police said new efforts to fight street gangs helped avoid 1,378 deaths, bringing the 2016 homicide total to 5,278. World Vision has worked with communities in El Salvador for more than 40 years.

Chris Huber and Kathryn Reid of World Vision’s staff in the U.S. contributed to this article.