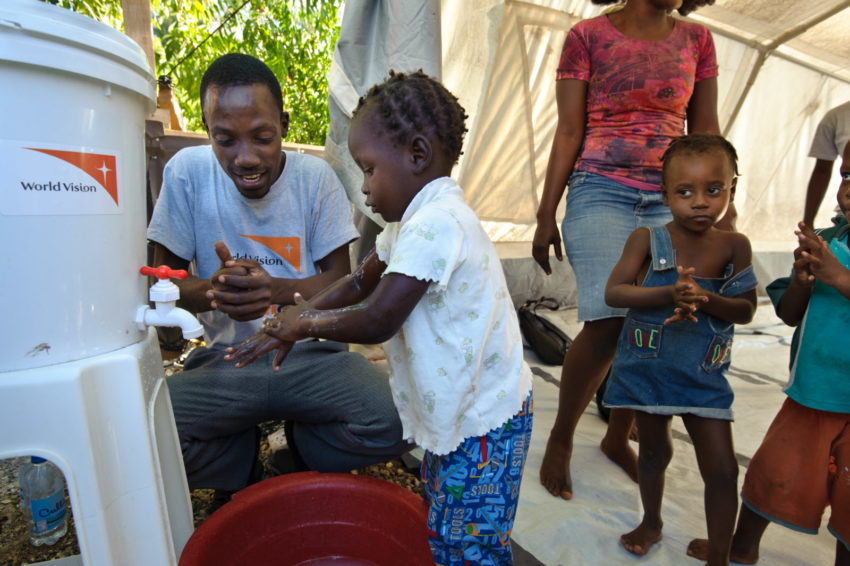 After the 2010 Haiti earthquake, children in a World Vision Child-Friendly Space and early childhood center learned about cholera and practiced handwashing to avoid contracting the disease. (©2010 World Vision/photo by Jon Warren) 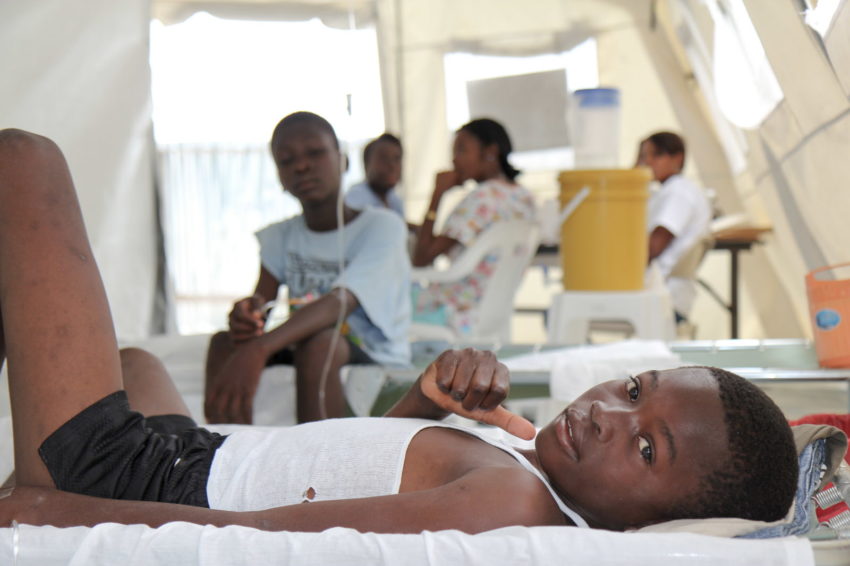 Twelve-year-old Gonzales is treated in a World Vision cholera treatment unit near two camps in Port-au-Prince for people displaced by the 2010 Haiti earthquake. “I got a headache first, then a bellyache, then diarrhea,” he says. “My mum made me come because she was worried.” (©2011 World Vision/photo by Meg Sattler)

Cholera is an intestinal infection caused by bacteria. The disease is often contracted from drinking unclean water. Each year, 1.3 million to 4 million people around the world suffer from cholera and 21,000 to 143,000 people die of the disease, according to the World Health Organization (WHO).

Most people who contract cholera show no symptoms, but in some cases, severe diarrhea, dehydration, and death occur within hours of onset.

Cholera is a high risk in sub-Saharan Africa where clean water and sanitation are often lacking. The disease crops up in other parts of the world when conflict or natural disasters damage water systems and displace families.

The long-term solution to the global scourge of cholera is providing access to clean water and sanitation.

FAQs: What you need to know about cholera

Explore frequently asked questions and facts about cholera, and learn how you can help children and families at risk of the disease.

Cholera is an intestinal disease caused by Vibrio cholerae bacteria. Most people get it from contaminated water or food. Cholera may cause extreme diarrhea, which can lead to dehydration and even death.

What are the symptoms of cholera?

Cholera symptoms include diarrhea, vomiting, and leg cramps. Untreated, these conditions may lead to rapid dehydration, septic shock, kidney failure, and death within hours. Children with cholera may also experience drowsiness, fever, and convulsions. About 10% of those who contract the disease have severe symptoms.

About 80% of people infected by the cholera bacteria have no symptoms, and their disease runs its course without treatment. However, without proper waste disposal, the bacteria passed through their bodies can infect others.

Where is cholera found?

Cholera occurs primarily in Africa and in South and Southeast Asia, most often in tropical regions. In about 50 countries where the disease occurs regularly, it is said to be endemic. In these cholera-endemic countries, outbreaks often occur in the rainy season when drinking water may become contaminated through flooding. Since the 2010 cholera epidemic in Haiti, cholera has become endemic there.

What is the difference between cholera, acute watery diarrhea, and dysentery?

Cholera is a form of acute watery diarrhea caused by a specific strain of bacteria, Vibrio cholerae. Acute watery diarrhea is most often a symptom of an intestinal infection, which can be caused by different bacteria, viruses, or parasites. The term dysentery describes an inflammation of the gastrointestinal tract that causes bloody diarrhea. Any of several bacteria or amoebas cause dysentery. Common strains of the cholera bacteria do not cause bloody diarrhea.

What is the difference between an epidemic, outbreak, and pandemic?

When even one case of cholera is diagnosed in a new location and determined to be locally transmitted, it is an outbreak. When cholera spreads rapidly to many people, that is an epidemic. A pandemic occurs when it spreads globally.

Is clean water really the only way to prevent cholera?

Yes, the only sure way to prevent cholera is by using clean water for drinking and cooking, washing hands frequently with soap and water, and using a latrine for sanitation. But globally, 844 million people lack access to clean water. Ending Cholera: The Global Roadmap to 2030, a plan to reduce cholera deaths by 90%, prioritizes reaching people most in need with clean water and sanitation.

Is there a cholera vaccine?

A single-dose oral vaccine has been approved by the U.S. Food and Drug Administration for adults who are traveling to areas where cholera is spreading. Even with the vaccine, it is important to avoid exposure to cholera bacteria through good hygiene practices.

Why is cholera dangerous for infants and young children?

Children can become dehydrated rapidly by the vomiting and diarrhea associated with cholera. In places where cholera is endemic — local, regular transmission — young children lack the immunity that adults may have developed over time. Also, children who are weakened by malnutrition are more susceptible to a cholera infection.

How can I help people at risk of cholera?

Help bring clean water and sanitation to communities and families around the world as a World Vision supporter. Over the last three years, we reached more than 12.7 million people with clean water. Our goals for the future are even more ambitious, but achievable, with your help.

What is World Vision doing to end the global water crisis?

World Vision is the leading nongovernmental provider of clean drinking water in the developing world. We are reaching one new person every 10 seconds and three more schools every day with clean water.

World Vision focuses on bringing water to people living in poverty in rural areas with the greatest disease burden. We invest an average of 15 years in a community, cultivating local ownership and training people to manage and maintain water points. In this way, we save lives and ensure good health for millions of people annually. Our efforts include:

400 BC — Greek physician Hippocrates describes a diarrheal disease like cholera.

1817 to 1823 — In the first known cholera pandemic, an outbreak engulfing a large region, the disease spreads from the Ganges River delta to the rest of India. The disease is thought to have originated in the Ganges Valley, where it has been known there since antiquity.  Through trade and colonization, the outbreak spreads to Southeast Asia, Central Asia, the Middle East, East Africa, and coastal Mediterranean regions.

1829 to 1851 — The second cholera pandemic spreads from India as far as Europe and the Americas.

1863 to 1923 — The third, fourth, fifth, and sixth pandemics also originate and spread from India, each with a slightly different strain of the bacteria.

1883 — Robert Koch identifies Vibrio cholerae as the cause of cholera in an Egyptian outbreak, contributing to the modern understanding of infectious diseases.

1961 — The seventh cholera pandemic starts and spreads from Indonesia. It continues to cause devastating losses in Africa.

1979 — Oral rehydration therapy is introduced as a standard treatment for cholera.

2010 — Because of poor sanitation after the Haiti earthquake, a cholera outbreak that starts in the fall of 2010 spreads rapidly through displacement camps. Haitian health officials reported in October 2018 that cholera infected more than 819,000 people and killed nearly 10,000 since the outbreak began. About 3,400 new cases are reported at the end of 2018.

2016 — Yemen experiences the worst outbreak in history, affecting more than 1 million people; it is still ongoing as of March 2019. The U.N. estimates that 16 million people of Yemen’s 29 million people lack safe water and adequate sanitation.

2017 — The Global Task Force on Cholera Control, led by the World Health Organization, outlines a plan to interrupt the spread of cholera and reduce deaths by 90% by 2030.

April 2019 — In Mozambique, cholera is spreading rapidly among populations displaced by Cyclone Idai in March. A massive vaccination campaign has begun.