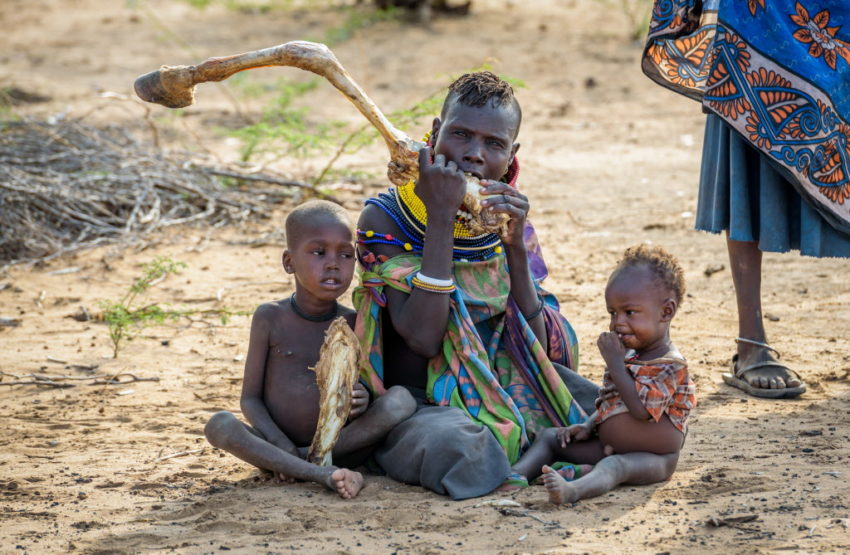 Akure (center), 31, and her children try to eat the marrow from a donkey bone in Turkana county, northern Kenya. Many in their village are going hungry since the river dried up, their animals died, and food became scarce. (©2017 World Vision/photo by Jon Warren)

From monster storms and flooding to civil wars and droughts, major disasters impact children, their families and economies around the world each year.

“Our donors in the United States responded generously to the major disasters this year,” says Lawren Sinnema, a senior program manager with World Vision, although funding gaps remain for some of the worst crises. “The world’s attention can shift easily once a new disaster strikes, but it’s important that we not forget the long-running crises, particularly in Syria and East Africa, that are affecting millions of children.”

Learn about five of the worst disasters in 2017 and how World Vision is helping people hardest hit this year.

Millions of people in East Africa are experiencing chronic hunger and the threat of famine. Conflict, recurring severe drought, and high food prices are to blame. People are dying of starvation.

In South Sudan, Kenya, Ethiopia, and Somalia alone, 28 million people need humanitarian assistance. About 6.9 million children are suffering from malnutrition, including more than 1 million who are severely malnourished or risk dying by the end of 2017.

World Vision has scaled up relief efforts in Kenya, Ethiopia, Somalia, and South Sudan to reach up to 2.2 million people with life-saving food, clean water and sanitation services, medical assistance, and livelihood skills training. Here are some highlights from our response so far:

Now more than six years into the Syria civil war, the Syrian refugee crisis is internationally recognized as the largest refugee and displacement crisis of our time. The war has set back the national standard of living by decades — now that healthcare facilities, schools, and water and sanitation systems have been damaged or destroyed.

Since the civil war began in 2011, World Vision has helped more than 2 million people with healthcare, water, sanitation, and hygiene, psychosocial support to women and children, supplies for cold winter months, education programs, and food aid.

More than 600,000 people have fled their homes in western Myanmar’s Rakhine state to Bangladesh since late August 2017 because of renewed fighting between inter-communal groups, minority groups, and government military forces. As many as 2,000 people cross the border from Myanmar into Bangladesh daily, according to the United Nations Children’s Fund. This is one of the fastest-growing humanitarian crises in the world in 2017.

The humanitarian situation continues to worsen with an increased risk of disease in refugee settlements. Decades of tension and unrest in remote areas of Myanmar have also displaced hundreds of thousands more people within the country.

As of Nov. 15, World Vision staff in Bangladesh have provided emergency food relief to 135,250 people, distributed 5,000 tarps and 100 tents, and opened Child-Friendly Spaces for 1,400 children. Our six-month response plan in Bangladesh includes:

The 2017 hurricane season in the Caribbean and Atlantic regions has been one of historic proportions, bringing some of the strongest and wettest storms on record in hurricanes Harvey, Irma, and Maria.

Puerto Rico is devastated and struggling to recover after Hurricane Maria, the strongest storm to hit in more than 80 years, pummeled the island territory Sept. 20. Almost two months on, most of the island is still without power. Some assessments indicate it may take six to nine months to fully restore power. In the meantime, families are struggling to maintain food and water supplies while hospitals, businesses, and schools are trying to repair damages so they can reopen. Puerto Rican authorities estimate there was $45 billion to $95 billion in damages to the power grid and other infrastructure. Many other Caribbean islands fared as badly or worse after Irma and Maria.

Houston and other cities in the southern U.S. are still recovering from Hurricanes Harvey and Irma too. After making landfall Aug. 25, Harvey dumped about 50 inches of rain on the Houston area, flooding many neighborhoods that had historically been unscathed by floodwaters. Irma hit Florida as a Category 4 storm the morning of Sept. 10, ripping off roofs, flooding coastal cities, and knocking out power to more than 6.8 million people.

“More than ever, it’s important that we not only respond to immediate needs but invest more in disaster risk reduction to prepare for future hurricanes,” Lawren says. “The U.S. coast is vulnerable and we must build back better.”

World Vision responded to all three disasters, sending dozens of semi truckloads of relief and rebuilding supplies to communities in the Houston area; Immokalee, Florida; and various sites in Puerto Rico to help some of the worst-affected storm survivors.

In the two months after Irma, we provided assistance to almost 20,000 people in Florida, in the form of food, water, hygiene kits, and other household items.

More than 70 semi truckloads of supplies were distributed to Houston-area residents in the first 90 days after Hurricane Harvey. That’s enough to serve more than 99,000 people with emergency relief supplies, school supplies, tents, sleeping bags, dehumidifiers, blankets, and other necessities. Thanks to a generous church partner, World Vision opened a warehouse in Houston to provide supplies to sustain recovery efforts for the foreseeable future.

Democratic Republic of the Congo refugees and violence

Democratic Republic of the Congo (DRC) is rich in minerals and other natural resources, yet according to the most recent estimates, 77% of the population is extremely poor, living on less than $1.90 a day. Due to many years of political instability, armed conflict, and human rights violations, DRC ranks near the bottom of the world’s human development index and its per capita income is among the world’s lowest.

The people of the DRC have endured more than two decades of civil war and conflict, which has claimed as many as 6 million lives. More than 2.5 million people in Kasai, Tanganyika, and South Kivu were displaced in 2017.

World Vision operates in 14 out of 26 provinces in the DRC. We scaled up our response in 2017 to address increasing needs. Initial interventions focus on food and child protection. Our staff on the ground reached 100,000 people with emergency food relief and plan to reach 146,000 by December 2017. World Vision has delivered relief, rehabilitation, and development programs to conflict, disaster-affected, and poverty-stricken people in the DRC since 1984.

Chris Huber and Kathryn Reid of World Vision’s staff in the U.S. contributed to this article.

When disaster strikes, World Vision is there. Help vulnerable families as they recover and rebuild.