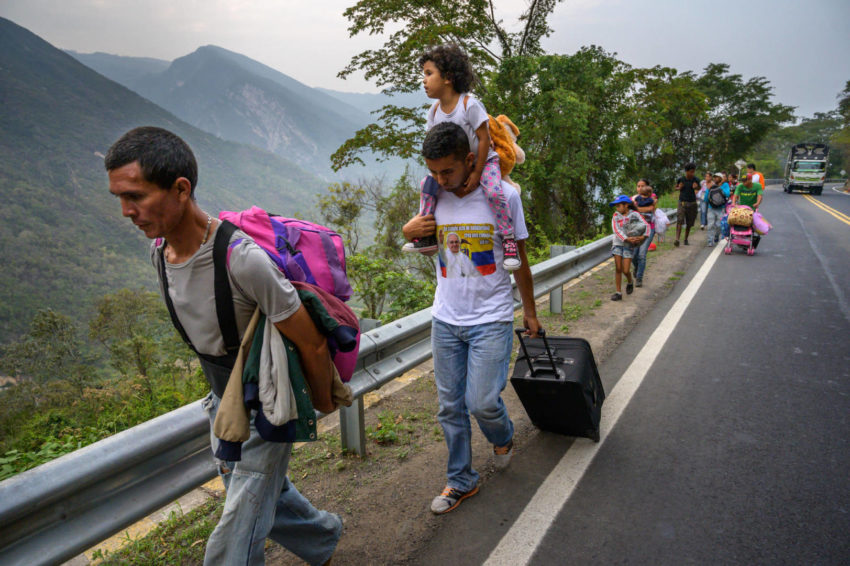 A group of about 10 Venezuelan migrants walk together for safety. Some have been on the road for 18 days; others recently joined. Two of the children are younger than 6 months old. (©2019 World Vision/photo by Jon Warren)

From monster storms and flooding to civil wars and economic collapse, natural disasters and man-made crises impact children, their families, and nations around the world each year.

“In 2019, the sheer scale of humanitarian need around the world was immense and growing,” says Lawren Sinnema, a program manager for World Vision. “The news cycle is so overwhelming that many people don’t learn about the worst crises happening around the world.”

But we believe there is hope. Jesus said, “With God all things are possible” (Matthew 19:26, NIV), and we at World Vision believe miracles happen in people’s lives despite their seemingly impossible circumstances.

As these six of the worst disasters in 2019 show us, children and families around the world have experienced tremendous pain and suffering this past year.

“It’s overwhelming. One reaction would be to throw our hands up,” Lawren says. “But as Christians, we can’t abandon children.”

But hope has not been snuffed out.

Learn about six of the worst disasters in 2019 and how World Vision staff are representing the Lord as the hands and feet of Jesus to help people affected.

The Syrian refugee crisis is internationally recognized as the largest refugee and displacement crisis of our time. Hundreds of thousands of people have died. The civil war has set back the national standard of living by decades — now that healthcare facilities, schools, and water and sanitation systems have been damaged or destroyed. Right now, about 13.1 million people inside the country — almost three-quarters of the population — need humanitarian assistance. Half of the people affected are children.

An increase in conflict in the first half of 2019 led to the displacement of more than 800,000 people inside Syria, and then military operations in northern Syria displaced another 200,000 people in October. In total, about 6.2 million Syrians are displaced within the country. As of November 7, the total number of refugees outside the country sits at about 5.7 million, according to the United Nations Refugee Agency (UNHCR). Those two figures amount to about 55% of Syria’s pre-war population.

“World Vision is on the ground in some of the world’s hardest places,” Lawren says. “Even though humanitarian work is becoming riskier and more complex, we can’t retreat.”

It’s a bleak picture, but aid groups and compassionate governments, humanitarian groups, and donors continue to give the Syrian people reasons to hope.

Since the in 2011, World Vision has helped more than 2.5 million people in the region with healthcare, psychosocial support to women and children, supplies for cold winter months, education programs, food aid, and clean water, sanitation, and hygiene.

You can bring help and hope to refugees from Syria and other crises around the world by donating to the refugee children’s crisis fund.

Four years of civil war and the resulting food crisis in Yemen has created a massive humanitarian emergency. More than 22 million people — three-quarters of the country’s population — need humanitarian assistance.

In Yemen, the economy has collapsed, and food prices have soared. Conflict has killed more than 230,000 people, including 12,000 civilians, and displaced more than 3 million. In the past year, 380,000 people contracted cholera (watery diarrhea) because half of the population lacks regular access to safe water and basic hygiene. People in the worst-affected areas have been starving to death because of near-famine conditions. And 1.8 million children are suffering from malnutrition, including 400,000 on the very edge of life.

The volatile security situation has made it extremely difficult for humanitarian agencies to get aid into the country. But in November, World Vision began working with the United Nations and other agencies already in Yemen to support efforts to protect and care for children overcome by this crisis. Our work is focused on rehabilitating water points to provide safe drinking water for 17,500 people. We plan to scale up our work through local and U.N. partner organizations in 2020 so children can return to health and families can grow food to feed themselves.

The number of people leaving Venezuela amid a national economic crisis reached 4.5 million in 2019. As many as 3,000 people per day are crossing the border into Colombia. The exodus is driven by hyperinflation, violence, and food and medicine shortages stemming from recent years of political turmoil. About 1.5 million people have settled in Colombia, more than 860,000 in Peru, about 385,000 in Ecuador, 370,000 in Chile, 224,000 in Brazil, and 145,000 in Argentina. About 7 million people within Venezuela need humanitarian assistance, according to the UNHCR.

World Vision staff in countries throughout the Andean region began working in 2018 to address the needs of Venezuelan refugees. So far, we have helped more than 174,000 people caught up in this crisis. In Colombia, we have helped about 20,000 people with health, food, economic empowerment, and educational programming. In Ecuador, we have provided hygiene kits and workshops in child protection and economic empowerment. Our staff in Peru are working to help tens of thousands of Venezuelans with similar programs to those in Colombia plus prepaid cash cards to help them cover basic needs. And in Brazil, our staff are working to provide Child-Friendly Spaces and help facilitate Venezuelans who are registering for documentation.

Cyclone Idai made landfall over Mozambique on March 14 as a Category 2 storm. Its heavy rains and strong winds led to flash flooding, hundreds of deaths, and massive destruction of property and crops. Less than six weeks later, on April 25, Cyclone Kenneth dealt a hard blow to northern Mozambique about 600 miles north of Idai’s impact zone.

Idai and Kenneth were two of the top five worst storms to ever hit Mozambique. Together, they killed more than 1,000 people and caused an unprecedented amount of damage. Catastrophic flooding from the two storms affected close to 2.2 million people in Mozambique, Zimbabwe, and Malawi.

Cyclones Idai and Kenneth hitting in March and April, near harvest time, contributed to a food crisis in Mozambique and the broader region. Successive crop failures and poor harvests in Zambia, Zimbabwe, Mozambique, and Angola also took a toll on agriculture production in 2019, causing food prices to soar. And in the past three growing seasons, parts of Southern Africa experienced their lowest rainfall since 1981.

As a result, 41 million people in Southern Africa are food insecure, and 9 million people in the region need immediate food assistance. That number is expected to rise to 12 million as farmers and pastoralists struggle to make ends meet during the lean season, October through March, before the next harvest is expected.

World Vision mounted a disaster response in Mozambique, Malawi, and Zimbabwe, where we have operated for years. Our initial focus has been on food and nutrition, water and sanitation, household goods, shelter assistance, health, child protection, and education. Here are some examples of how we have helped families affected: More than 8,000 boys and girls have participated in Child-Friendly Spaces in Mozambique; about 15,000 households received cash assistance and 3,500 received seeds, fertilizer, and farm tools in Malawi; and more than 50,000 people have received food assistance in Zimbabwe.

Democratic Republic of the Congo conflict and Ebola outbreak

Decades of war and conflict in the Democratic Republic of the Congo have resulted in one of the world’s largest and most complex humanitarian crises. Ebola broke out in May 2018 in the country’s northwest, and it resurfaced in August in the northeast. In July 2019, the World Health Organization declared the Ebola virus outbreak in the Democratic Republic of the Congo a public health emergency of international concern, marking a sobering low point in the battle to contain the deadly disease.

As of November 12, the World Health Organization reported 3,291 cases of Ebola, including 2,193 people who have died, since the latest outbreak was declared August 1, 2018. The deterioration in stability since 2017 has not only displaced more than 2.1 million people but also has severely impacted the healthcare community’s ability to respond and prevent its spread.

Since the latest Ebola outbreak began, World Vision has worked with faith leaders to reach hundreds of thousands of people with messages and training on how to identify and prevent Ebola. Our staff also have trained teachers and community health workers to prevent the spread of the disease and distributed more than 12,400 hygiene kits.

Sponsoring a child in the DRC is a personal way you can show God’s love to a child in need.

Since Aug. 25, 2017, more than 740,000 people from Myanmar have fled to Bangladesh because of extreme violence in the northern part of Rakhine State on the country’s western Bay of Bengal coast. Most of the refugees identify as Rohingya, a Muslim minority ethnic group in predominantly Buddhist Myanmar. Flooding into camps near the town of Cox’s Bazar, they joined more than 200,000 people who fled to Bangladesh years earlier. About 55% of Rohingya refugees are children.

Many refugees brought little with them and are dependent on humanitarian aid for shelter, food, clothing, and healthcare. During the monsoon season from April to November, they face floods and landslides in flimsy shelters, which make poor conditions even worse. In 2019, monsoon rains inundated many of the camps situated among the hills of Cox’s Bazar, contributing to difficult, precarious, and unsanitary living conditions.

Aid agencies are working together to provide life-saving support to millions of people affected, including Bangladeshis living in host communities. Between October 2018 and September 2019, generous donors and World Vision staff in Bangladesh were able to help more than 371,000 refugees with life-saving assistance. That includes food packages, cash for work, hygiene kits, household supplies, and nutrition services for children and pregnant and breastfeeding women. Between August 2017 and August 2018, we also constructed 1,544 latrines and 83 deep tube wells, providing access to clean water and sanitation facilities for 154,000 people. We continue to advocate for the repatriation to Myanmar and the restoration of rights for all refugees in this crisis.

Let’s do this together. You can help refugees in Bangladesh and other parts of the world by donating to the refugee children’s crisis fund.