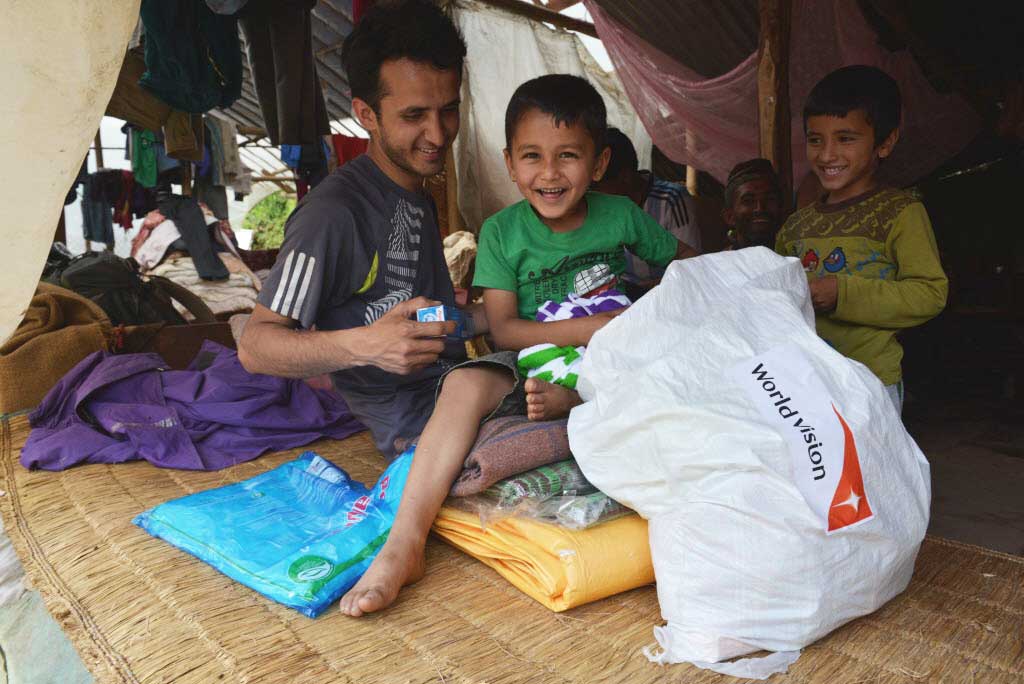 Deepak and his son open a relief supply pack at a World Vision distribution after being displaced by the Nepal earthquake. (©2015 World Vision/photo by Annila Harris)

It damaged or destroyed nearly 900,000 buildings, created avalanches in the Himalayas, and left almost 1 million children out of school. Major aftershocks, including a magnitude-7.3 tremor three weeks later, slowed recovery efforts and added to the devastation.

This was the deadliest disaster on record for the nation of 26 million people.

In the nine months since the catastrophe, World Vision has helped about 346,000 people with emergency relief. It plans to continue helping families recover and rebuild their lives into 2018.

As severe winter weather sets in throughout the mountainous country, an estimated 400,000 people living in high-altitude areas still need shelter and basic necessities like blankets, fuel, heaters, and household supplies.

Weeks of torrential rains in November caused the worst flooding the southern India city of Chennai has seen in 100 years.

The residents in the capital city of Tamil Nadu state were seen carrying belongings above their heads, walking through the streets chest-deep in floodwaters, while entire riverside settlements were washed away.

At least 379 people have died, including 54 in neighboring Andhra Pradesh state, where the floods also destroyed about 100,000 acres of crops worth almost $190 million.

The floods came on the heels of one of India’s longest heat waves in years, which claimed 2,000 lives in Andhra Pradesh and Telangana states.

In May, temperatures climbed to as high as 118 degrees Fahrenheit in the worst affected areas of Telangana, which includes the major city of Hyderabad.

Most recent reports indicate no deaths among children benefiting from World Vision sponsorship. U.S. sponsors support more than 10,000 children in the affected areas.

Typhoon Komen blazed through the Bay of Bengal over the summer, killing hundreds of people in Myanmar, Bangladesh, and India and lashing the region with monsoon rains. The ensuing widespread floods and landslides affected millions after destroying homes, crops, and roads.

Above-normal rainfall in January led to catastrophic flooding throughout Malawi and Mozambique, forcing hundreds of thousands of people out of their homes and killing at least 200, World Vision staff reported in early 2015.

Many more families lost crops and livestock. Roads, bridges, and water systems were damaged or destroyed. The effects were particularly bad in parts of Zambezia, central Mozambique, where raging floodwaters cut off access to remote communities.

World Vision provided food, tarps, household supplies, and clean water in Mozambique to about 21,000 people. Within two months of the disaster in Malawi, World Vision teams there had reached more than 90,000 people with relief and recovery supplies, including 8,874 children registered in its sponsorship programs.

Below-average rainfall over several planting seasons has caused crop failures and death of large numbers of livestock in Ethiopia, devastating the livelihoods of farmers.

Ethiopia’s government estimated in October that 8.2 million people need food assistance and predicted the numbers will increase in coming months.

As many as 350,000 children are already suffering from severe malnutrition. Another 700,000 moderately malnourished children and pregnant and breastfeeding mothers need supplemental nutrition now and into 2016.

While governments and humanitarian agencies rush to meet the immediate needs of children and families affected by disasters, World Vision also works year-round to help communities reduce risk and help themselves when disaster strikes.

“Working with communities for preparedness is key,” says Lawren Sinnema, a World Vision emergency affairs program officer. “Because while you can’t entirely reduce risk from disasters, you can alleviate their effects if you are prepared.”

Learn more about how World Vision responds to disasters.

When disaster strikes, World Vision is there. Help vulnerable families as they recover and rebuild.