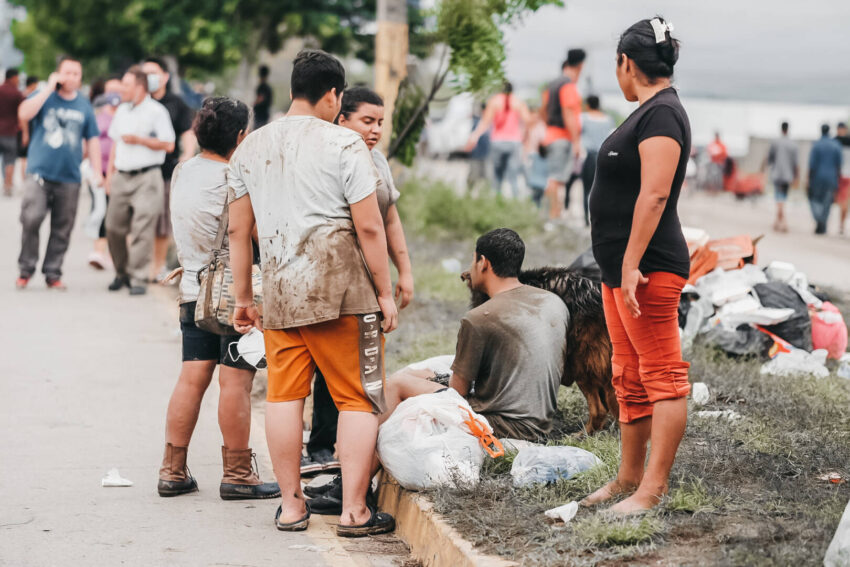 In Honduras, people stand and sit in the streets of Honduras in the aftermath of Hurricane Eta. Families who recently lost their homes have been sleeping along the streets. (©2020 World Vision/photo by Rafael Zaldívar)

Hurricane Eta ripped through Central America as a Category 4 storm with powerful winds of up to 150 miles per hour, unleashing heavy rains, flooding, and landslides. It then downgraded to a tropical storm as it churned toward the United States, hitting southern Florida and dumping more rain on already flooded areas. Learn the facts about Hurricane Eta, and join us in prayer for children and families affected.

Scores are missing and feared dead in Guatemala, where massive rain-fueled landslides buried homes in the central region of Alta Verapaz on Friday, November 6. At least 50 deaths have been confirmed in the country alone, according to the Associated Press.

“The initial estimate suggests 2,235,000 people may be impacted by the severe flooding,” says Joao Diniz, Latin America and the Caribbean regional leader for World Vision. “The flooding and winds have damaged roads, bridges, and communications infrastructure, isolating many communities.”

Amid the devastation in Central America, heroic scenes and survival stories surfaced:

“We will not leave the area until we rescue the last person,” Honduran President Juan Orlando Hernandez told reporters in Honduras, according to Reuters.

Eta is the strongest storm to impact the region since Hurricane Mitch in 1998, when thousands of people were killed in Central America, primarily in Honduras and Nicaragua.

Eta made landfall in Nicaragua on Tuesday as a Category 4 hurricane, the second strongest on the Saffir-Simpson hurricane wind scale, before weakening into a tropical depression a day later. The scale is a 1 to 5 rating based on a hurricane’s sustained wind speed.

Rafael Zaldívar, a World Vision staff member in Honduras, shares a firsthand account: “There are a lot of people sleeping by the edge of the streets and most of them don’t even have a pad. They are sleeping in nylon bags, which they use as a roof as well. The only clothes they have are the ones that they were wearing at the moment they had to leave.”

Government officials in Nicaragua and Honduras issued warnings for heavy rains and flooding, according to the National Hurricane Center. Eta also dumped heavy rains over the Cayman Islands, Cuba, and then Florida. Two deaths were reported in Nicaragua, and there were also reports of deaths in Costa Rica and Panama.

What is World Vision doing to help people affected by Hurricane Eta?

In addition to pre-positioned items in multiple Latin American countries, there are regional supplies housed in Panama, a country rarely hit by hurricanes but centrally located in Latin America. Examples of the materials include blankets, tarps, mosquito nets, water purification tablets, and Hygiene Kits.

World Vision is working to provide food and emergency aid to children and families affected by Eta in Honduras, Nicaragua, El Salvador, and Guatemala.

In Honduras, World Vision staff are responding to communities in the most affected areas with food, basic supplies, and logistical assistance. At least 50 families have received emergency kits in emergency shelters in Tegucigalpa. Food distributions for nearly 11,000 people are planned for five communities.

November 2 — It strengthens to a hurricane and intensifies to a Category 4 storm throughout the day.

How can I help people affected by disasters like Eta?

When disaster strikes, World Vision is there. Help us respond to disasters like Hurricane Eta.