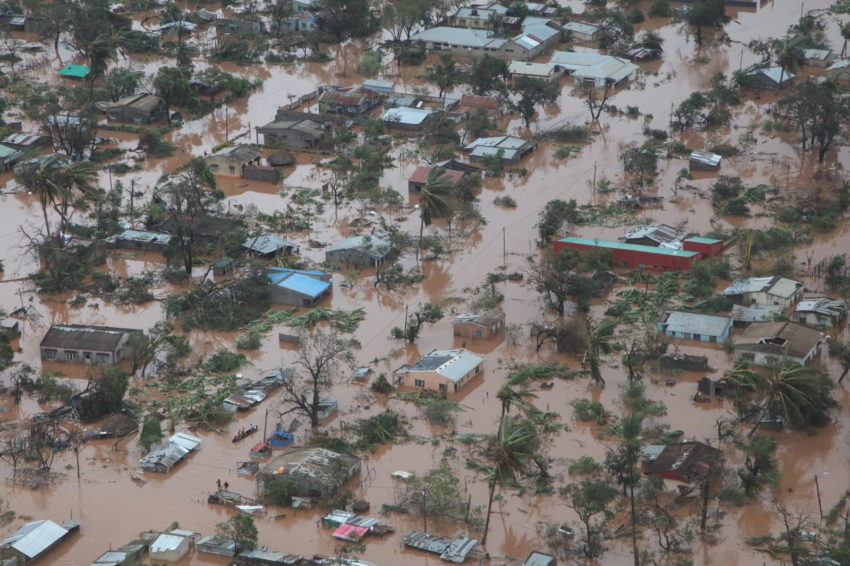 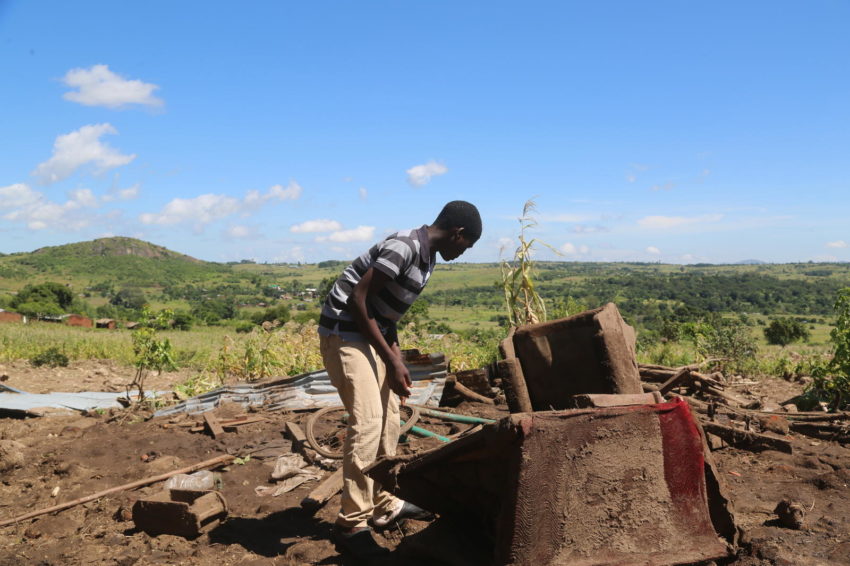 Geoffrey, 15, looks for items to salvage from his family's collapsed house. He and his five siblings were swept away in a mudslide when Cyclone Idai hit their home in Malawi. Their grandmother is recovering from injuries she suffered when she was buried in rubble. (©2019 World Vision/photo by Charles Kabena) 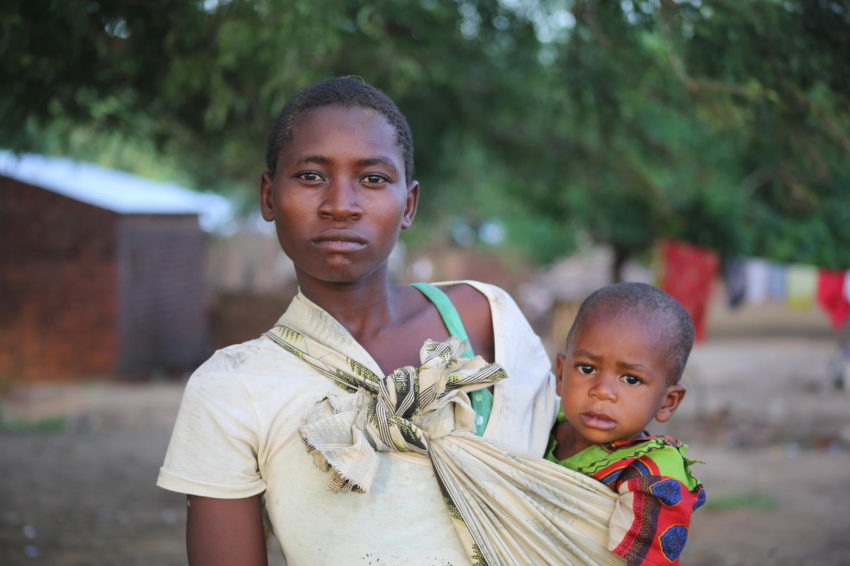 Ellen Hedimani held her son Timothy over her head to save him from flood waters that rapidly rose higher than her waist. While her family lost everything, Ellen, her husband, and their two children survived to start over. “Children are scared, hungry, and living without proper sanitary facilities,” says Hazel Nyathi, World Vision’s national director for Malawi. (©2019 World Vision/photo by Charles Kabena) 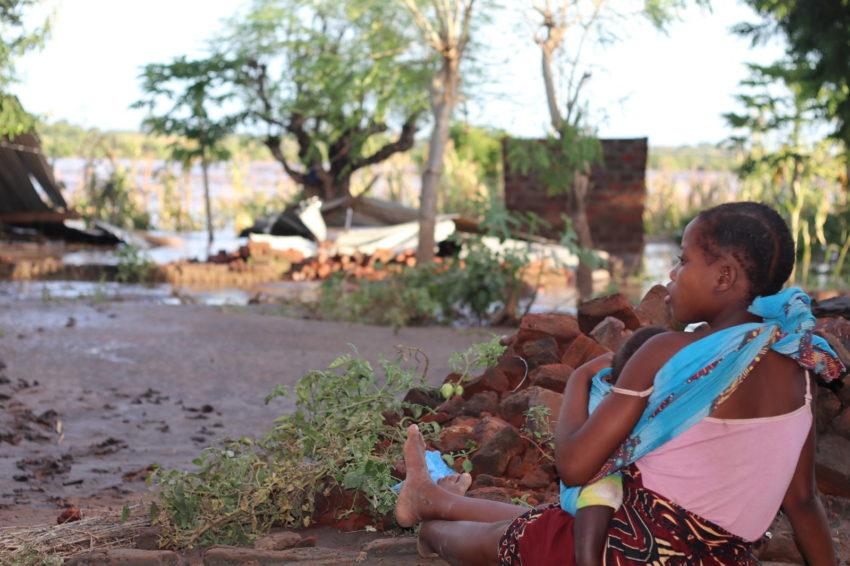 Maria, 16, holds her baby near the place where their house collapsed in Mozambique. Flooding due to Cyclone Idai has brought widespread destruction to Mozambique, Malawi, and Zimbabwe in southeast Africa. (©2019 World Vision/photo by James East) 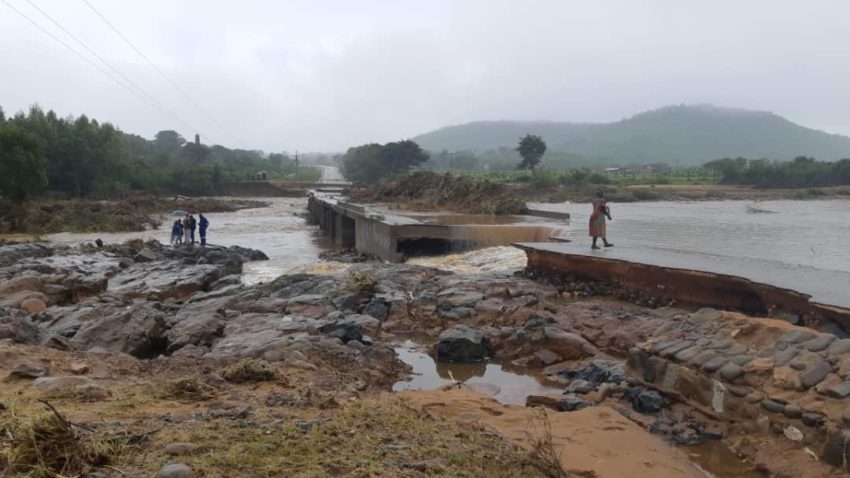 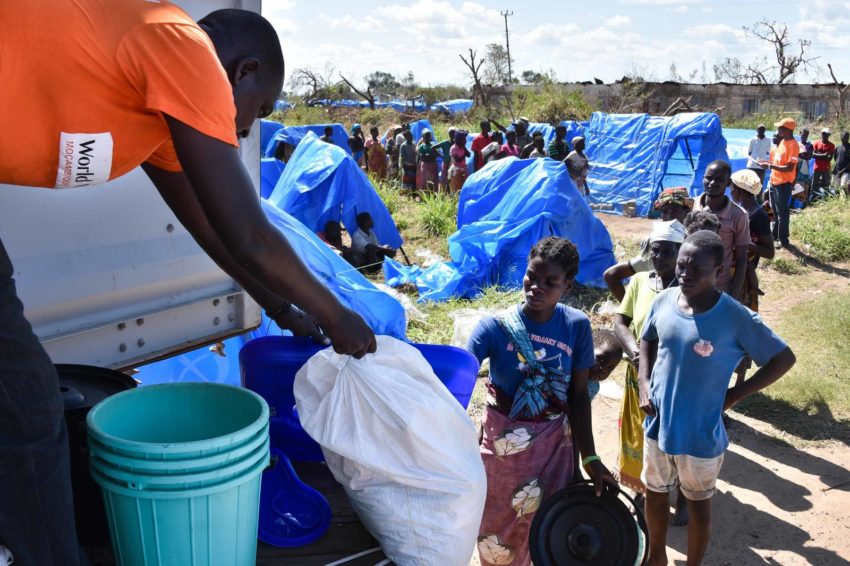 About an hour’s drive from Beira, Mozambique, where Cyclone Idai made landfall, 500 families receive household items they need to construct a shelter and set up housekeeping. The kits distributed by World Vision contain two tarpaulins, rope, three mosquito nets, a latrine cover, a 20-liter bucket and two five-liter buckets. Many families lost their homes and possessions when the storm hit and the area flooded. (©2019 World Vision/photo by James East)

Cyclone Idai made landfall near Beira city, Mozambique, on March 14, 2019, as a Category 2 storm. Its heavy rains and strong winds led to flash flooding, hundreds of deaths, and massive destruction of property and crops. Less than six weeks later, on April 25, Cyclone Kenneth dealt a hard blow to northern Mozambique about 600 miles north of Idai’s impact zone.

Catastrophic flooding from the two storms affected close to 2.2 million people in Mozambique, Zimbabwe, and Malawi. Idai and Kenneth were two of the top five worst storms to ever hit Mozambique. Together, they’ve caused an unprecedented amount of damage.

March 3 – The tropical disturbance that would become Cyclone Idai develops and begins to strengthen near the coast of Africa.

March 5 – Heavy rains cause severe flooding across Mozambique and Malawi.

March 11 – Now a tropical depression, the storm builds in intensity between coastal Africa and Madagascar.

March 20 – Heavy rains continue along with search and rescue operations and damage assessments.

March 28 – The Mozambique government calls off the search for survivors of Cyclone Idai.

April 2 – Cholera cases in Mozambique top 1,400, according to health officials.

FAQs: What you need to know about Cyclone Idai and Cyclone Kenneth

Find answers to frequently asked questions about the cyclones in Southeast Africa, including how you can help people affected by disasters.

Where did Cyclone Idai and Cyclone Kenneth develop?

Cyclone Idai developed in the Mozambique channel between Mozambique and Madagascar. Often, storms that develop there don’t strengthen as much as those that form north and east of Madagascar, but Cyclone Idai was fed by warm water temperatures.

Tropical Cyclone Kenneth formed north of Madagascar and the Mozambique Channel. Fed by warm ocean temperatures, it strengthened from a Category 1 to a Category 4 storm in the 24 hours ahead of making landfall on April 25.

Where and when did they make landfall?

Starting on the evening of March 14, Cyclone Idai made landfall in Beira, Mozambique, a coastal city of half a million people. The fierce storm pummeled Mozambique, Malawi, and Zimbabwe with strong winds and rains.

Cyclone Kenneth made landfall near Pemba, Mozambique, in the late afternoon of April 25, 2019, with sustained winds clocked at 140 mph. The greatest force of Kenneth was expended in a sparsely populated area, so the storm caused fewer deaths and less destruction than Cyclone Idai.

How much damage did the cyclones cause?

Cyclone Idai wiped out roads, bridges, and dams as it swept through Southeast Africa. The United Nations estimated that Cyclone Idai and subsequent flooding destroyed more than $773 million in buildings, infrastructure, and crops. More than 100,000 homes were damaged or destroyed.

Cyclone Kenneth is estimated to have destroyed about $100 million worth of homes, crops, and infrastructure, including boats and equipment belonging to coastal fishing villages.

What is the death toll from the cyclones?

More than 1,000 people died from Cyclone Idai and Cyclone Kenneth.

What’s the difference between a hurricane, typhoon, and cyclone?

Hurricanes form in the Atlantic and Caribbean, cyclones in the Indian Ocean, and typhoons in the Asia-Pacific region. Scientifically, they are all known as tropical cyclones.

How have people been affected by the cyclones and flooding?

Hundreds of thousands became homeless and displaced. Many people lost family members and friends and saw their communities devastated. Cases of cholera, malaria, diarrhea, and respiratory infections increased due to poor living conditions.

In cyclone-affected areas of Mozambique and Zimbabwe, about 3 million people still don’t have adequate food. Cyclone damage, drought, crop pests, and insecurity have contributed to their heightened need. About 75,000 people are still displaced from the cyclones and many lack basic services. Relief agencies are concerned that everyone obtains adequate shelter before the rainy season begins in November.

What is World Vision doing to help people affected by the cyclone and flooding?

World Vision is mounting a disaster response in Mozambique, Malawi, and Zimbabwe, where we already have operated for years.

Our initial focus is on food and nutrition, water and sanitation, household goods and shelter assistance, health, child protection, and education.

We’ve reached thousands of people in need and are helping them to recover.

Life frames: Our favorite photos of 2019