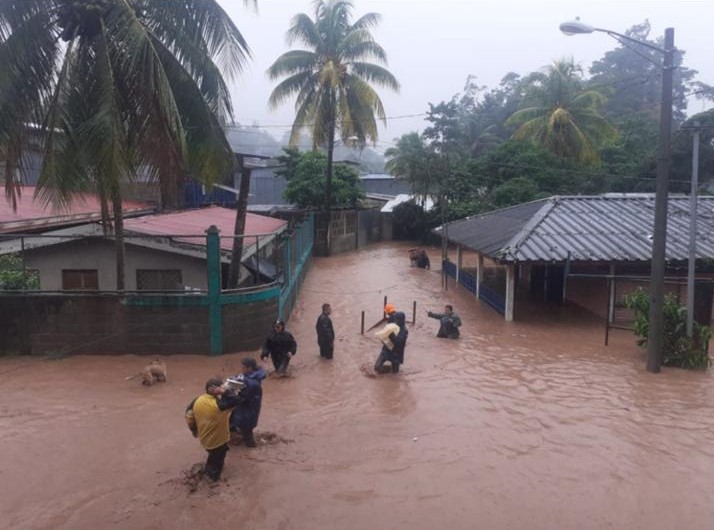 People wade through the flooded community of Wawashang in Nicaragua. Hurricane Iota made landfall Monday evening as a Category 4 hurricane, bringing with it floods, torrential rains, and mudslides. Hurricane Iota is the second powerful hurricane to hit Central America in two weeks. (©2020 World Vision/photo by Shanda Vanegas)

Hurricane Iota made landfall in Nicaragua as a Category 4 storm, with the Central American region bracing for potentially catastrophic rainfall, flooding, mudslides, a storm surge, and damaging winds. It’s the second major hurricane to hit the region in two weeks.

Learn the facts and frequently asked questions about Hurricane Iota. Please join us in prayer for children and families affected.

It’s a race against time for emergency workers to prepare vulnerable communities against the threat of Hurricane Iota, which made landfall Monday evening with sustained winds near 155 mph. Hurricane Iota’s landfall was located about 15 miles south of where Hurricane Eta made landfall earlier this month.

“We do not have much time,” says Jorge Galeano, national director of World Vision in Honduras and Guatemala. “Central America will be impacted again in the coming days by another storm, Iota, which will worsen already extreme survival conditions.”

Hurricane Iota intensified over the Caribbean, strengthening to a Category 5 hurricane on Monday as it neared Nicaragua and Honduras. The storm had sustained winds of 160 mph, as it was centered about 80 miles southeast of Puerto Cabezas, Nicaragua, and moved westward at 9 mph, according to the U.S. National Hurricane Center.

The region is recovering from Hurricane Eta, which made landfall as a Category 4 storm on November 3. Eta’s torrential rains caused massive flooding and mudslides. Scores have died and many more are missing in Central America. Search and rescue efforts are underway in communities devastated by the storm.

“The soil is already saturated, a mild increase in precipitations could be lethal and cause more flooding and landslides,” says Jose Nelson Chavez, regional advisor on emergencies for World Vision.

Hurricane Iota’s storm surge is expected to raise water levels by as much as 15 to 20 feet above normal tide levels in areas of onshore winds along the coast of Nicaragua and Honduras, according to Eric Blake, a hurricane specialist with the National Hurricane Center in Miami, Florida. He described Hurricane Iota as a “catastrophic situation unfolding for northern Honduras with an extreme storm surge of 15- to 20-foot forecast along with destructive winds and potentially 30 inches of rainfall, and it is exacerbated by the fact that it should make landfall in almost the exact same location that Category 4 Hurricane Eta did about two weeks ago.”

FAQs: What you need to know about Hurricane Iota

Explore facts and frequently asked questions about hurricanes and Hurricane Iota, including how you can help people affected.

Where did Hurricane Iota develop?

Hurricane Iota developed in the south-central Caribbean Sea on November 13 as a tropical depression.

Where is Hurricane Iota expected to make landfall?

Hurricane Iota made landfall Monday evening along northeastern Nicaragua. The Category 5 hurricane was downgraded to Category 4 right before hitting landfall.

How is World Vision responding to Hurricane Iota?

In addition to pre-positioned items in multiple Latin American countries, there are regional supplies housed in Panama, a country rarely hit by hurricanes but centrally located in Latin America. Examples of the materials include blankets, tarps, mosquito nets, water purification tablets, and Hygiene Kits.

World Vision’s already supporting communities affected by Hurricane Eta and is prepared to scale up response efforts following the impact of Hurricane Iota, which will affect many of the same communities.

How can I help people affected by Hurricane Iota and other disasters?

When disasters strike, World Vision is there. Help us respond to disasters like Hurricane Iota.