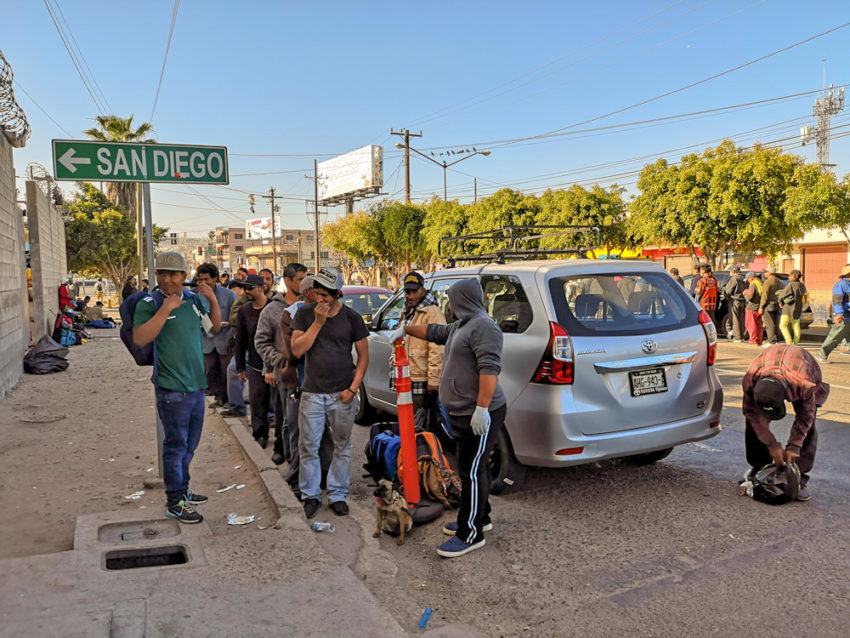 Central American migrants, mostly from Honduras, wait on the sidewalk for their turn to eat breakfast in a shelter World Vision helps run in Tijuana, Mexico. (©2019 World Vision/photo by Israel Carcamo)

Central America migration has greatly increased since 2012 and now includes not just adults seeking work, but also many families and unaccompanied children. Poverty, violence, lack of economic opportunities, and food insecurity are among the top reasons migrants cite for traveling to the U.S.

Increasingly, Central American migrants have chosen to travel in larger groups for safety. These migrant caravans include hundreds or thousands of people. The largest caravan so far originated in October 2018 in San Pedro Sula, a crime-troubled city in Honduras. By the time it reached Tijuana on the U.S.-Mexico border in November, the caravan had traveled nearly 3,000 miles, and 7,000 people had joined. Others from Guatemala and El Salvador joined along the way. Here’s a Google Maps perspective showing the likely path many of the migrants took:

FAQs: What you need to know about Central America migration

Find answers to frequently asked questions about Central America migration, and learn how you can help.

Where are Central American migrants coming from?

All three of the Northern Triangle countries rank among the world’s top 10 countries for homicides.

Why are Central Americans migrating to North America?

Many factors cause people to uproot their families. The most common reasons among Central American migrants can be food insecurity, political insecurity, violence, lack of economic opportunity, or a combination of some or all.

How many people are migrating from Central America to the U.S.?

There is no clear count of how many people are migrating to the U.S. from Central America. But the Migration Policy Institute says of the 3.4 million Central Americans living in the U.S., about 85% of them are from  Guatemala, El Salvador, and Honduras. At any given time, there could be thousands of people journeying north from their home countries. In November 2018, a “caravan” of about 7,000 people arrived at temporary shelters in Tijuana, Mexico, and Mexicali, Mexico, at the U.S.-Mexico border.

What is a migrant caravan?

A migrant caravan is a group of people migrating north from Central America with a goal of finding safety, political stability, or better economic opportunity in the United States. Most of the migrants come from Honduras, Guatemala, and El Salvador and many say they are fleeing violence, poverty, and persecution at home.

What are the recent migrants doing now?

Migrants are weighing their options. Some have accepted Mexico’s offer to provide a one-year humanitarian visa, allowing them to work legally. Others have accepted offers to be repatriated to their home countries. As many as 2,000 have registered to receive a hearing for asylum in the U.S. and will have to wait up to several months for their turn in immigration court.

Some others are choosing to cross the border and submit to border officials, potentially getting a chance to plead their case for asylum quicker. Those seeking asylum have a better chance of getting to stay if they are fleeing a legitimate threat back home, such as gang violence. They would be considered refugees. People are not granted asylum if they are simply seeking a better economic situation.

How many people cross the border?

In March 2019, the U.S. Border Patrol apprehended about 92,600 people at the border with Mexico. Over the past decade, the number of apprehensions at the U.S.-Mexico border has decreased significantly, from more than 1 million in fiscal year 2006 to just over 300,000 in fiscal year 2017.

What is World Vision doing to help at the Mexico-U.S. border?

Since late 2018, when the last large migrant caravan arrived in Tijuana, World Vision staff have been working with local faith-based organizations to help migrant families. We provide basic household supplies, support shelters that serve nutritious meals, and operate Child-Friendly Spaces. There, children have a safe place to, rest, play and learn.

What is World Vision doing in their home countries?

We have been working for decades throughout Latin America, including in Mexico, Honduras, Guatemala, and El Salvador, to help families and their communities address the root causes of poverty.

Because of child sponsorship, we are able to work with children and youth in some of the most vulnerable communities to specifically address the root causes of migration: violence, social exclusion, poverty, food security, clean water, quality education, and separation from family. World Vision helps people remain hopeful at home by partnering with churches, governments, local businesses, schools, and other development partners to provide a safer, more nurturing environment for them.

One program raising promise among vulnerable youth in Central America is Youth Ready. Through this approach, we help young people discover their potential, develop specific career and life skills, establish support networks, build character and confidence, and plan for their future. This work is made possible, largely because of child sponsorship. But many other programs like this are at risk if the U.S. foreign assistance budget gets cut.

How could World Vision’s work be affected by U.S. foreign assistance budget cuts?

The United States foreign assistance budget is at risk of significant reduction. This small 1% of the U.S. budget saves lives and helps improve safety, health, and opportunities for children around the world. It helps fuel many of our programs in Central America that make communities healthier and give youth and their parents hope as they work for a better future.

Without this funding, World Vision could lose multiple millions of dollars for work we’re already doing in vulnerable Central American communities. This critical work contributes to families deciding not to migrate north — to stay in their homes and invest in their communities.

In July 2019, the House of Representatives unanimously passed a bipartisan bill that would restore and protect foreign assistance in Central America for next year. The bill has yet to be introduced in the Senate.

How can I help?

Northern Ethiopia crisis: Facts, FAQs, and how to help