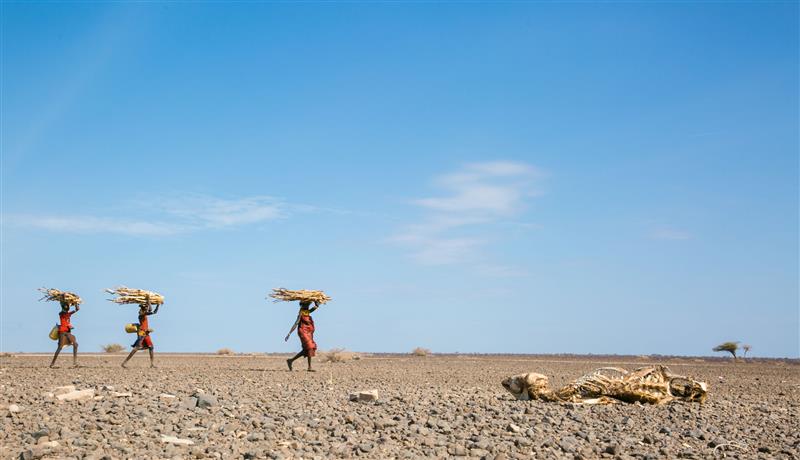 Drought and conflict are driving food insecurity and hunger in communities across Kenya. Many families have lost animals, crops, and livelihoods to the chronic drought, while conflict is causing a sharp rise in displacement. (©2022 World Vision/photo by Martin Muluka)

Globally, disasters have exacted a devastating toll on children and their families in 2022. The number of people in need of humanitarian aid has reached 324 million — across 63 countries — as of October 2022, according to the U.N. Office for the Coordination of Humanitarian Affairs.

Disasters — natural and manmade ­— can upend everything children and families need to survive ­and thrive in life. Protecting the world’s most vulnerable people has been at the core of our work for more than 70 years. Not only do we support people in their greatest hour of need, but we stay long term and help them recover and rebuild.

In 2022, we responded to 58 disasters in 57 countries, helping more than 31.1 million people with the relief aid they needed to survive. In the U.S., our emergency efforts supported over 80,000 people. In addition to these responses, we’re still reaching people with our ongoing global response to the COVID-19 pandemic.

Learn more about the world’s top disasters and ongoing crises of 2022, and join us in inspiring hope for children and families affected by these crises.

War in Ukraine: Displacement and refuge

The war in Ukraine has fueled the largest displacement crisis Europe has seen since World War II. The mass exodus of refugees has surpassed 7.8 million, according to the United Nations Refugee Agency (UNHCR). Since the escalation of conflict on February 24, 2022, the war has sent economic shocks and disruptions worldwide that continue to impact child poverty and a global hunger crisis today.

World Vision’s response to the Ukraine refugee crisis:  Since the escalation of war, we’ve been responding to the needs of refugees like 14-year-old Eugenia and her family. “When we were leaving, every­thing was usually like they show the war [on TV], shooting, bombing,” said Eugenia. “I was very scared. I didn’t know how I would be received.”

Eugenia, her mother, and two sisters are now in Romania, where we’re supporting host families and churches who are offering welcome and protection during this crisis.

As war continues, humanitarian needs are multiplying. In Romania, our staff have been working to provide hundreds of thousands of refugees with essential aid, including emergency food assistance packages and educational and psychological support. We’re also working with partners to support refugees in Moldova and displaced families in Ukraine, and through our staff in Georgia. We’re continuing to scale our response across the region, reaching more than 360,700 people with essentials in the impacted four countries. Our goal is to reach up to 1 million people, many of whom are children and women, with emergency supplies, shelter, access to clean water, education, child protection, and more.

Around the world, significantly more people are struggling to feed themselves than before the COVID-19 pandemic, according to the World Bank. In 2022, rising food prices driven by the war in Ukraine, persistent drought and extreme weather, conflict, and ongoing impacts of the pandemic have escalated the spread of hunger.

A humanitarian catastrophe is unfolding in the Horn of Africa, where the U.N. reports significant increases of severe acute malnutrition. “Overall, nearly 7.5 million children under 5 are estimated to be affected, including 1.85 million who are facing the severest form of the condition,” says a U.N. report from November 7. Child deaths in the region are rising.

In Somalia alone, about 6.7 million people face acute insecurity, and experts predict famine in two districts, Baidoa and Burhakaba — where at least 300,00 people are already living under “catastrophic” levels of food insecurity.

“When the children are hungry, they will start crying, asking for food and will not stop. When I have water, I give [it to] them to stop crying but it will be … a moment before they start again, demanding for food,” says Hawa, a 30-year-old mother living in an internal displacement camp in Baidoa, Somalia.

World Vision’s response to the global hunger crisis: We’ve launched our largest humanitarian undertaking ever in response to the global hunger crisis. Our goal is to reach 22 million people with life-saving aid in 26 of the hardest-hit countries. As of October 2022, we’ve supported more than 15 million people in 25 countries with the essentials they need to survive.

World Vision provides more than 1,000 life-saving meals every 60 seconds for people affected by disaster and conflict.

Children continue to suffer in Afghanistan. The country’s humanitarian crisis is one of the worst in the world, the result of conflict, poverty, natural disasters, and the continuation of the pandemic. Compounding the extreme conditions is a deepening hunger crisis. Winter will only make life worse.

“The saddest thing is to see a child going to bed hungry — let this not happen any more in Afghanistan. Give every child the right to live,” says Asuntha Charles, national director of World Vision in Afghanistan.

In addition, girls’ education suffered a devastating blow in March 2022 after the Taliban government reversed its decision to allow girls beyond sixth grade to attend school. World Vision is deeply concerned by the reversal of the promise to allow all children to attend school. Education is a fundamental right, including for adolescent girls. World Vision calls on the international community to make girls’ access to education a key condition of their engagement in Afghanistan.

World Vision’s response in Afghanistan: World Vision donors generously supported the Afghan people and our commitment to stay in Afghanistan to deliver critical aid during the country’s 2021 transition of power. Within a six-month period, between March 23 to September 30, 2022, we served more than 1.4 million people through life-saving aid and proven programs in areas such as food and nutrition assistance, healthcare, child protection, and water, sanitation, and hygiene.

Syrian children continue to pay the heaviest price since conflict in Syria began in 2011. Children and families have experienced immense suffering due to brutal violence that has killed hundreds of thousands of people, torn the nation apart, and set back the standard of living by decades.

As the Syrian refugee crisis is now in its 11th year, millions of children are experiencing a second decade of life immersed in war, violence, and displacement.

Now, a fast-paced cholera outbreak threatens the lives of thousands of children in northwest Syria. At least 20,000 suspected cases of cholera have been reported between August 25 and October 15, 2022, and of these, 26% are children under 5, according to the U.N. Children’s Fund (UNICEF). Cholera, an intestinal infection caused by bacteria, is often contracted from drinking unclean water. People with severe cholera can develop severe dehydration, which can lead to kidney failure and, if left untreated, shock and death.

“With a decimated health system, these children’s lives are in peril as medical treatment and capacities to respond to the current outbreak are scarce,” said Johan Mooij, World Vision’s response director. “There are 800,000 girls and boys at risk of hunger across the country who are malnourished, and 15% of those living in the hardest-hit areas in Northwest [Syria] are acutely malnourished.”

World Vision’s response to the Syrian refugee crisis: In Syria alone, World Vision has been delivering emergency water and sanitation supplies to displaced and host communities since 2013, providing water disinfection materials and healthcare support. In response to the cholera outbreak, we’re gearing up to support 27,000 people with the water disinfection and healthcare supplies needed.

Since the start of the crisis, we’ve helped more than 2.5 million people in the Middle East with healthcare, psychosocial support, supplies for cold winter months, education programs, food aid, and clean water, sanitation, and hygiene programs.

The humanitarian crisis in northern Ethiopia’s Tigray, Amhara, and Afar regions grew deeper and wider this year. Conflict has displaced more than 2.4 million vulnerable children and their families from their hometowns.

Before fighting broke out in November 2020, citizens struggled with decimated crops and an invasion of desert locusts, inflated food and fuel costs, food shortages, and a healthcare system overburdened from the spread of COVID-19. Ongoing conflict made matters worse with restricted delivery of aid, increased child protection concerns, food insecurity, malnutrition, and humanitarian needs.

World Vision’s response in northern Ethiopia: Since December 2020, World Vision has been responding to the humanitarian needs of people in northern Ethiopia. So far, we’ve reached more than 2.6 million people — 1 million of them children — through interventions in water, sanitation, and hygiene (WASH); food assistance; health, nutrition; protection; and shelter.

World Vision is also providing multipurpose cash assistance to the most vulnerable families affected by the crisis. Leteberhan, a 45-year-old mother, expressed gratitude for being able to nourish her five children. “Thank you very much for providing us with this cash support,” she says. “I will buy some foodstuff from the market to feed my children.”

One of the most powerful hurricanes to hit the U.S. in decades, Hurricane Ian devastated the state of Florida and its Gulf Coast on September 28, 2022, before making final landfall in South Carolina two days later.

Ian was the second-deadliest storm to strike the continental U.S. this century, behind Hurricane Katrina in 2005. The Category 4 hurricane claimed the lives of more than 100 people, many of them in Florida.

“[The area] experienced a lot of flooding from the [storm] surge. Families lost everything; all their belongings are on the side of the road. This is one of the worst catastrophic storms that I’ve seen in my lifetime,” said Pastor Frank Rincon of Bethel Assemblies of God Church in Immokalee, Florida. The church has served as a long-time partner with World Vision in helping support the community.

2022 marks the fifth year of the Rohingya refugee crisis. The Rohingya, a stateless population, have faced genocidal levels of violence, persecution, and human rights abuses for years.

Their largest exodus started in 2017, after mass atrocities in Myanmar forced the Rohingya to flee to neighboring Bangladesh. As of August 2022, more than 943,500 Rohingya are now living in Bangladesh, the site of the world’s largest refugee camp in Cox’s Bazar. More than half of the refugees are children.

“We were given shelter here in Bangladesh,” says Sowat, a Rohingya mother whose 6-month-old daughter, Ankis, was treated for malnutrition by a World Vision–sponsored clinic. “If agencies like World Vision had not come forward to save our children’s lives, we would have been crying in the wilderness, watching their sufferings. The support we have received is an endless blessing for us and our children.”

World Vision’s response to the Rohingya refugee crisis: Our work in Bangladesh reaches about 5 million children and adults. We’re also caring for about 500,000 people in 21 refugee camps and 150,000 in neighboring host communities through food; nutrition; water, sanitation, and hygiene; and education.

Children continue to suffer in Yemen. The dire humanitarian crisis in Yemen, caused by the continuation of war since early 2015, is among the worst in the world.

Amid these extreme challenges, children like 11-year-old Yaslame still see hope: For her, it comes from relief efforts in her community in Yemen. “The doctors of the health team that came to our village have cured my brother and sister,” she says. “They are always nice to us, and they taught our mother how to keep us safe from diseases. I want to be the one to help our village as the doctors did to us.”

World Vision’s response in Yemen: Since 2019, World Vision has been working through partner agencies in remote communities in southern Yemen, where conflict, alarming levels of food insecurity, and health threats persist. We’ve reached tens of thousands of people with improved access to emergency health and nutrition aid programs. In addition, we’re continuing to support healthcare centers and mobile health clinics.